When John and Ginger Laytham open their Nantucket house every summer, it’s no wonder they revel in simplicity: harvesting mussels for fresh paella, pulling out their day sailer for an afternoon on the water, watching their granddaughter bicycle on the crushed-shell road. The rest of the year, Laytham, as president of Clyde’s Restaurant Group in Washington, D.C., oversees 14 restaurants with 2,200 employees. Most of the year, the couple’s days are a foggy blur; coming to Nantucket puts everything into full-color focus.

When summer days are this timeless, there is nothing like celebrating them in a house with centuries-old roots, situated on an island so dedicated to architectural purity that its entirety is a National Historic Landmark. “It’s a really laid-back lifestyle on the island,” John says. “It’s great.”

The Laythams’ Nantucket house, named East Light, is actually two houses conjoined in beautiful matrimony: an 1810 Greek Revival farmhouse that was originally built in Chelsea, Vermont, and a 1790 Cape-style cottage that had been stored in pieces for years on Nantucket. The resulting home, completed with meticulous period architectural detailing, is perfectly at home in the island community of Siasconset, which was settled in the 1600s as a whaling outpost. 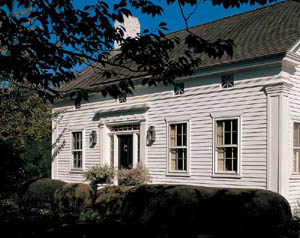 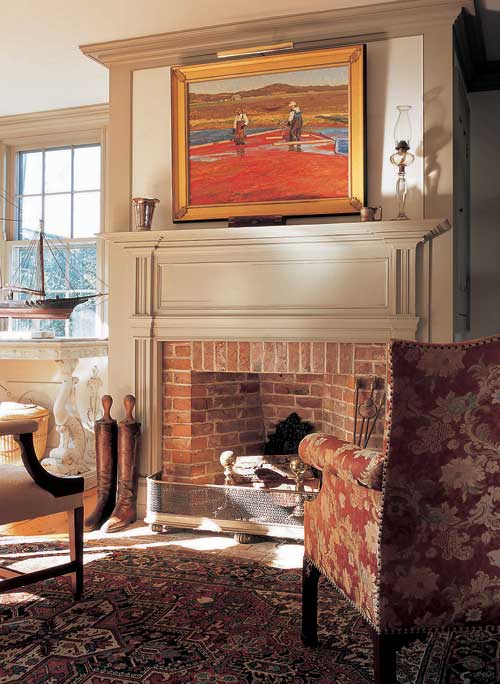 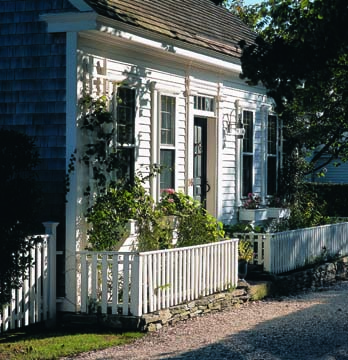 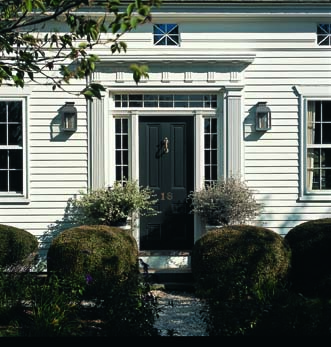 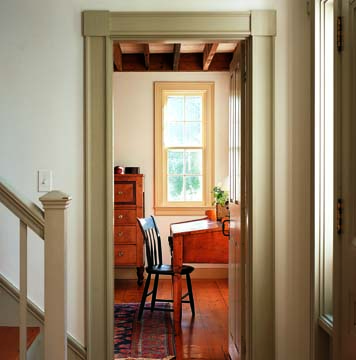 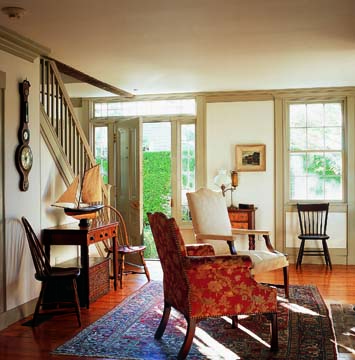 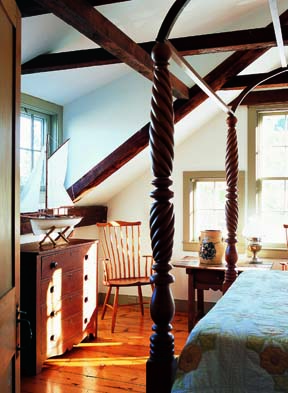 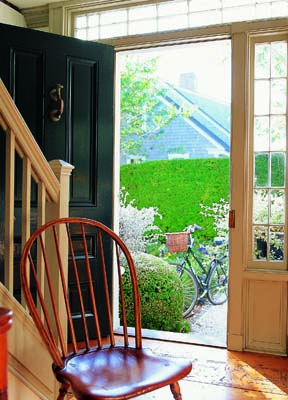 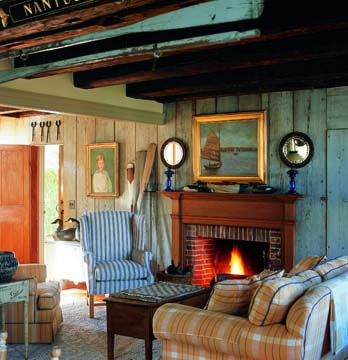 For the Laythams, there is only one team that could have pulled off this glorious feat: Gregory and Carolynn Schipa, owners of the Weather Hill Company in Charlotte, Vermont. John Laytham and Greg Schipa have known each other since their days at Georgetown University and have collaborated on several of John’s restaurants and homes. From the beginning, the couple wanted the Schipas on board. Says Ginger, “We knew there was no one else we’d want to do this restoration other than Gregory and Carolynn. From the bottom of my heart, from the first meeting to the last, it was a delightful experience.”

“They wanted a really special house,” Greg Schipa recalls. It would seem to be a fairly straightforward premise. But combine that wish with Nantucket’s extremely strict design control and the island’s relative isolation, and things could get sticky. Pulling this off was not for the faint of heart.

The project began with the classic puzzle that often confronts historic houses undergoing reconstruction. Greg Schipa found the structure that became the main house, an antique post and beam home structure, in Vermont. “After 200 years, you can imagine how run-down it was,” Greg says. In fact, the house was condemned and about to be torn down, which gave the Schipas an added purpose. As John Laytham says, “Greg made it a goal to save as many of these houses as he could.” As is usually the case with craftsmanship of this caliber, the Schipas relied on expert help, including two of their partners: Rick Tintle, owner of the Weather Hill millwork shop, and Harrison Snapp, a Weather Hill construction supervisor.

Greg Schipa had the house—including the frame, antique wide-plank flooring, doors, mantels, stairs, and glass—disassembled and had the pieces piled into a tractor trailer and then onto a ferry for transport to the island. “It looked like Lincoln Logs,” he recalls. Greg stored the pieces until he found the second structure, a 1790 Cape-style house on the island, which became an ell attached to the back of the house. A combination of salvaged period materials and reproduction pieces marries the two structures to render a beautiful, cohesive whole. A portion of the half-acre property holds a guest house and swimming pool.

The interior of the house strikes that elusive balance of spaciousness and warmth. Ginger Laytham reflects on her original wish for the great room, housed in what was the Nantucket cottage: “We wanted the feeling both of intimacy and of space. I was having a hard time visualizing how it would work. Greg was able to architecturally accomplish it.” Greg Schipa worked the magic by moving the chimney, which had been in the center of the room, to the north wall. A background of wide-beaded pine paneling and an antique mantelpiece give the fireplace the look of fine art. Plaster walls above the wainscoting are whitewashed with a 3/8″ skim coat. The white reflects the hues of the woodwork: gray here, pewter there.

Considering the Laythams’ professional lives, the kitchen is naturally the hub of the home. “We love the kitchen,” John says. Countertops are cherry that was oiled many times, resulting in a sheen so deep that it tells a story all its own. John remembered soapstone sinks from his childhood in Pennsylvania and knew that one would be a perfect fit in the Nantucket kitchen. As he explains, “It has a much more wonderful feeling than stainless steel would.”

A guest cottage in back, named Lily, is more rustic. The intimate space is centered around the fireplace, with its original mantel backed by blue milk-painted boards, which John found in Virginia. John’s collection of antique decoys from the 1920s to 1940s adorns tables. Except for new sofas, both structures are furnished with antiques, many from Nantucket auction houses; similarly, much of the artwork is by island artists.

For Greg Schipa, creating houses like that of the Laythams is part of a bigger picture. “We try to save the craftsmanship of the houses that were built in the past,” he says. “We’re trying to save not only heritage but the things that matter.” It fits nicely with his and Carolynn’s life philosophy of relying on time-proven ways and adhering to the “slow living movement,” as it has come to be called. “It’s the resistance of fast food and the cheap instant gratification of modern society and a focus on things of real value,” Greg states. “That jives perfectly with John’s attitude about his restaurants.”

The Laythams embrace their own version of the slow living movement, Nantucket style. Recent health problems impressed on John just how important it is to really stop, look, and listen to life. “When I had my health issues a couple of years ago, I didn’t get to spend as much time on Nantucket,” he says. It made him realize how important his and Ginger’s annual forays to the island are.

It’s about getting back to things that matter. For John, some of the best nourishment is cooking in his Nantucket kitchen. “I’m not a go and lie on the beach person,” he explains. “One of my favorite things is taking the time to go to the farm and get the vegetables for the day, dig for my own clams and mussels, and cook all day. It’s so great when you can get your own food.”

All images are from Russell Versaci’s Creating a New Old House (Taunton Press, 2003).