“We first got bitten by the old-house bug back in 2002 when my husband was stationed in Oklahoma,” explains Kelly Priegnitz, a healthcare attorney. The busy careers of Kelly and her husband, Elmer, now retired from the Air Force, caused them to relocate often. In 2013, work took them from New York to Louisville, Kentucky. After spotting a handsome red brick Federal online, they “flew in, took a look and fell in love.” Within days, the old house in rural Cox’s Creek was theirs.

“We like original features and architecture, and the Samuels Home was virtually untouched.” That is, perhaps, an understatement. The ca. 1820–40 house had never been fitted with heating and air conditioning, the cellar floor was mud, and there was just one bathroom for five bedrooms. With five boys (including triplets), hectic careers, and frequent moves, this was a couple who could handle a challenge! The important thing for Kelly and Elmer was that the house remained extraordinarily intact. Floor plan, hardwood floors, woodwork, seven fireplaces, grain painting and marbling, hardware—all preserved. It sits proudly on a couple of wooded acres in bucolic rural Kentucky, surrounded by horse pastures.

“We like original features and architecture, and the Samuels Home was virtually untouched.” That is, perhaps, an understatement. The ca. 1820–40 house had never been fitted with heating and air conditioning, the cellar floor was mud, and there was just one bathroom for five bedrooms. With five boys (including triplets), hectic careers, and frequent moves, this was a couple who could handle a challenge! The important thing for Kelly and Elmer was that the house remained extraordinarily intact. Floor plan, hardwood floors, woodwork, seven fireplaces, grain painting and marbling, hardware—all preserved. It sits proudly on a couple of wooded acres in bucolic rural Kentucky, surrounded by horse pastures.

In and of itself, the house was an extraordinary find. Then there’s its history. Kelly and Elmer thoroughly research their homes, but this time the paper trail was fleshed out by a stream of visitors. “People would just drive up to the house and bring pictures and documents, or tell us crazy stories about growing up here.” One visitor was Bill Samuels Jr., scion of the Maker’s Mark bourbon dynasty. Samuels confirmed what their research had told them: The land on which their house stood had been granted by Corn Writ in 1784 to Bill’s ancestor Robert Samuels Jr. of the Pennsylvania Militia. After the Revolutionary War, Captain Samuels was contracted by George Washington to make whiskey for the Army. Eight generations later, the Samuels family and bourbon are synonymous.

It was the Captain’s grandson Wilson Samuels who built the current house. “Wilson and his wife had six or seven kids, and one of those boys carved his initials all over the place,” Kelly laughs; “in the carriage house, on the windowsill, on a post on the porch, in the attic.” But the most famous carved initials may belong to someone else: Jesse James. Samuels’ home was a known refuge for the James boys and their gang; the two families were related by marriage. The outlaw scratched his initials and a date into a pane of glass in the living room, since removed to go to a local historical society.

Bourbon and bandits make for a pretty heady brew. But just as the barrel in which whiskey ages has a lot to do with its final flavor, this evocative old house has distilled its past into something more rare: the other kind of spirits. 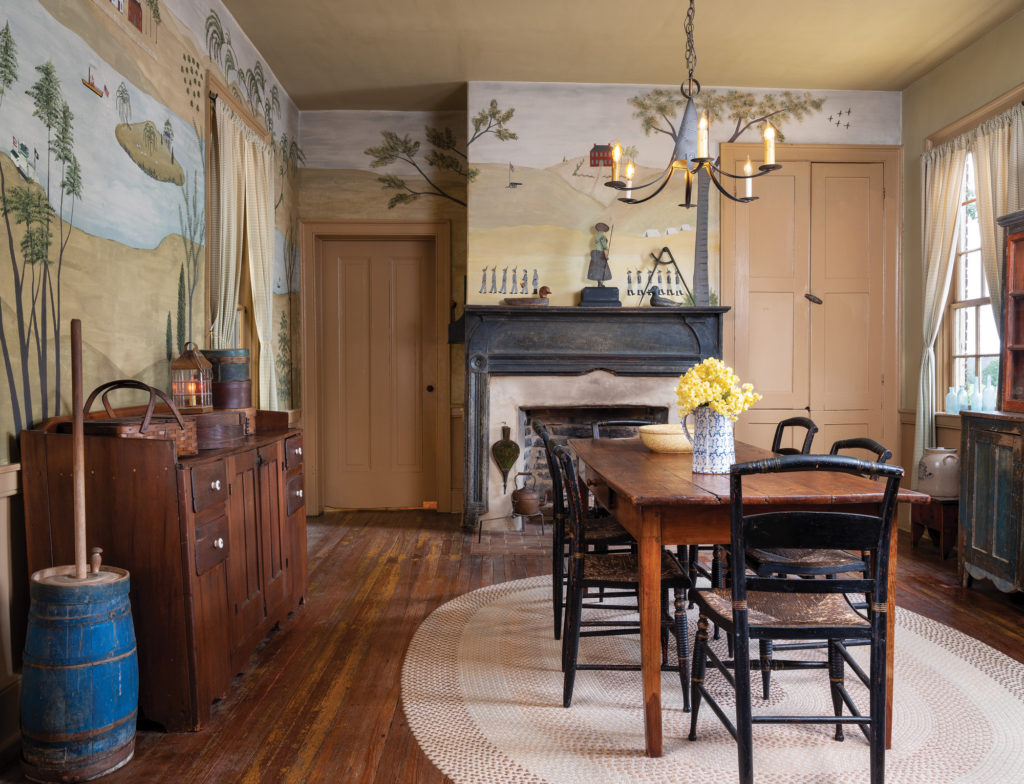 “The house is haunted,” Kelly says matter-of-factly. Distinct, loud footsteps coming up the stairs; sudden and overwhelming smells of cigar smoke; lights and television turning themselves on and off . . . the list is lengthy. “Since the main floor of the house is heated solely by fireplace, we keep the doors closed when evenings are cold. We’ll watch the doorknob turn and rattle, and the door opens.” Their triplets moved in several months after Kelly, after the school year was over. “Their rooms are in the more ‘active’ part of the house, and they started to sleep with their Bibles next to their beds.”

Perhaps it’s a mischievous Samuels, or Jesse James, restive over his untimely death. Or maybe the past is paying homage to the Priegnitz family—who have revitalized the old homestead and filled it with period furnishings. Whatever it is, Kelly and Elmer are unperturbed. They know how to handle a bunch of high-spirited boys.

The can-do Priegnitz energy would be admired by the Samuels pioneers. The house was restored with sensitivity, but occasionally a crowbar or hammer has been involved. The couple discovered a fully intact hearth with a pot-hanger behind a layer of cement, they shifted all the limestone-block exterior stairs to excavate two centuries of artifacts, and they explored space behind a mantel and the wall to uncover more treasures.

“The entire house is decorated in period furniture, which drove our kids crazy as they were growing up.”

They did eventually install hvac so that the upper floors have heat and air, but concealed the unit in a knee wall on the second floor. The first floor and cellar (converted into livable space) are entirely heated by gas fireplace. The kitchen fireplace remains wood burning. A wall still separates the travelers’ bedroom from the rest of that floor.

“We believe in keeping the house as much in its original character as we can,” Kelly says of their “preserve and polish” approach. Sometimes the best way to make your mark on an old house . . . is to not leave a mark.

Kelly and Elmer Priegnitz believe firmly in minimizing the impact of modern comforts on their old house. For that reason, they chose a tankless water heater. “We love it,” Kelly says. “It heats the water much more quickly and efficiently, and it’s also a space saver.”

For homeowners, tankless heaters provide advantages. Number one is probably space. A traditional water tank holds 40 to 60 gallons, while the wall-mounted tankless water heater is generally less than half the size. Reduced energy consumption is another consideration: In order to provide on-demand hot water, standard storage tank heaters work to constantly keep water hot. Tankless ones also provide hot water on demand, but through an initial draw of energy. And although the upfront cost of a tankless heater is greater, their lifespan is almost double and energy savings indisputable.

Sound like a no-brainer? It’s a little more complicated for old-house owners. Plumber Corey Szczesny of Szczesny Home Improvements in East Aurora, N.Y., cautions: “Tankless uses less energy overall, but the initial demand when the hot water gets turned on is huge. Old-house gas lines just weren’t meant for that.” The cost of retrofitting gas lines therefore becomes a factor in overall cost. “Otherwise it’s like trying to cook a steak with a BIC lighter,” Szczesny explains. He notes that it’s wise to consult a professional plumber to determine what’s best for your household size and needs.

Catherine Lundie is a happily incurable old house addict. Lundie is the editor of Restless Spirits: Ghost Stories by American Women, 1872–1926. She holds a PhD in English with a specialization in 19th Century American culture and literature.