Time moves slowly in Columbus, Mississippi, a small town in the heart of the South. Gene Imes was born and raised here; he remembers riding horses in the pastures around Rosedale—an imposing country mansion that hadn’t changed since it was built in 1856. Designed in the picturesque Italian Villa style following an architectural plate from Samuel Sloan’s 1852 pattern book Victorian Buildings, it has bracketed eaves, arched windows, and a square tower (based on the classic Italian campanile, or bell tower).

Who could resist the challenge? Finding a soaring campanile, the grand entry hall, 14-foot ceilings, and separate parlors for ladies and gents, the owners felt a calling to restore the 1856 villa, right down to finishes and furniture.

When Gene and his wife, Leigh, were house hunting in 1997, they revisited the villa, and knew “this was it” even as they ascended the front steps. Still painted in its original rosy tan, the house welcomes visitors into an arched entry hall with a soaring ceiling and a sweeping staircase. Traditional ladies’ and gentlemen’s parlors on either side of the front hall, a library, and a formal dining room would provide ample room for entertaining. Upstairs, each of four spacious bedrooms has its own sitting area and marble mantel. A third-floor aerie in the tower affords 360° views of the bucolic countryside. In fact, the view had not changed in 150 years: one can see to the Tombigbee River, a half-mile away.

Sturdily built with 18-inch brick walls, the house was solid but needed new systems, a process that occupied the first three years of restoration. New wiring was run in metal conduits notched into the brick walls; new heating and air conditioning systems were installed; all of the plumbing was replaced. The original walls and ceilings were patched or replastered, their original mouldings conserved. The house had had a standing-seam metal roof, but unfortunately it hadn’t been installed correctly and eventually was replaced. Leaks delayed upstairs restoration for several years.

Today, the formal dining room is opulent, papered in Zuber’s ‘“Irisé Bicentenaire’, an undulating, green-and-gold rainbow that sets off the rich walnut woodwork and furnishings. Mirrored buffets are now crowded with sparkling, 19th-century silver and multi-color art glass, as they would have been in the Victorian period. 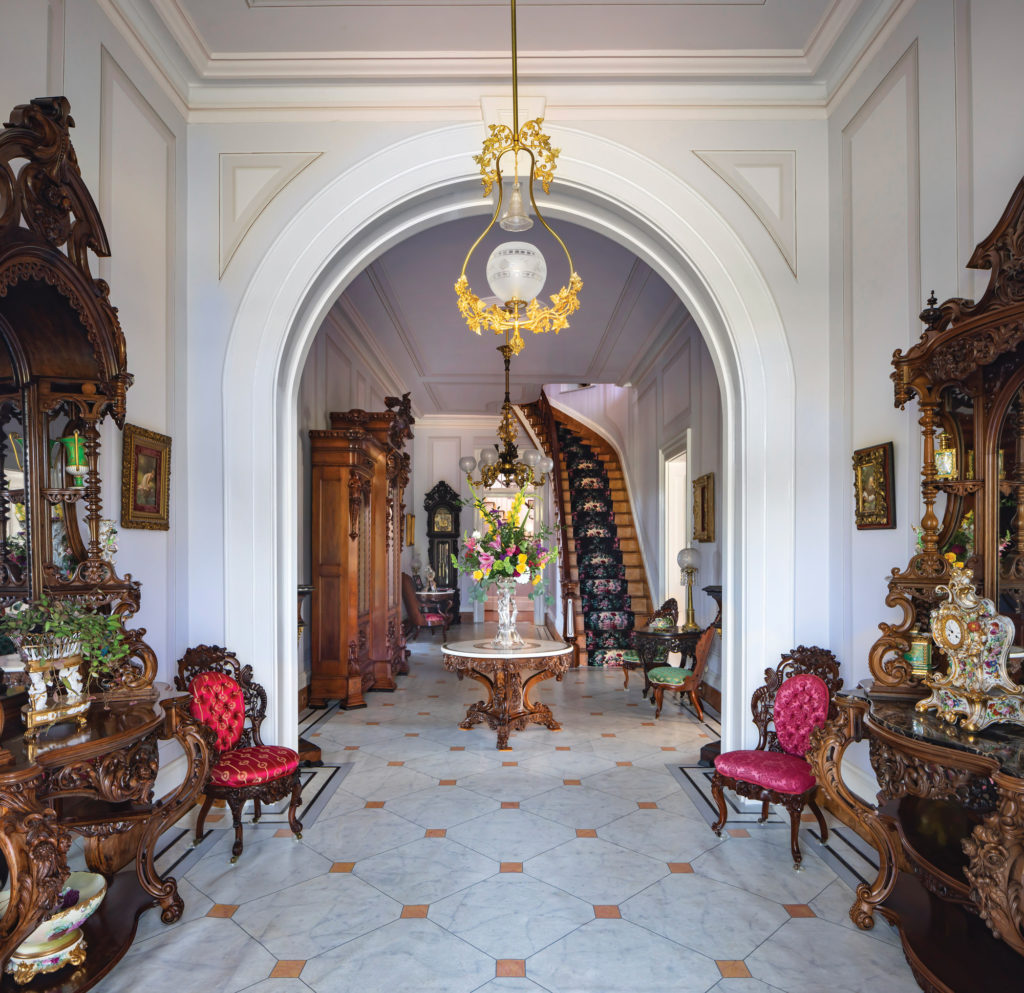 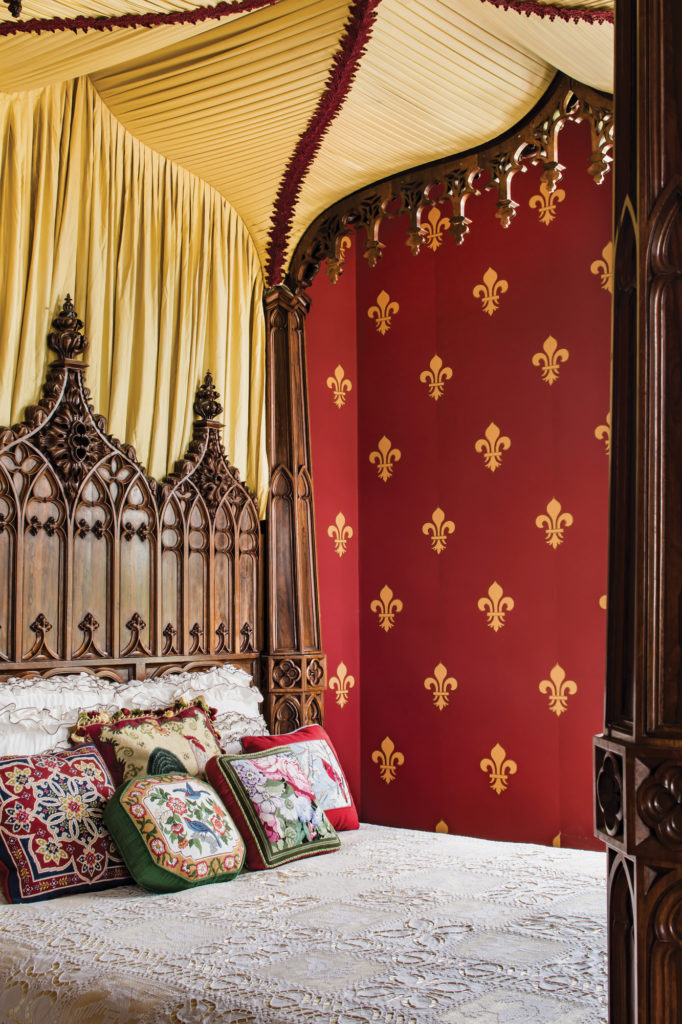 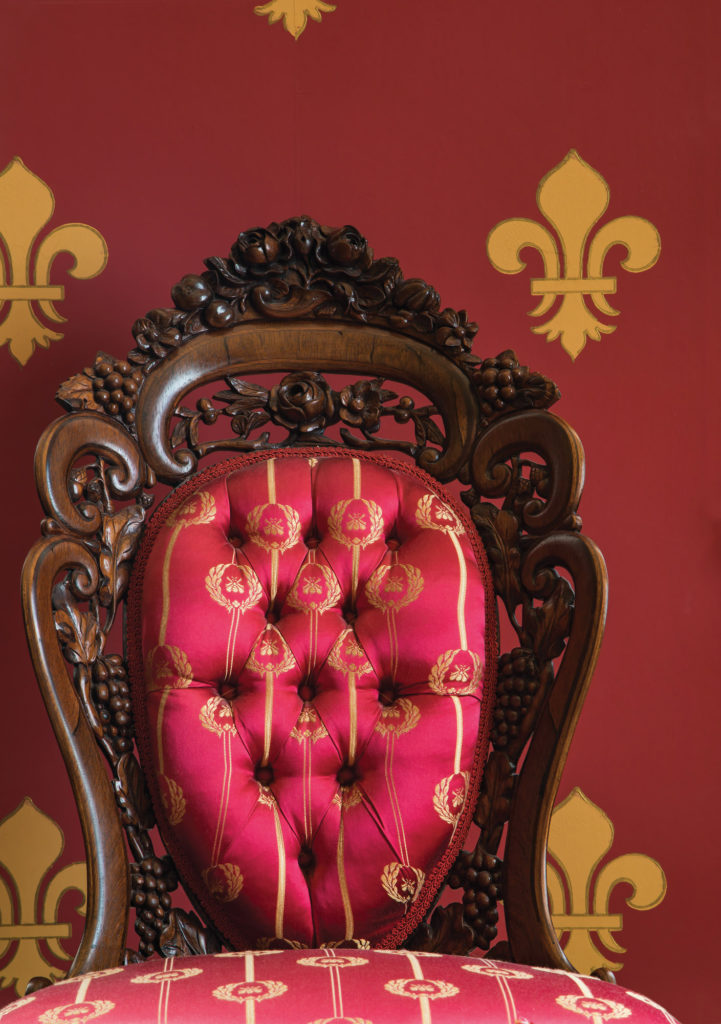 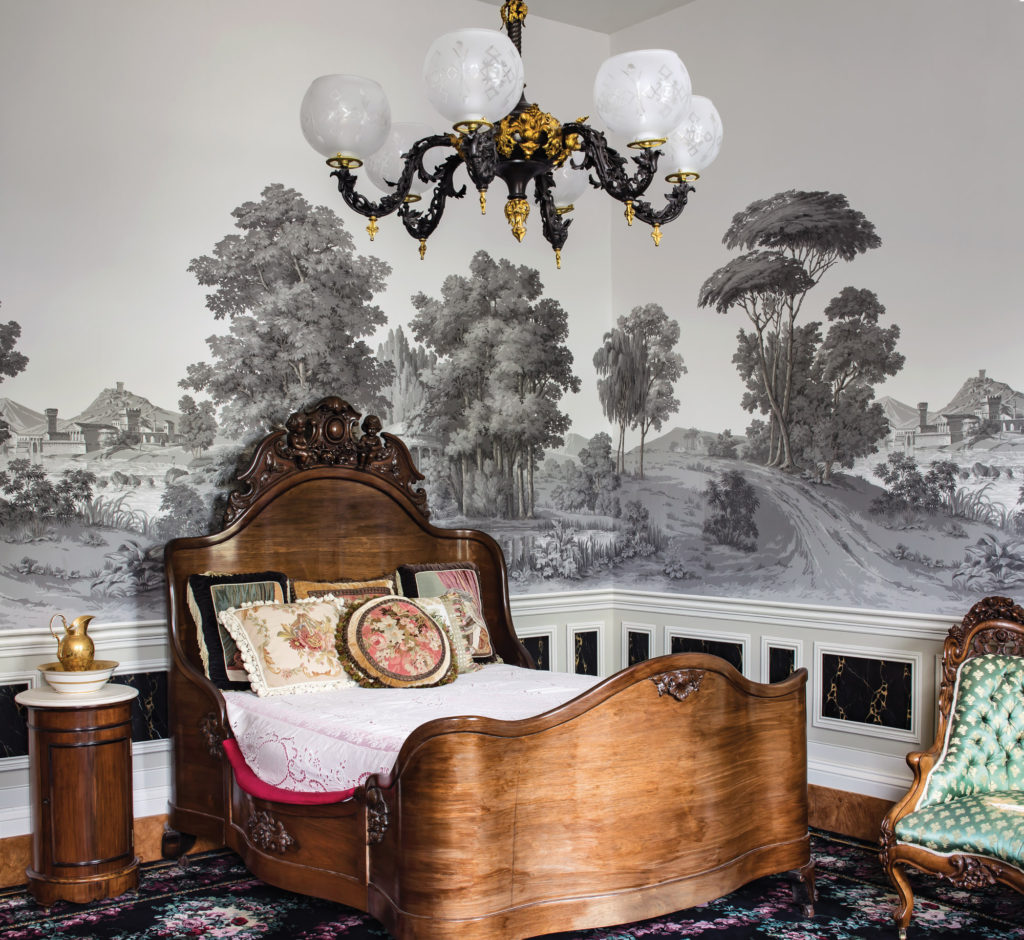 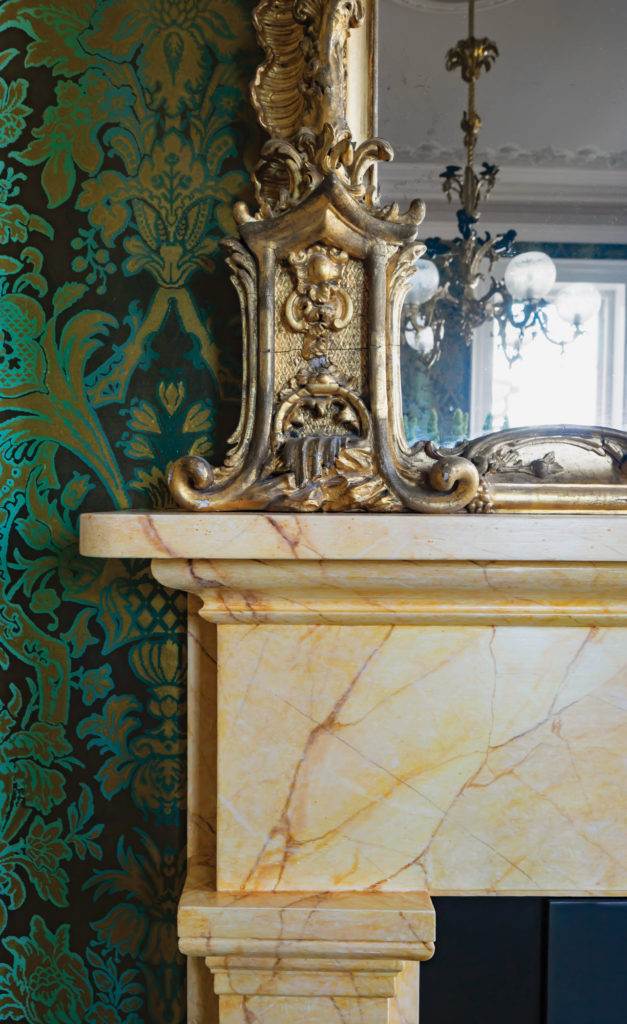 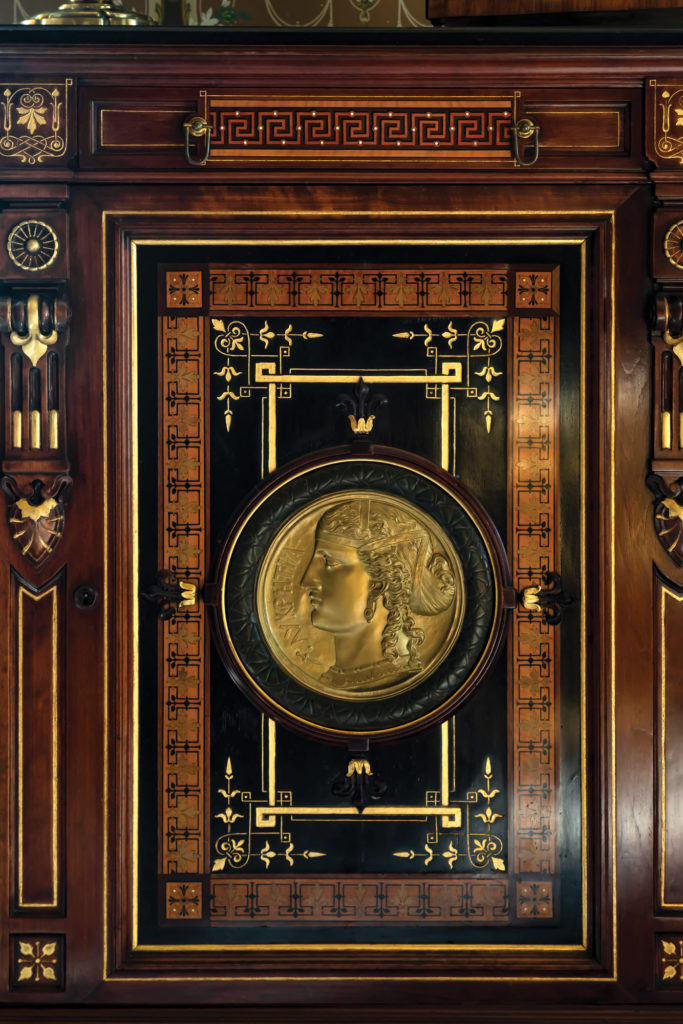 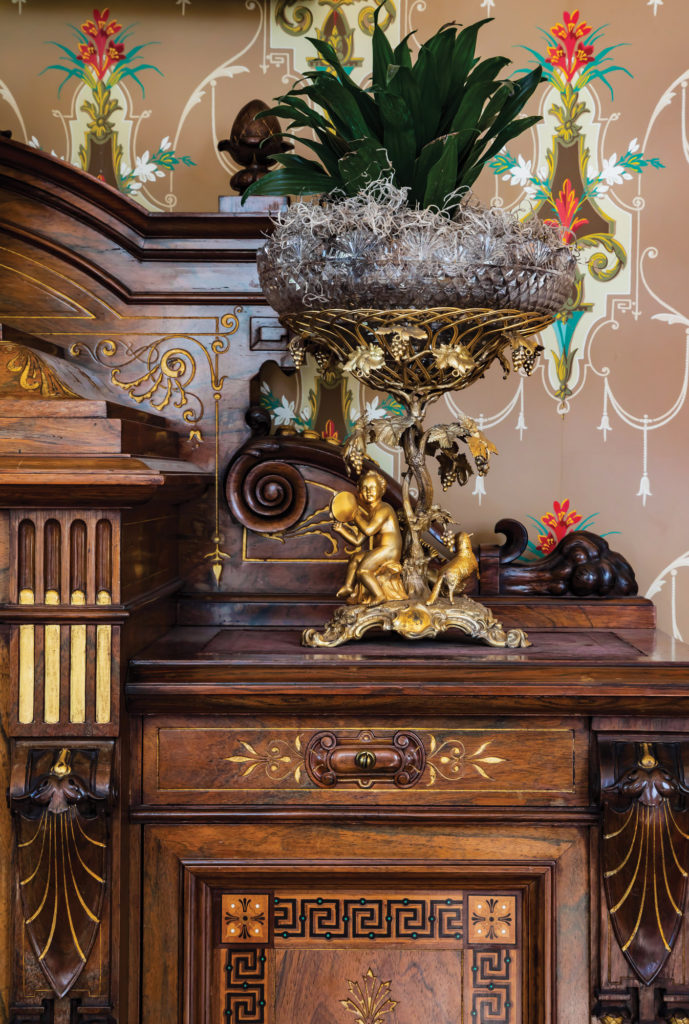 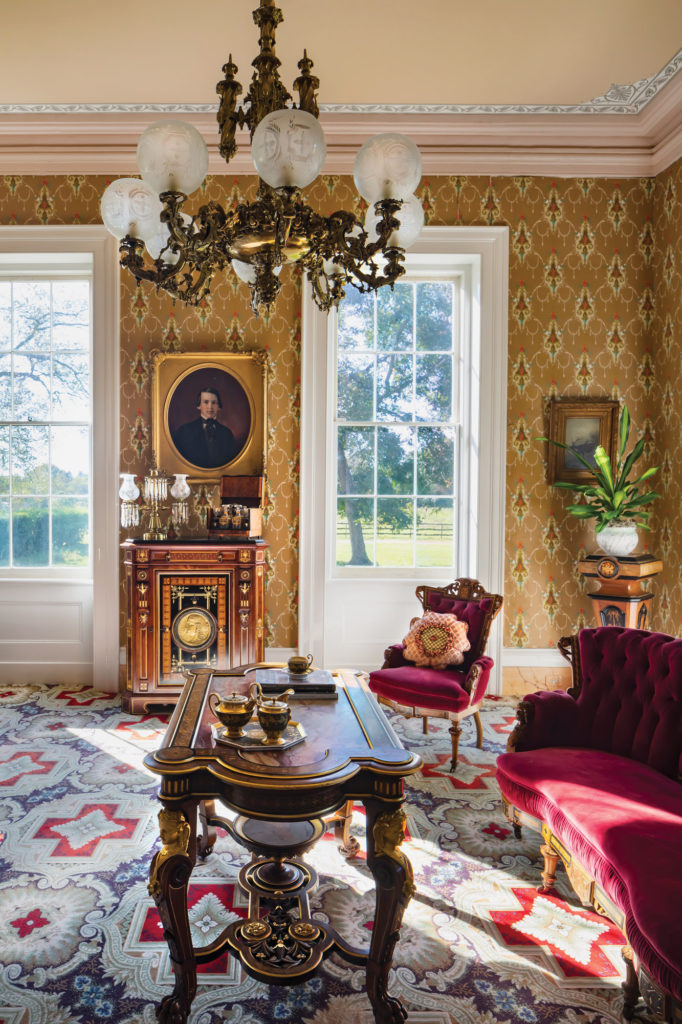 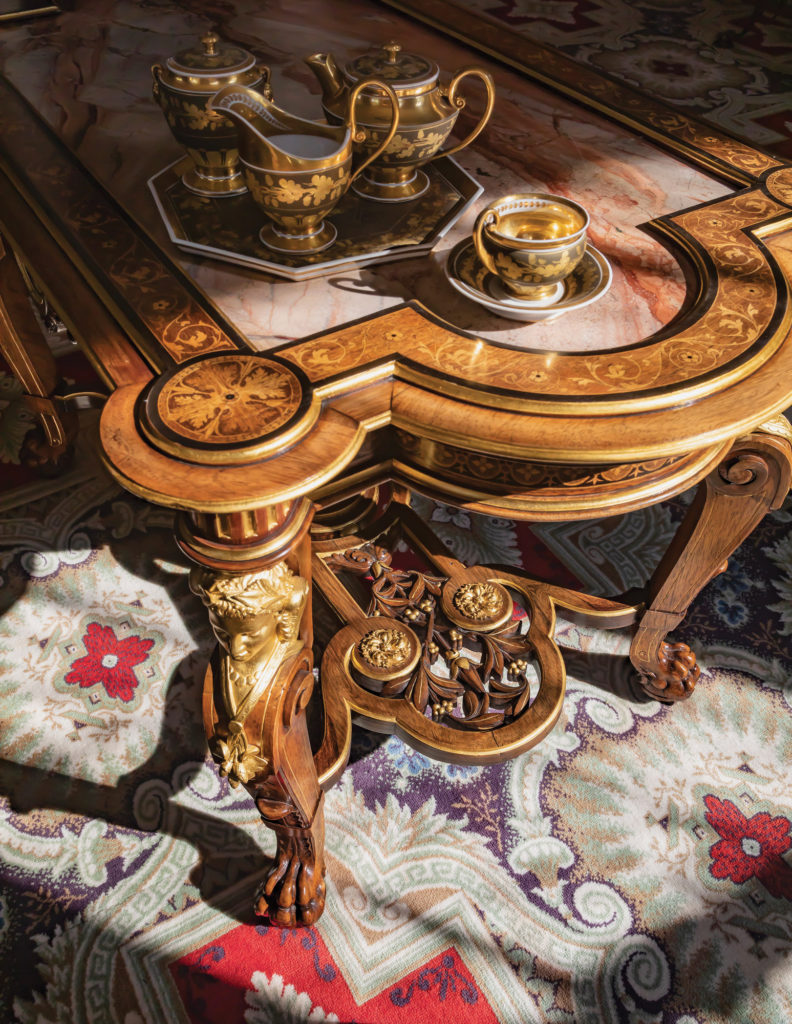 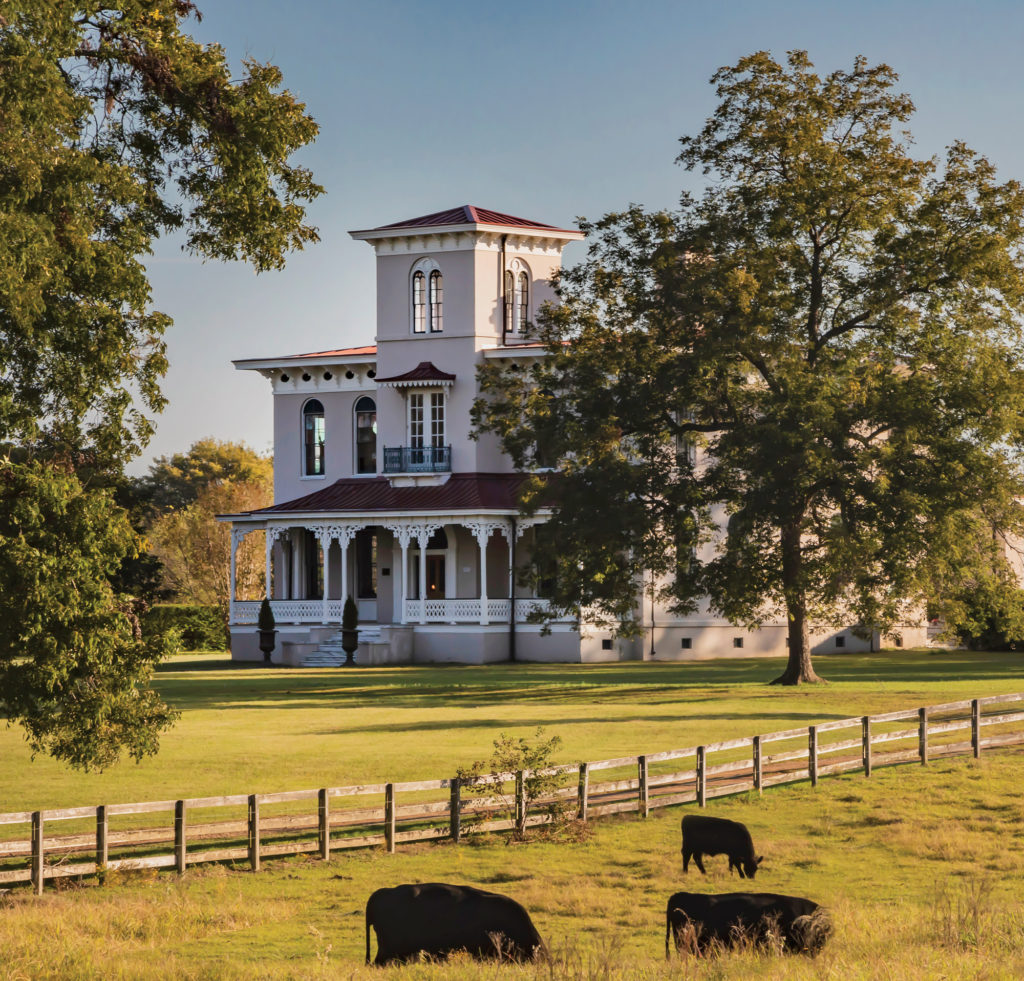 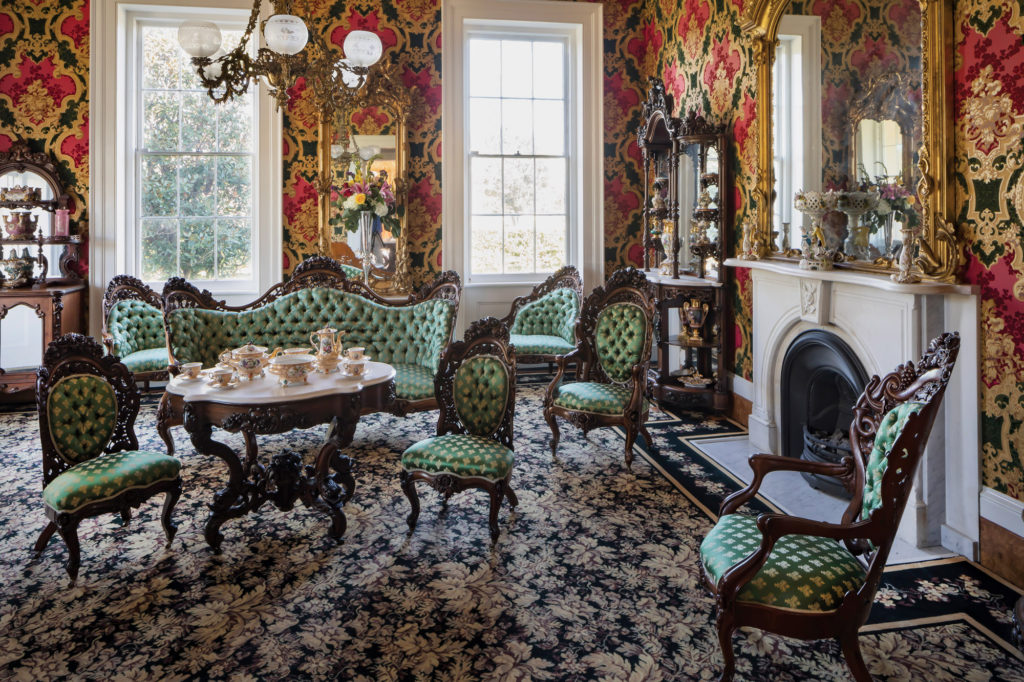 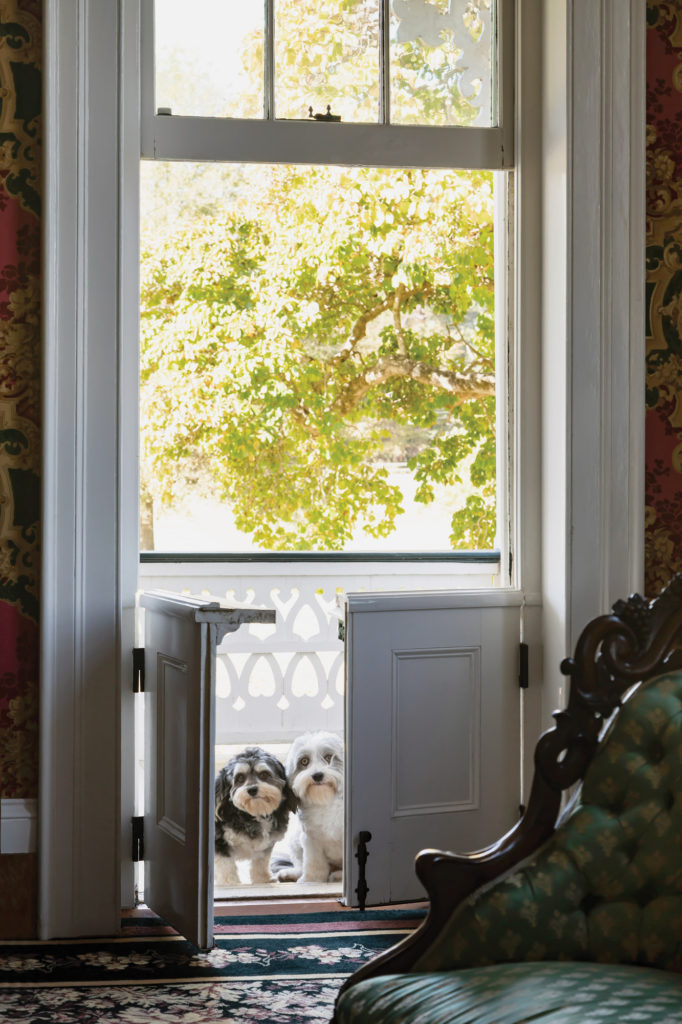 A small remnant of flocked, red-and-green wallpaper was found above the door frame in the Ladies’ Parlor, but there wasn’t a full repeat to guide reproduction. Chris Ohrstrom of Adelphi Paper Hangings did have a full repeat of a similar, flocked, mid-19th-century pattern made by Delicourt in France. Chris referred Gene to Cole & Son in England, who were able to laser-cut the printing blocks, then hand-print and flock the paper—a process that took over a year, with multiple strike-offs, to complete. Furnished with a Belter parlor set and a rosewood baby-grand piano, the room is once again an elegant retreat for entertainments and tea.

Across the hall, the Gentlemen’s Parlor was redecorated as an ode to the New York furniture-makers Herter Brothers. Handsome Renaissance Revival pieces include a pair of inlaid cabinets and a marble-topped center table adorned with brass masks and hand-painted porcelain rondels featuring putti (Renaissance cherubs). The walls were papered with Scalamandre’s ‘Kelton House’, a stylized floral paper originally found in that historic 1852 Italianate (currently a house museum) in Columbus, Ohio.

The master bedroom was papered with Zuber’s grisaille pattern ‘Paysage Italien’. Master paperhangers John Nalewaja and Jim Francis of Scenic Wallpaper actually made a small mockup of the room with folding walls, to work out placement of wallpaper scenes and panels in the room.

The kitchen at the back of the house has been updated, though the original brick ovens were conserved for display. Mauny’s ‘Faience’, a hand-printed, 19th-century tile-pattern wallpaper, is appropriate for the period.

The magnificent entry hall were drawing rooms for ladies and gentlemen. Now furnished with a Belter parlor set and a rosewood baby-grand piano, the Ladies’ Parlor is an elegant retreat for entertainments and tea. Across the hall, the men’s parlor was redecorated as an ode to the Herter Brothers, New York furniture makers.

By the time major restoration projects were done, Gene and Leigh had decided to bring the interiors back to their original, mid-19th-century grandeur. They engaged the architectural conservator George Fore, who developed a several-hundred-page historic-finishes analysis of Rosedale.

Gene Imes also engaged Candace Volz, an architectural restoration specialist based in Austin, Texas, to assist with the choices of wallpapers, floorcloths, and carpeting. Gene had been fortunate enough to discover—and purchase—one of the country’s largest collections of Belter furniture, along with Old Paris porcelain and Rococo and Renaissance Revival lighting, from a collector who’d decided to sell it all. Volz developed period-appropriate floor and wall treatments for each room to complement the furniture. Decorating began in the 55-foot-long entry hall, where an absence of carpet tacks indicated that a canvas floorcloth had been used. The staircase did have tack holes, indicating it had been carpeted. The new runner is ‘Rose Medallion’, reproduced from a mid-19th-century English design.