This house fulfilled twin longings for Paula and Harvey Bennett: to live in a Colonial-era house, and to breathe fresh, clean air. Back in 2003, the couple had met with a business associate in Damariscotta, Maine. For twenty years they’d been living in the mid-Atlantic region. But “when we got to Maine, we took a deep breath, looked at each other, and pledged to move here one day,” says Paula.

It was only a year later when they moved to the Pine Tree State, where a bracing breeze refreshed their lungs and a 18th-century house stole their hearts. Paula and Harvey live in environmental and historical mindfulness in this two-and-a-half-storey, center-chimney Georgian. With telescoping ells, the house is a textbook example of New England’s attached farmhouses. Rebuilt ca. 1797 to replicate a 1742 house largely destroyed by fire, the house continues to reveal its history.

“We met in college in the Sixties,” Harvey says, “and soon found we love the same things. One of our first trips together was to Colonial Williamsburg.” “We love 18th-century architecture and design,” his wife chimes in. “The scale, lightness, sense of grace—we can’t get enough!” So when they saw Maine’s great stock of 18th- and early 19th-century houses during that first visit, they began a search.

“We found this house online. After we came up to look at it, we dutifully looked at ten more before returning to the house we had fallen in love with before we ever stepped inside,” Harvey laughs. Paula adds that the house was comfortable from the day they moved in. “Houses do have vibrations,” she says.

Via an ongoing archaeological dig, the couple has deepened their knowledge of late 18th-century southern Maine history while learning about the early years of this house. The General Ichabod Goodwin House remained in the same prominent local family’s hands for generations, serving as a tavern for much of the late 18th century. Elements of the earlier Georgian-period house were likely reused in the 1797 structure, including the west-facing front door surround.

“That was a mystery solved,” Harvey says. “We had always thought the styling of the front door was much earlier than 1797.”

For three decades, Harvey has used firewood for heating and, sometimes, for cooking. In a house with sections built between 1742 and 1990, the owners simultaneously restrict and customize power sources for energy conservation—and with respect for the historic interior. They’ve found furnishings at local antiques shows and shops, but also have purchased suitable reproductions online. “The tricky part is getting the scale right,” Paula

A surviving house built at the crossroads of an early New England settlement is bound to deliver all sorts of historic fragments. All the more at this place, whose 18th-century builders were political, economic, and military leaders. An archaeological dig at the front corner of the General Ichabod Goodwin House was sponsored by the local historical association, and led by Dr. Neill De Paoli.

It has delivered a treasure trove of historic information. Although 1795 had long been the accepted date for this house, new evidence indicates that it was built in 1742, that there was a fire in 1794, and that the house was rebuilt by 1797. Evidence also suggests that the early keeping room, the northwest parlor, and the chambers above are much older than the rest of the house.

Artifacts suggest that the house served as an early tavern and those dating from ca. 1650–1730 confirm what architectural historians have guessed: that there was a building here even before 1742. Shards of German and English stoneware jugs, tankards, glass wine bottles, English clay smoking pipes, English delftware and Portuguese or Spanish majolica plates and bowls, as well as lead and glass quarrels from casement windows have been found.

“We sleep in the 18th century,” is how Paula explains their use of the house. Electronics, modern lighting, and the TV occupy the 1990 family room.“ Reflected in the size of furniture, and the patterns of damask, the proportions of the 18th century were more refined than they are today. Not that we’re purists,” she hastens to add. “My goal is to evoke the 18th century, not to reproduce it.”

Luddites, they are not. In their big, comfortable “1990 room,” they watch television, read by good light, and use electronic devices. But when they are in the 18th-century part of their house, they don’t use electricity. 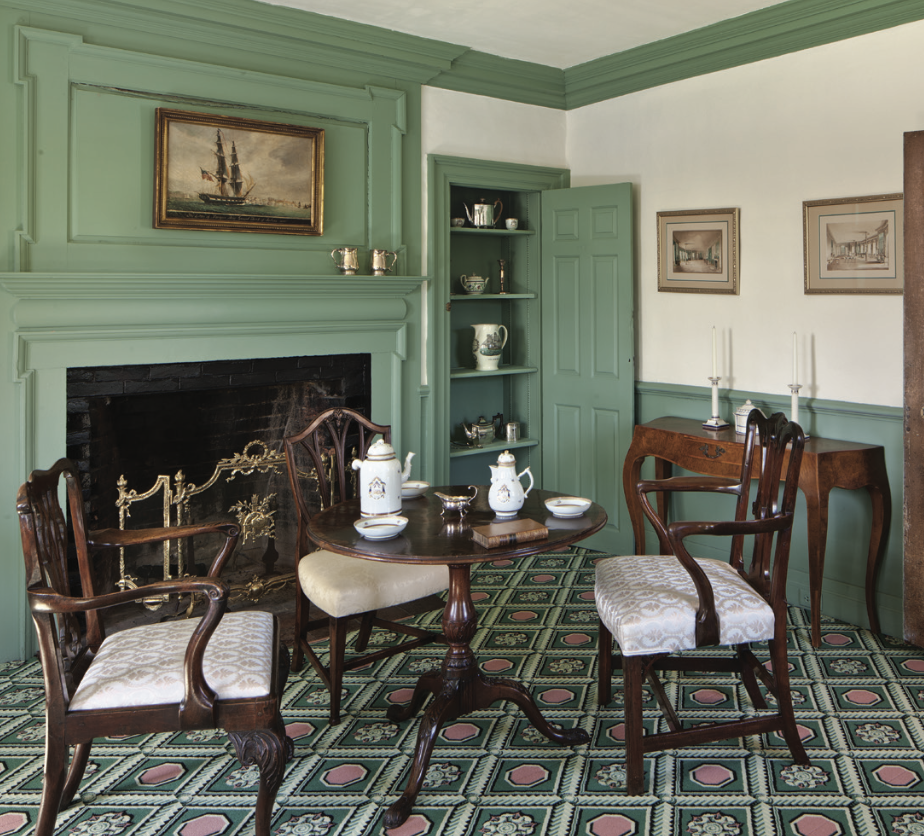 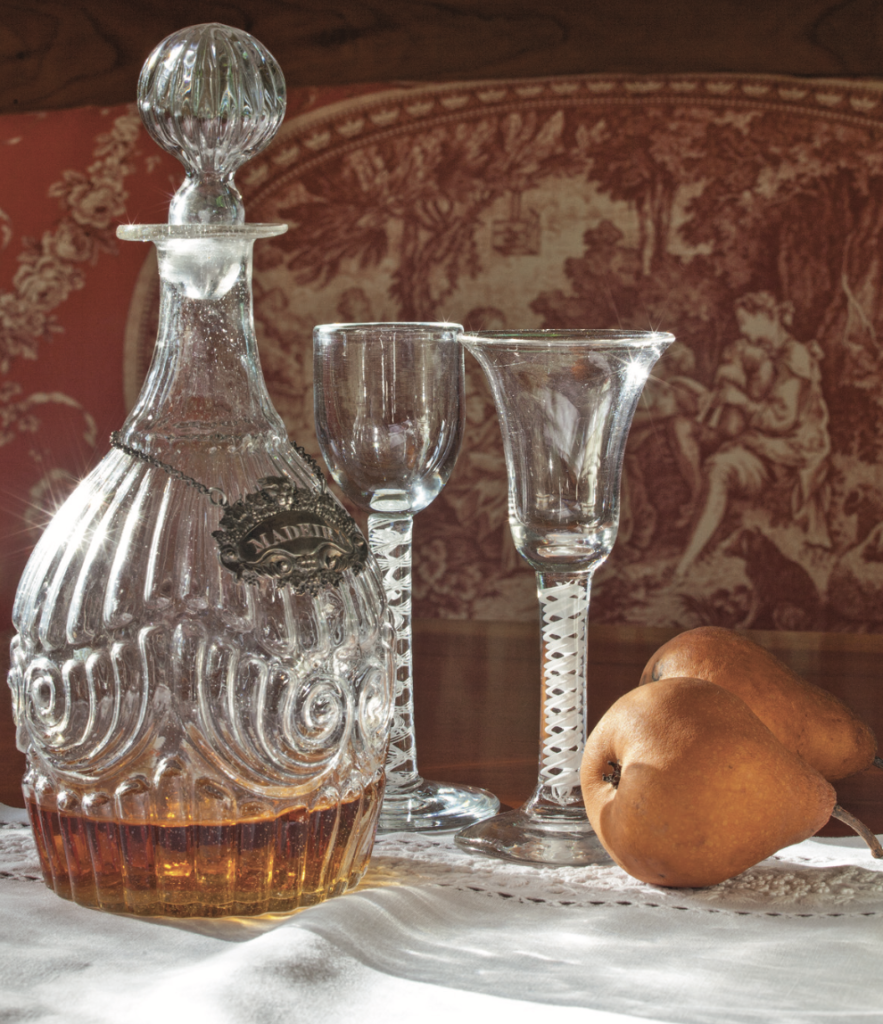 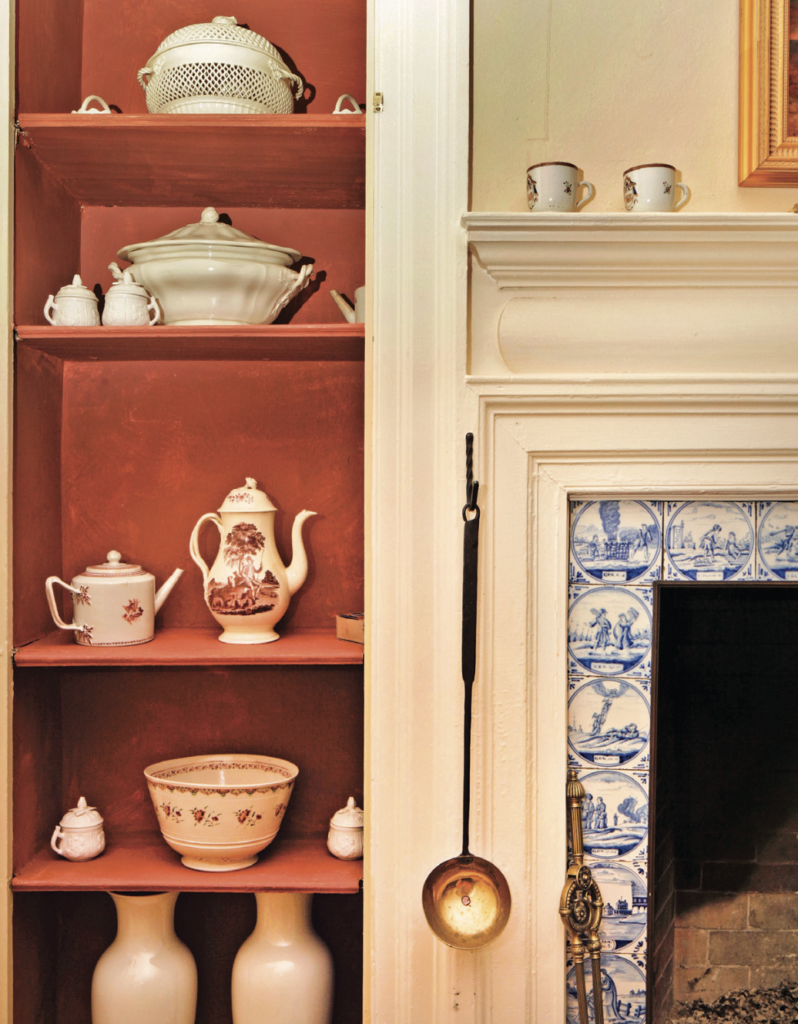 “We sleep in the 18th century,” is how Paula puts it. “We eat by candlelight in the dining room.” Power is available, she explains, but they don’t feel the need to use it. “Candlelight looks and feels right, and everyone looks so beautiful.”

The house is preserved more than it is restored. Fortunately, it retains its original nine-over-six windows, painted wide-plank pine floors, early Georgian mouldings, and an eight-foot-wide hearth perfect for spit-roasting. But these owners kept the evidence of many generations of occupants. From the early 18th- century sensibility of the massive keeping-room replace all the way to the gracefully integrated kitchen . . . from the antique front hall with its early 20th-century wallpaper to the vaulted 1990 family-room addition, this house comfortably accommodates the new alongside a deep history.