At the end of a white-gravel drive that’s watched over by towering specimen palm trees, there appears, as if by magic, a white stucco residence with a wood-shingled roof. In the English Colonial style, the house is calm and collected, relaxing into the lush landscape and subject to the gentle ocean breezes of Jupiter Island, Florida, which whisper across its façade. Just beyond are views of the wildlife on the Intracoastal Waterway.

For the owners, a couple with homes in different geographical areas, it’s a special place. When they bought the three-acre property, they envisioned creating a shorts-and-sandals summer compound for family gatherings, where they could hang out by the pool, go boating, and fish from their dock. They wanted everything to be perfectly in sync with the natural surroundings, so, to get the feel for the land, they lived for a year in the nondescript house that was here.

Once they had sited all the best views and tracked and timed the trajectory of the breezes, they commissioned New York City’s Ferguson & Shamamian Architects to bring their vision of feel-at-home splendor to life. The firm designed a 10,000-square-foot, classic five-bay house with a two-story main block and two one-story wings.

“This is not a formal house,” says partner Oscar Shamamian, who along with principals Tom McManus and Stephen Chrisman took the lead on the project. “The main block looks symmetrical, but wings are more fluid. Everything gets more informal the farther you get from the center of the house.”

The residence, which is classically organized, features a transitional open floor plan and pared-down details. The first floor contains the dining and living rooms and a small library, and the second floor is devoted to the master suite. “The owners wanted their bedroom to be separate from the rest of the house and to enjoy the best views,” Tom McManus explains. “The solution was to dedicate the second floor entirely to the master suite. This isn’t a common plan, but in this case, it was a good idea.”

The owners also requested a lot of covered and uncovered outdoor spaces. “It’s a five-bay house, but on the top floor, we carved one out for a porch, so upstairs it’s a four-bay,” Shamamian says. “The covered porch wraps around the second floor, and this outdoor space gives 270-degree views, from the Intracoastal to the ocean.”

“In fact, the house feels as if it might have been the first house built on the island,” says lead architect Oscar Shamamian.

To determine the best second-story views, the Ferguson & Shamamian team went to great lengths and heights: Before construction started, they explored the vistas from the second floor by using cherry pickers, to make sure the scenes from the house were optimal.

One wing contains two guest rooms; the other has a kitchen and butler’s pantry, a breakfast room, a family room, and, at the end, a small office. “By making the wings only one story, it helped to break down the massing of the house and made it appear as a collection of smaller buildings—an idea the owners liked,” Shamamian says. “This also allowed for high ceilings with different wood detailing in the wings.” 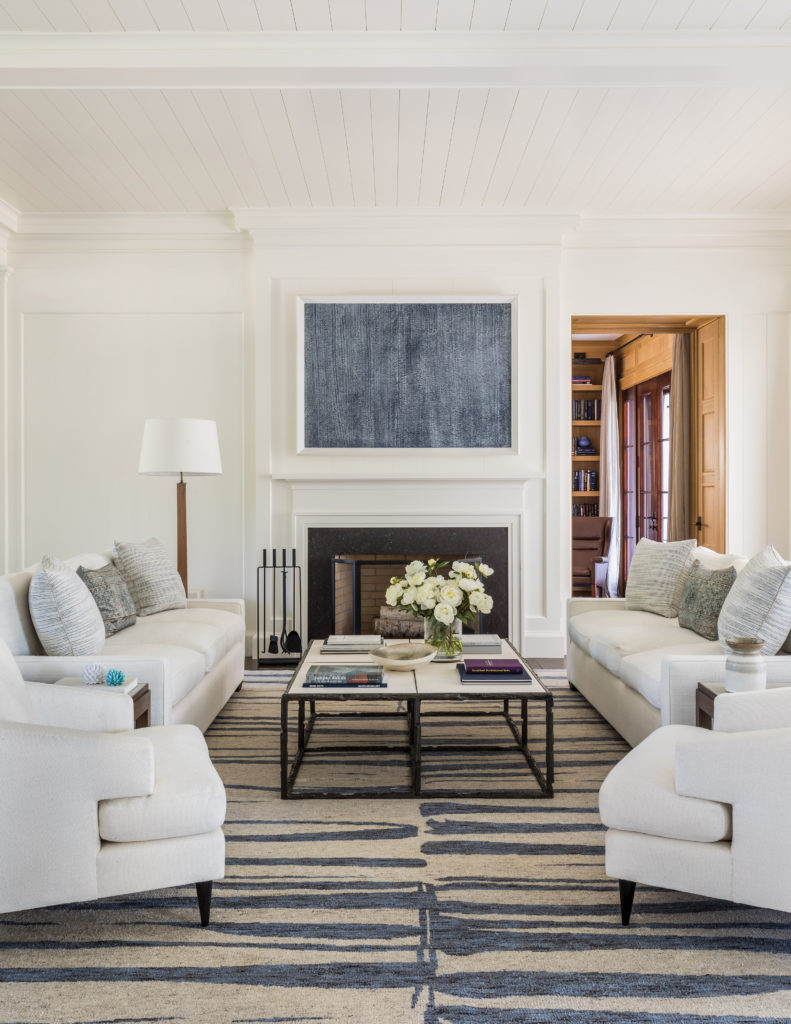 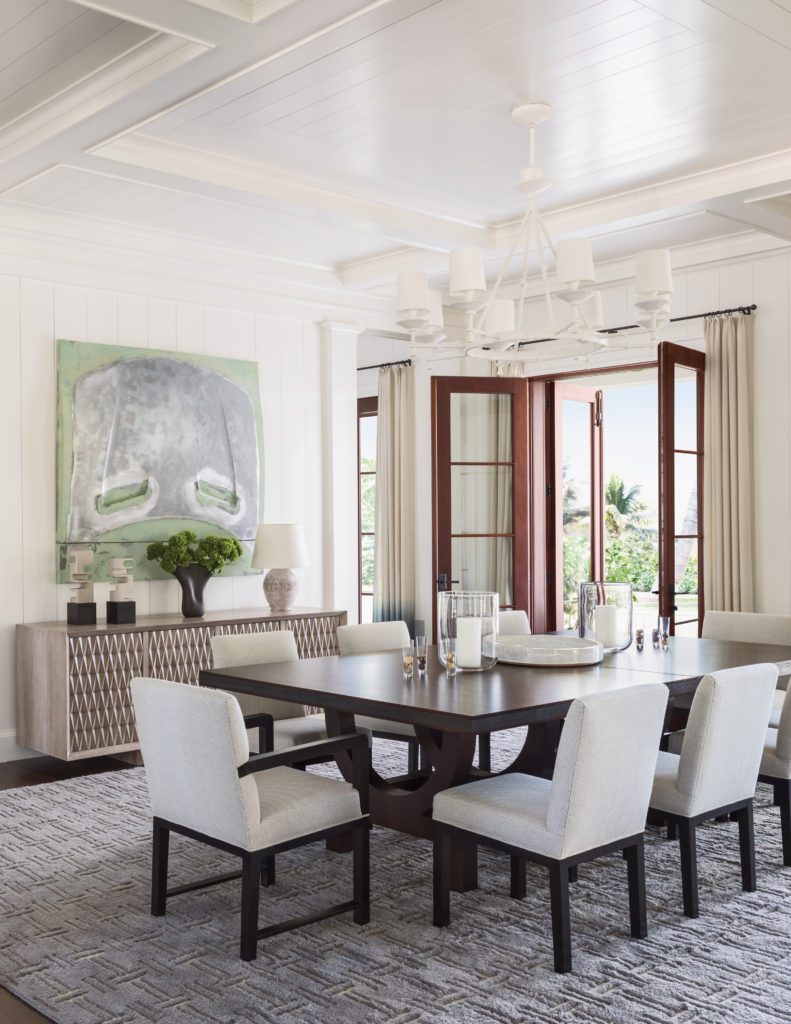 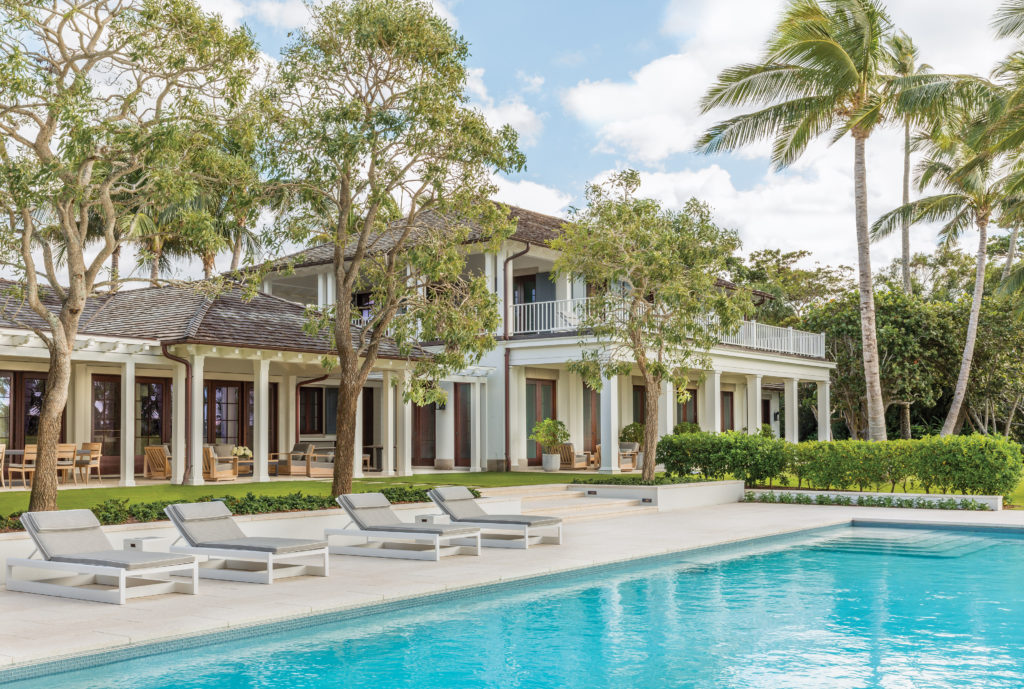 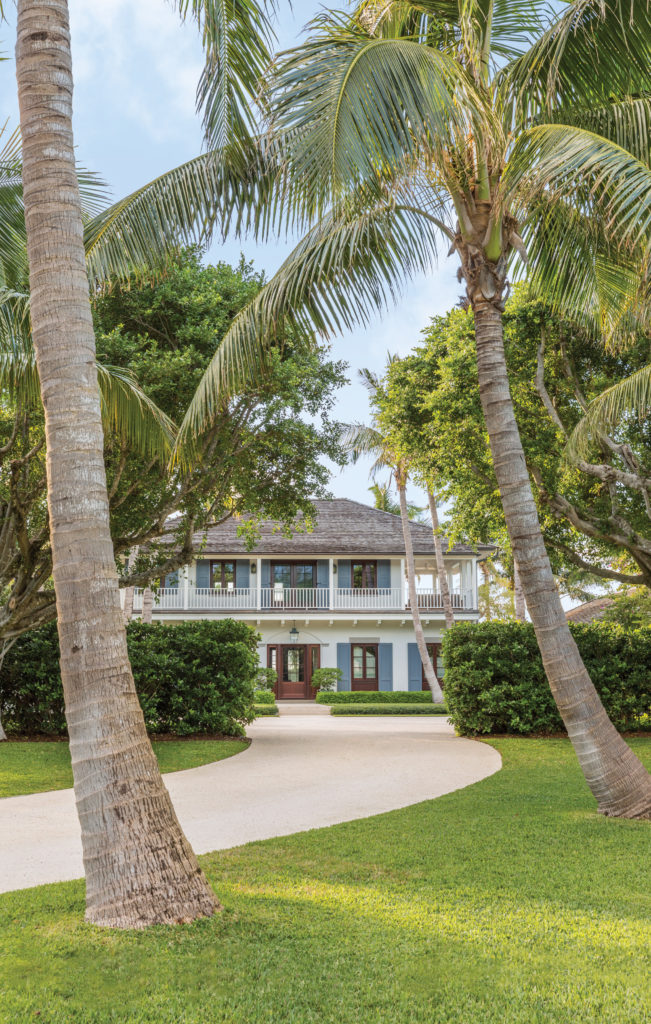 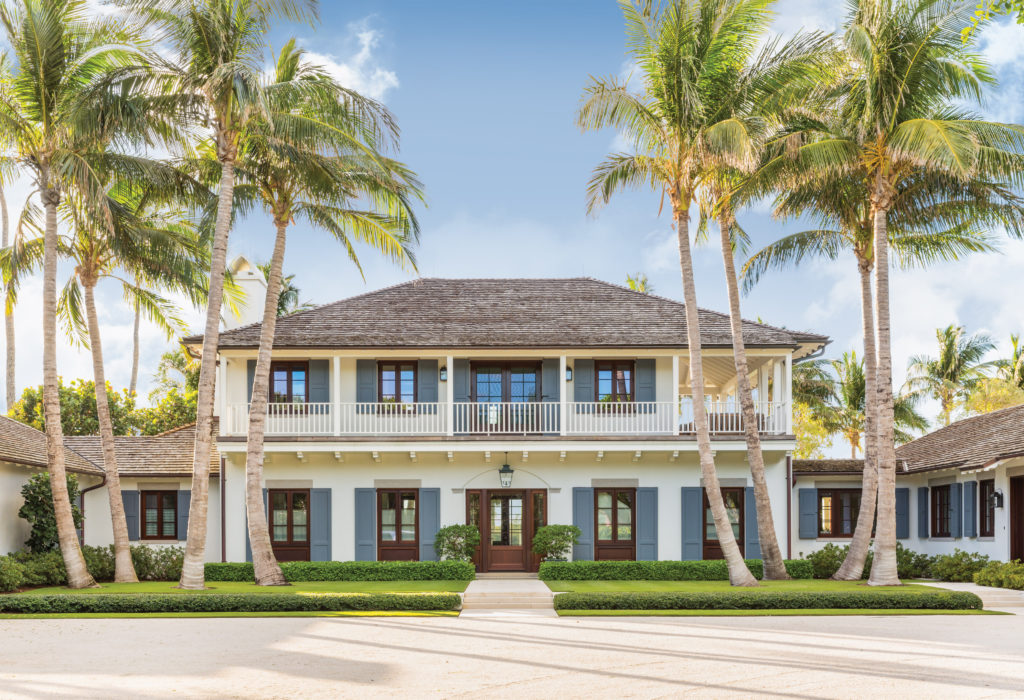 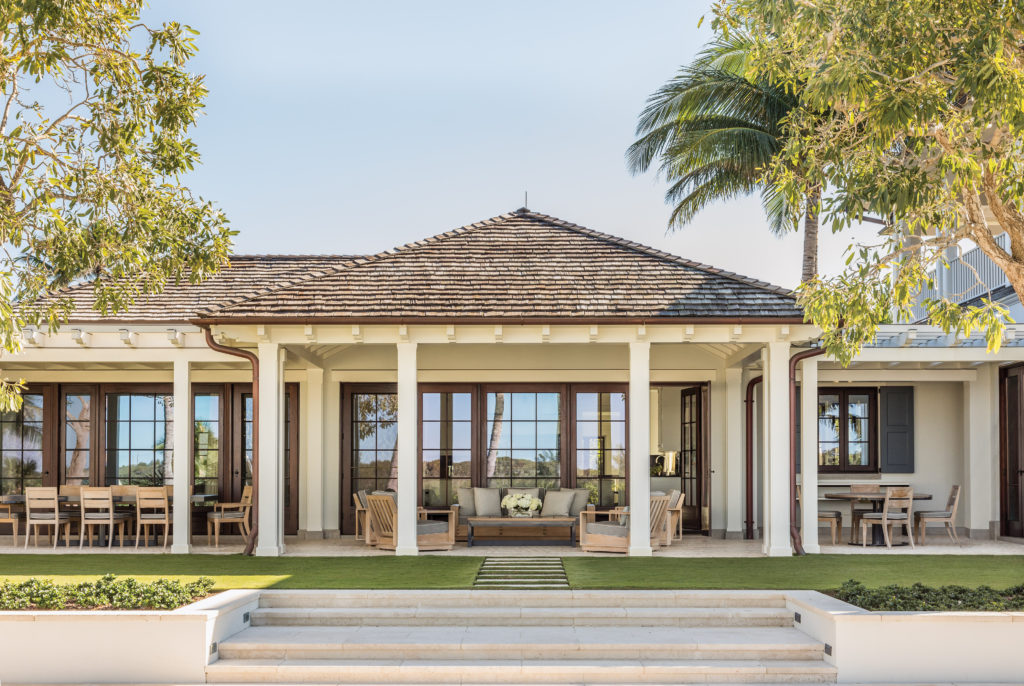 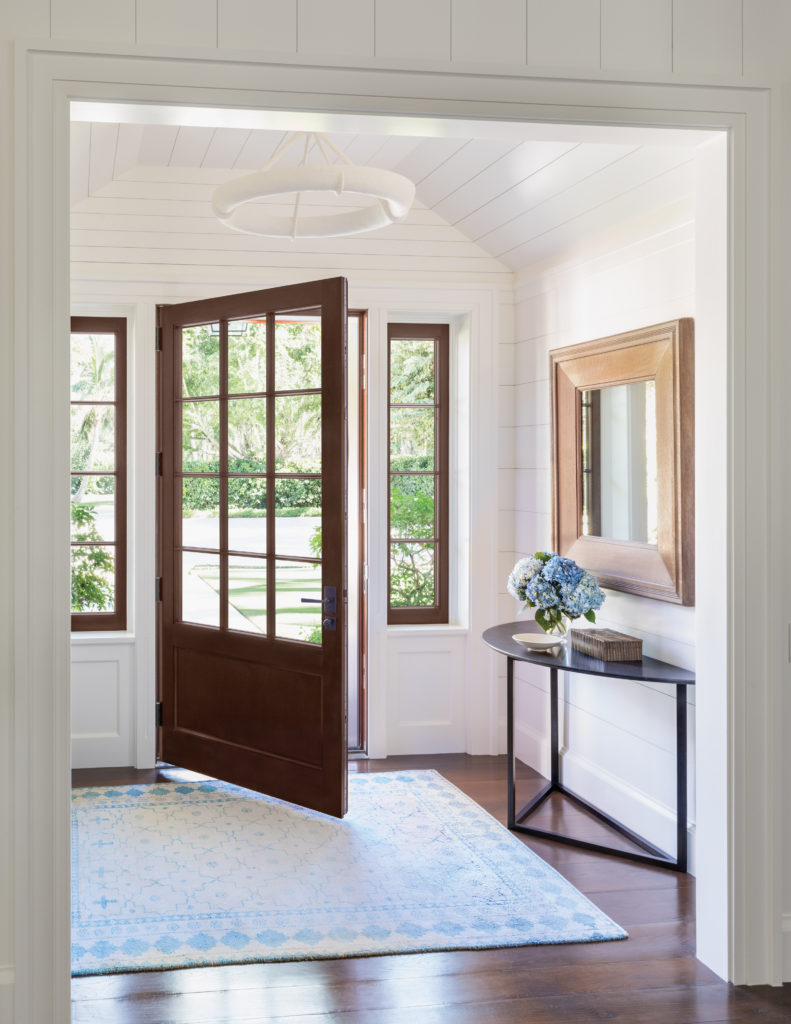 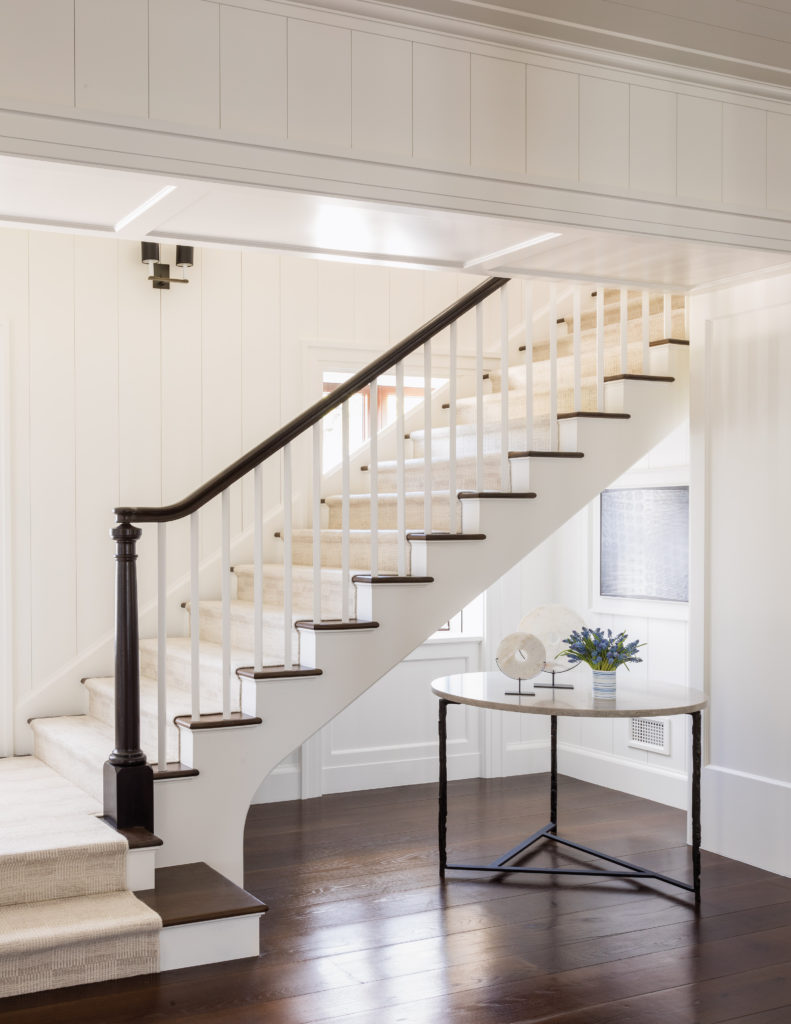 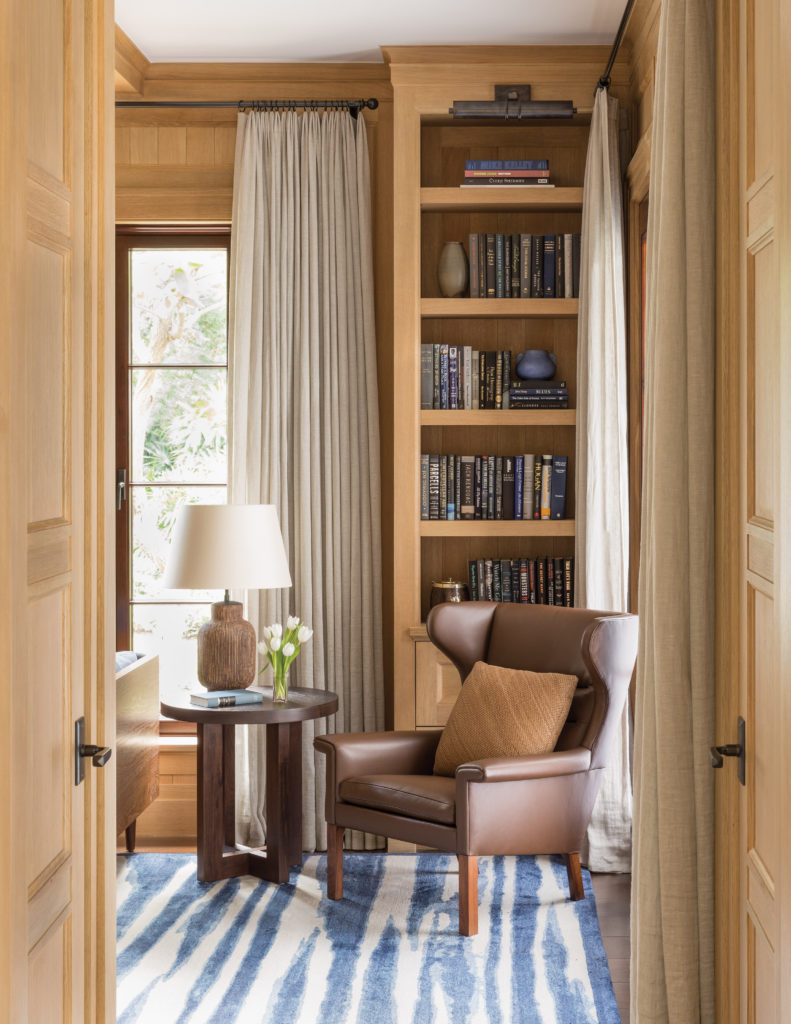 The kitchen ceiling, for instance, features an exposed framework. “It almost looks like a builder’s loft with trusses,” McManus says, adding that the family room has a painted tray ceiling, and the guest room has an oak tray ceiling.

Shamamian says that “it took time, skills and energy—and some 20 design proposals—to keep the house low-slung and appearing natural.”

He mentions the large outriggers on the exterior rafters, traditional Floridian accoutrements that also reference classical Spanish architecture; the gently arched cap of the snow-white chimney; the projecting porch; and the straight pickets of the second-floor balcony balustrade that are turned 45 degrees to create artistic shadows.

Inside, Shamamian references the slotted-wood boards with horizontal and vertical joints that define some walls, and the French doors in the dining room, which are 8 feet 3 inches high instead of the standard 7 feet to give unobstructed views of the water and sky.

The transition to informality proceeds in a hierarchical progression, with spaces farthest from the main block kicking back. The casualness lies in the details, such as the wood flooring, whose planks get wider in rooms like the kitchen, where they convey a rustic look.

The library, just off the living room, wears its casual elegance with panache. “With all the other rooms being white, the owner wanted to distinguish this one, so it was paneled in American white oak,” McManus says. Interiors designed by Victoria Hagan feature large gallery-like wall spaces for the owners’ collection of artwork.

The property also has a garage, a swimming pool, a fishing/tackle room, a caretaker’s house, and a guest house. Landscaping by Jorge Sanchez makes the house look as though it has been presiding over the property for generations. “Huge specimen trees help ground the house,” Shamamian says. “And in the back, steps that lead to the water were carved from a natural coquina shelf, leaving behind an outcropping of the sea-formed coral as a retaining wall.”

Shamamian says that the owners, who were hands-on collaborators in the project, were integral to the design process, which typically makes for the best results. “They pushed to make this house unique and personal,” he says. “I’m not aware of anything else like it on the island. It feels like it belongs here. In fact, it feels as if it might have been the first house built on the island.”