Italianate styles reigned for half a century, during which Rococo, Renaissance Revival, and cottage furniture made their appearance. Creative ostentation, a joyous use of polychromy, and sinuous curves are always in order.

The Italian styles are, despite the name, an American classic—the most popular building style for over a generation, throughout the country. Deep eaves and heavy brackets, hooded windows and round arches were rendered on houses simple or grand, built of wood or brick or brownstone. Houses fall into three basic categories: the Villas, Renaissance Revival, and Italianate. Villas were meant to evoke the farmhouses and manors of the Italian countryside. Most often used for public buildings and in urban settings, the more formal Renaissance Revival style is restrained and symmetrical. Italianate encompasses everything else.

The Italian forms and the Gothic Revival arrived at about the same time, two picturesque styles that ended Greek Revival’s long reign. In England, Gothic would become the predominant style of the Romantic or early Victorian period. In America, however, the Italianate had become far and away the most fashionable architectural style by the 1860s. Builders nationwide would use its vocabulary almost until the end of the century.

Easily recognized by its details, the freewheeling Italianate style (1850–1900) is the most interpretive of the Italian styles that swept the country starting around 1840. Italianate encompasses everything from the ambitiously eccentric to the simplest rural vernacular. Many 19th-century farmhouses, in fact, are Italianate: basically, a rectangular I house with a porch and some brackets in the cornice.

Italianate houses, of course, were meant to evoke the stone construction of Italy; thus buff and straw stone colors are a good choice for exterior color. Bisque-color limestone, grey-green, and stoney grey to blue colors are appropriate. If the body color is light, do the trim darker: olive, drab, mahogany red-brown. If the body is dark, trim may be done in limestone-yellow or limestone-grey. Sash should be painted in a dark color. The front door was often varnished, not painted. Accent colors or a reversal of body and trim are popular on projecting bays.

Italianate style waned during the postwar economic troubles of the 1870s. By the time things picked up, such Late Victorian favorites as the Queen Anne and Stick styles and the early Colonial Revival were in vogue. 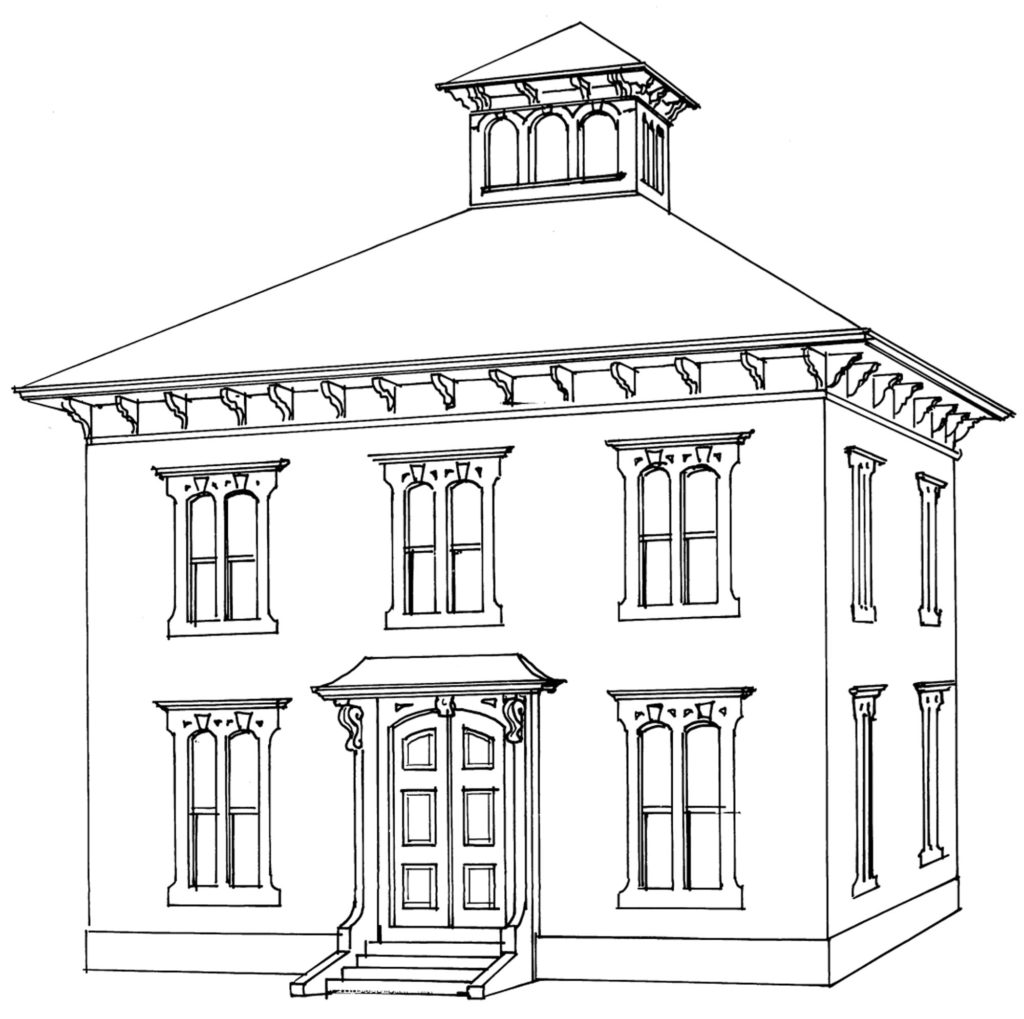 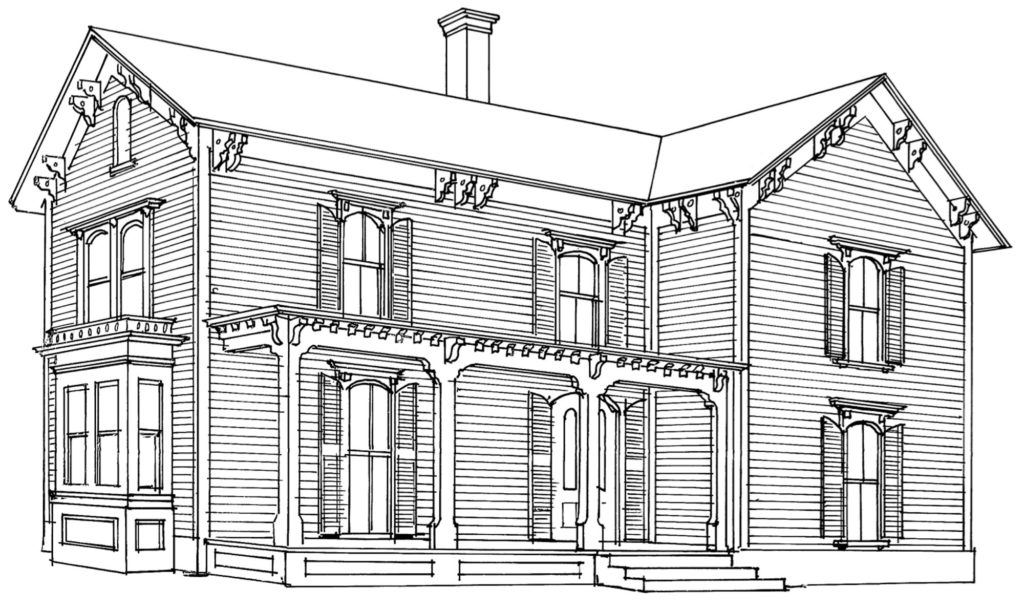 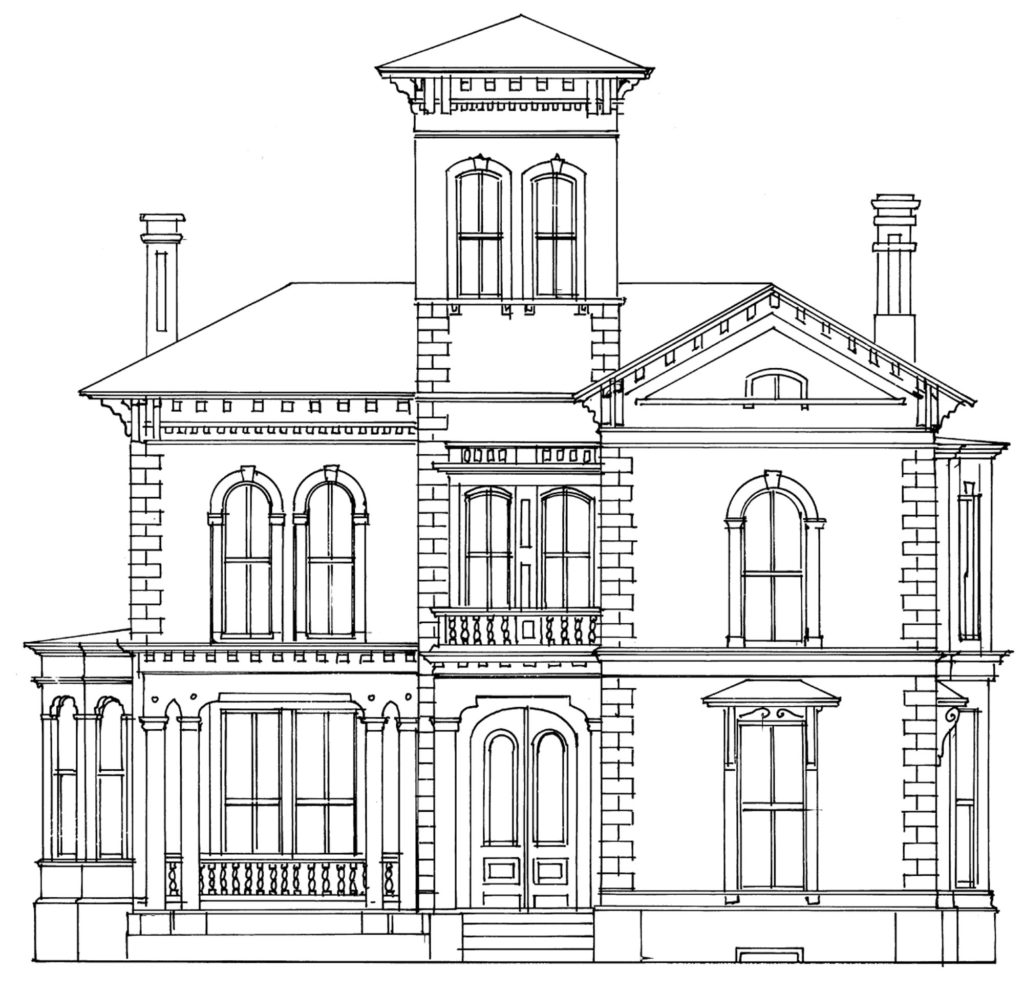 • arcade A series of arches with their supporting columns.
• ashlar Smooth-faced, dressed masonry with square edges.
• bay A three-sided projection with windows, which goes to the foundation.
• belvedere Translated roughly as “beautiful vista,” it’s a lookout with windows, usually square, on a roof.
• bracketed style Alternative name associated with architect A.J. Davis, for the romantic
Italianate style along the Hudson River, named for the large decorative brackets under the roof cornice.
• campanile From campana (bell), it’s the square tower projecting from a villa in Italian architecture.
• loggia The arcaded or colonnaded porch on an Italian building.
• modillions Repeating blocks or console brackets running along the entablature and below the cornice.
• oculus A round (eye-shaped) or oval window; window in a dome.
• oriel A window structure that projects from the wall surface, but does not extend to the ground.
• pediment A triangle-shaped crown, as in a gable or over an opening.
• piano nobile The main floor in Italian architecture, usually reached by a staircase and having the highest ceilings.
• pilaster A rectangular pier treated as a column and engaged partly “in” the wall or trim.
• round-top window Half-circle (rather than segmental) arched sash, often seen in paired entry doors on Italianate houses.

Italianate houses are relatively easy to identify, but there is no particular “Italianate style” for interiors, because the style spanned half a century. The (French) Rococo was in vogue in the 1850s and 1860s for houses in the Italian style, and Renaissance Revival interiors held sway after 1870. The typical Italianate house had a Gothic Revival piece or two. These Romantic-era styles both were advocated in Downing’s influential pattern books of the 1840s. While the Gothic edged out the Italian in England, the opposite was true here.

One approach to decorating will apply to a mansion, where money and skilled labor were available and the architect may have chosen Rococo Revival pieces from established cabinetmakers. Another approach makes sense for a Midwestern builder’s house of the 1880s, most likely furnished with production Renaissance Revival and cottage furniture. Instead of the mansion’s florid cast-plaster brackets and cartouches, the more vernacular house had just ceiling medallions; the rich man’s trompe l’oeil frescoes were recast, in the vernacular example, as papered or painted panels on plaster walls.

As with exterior color, neutral stone hues were suggested for inside: greys, pinks, pale blues and greens. (After 1860, stronger colors were advised.) Halls were to be cool and neutral, often papered or painted in imitation of ashlar, or smooth stone blocks. Graining was common, marbleizing more so—used on baseboards, columns, in niches, and even on entire walls. From 1830 until 1850, narrow paper borders were common, decorated with florals, trailing vines, or architectural details.

Floors of narrow softwood boards were meant to be carpeted wall to wall. Later in this period, hardwood floors were laid in patterns including alternating stripes of dark and light. Stone or marble squares, real or painted, were preferred for halls, as were encaustic tiles in terra cotta, buff, and black.
Flat-woven Venetian carpeting and ingrains—reversible carpets made up of narrow strips sewn together to span the room—were affordable. Luxury (pile) carpets included Axminster, Wilton, Brussels, and tapestry.

“Italianate” is the most freewheeling of a series of Renaissance-inspired styles ca. 1845 to 1900.

Bookshelf
• John Notman, Architect by Constance Greiff: Athenaeum 1979. Scholarly discussion of the work of the Philadelphia architect credited with bringing the Italianate styles to America.

• Farmhouse Revival by Susan Daley & Steve Gross: Abrams 2013. Although many of these houses are no longer on working farms, the choice of what to photograph is wonderfully un-retouched, and includes preserved interiors as well as those respectfully updated.