Surrounded by the Martin Wildlife Refuge and bordering the Runnins River, this house is in Seekonk, Massachusetts. Though it’s on a main road, the site is secluded and verdant, with a dreamy backdrop of river curving away into the distance. “I bought the property in 1998 because of the land, which measures just under an acre,” says Andrew Grossman. “It abuts a wildlife sanctuary and overlooks a river! The house itself was secondary.”

Since then, Grossman has created a whole series of display gardens that demonstrate his design principles. The landscape delivers changing, colorful views from every window.

“I’m a garden designer, so I bring clients here to see what’s possible and to help them with ideas,” he says. (The garden has also been the subject of many blog posts, and even a cable TV show.) Grossman has planted a blue-and-white garden, a checkerboard garden, a pond garden, a side garden, a hot-colored garden (in the location of the former driveway), and additional gardens that focus on specific views or features.

When it came to renovating the ca. 1850s house, the gardens were integral to the plan: “The idea was that there should be a beautiful view from every window of the house, in all seasons,” Grossman says.

The house started as a 925-square-foot Cape that had originally faced the opposite way. Because a driveway leading to the front door was removed when Grossman bought the property, what was originally the back of the house became the front. This gave Grossman further impetus to reconfigure and redesign the interior, which had consisted of small rooms that did not logically connect to each other or function for his needs.

“The house was somewhat ‘updated’ in the 1950s,” Grossman says. “Until I began my renovations, I didn’t even know that I had wood floors because they all were covered with carpeting and linoleum.”

Grossman mostly gutted the house. He kept the living room intact, prompted by the desire to save original elements including the woodwork and the mantel. The fireplace was still there, but with a wood-burning stove venting through the flue.

Over the years, Andrew Grossman added a sunroom that also functions as the dining room, a new master bedroom on the first floor, and, on the second floor, another bedroom combined with a home office. Today the house measures 1800 square feet. Gravel paths that intersect around four enclosed rectangular garden beds lead to what’s now the front entry. The beds hold roses, perennials, flowering shrubs, and annuals in tones of pink, yellow, white, and blue. Fence posts and swagged ropes make up the enclosure; at the end of each gravel path, an arch bearing roses and clematis leads in and out of the garden.

The old front door leads into a kitchen that includes a sunny breakfast nook. Next is the living room with its 19th-century fireplace. With gleaming hardwood floors and a few pieces of seating furniture upholstered in pale neutrals, the room exudes calm. The living room leads in turn into the new sunroom, a vaulted space illuminated by skylights and windows on three sides. Grossman designed a window seat that was built in to stretch across one long wall under a bank of three windows. In the summer, screens cover every window, so the room is open to garden and breezes. In winter, it serves as a conservatory for tender plants that have to come inside when temperatures drop. Radiant heat under the flooring warms the space. 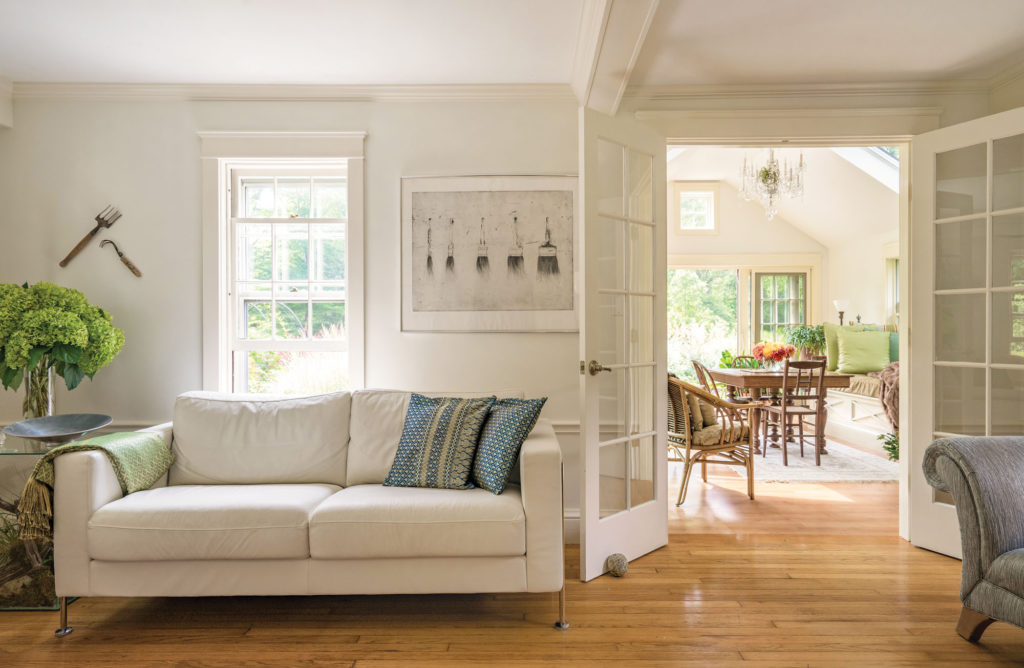 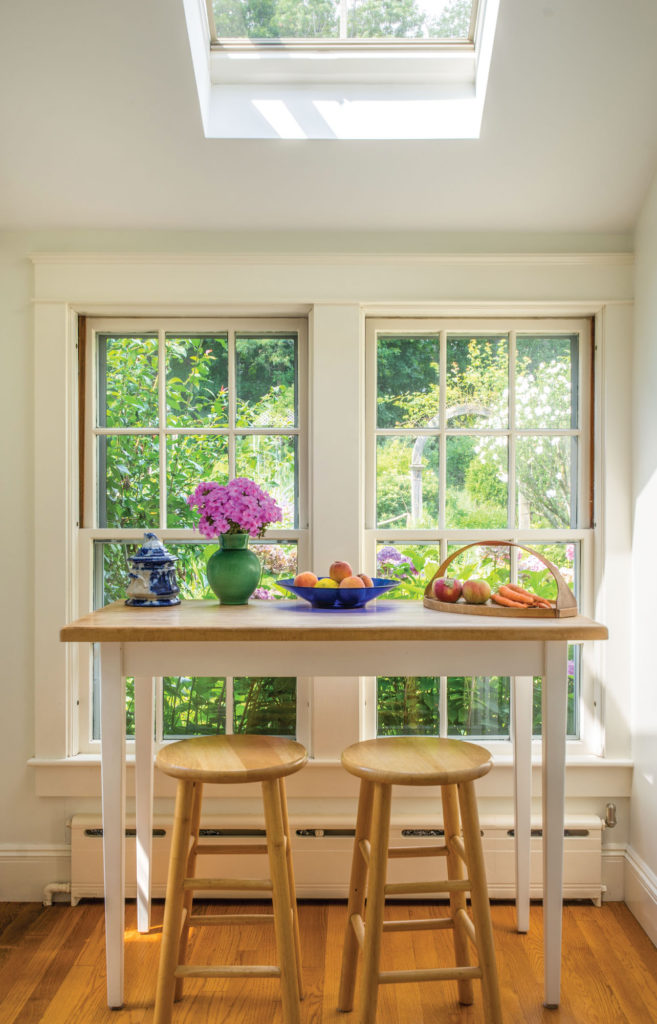 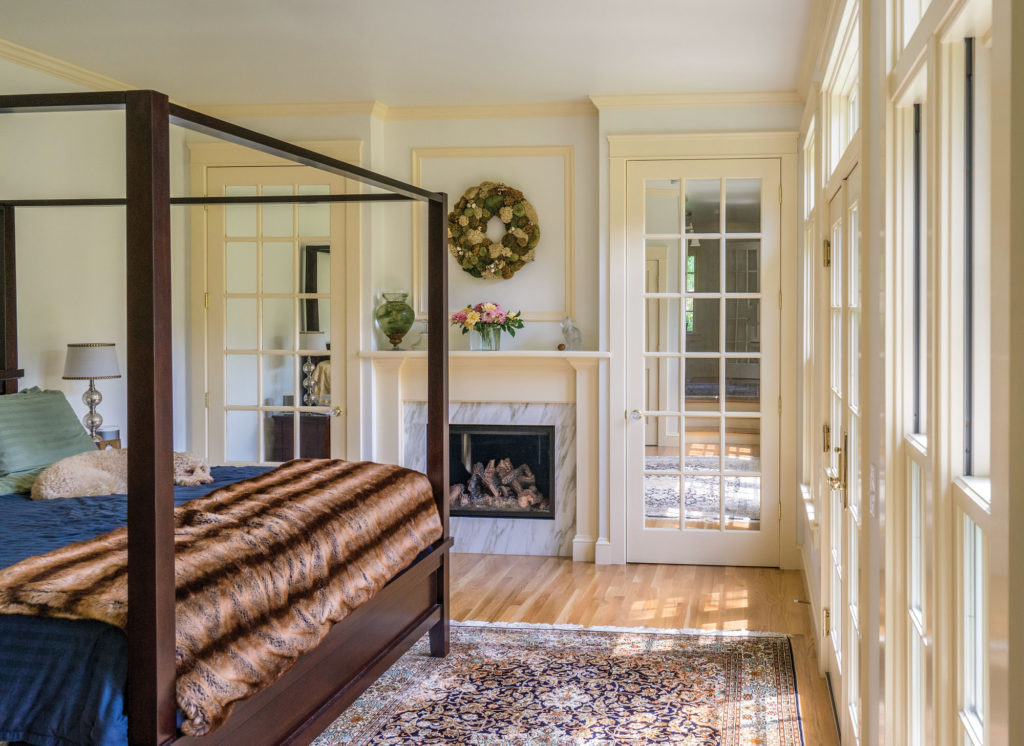 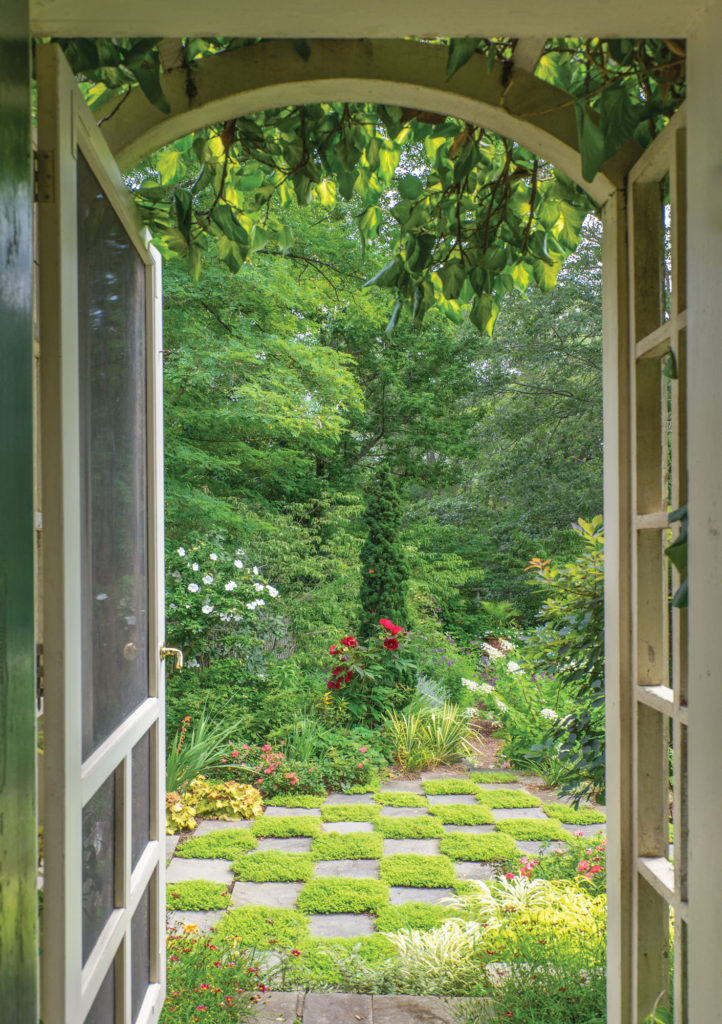 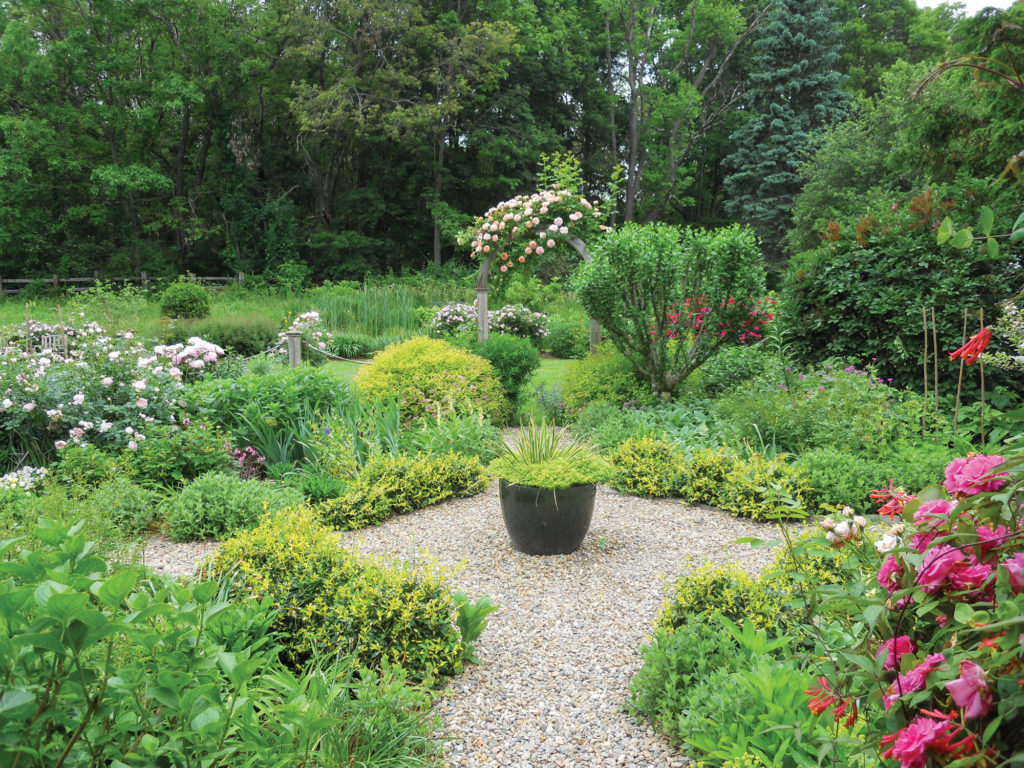 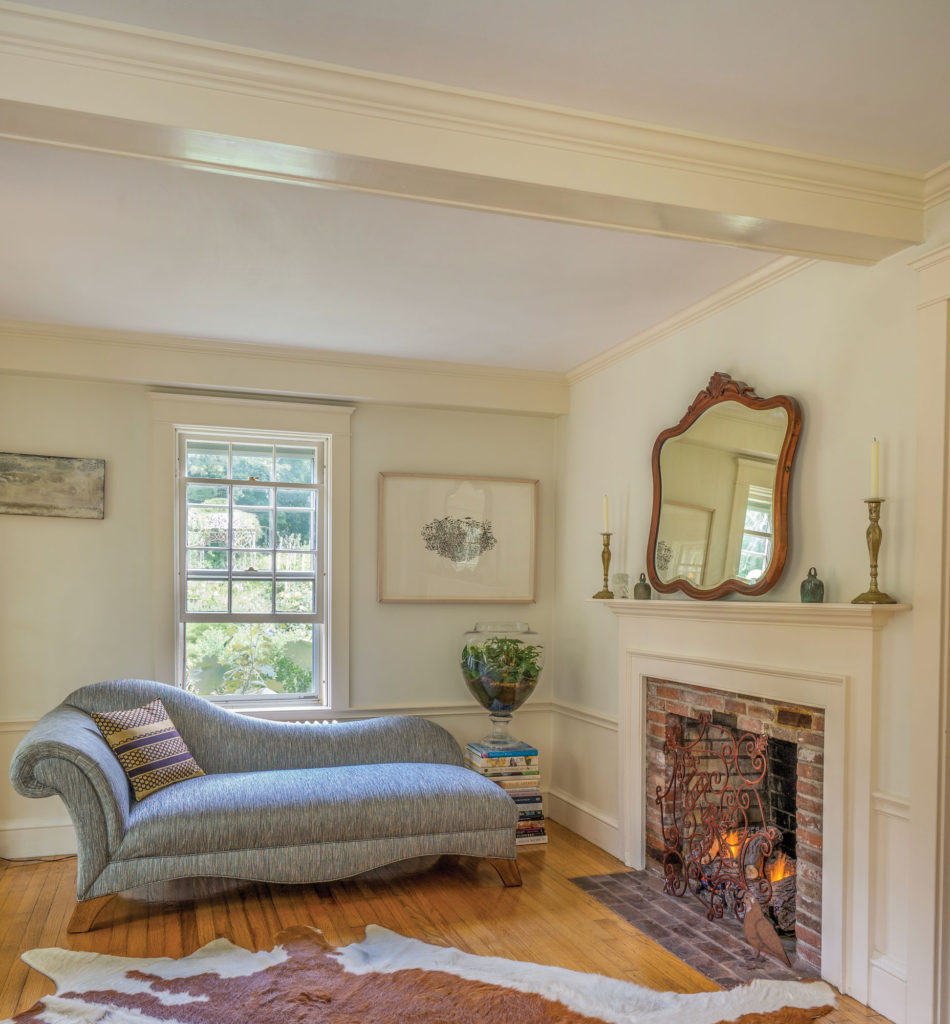 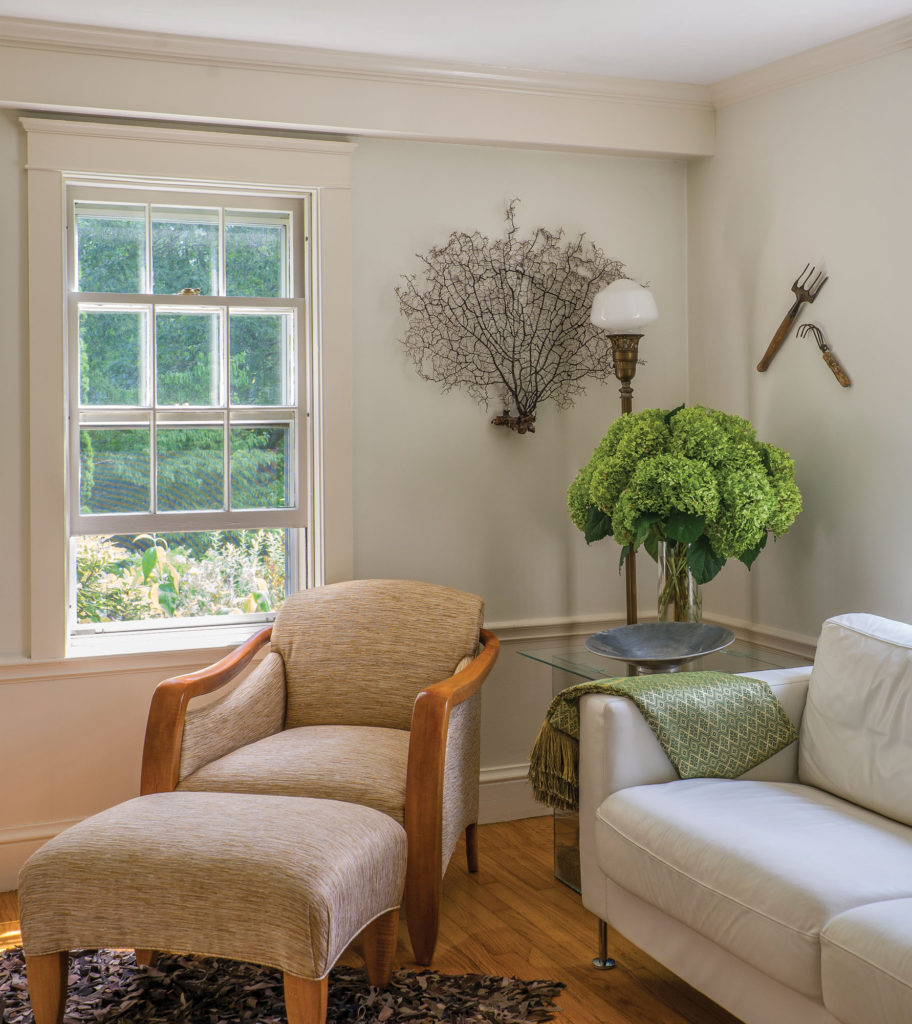 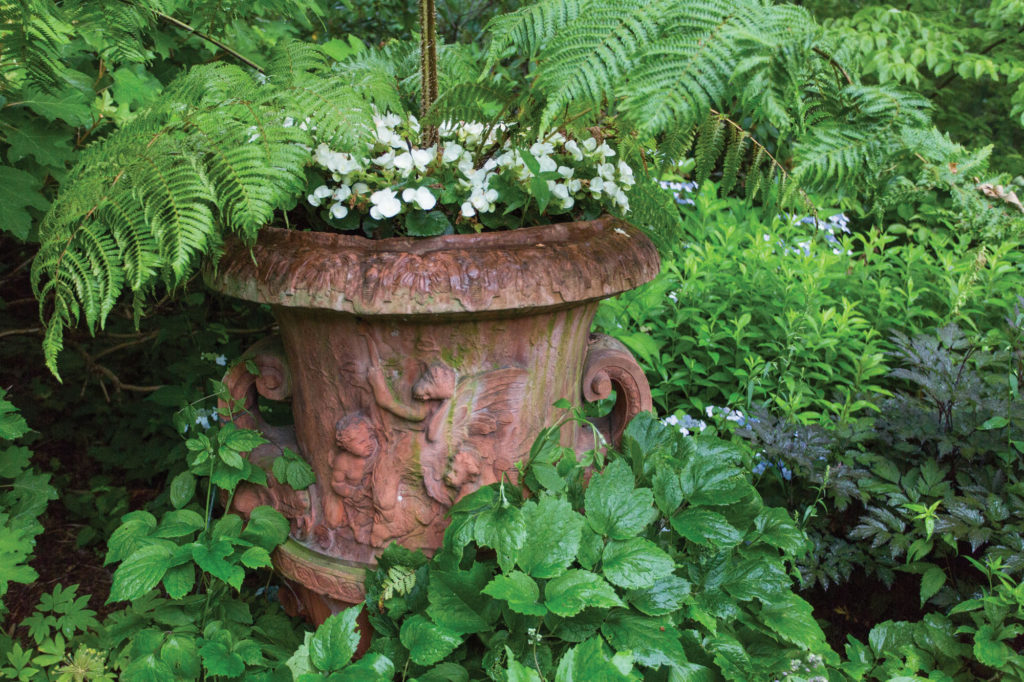 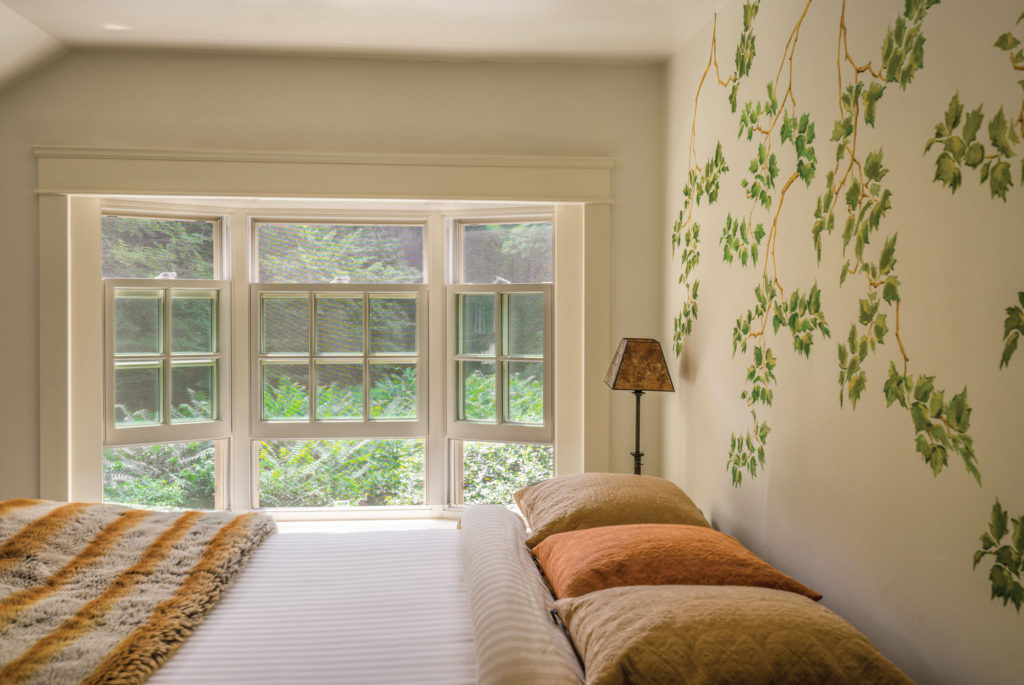 The new master bedroom is downstairs, at the opposite end of the house. Distinguished by a gas fireplace set into the wall with a white marble surround, the simple room focuses on the view. The bed is placed so that his garden is the first thing Andrew Grossman sees in the morning. In what was the original master bedroom upstairs, he’d earlier added a wall painting of maple-leaf branches. It remains in what’s now a guest room, slightly enlarged by a new window bay that brings the outside in.

One of the first spaces designed by Andrew Grossman for his property was the checkerboard garden. It directly abuts the house on what was originally the front façade, but is now the back.

“What used to be the front door now leads into the garden,” he explains. “The old garden stairs are not centered on the arbor and door. This checkerboard masks the lack of a centerline, and introduces a fanciful geometric element that has become one of the property’s most photographed spaces.

“Geometry feels right, up against a house,” Grossman says. “I’m not really a fan of garden beds that look like they fell out of the sky. Shapes should not be arbitrary; there should be a reason for the shape or the lines to be there.”