“My childhood memories are of my parents working on this house,” says Joyce Block. “It was their never-ending project: wallpapering, uncovering the wood floors, refinishing woodwork . . . they were hard-working and meticulous, and so proud of their home.”

The brick Tudor in Minnetonka, Minnesota, was designed by an architect for a doctor; it had seen almost no renovation. When Joyce’s parents bought it in 1965, her father—also an architect—designed a large, gabled dormer to be built at the rear. That added space to the upstairs bedroom shared by five girls: “My dad had four kids and my mom had four kids,” Joyce explains. “We were the original Brady Bunch, and a couple of years later we welcomed a new sibling. Nine kids, and mom and dad, in a three-bedroom house!”

In the 1980s, her father reworked the kitchen—a room that was dated by 1998, when Joyce bought the house at her parents’ retirement. Happily, the old, original kitchen with its mid-century flourishes had been installed in the basement, becoming one cue in the design of a period-appropriate kitchen, by David Heide Design Studio.

“We really didn’t do anything except the kitchen,” Heide claims—but he’s being modest, according to Joyce.

True, the renovation included no structural changes, no addition—but even the exterior benefited from finesse. “I’d had a two-tone paint job on the trim,” Joyce says. “The monochromatic scheme lets the colored brick star.” Cutout shutters are the finishing touch—and in fact, the house once had had shutters, but they’d gone missing. Designer Michael Crull also replaced light fixtures with period-compatible reproductions.

Tudor Down the Block
Who wouldn’t fall in love with this
subtly colorful house that nestles into its
lot? The sunroom and tucked-in garage
are original, as is the clipped gable.
Cottage shutters replicate old ones.
“My parents called it our little
house of Chicago brick,” says
today’s owner.The house was sound, Heide remembers, but “it lacked joy.” A series of tweaks brought it back: removing a fireplace insert, refinishing wood floors, adding period wall tiles to complement the original flooring in a bathroom, specifiying paint colors and wallpapers. As important is what the designers chose to leave alone.

“The first thing I did,” Joyce Block reports, “was to get the house officially recognized as a Minnetonka Landmark.” But Joyce was raising four kids at the time, so it was years before she could see to restoration. “Finally, I looked around and saw that time had taken its toll. I was tired of the ’80s kitchen, tired of the particleboard floor in my bedroom [revealed when carpeting was pulled up], tired and frustrated from the task of trying to find a decorator or builder who could help me. 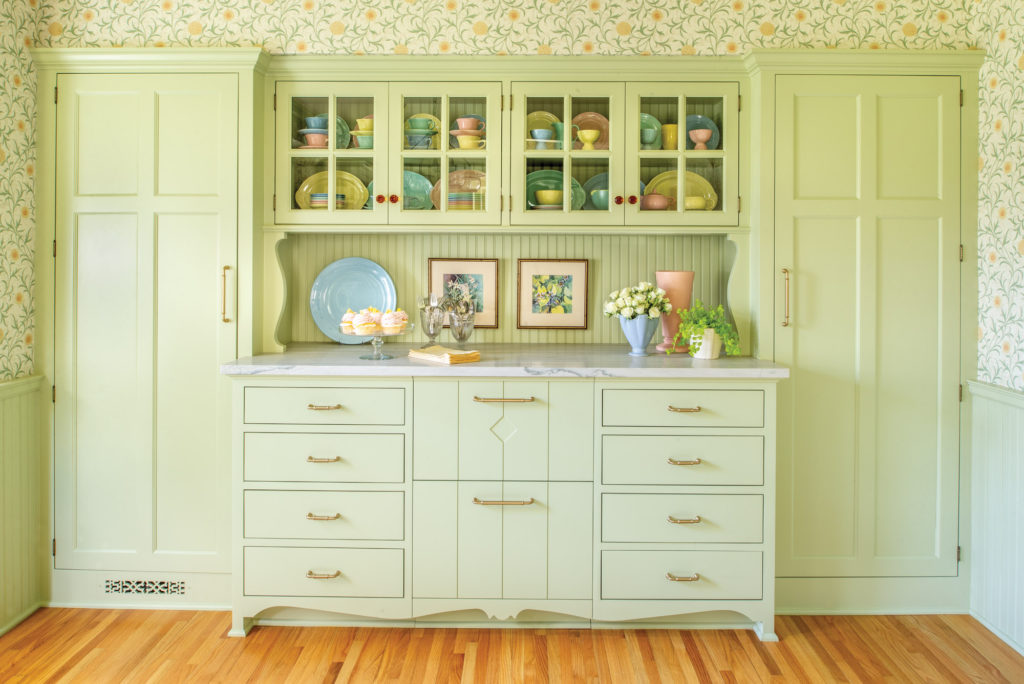 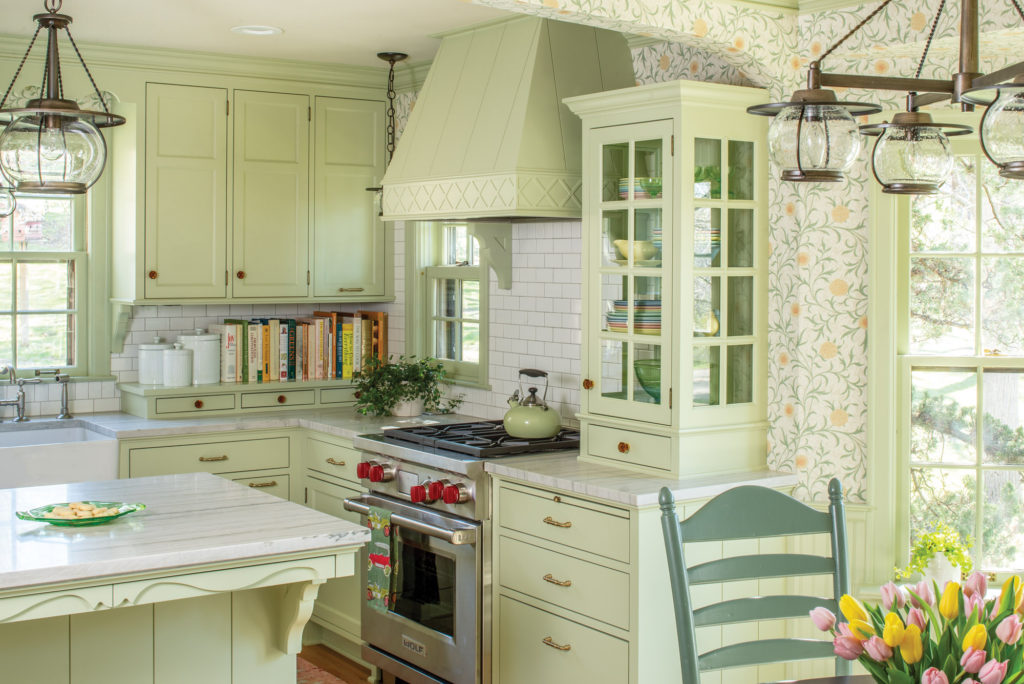 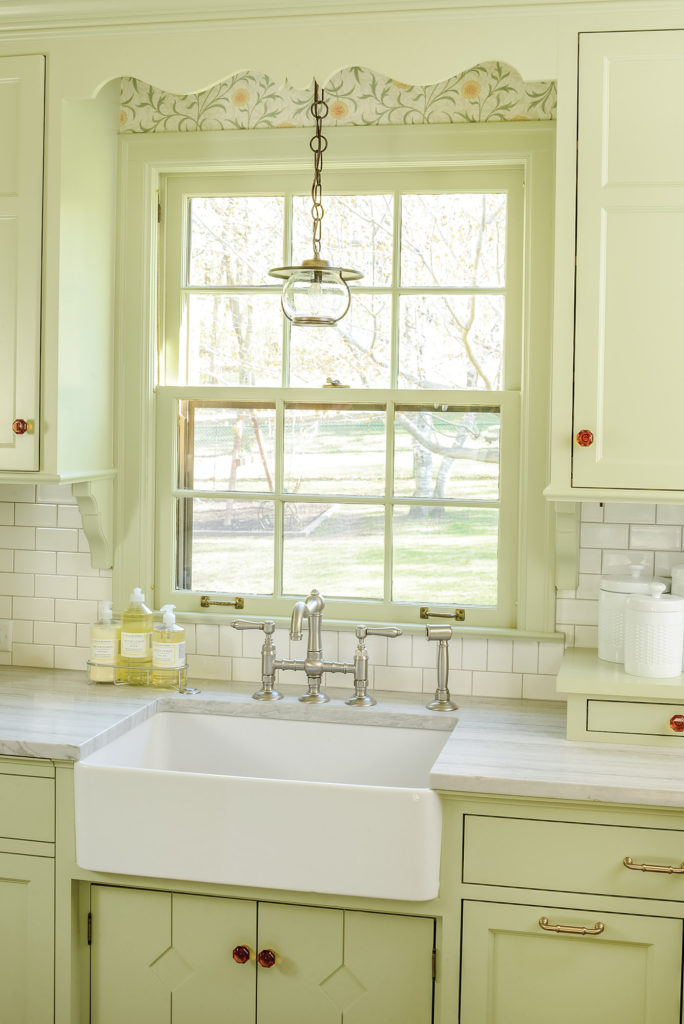 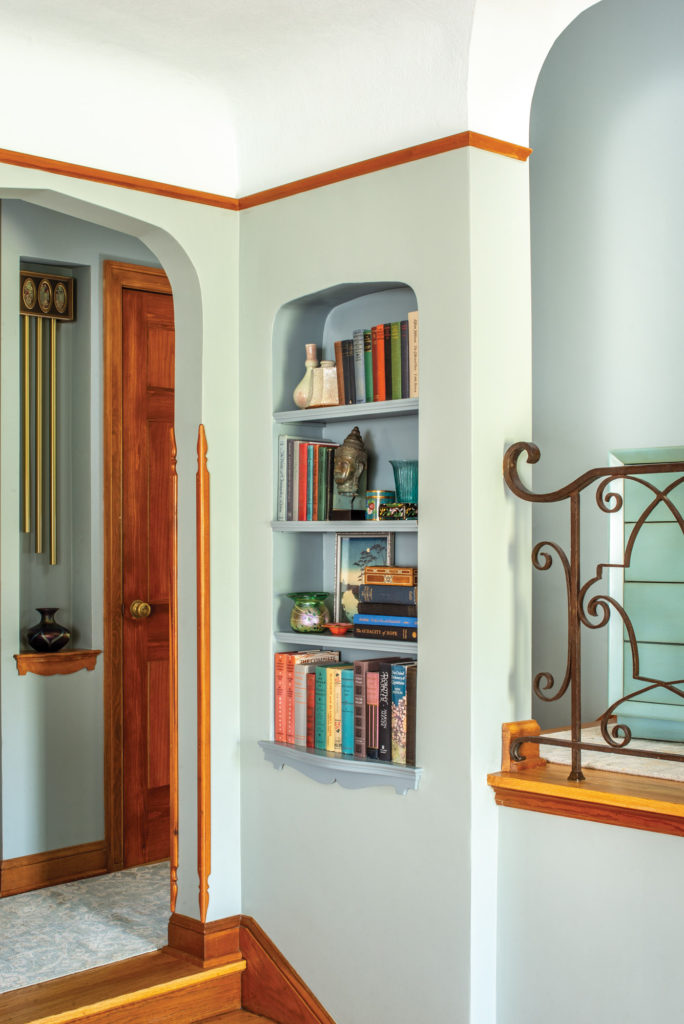 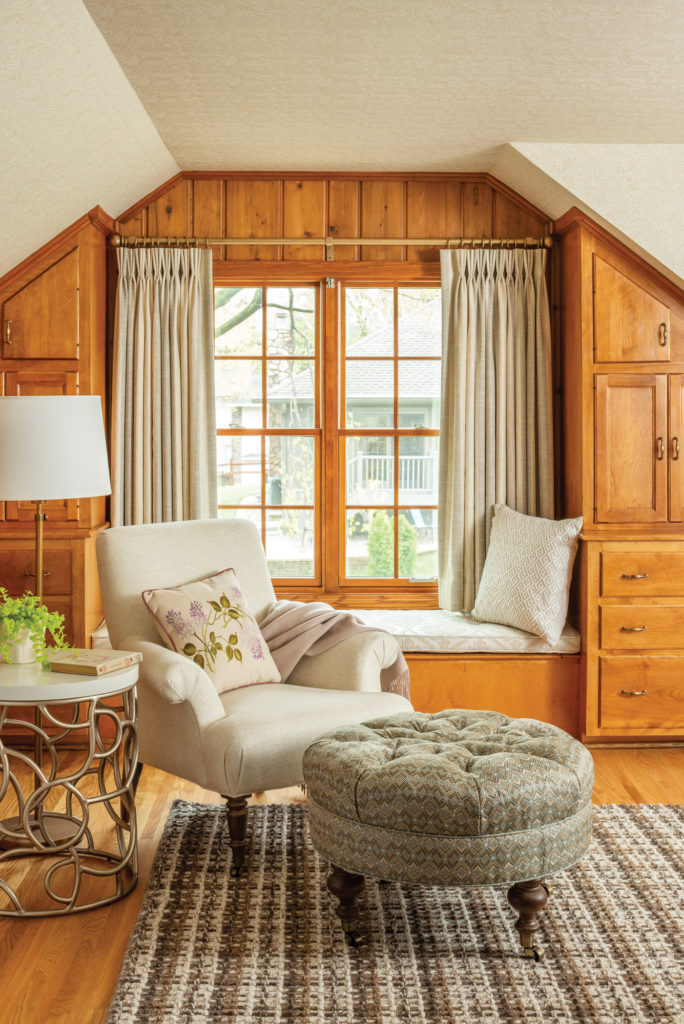 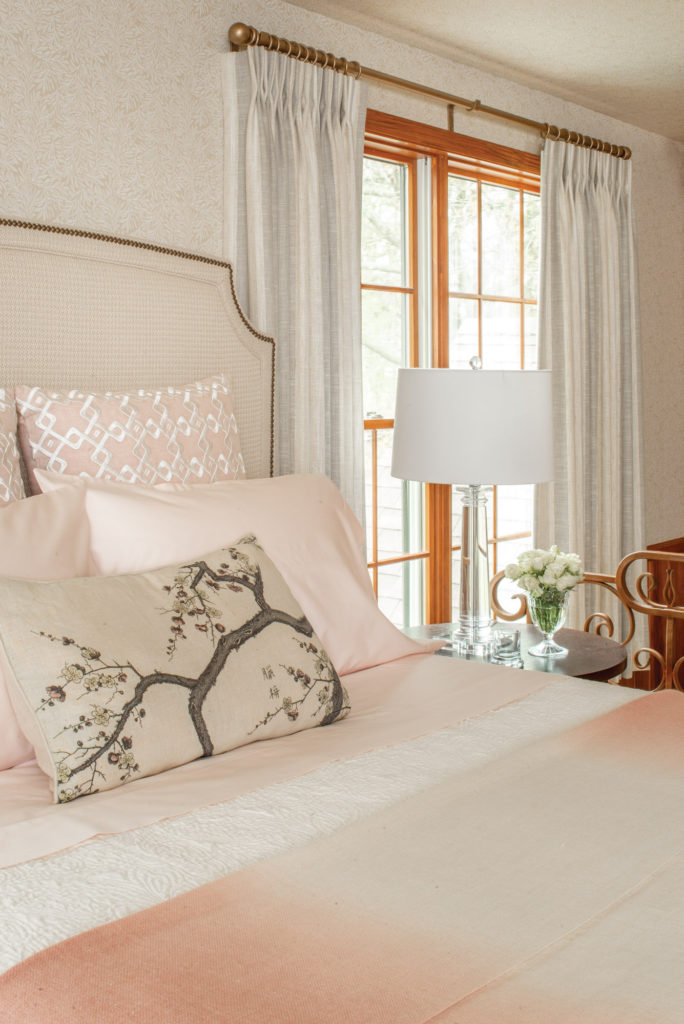 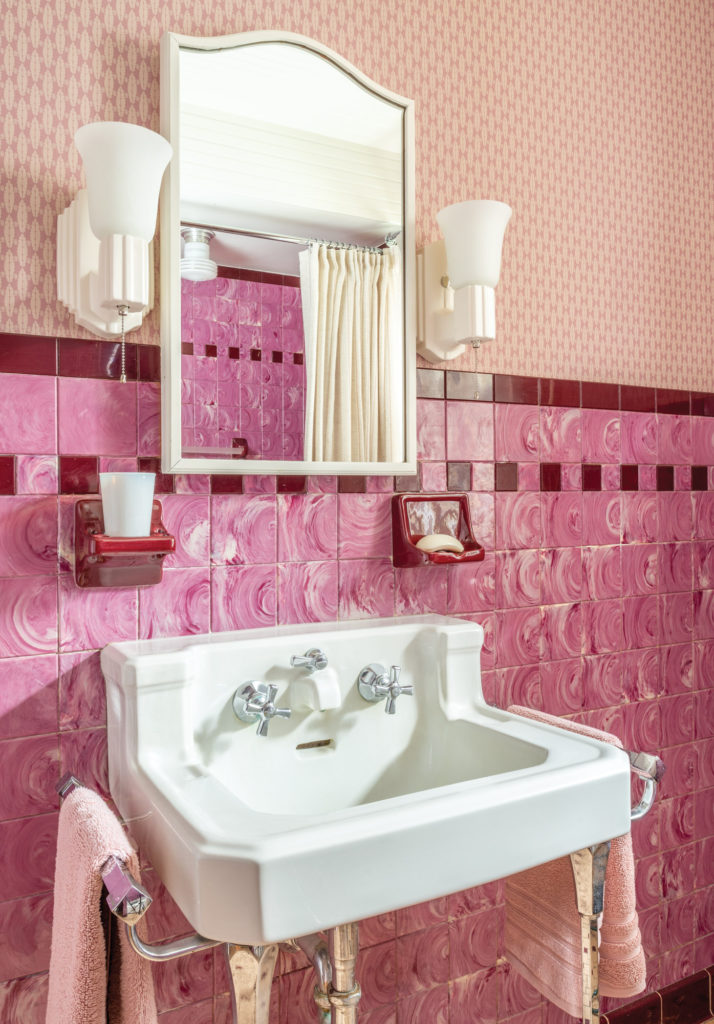 “Then I googled ‘historic house restoration’, and David Heide’s name came up. I will never forget the day David came to see the house. Honestly, within a minute I knew he was the one . . . he was excited and visionary—he knew more about the house than I did!—he understood the original design intention, and immediately I felt my appreciation for the
house coming back.”

The house was sound, Heide remembers, but “it lacked joy.” A series of tweaks brought it back: removing a fireplace insert, refinishing wood floors, adding period wall tiles to complement the original flooring in a bathroom, specifiying paint colors and wallpapers. As important is what the designers chose to leave alone.

The knotty pine is original. Joyce had toyed with the idea of updating it with white paint—something any other decorator might have championed—but Heide insisted they leave it clear-finished, as intended.

“If, when the renovation is finished, you still want it painted, I’ll do it myself, for free,” he told Joyce, who felt no need to take him up on it.

House styles of this period are not pure: “You might check the box ‘Other’, or maybe ‘All of the Above,” Heide quips. Elements of Tudor Revival, Colonial Revival, cottage style, and even a hint of Mediterranean show up in a historical pastiche that defines the era. In this house, the tiled bathrooms, wrought-iron rails, arched openings, and sunroom with awning windows are distinguishing features that were honored.

“David, along with his partner Michael Crull and design team Elizabeth, Chris, and Mitch, brought back the house,” Joyce says. “Everything looks like it was always here, like it belongs.

“My parents often did ‘the parade of homes’—open houses—but always came back saying, ‘we can’t find anything as sweet as this,” Joyce Block remembers.

The 1980s kitchen had been uncomfortable and cramped; a very large exhaust hood hung down over a center island, blocking the view to the breakfast room. The redesign features meticulous detailing to sync the new kitchen with the 1940s house. A decorative edge on the island camouflages two silverware drawers. The same detail—a refinement of one found on original cabinets—repeats in the window valance over the sink, in brackets, and in the skirt below pantry cabinets. The tall apothecary end cabinet is glazed on three sides.