When Janet and Kevin Conway went shopping for an Arts & Crafts bungalow in Spokane, Washington, they knew what they wanted—an unaltered home that had not been “updated,” one that had its original detailing and charm intact. They didn’t mind doing some of the work themselves, as they’d already restored a bungalow in their native San Diego. The Conways looked for months for “the worst house in the best neighborhood” until they found the perfect candidate: a 1916 bungalow down on its luck. It took courage just to approach the place. Old blue paint was peeling from the siding and the roof shingles curled with black mildew; a mattress leaned against one side of the house; Christmas icicle lights dangled across the front. Alongside an unattractive set of stairs that had been cut straight through the front porch, a carport jutted unceremoniously.

Inside, things were even worse. Incontinent cats had run amok, using carpets and a closet as a litter box; Janet and Kevin actually donned face masks against the odor. Green floral wallpaper peeled from walls, the bath was so full of mildew it would need to be torn down to the studs, and the original fir kitchen cabinets had been replaced with foamboard and particleboard. Down in the dark, forbidding basement, inspection revealed disconcerting cracks in the foundation.

Still, the house was more-or-less original. The floor plan had not changed. Original wavy glass hung in the old window frames. Although woodwork and mouldings had been refinished in paint or urethane, they were intact; the bungalow-era doors and built-ins remained. The wide front porch promised lazy summer afternoons, the unfinished attic a new office for Janet. Best of all, the neighborhood was ideal—close by historic parks designed by the Olmsted Brothers and within walking distance of shops and restaurants. Janet and Kevin bought the house and rolled up their sleeves.

Basics came first: new plumbing, and wiring brought up to date. The cracked, uneven basement floor had to go. Kevin jackhammered it and hauled away 300 wheelbarrowfuls of concrete. He replaced the floor framing, installed a sump pump for a bathroom, and finished the basement as a comfortable, 1200-square-foot family room and guest quarters.

As the kitchen was demolished, paint shadows revealed where original cabinets had been. New cabinetwork was made from old-growth fir to ensure a perfect match, and end-grain walnut countertops were selected to add a period note. Practicality dictated new appliances, although the 30″ Heartland stove and the Elmira refrigerator have retro styling.

The living room’s fireplace had been covered with unattractive bricks sometime in the 1970s. Grueby tiles were installed over the brick, and the entire fireplace given more presence with a larger, wider mantel that carefully reproduces the profiles of the original woodwork.

Ceilings had been sprayed, at some point, with a bad “popcorn” texture finish that was now loose and cracking. But covering it over with more drywall would have obscured the upper edge of the picture rail. So Kevin very carefully pried off the top section of moulding in every room, cataloging exactly where each piece came from. After he’d added crack-proof drywall over the ceiling, he nailed the moulding back in place. The ceilings were finished with ‘White Hyacinth’ from Sherwin-Williams.

Not only had all of the original woodwork and trim been painted, but also the hardware. And so every window latch, doorknob, hinge, and switch plate was methodically cataloged, removed, soaked, cleaned, polished, and replaced. Woodwork was stripped, sanded, and stained in place, a time-consuming process that took the couple more than a month, working seven days a week. Janet painted the rooms in warm, earthy tones from Benjamin Moore, inspired by the GuildCraft carpets: ‘Thyme’ in the living and dining rooms, with accents of ‘Turtle Green’ and ‘New Chestnut’; and the rich ‘Roycroft Adobe’ in the guest room.

Janet and Kevin had learned to save the floors for last, as they are subject to spills and damage during restoration. The wood floors—oak in the living room, fir in the kitchen, and maple in the bedroom—were refinished and sealed with a matte polyurethane finish.

The exterior, too, required substantial work, including foundation crack repairs and restoration of the botched front porch. The original cedar siding was patiently stripped and ground down to the original wood, and the house repainted in a becoming fall palette using Sherwin-Williams’ ‘Jute Brown’ on the body, with ‘Van Dyke Brown’ on the trim and ‘Fireweed’ on the window sash.

The Arts & Crafts movement is a philosophy and a way of life, Janet and Kevin strongly feel. Their goal was straightforward: They wanted to create a home filled with honest work and the beauty of Arts & Crafts period design, as a backdrop for a life lived in appreciation of simple pleasures. 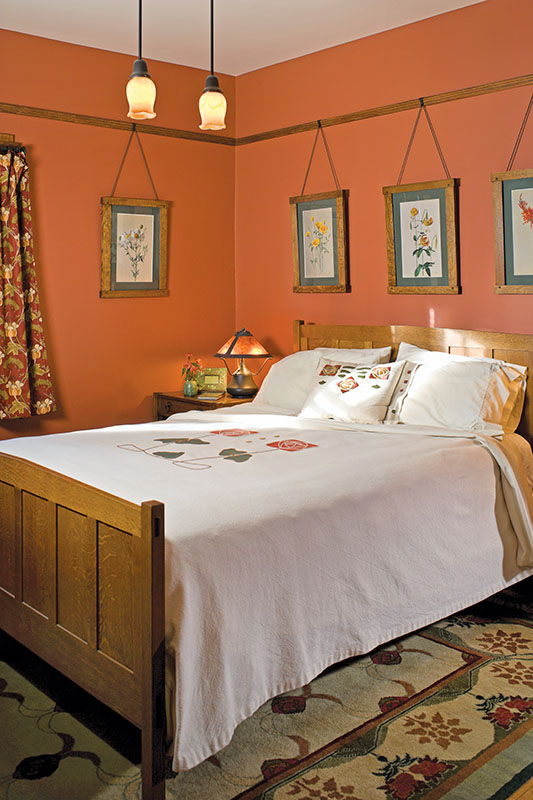 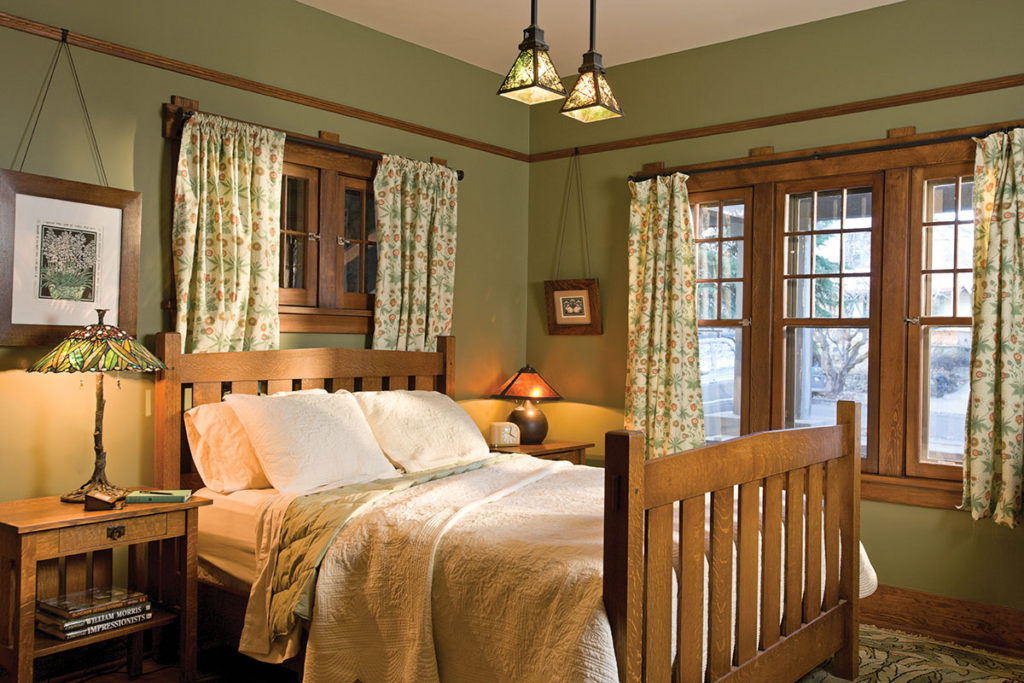 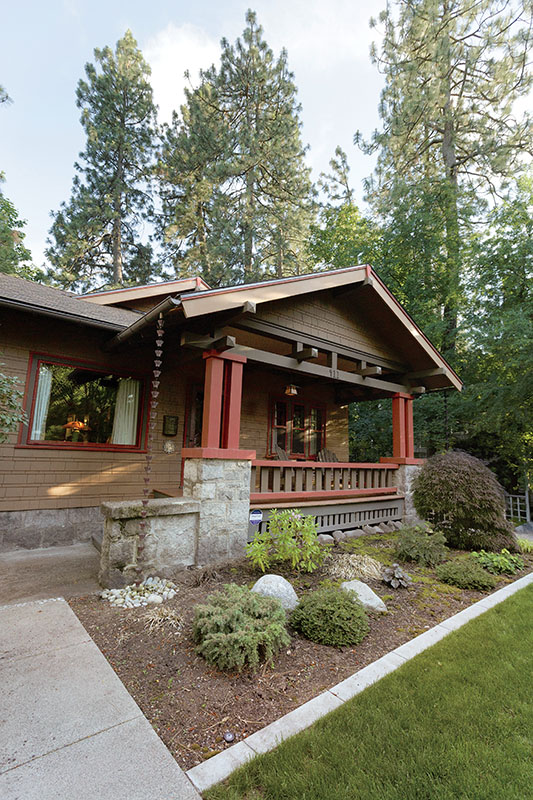 The Skinny from Experienced Restorers.

Janet and Kevin Conway successfully restored two Arts & Crafts-era homes, and have some practical advice to pass along.

The Right Roof for the Right Style