This 1930s English Tudor sits in a little corner of paradise known as East Moreland, in Portland, Oregon. Molly Reed had the good fortune to be born here—in this very house, in fact; her parents were its third owners. Well-used white metal cabinets and blue Formica countertops fill her childhood memories of the kitchen. “My parents remodeled it in the late 1970s,” Molly says, “with very dark cabinets, avocado linoleum, and wallpaper.” Her mother redid the kitchen in 1995, this time with square-tile countertops, whitewashed cabinets, and a wood floor. Then Molly married Blair (BJ) Reed, they started a family, and bought the house for themselves.

“BJ made drawings of the direction we wanted to go, for the kitchen and its connection to the backyard,” Molly says. They wanted a covered patio with a fireplace. The couple interviewed three general contractors, asking for recommendations for designers. It was Matthew Roman, known for upholding the integrity of period homes, who rose to the top.

Matthew says that when he met Molly, he didn’t know she’d grown up in the house. “But one of my aims always is to reference original elements, reiterating the architecture in any new design—and I think that made her happy.”

Molly confirms it. “Matthew noticed the Tudor arches in the front room, dining room, and hall, and he echoed them in the kitchen, even using the same corbels that are on the façade.”

Right Angle Construction was the general contractor. Their network included the plasterer who matched the hundred-year-old stucco, the tile company who took on the mosaic kitchen floor, and a fine cabinetmaker. “It was a good experience,” says Right Angle’s Tom Corvi, “because Molly knew what she wanted and Matthew (Roman) had good ideas that were not necessarily the norm, and a good set of plans.”

Roman’s design sought to connect the house, a new outdoor room, and a detached (but close-by) garage with a covered walkway that met the zoning board’s standards, which don’t allow attached garages on the property line.

A larger bumpout was built in place of the small breakfast bay to create a room within a room with space for a farmhouse table made from 1907 floorboards salvaged nearby. Its turned legs match those on the island. Molly’s father, who was a lumber broker with a penchant for natural wood, inspired the kitchen’s walnut cabinets that nod to an English Tudor feeling. Molly suggested using painted grey cabinets inset with milky glass on one wall, breaking up the expanse of walnut and tying in the painted island.

Outside, “for the pergola’s beams, I wanted to repeat the scalloped beams found on the front of the house,” Roman says, “but it’s expensive custom work and I thought it might not happen. Tom Corvi did an excellent job within the budget.”

“The exterior design was a challenge,” Corvi says, “but Matthew and I worked together to hide the conduit wiring, and to add flashing to make it weather resistant.” Corvi reclaims or recycles everything his team demolishes, removing it to such venues as Portland’s Rebuilding Center; in this case, the original windows were reinstalled in the new breakfast area.

SOLVING THE GARAGE DILEMMA
Designer Matthew Roman’s biggest challenge in designing a detached garage on the property line, given a height limit, was tying the new structure to the old house. Here’s what he did:

KITCHEN DETAILS
Countertops are a quartzite marble that comes close to granite in its hardness, and looks like Alaskan marble, but without the staining or acid etching to which marble is subject. The painted schoolhouse glass shade was found on eBay. The cabinets are Eastern walnut, the recycled butcher-block top is redwood. The island is painted grey.

A generous cooking island topped by a custom hood divides the kitchen triangle from the breakfast room beyond the wide Tudor arch. Note how the mosaic “flowers” in the tile floor are connected to create a diamond-motif tile rug in the eating area.

OUTDOOR CONNECTION
Homeowner Molly Reed loves to cook and entertain. By connecting the extended kitchen to the outdoor room tucked next to the new garage, she gained usable square footage and a connection to her garden.

One wall of the garage creates enclosure for the outdoor room. A second, uncovered outdoor seating area is anchored by a fireplace. It’s trimmed in basalt to reiterate the basalt columns found in the shared driveway.

From the kitchen, a Dutch door and large windows open to the outdoor dining room. 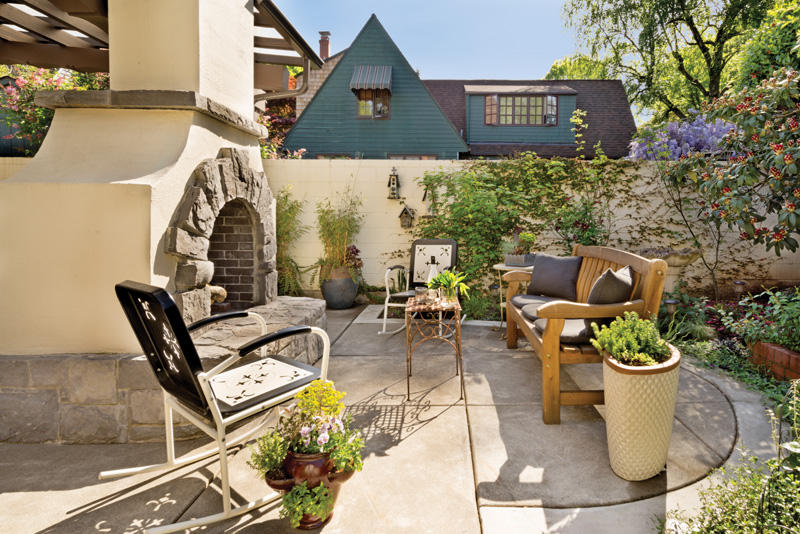 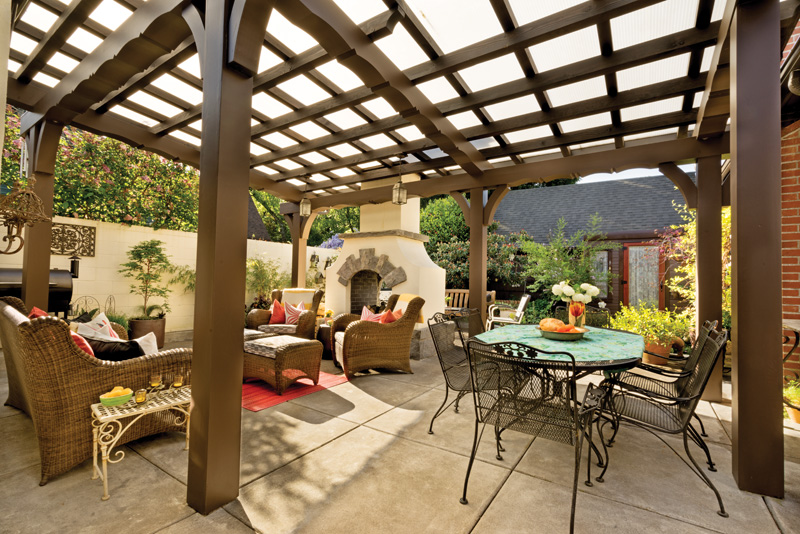 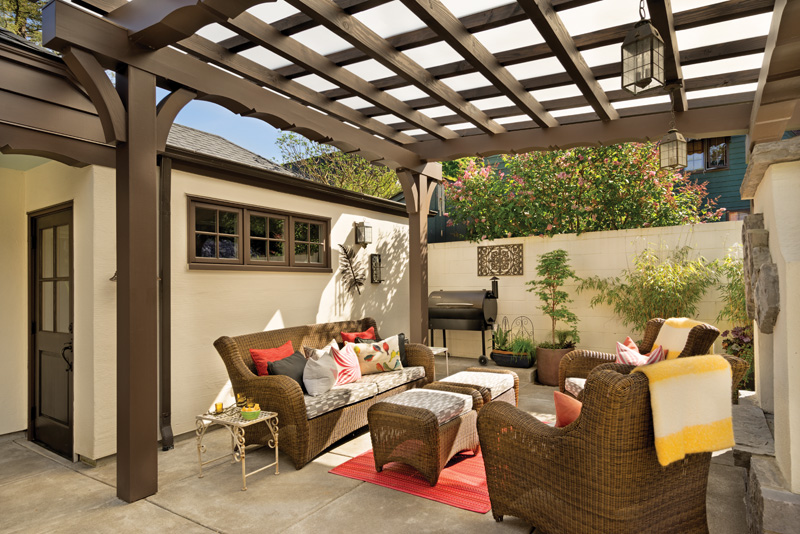 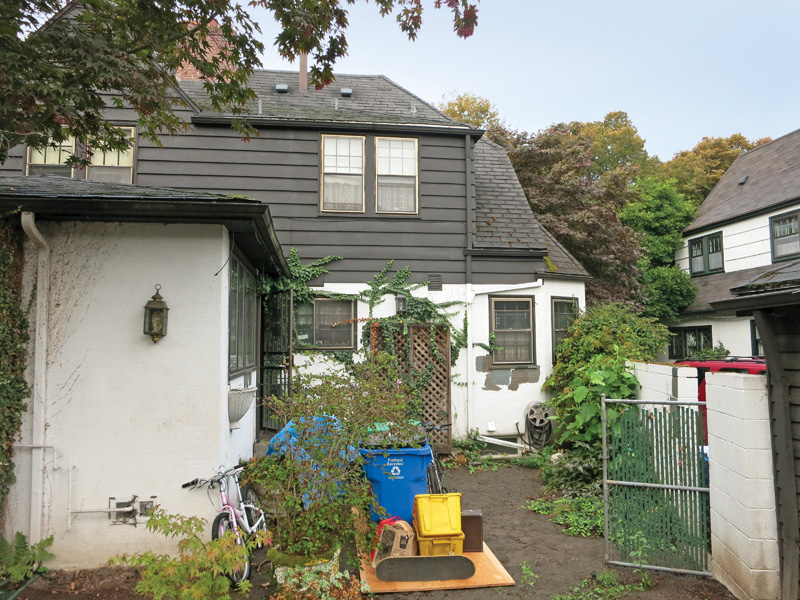