When the last parcel of buildable land on Peaches Point—the very outcropping where her grandmother and aunt had owned homes and where she spent her holidays—came up for sale, she jumped at the opportunity to purchase it. With only 12 hours to decide, Shepard made an offer from California where she was living at the time.

Once she passed papers on the land, she began her search for an architect who could design her a house that would fit into this well-established New England neighborhood. 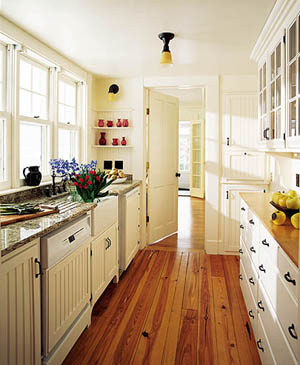 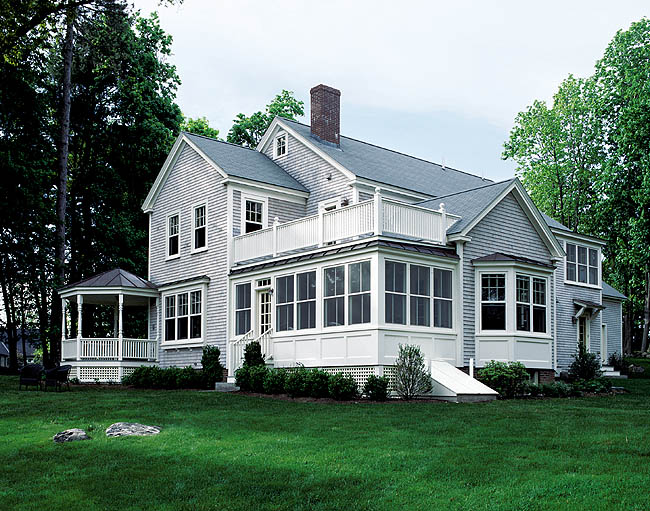 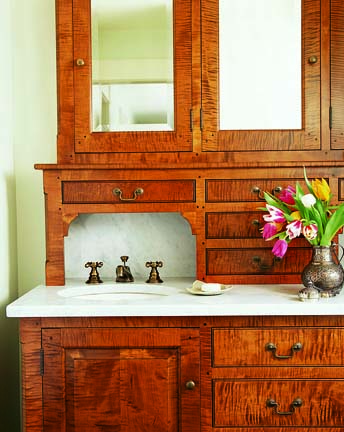 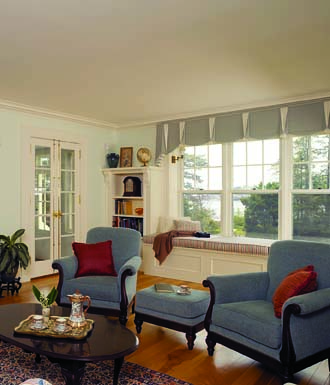 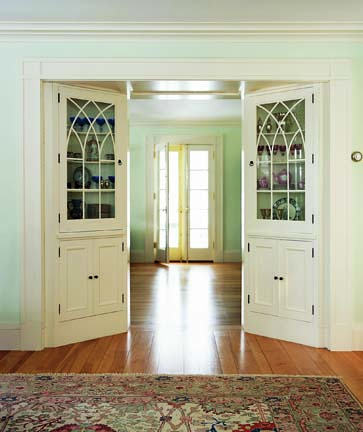 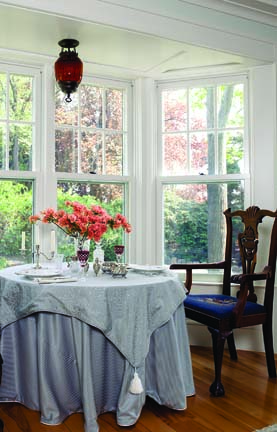 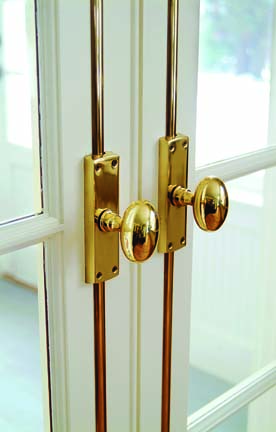 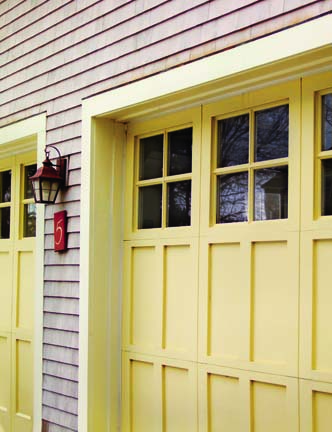 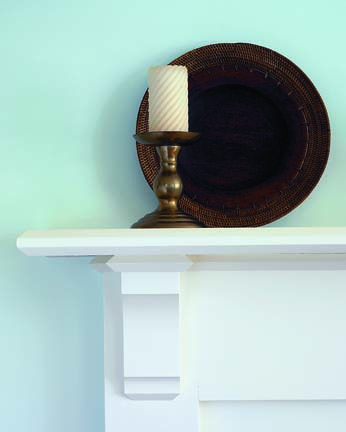 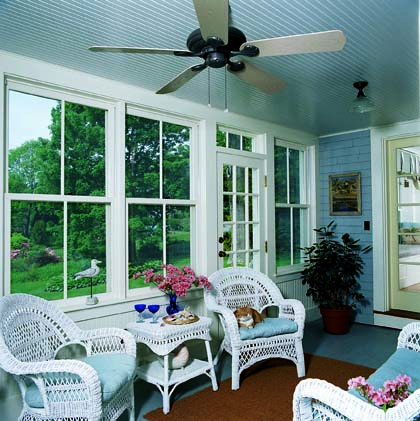 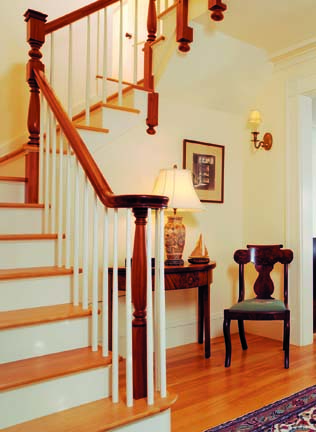 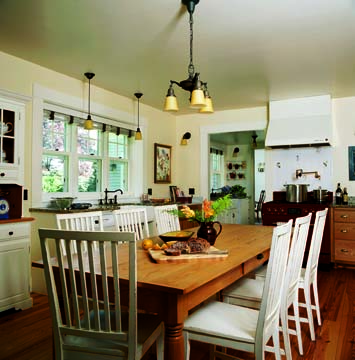 “I didn’t know what style I wanted, but I wanted the house to look as if it’s always been here,” says Shepard. She hired five architects to draw up conceptual designs. After reviewing various plans that weren’t quite right, Shepard’s partner, John, suggested that she contact Sandra Vitzthum, an architect he met while studying anthropology in Bali. “When we spoke, Rita couldn’t articulate a particular style, but she knew she wanted something simple and comfortable,” says Vitzthum. Shepard described a house that would allow for cross breezes, seasonal porches, and a floor plan that would take advantage of the property’s water views. She also described a house that would be cozy for just her and John, yet roomy for when her children are visiting.

Shepard also wanted the house to sit well in its location as well as with her neighbors, who would be in close proximity once the house was built. She didn’t want her new house to interrupt the historical integrity of the neighborhood. “This spot is great for Rita who is very social,” says Vitzthum. “She has extended family on the point and is very attached to this place.” They drove around Marblehead looking at various styles of architecture that had cropped up during its 300-plus year history. Shepard was drawn to the New England vernacular farmhouses with flourishes of the Greek Revival style. A direction for the house design had begun its course.

Order of the Day

Vitzthum is well versed in the vocabulary of the Greek Revival, having grown up in Montpelier, Vermont, where it is a prominent style. Today she lives in an 1843 Greek Revival farmhouse in that same town. “The Marblehead house has a diluted order of the Greek Revival. The elements and proportions are there but not the ornament,” she says. “The architrave has been taken away. The rake molding is simplified. There’s a discontinuous frieze across its gable end.”

Another important factor in the house design is the way it sits on the pie-shaped parcel that has partial water views in three directions: Salem Harbor, Marblehead Harbor, and the Atlantic. It was critical that the layout take advantage of these vistas. Vitzthum created a floor plan based on Frank Lloyd Wright‘s pinwheel designs. “The plan hides the massing visually and breaks down the space, making the house appear smaller than it actually is,” she explains. Wings extend off the main structure, offering peeks of the water from every room. “The house is meant to be seen three dimensionally-there’s no grand faade as you would see on a Georgian house,” she adds. The house also appears to have evolved over a long period of time, with open and enclosed porches “added” to the main structure. Vitzthum also kept in mind the way the house would take advantage of the sun’s movement-the living room faces south toward Marblehead Harbor, the garage is tucked to the north, while the kitchen faces east to catch the bright morning rays.

Although the house is designed with traditional spaces (an eat-in kitchen, a dining room, and a living room), these rooms unfold into one another through custom-milled French doors, creating a circular flow-the enclosed porch also opens into both the living room and the dining room, while three sets of French doors in the living room lead onto the front open-air porch. “The house works beautifully for parties,” says Vitzthum. Although Shepard wanted the house to accommodate entertaining, she also needed private places where she can work (she is a professor of both archeology and anthropology) when guests are visiting. Vitzthum designed a study on the first floor that could be closed off from the rest of the house while family and friends could enjoy the camaraderie the other rooms so amply afford.

Another important aspect of the design for Shepard was the kitchen. She loves to cook and have company while doing so. “I live in the kitchen,” says Shepard. The room is spacious and has three windows over the sink that allow for ocean breezes and morning sun. “Kitchen dressers,” resembling pieces of furniture, offer loads of storage. Off the kitchen is a butler’s pantry, which has an additional sink and dishwasher as well as cabinets for china.

Vitzthum created a hierarchy of space throughout the house with the use of molding profiles. Detailed cornices, baseboards, and window and door casings were incorporated into the formal rooms, though the pantry, kitchen, and bedrooms lack ornamentation or have simple bead board wainscoting. Vitzthum chose to use bands of six-over-one true divided single-paned windows for the kitchen, dining room, and living room. Though not historically accurate, these bands offer extensive views and cross-ventilation throughout the house. Vitzthum also incorporated familiar accents to the house, such as a replica of Shepard’s grandmother’s front staircase found just down the road. The fireplace mantel profile was created from a measured drawing of Vitzthum’s own 1840s Greek Revival mantel.

Vitzthum approaches architecture with a touch of anthropology-her second concentration while studying at Princeton University. “I try to be as objective as possible when designing a house and ask how will the family use the space,” she says. “I immerse myself in a place, study it, learn it. It is no longer a matter of ego when you are doing what is right for the place.” This strong sense of place comes through in her designs. Vitzthum looks at the way the existing buildings interact with the street and the surrounding houses to create a design that is right for its location. “It’s a matter of focusing on the place and the people. You need to put the design in the context of its surroundings,” she says. “Architecture is like poetry-pieces fit together in a certain way to create beauty.” She also believes style is a perfect fit between form and function—a perfect fit between people, places, and materials. And this vernacular farmhouse is right in step with the essence of this special place Shepard calls home.