Given its historical motifs, the architect’s famous name, and this owner’s perfect pitch, no wonder this garrison Colonial looks so authentic. The house is, nevertheless, a mid-20th-century reproduction built in North Carolina’s Piedmont, not far from Raleigh.

The house, built in 1949, shows how comforting the style can be. Initially a straightforward, gable-end block with a jetty or overhang at the second floor (making it a garrison house), it’s a solid postwar example. The designer was Boston architect Royal Barry Wills (1895–1962), the renowned proponent of adapting traditional New England house designs, especially Capes (but also garrisons, saltboxes, and churches). These New England “Colonials” were modern, built with electric kitchens, ductwork, closets, and mid-century bathrooms. Their rooms interpret the good old days as, perhaps, we wish they had been.

This one is particularly well dressed; homeowner Lucille Vuncannon is a decorator, her husband a builder/renovator, and their son a residential designer. “In this house and for my clients,” Lucille says, “I create warmth using American Colonial motifs with functional furniture, mixing New England antiques, painted Southern furniture, and the Baroque. I also have a passion for fabrics—toile, embroidery, documentary prints, flame-stitch, tapestry, damask, checks and plaids, and fringe.” The result is layered rooms, old-fashioned but not fussy, offering an all-American familiarity and comfort.

When the Vuncannons purchased the house in 1987, it was in good condition. Determined to keep it authentic, they even upgraded a few details in period style. Lucille was the decorator; Wade Vuncannon did the work; son Randy designed the additions. The house got upgraded central HVAC, plumbing, and wiring. New dormers added living space on the third floor, and the house was reroofed in cedar shakes.

An addition involved removing the rear roof, raising it for a two-storey gambrel that holds a master bath with closets and laundry above, and adding eight feet to the family room.

Original heart-pine floors were freed from overlaid carpet and linoleum. The flooring was matched in additions. Beyond the gambrel end of the house, a breezeway connects to a pretty little building that holds the garage with an office upstairs. A formal boxwood garden connects the buildings.

The classic kitchen is a redesign featuring raised-panel woodwork and a cooktop in a hearth-like alcove. The breakfast room and butler’s pantry were new, period-appropriate additions. The spit-spot pantry is in Colonial Revival style with white-painted cabinets. Familiar motifs in the cheery breakfast room include arch-top cabinets, a checkerboard floorcloth, and painted country Windsor chairs.

Especially for Colonials and Dutch Colonials, the sunporch was a favorite in early 20th-century homes. Here, one was added at the same time as the butler’s pantry. Revival window treatments (designed by the owner–decorator) feature a scalloped pelmet and side panels in a floral print. In this room, a painted corner cabinet is a Pennsylvania piece.

The expanded family room is nostalgically “Colonial” with a salvaged 1830 Federal fireplace mantel displaying a collection of pewter. New Federal-period woodwork was designed to match that mantel. The keeping room is rustic; it was once part of an original back porch, and retains its brick floor. The fireplace wall had been added by a previous owner.

In the house, samplers on the walls date to the 19th century; the Canton and Delft china are the real thing. “I’m also an antiques dealer,” Lucille says, “so we were able to furnish almost completely with antiques.” 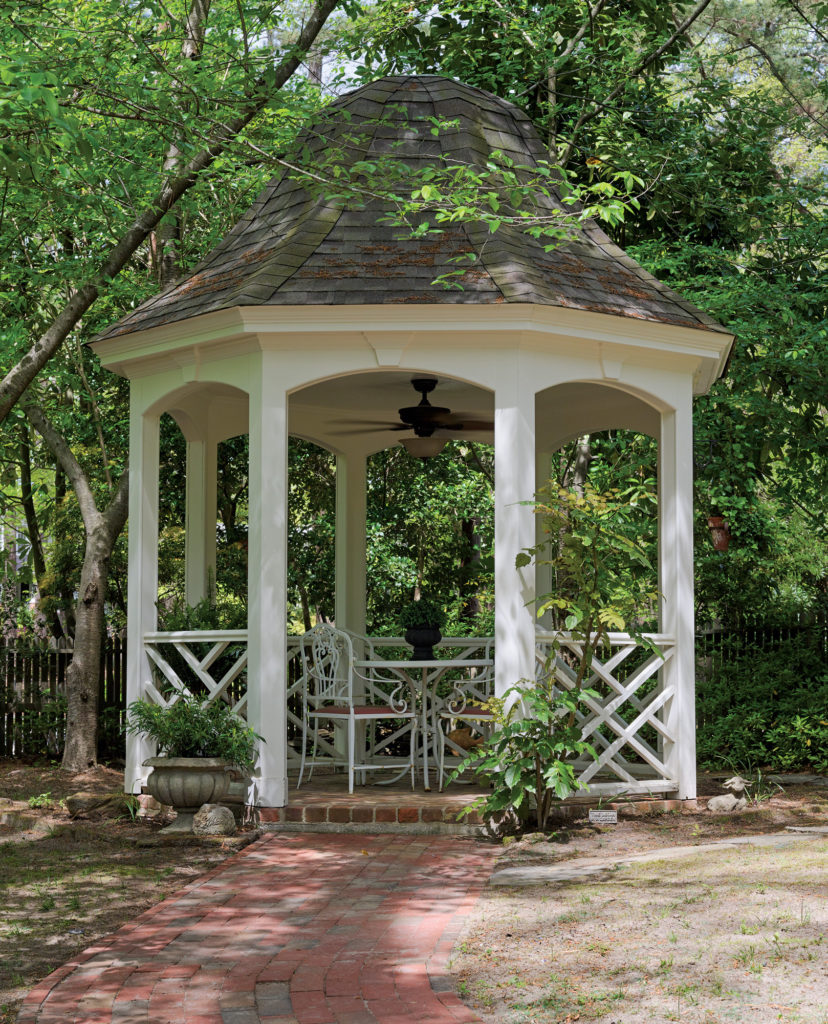 The gazebo has a Williamsburg design with Chinese Chippendale railings and a brick floor. left: The front door, once very plain, was replaced with a custom cross-battened door featuring arched lights (windows). ">A striking paint-decorated floor—with a star medallion overlaid on the diagonal checkerboard—elevates the screened porch. ">Wainscoting and the fireplace wall with Georgian paneling are original; woodwork was painted in a historical color over the original stain. The needlepoint firescreen is antique. ">In the family room, antique blue-and-white Delft china is displayed in the 19th-century Virginia corner cupboard. ">With its old brick floor, the rustic keeping room was part of an original back porch. ">Yellow- ware and French tole is displayed on the painted European cupboard. opposite: (bottom) The revival window treatment was designed by the owner for the new but very traditional sun parlor. ">The Colonial Revival pantry beyond the redesigned kitchen was added by these owners, who placed a cooktop in a hearth-like alcove. ">Part of an addition, the sunny breakfast room has a scrub-top hutch table and country chairs set on a painted floorcloth. ">
Gallery10 Images

The Boston architect Royal Barry Wills wrote that he found the simple plan of old Capes and Colonials “almost as modern as Modern.” Intrigued by small houses—especially Cape Cod cottages, saltboxes, and garrison colonials—he opened a one-room office on Beacon Street in 1925. Hardly replica houses, his designs accommodated indoor plumbing, closets, central heat—even a garage. He was adamant about scale and details, adding large chimneys (like the originals), authentic entry treatments, and well-appointed fireplaces. He specified lilacs and hollyhocks for the gardens.

Wills attracted national attention during the 1930s. By the 1950s, Royal Barry Wills Associates was one of the most popular architecture firms in America. Famous for New England adaptations, they also designed in Tudor, French Provincial, and Modern idioms. Through the use of wing extensions, rooflines, and proportion, even the larger houses avoid ostentation. The firm continues today, headed by Wills’s granddaughter and her husband, both architects.