Built in 1954 for Edith and Saul Lipkind, this circular house in the woods was designed on a modest budget “for a working-class couple”—Saul was an actuary, Ditta a physical therapist. It was constructed from inexpensive materials: cinderblock and glass, cement, and redwood- veneered plywood. The house contains only a thousand square feet, and has just two bedrooms with no attic or basement. But its placement, and layout, are spectacular.

The mid-century architects were Peter Berndtson (1909–1972) and Cornelia Brierly. The two met as Taliesin apprentices working for Frank Lloyd Wright in Wisconsin. In their 1980 book about Berndtson, Organic Vision, Donald Miller and Aaron Sheon wrote:

“In the case of the Lipkinds, there was an innovative plan on a limited budget. Conceived by Cornelia, the circular plan was designed for a wooded lot set high on a hillside. Perhaps inspired by plans for the David Wright house (1950) by Frank Lloyd Wright, the Lipkind house is designed on a ten-degree module, with support beams set on a concrete block foundation. A small pool is the center of the design . . . Each room looks over the balcony deck, which is cantilevered over the hillside.

“The impression one has inside is a cozy chalet set in wild nature. In fact, the home is not far from a major expressway, yet the design has taken that into account and there is little exterior noise.” 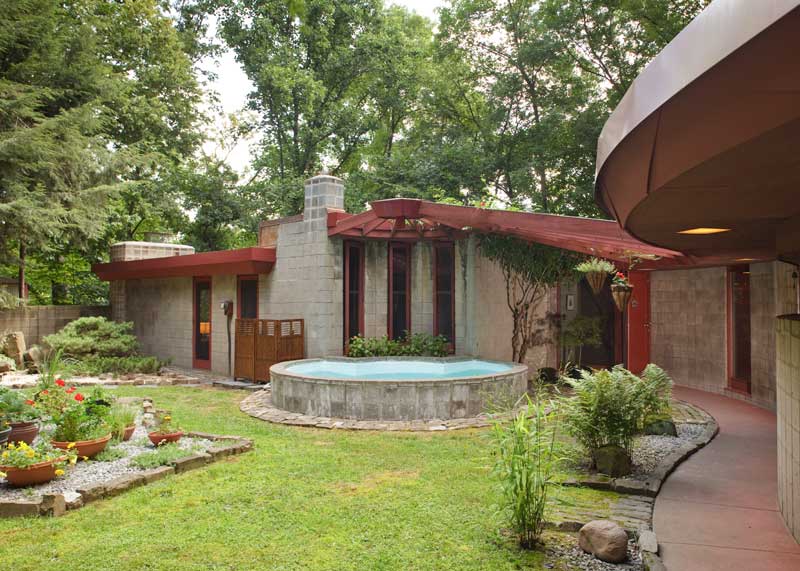 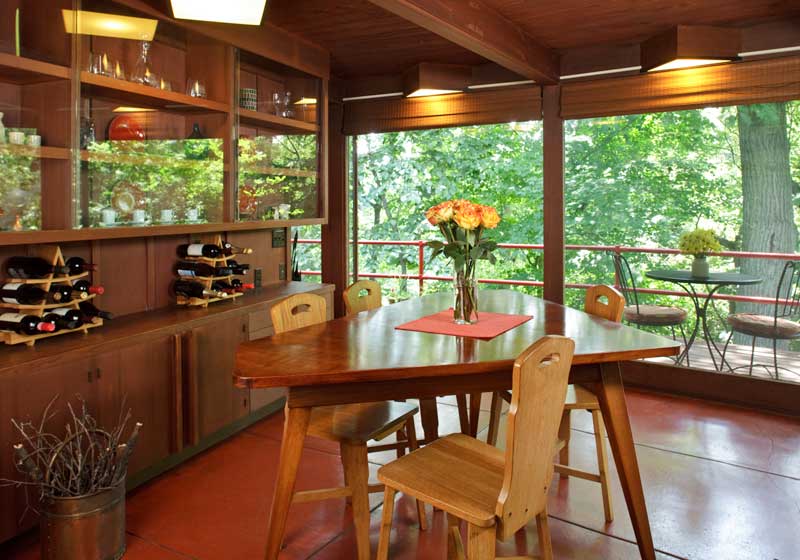 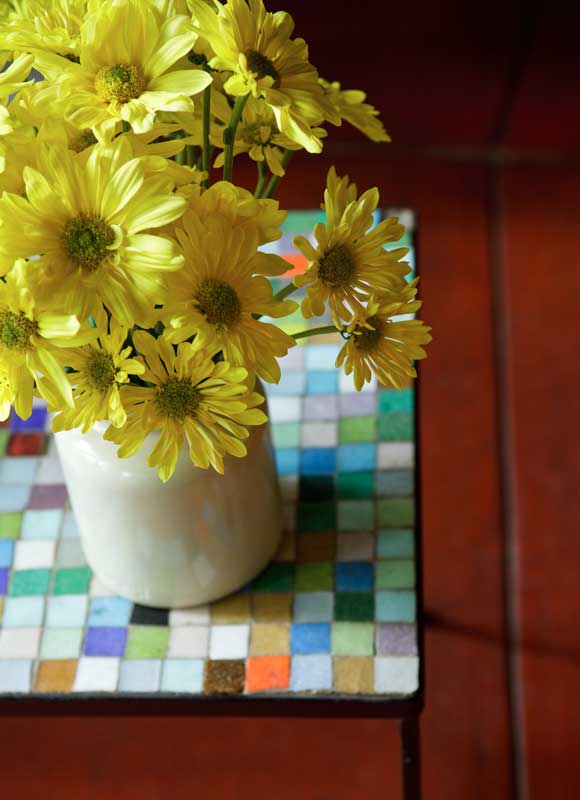 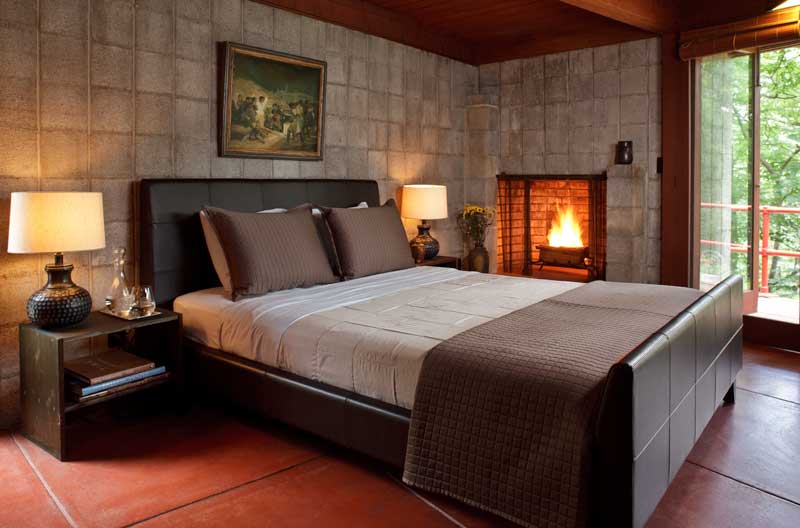 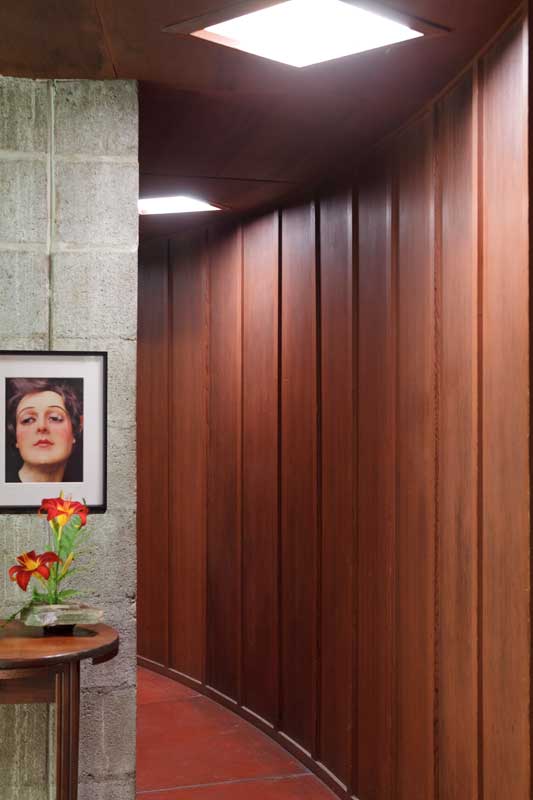 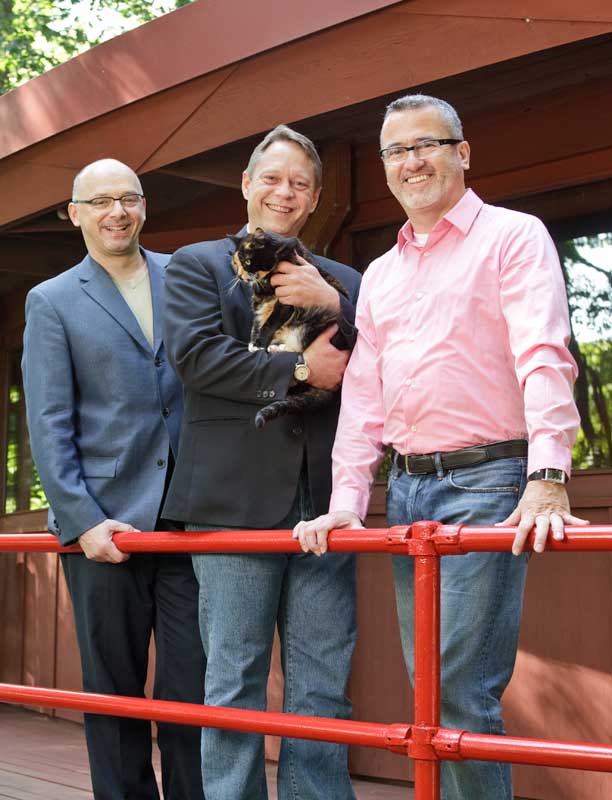 Current owners Bob Moore and Scott Wise had been looking for a house “a little out of the ordinary,” something with history and character and enough outdoor space for a small garden. They’d seen several homes by Peter Berndtson and were intrigued by his elegant designs, but the architect’s houses rarely came onto the market and always sold immediately.

Then a relative alerted them to an unusual Berndtson home in Swisshelm Park, a neighborhood in Pittsburgh’s East End. The two wasted no time; after one viewing, they made an offer. The house was in near-original condition, but worn down; the Lipkinds had lived here for over a half century until Ditta passed away in 2006. Scott and Bob became the second owners.

Pittsburgh’s harsh climate had taken its toll: The roof had failed in several areas, there was water damage on the wooden ceilings and walls, and the wiring was never updated. Bob and Scott spent several months washing interior woodwork. Originally treated with Cabot’s redwood stain/wax, but never sealed, it was dirty and had lost its shine. With the help of friends during several “scrubbing parties,” they washed walls, tongue-and-groove ceilings, and built-ins. They deep-cleaned the red concrete floors; the radiant under-floor heating still worked after more than 60 years.

How to Stay in a Frank Lloyd Wright House

The exterior needed restoration, too. The redwood-veneer plywood had been water-damaged, so areas were re-stained or replaced. The house has seven skylights integral to its design, all of which leaked because of earlier roof work.

The house is set in a wooded lot overlooking a steep ravine; it follows the contour and is cantilevered over the hillside. The radial design is supported by a central circular cement block with support beams radiating outwards. All rooms but the utility room are on the outside edge of the semi-circle, with ever-changing views of the leafy canopy. It’s like living in a glass tree house.

A Touch of Luck

Bob and Scott were fortunate enough to meet Cornelia Brierly, Peter Berndtson’s ex-wife and the co-designer of the house, on a trip to Taliesin. At the age of 93, Brierly still had a sharp memory of the house and gave the partners indispensable advice. Built-ins were restored, along with furniture left with the house. Preservation architect Jerry Morosco designed the update of the guest bath—which required tearing walls down to the studs because of extensive water damage. Woodwork and chrome fixtures are based on examples in the house.

After five years of work, the focus is on a complicated project. Berndtson had applied decorative detailing to the roof, which was replaced with brown aluminum when the roofing was replaced. Originally, a narrow copper band had glistened at the top of the roof, and the fascia had a course of thin, triangular plywood sheets intersected by 4×4 redwood diamonds painted Chinese red. The effect was of a decorative crown encircling the top of the house. Several discarded redwood diamonds have been found in the woods to guide reconstruction.