When architect Rafe Churchill first met his clients at a party and they started describing a green house project idea, he had mixed emotions. “I initially walked away because I didn’t feel anyone could be that serious about such an undertaking,” Churchhill recalls. It wasn’t that his and his brother Seth’s third-generation family-owned company couldn’t handle the task; it was more about whether or not the client really understood the magnitude of what they were proposing: building an authentic new old farmhouse with all the modern amenities in a remote rural area with renewable energy systems.

“We spend a lot of time up front ensuring the impending work is exactly what the client really wants—both for the short and long term.” In this particular case, the client’s persistence brought Churchhill back to the design table. “Ultimately, we realize that the work we do is only as good as our clients,” he observes. “Despite the complexities of this project, we felt the client fully understood all the inherent difficulties, which made it easier to accept the challenge.” 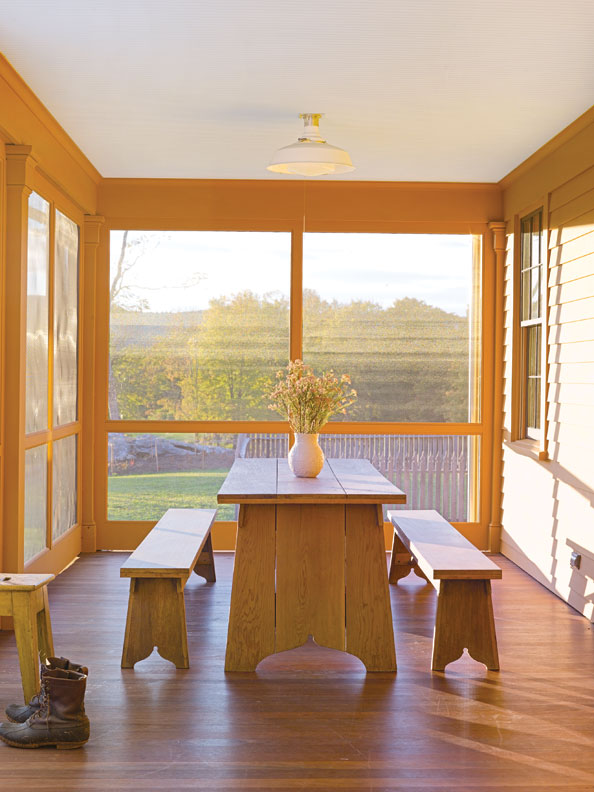 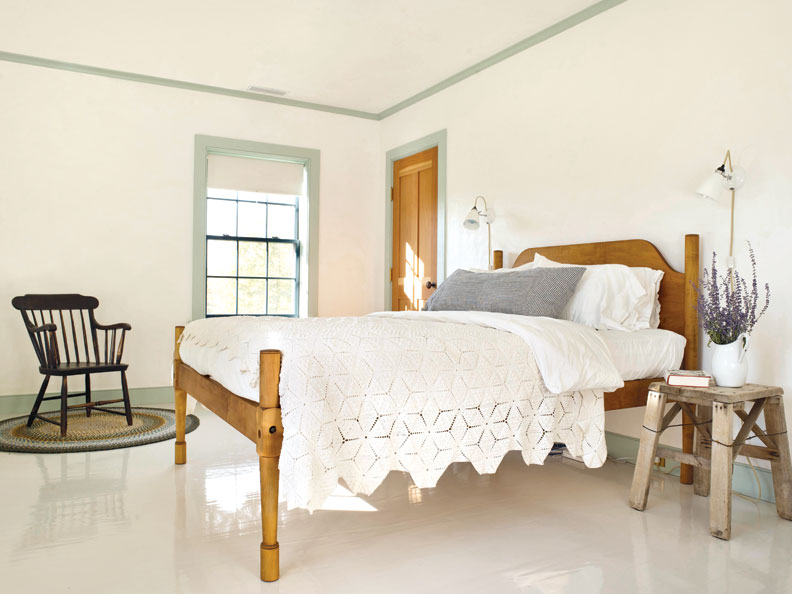 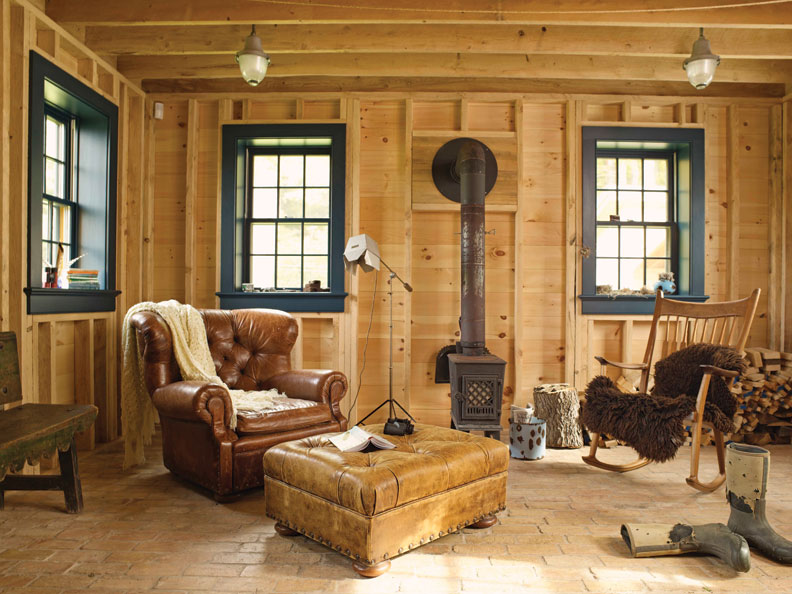 The property is 125 acres of some of the most beautifully diverse countryside found in New England: rolling hills, open fields, wooded borders, rocky outcroppings, rippling streams, a pond or two—a veritable four-season sanctuary appreciated by humans and wildlife alike. Even though the build site is on the portion of the property closest to the main road, the acreage is set back a ways. “You only see the very top of the house at a distance when you turn into the driveway,” describes Churchill. “Then, as you drive through a rising meadow, the entire structure slowly reveals itself.”

There, sitting atop a hill overlooking a pond, stands a 4,500-square-foot new old farmhouse complete with modern amenities, four bedrooms, two and a half bathrooms, and a cozy bunkroom in the attic. The final floor plan was predicated on a traditional rendering of a center-hall Colonial. But to make the outlying rooms feel less isolated, the design team made the center area a bit more circular. “The clients wanted it a little more open, so we tweaked it a bit,” says Churchill.

Designing this more circular center-hall house presented some real challenges, particularly when it came to incorporating both solar and geothermal renewable energy systems. These systems drove radiant heat throughout the entire house and utilized filtered rainwater to supply gray-water plumbing, landscape irrigation, and a swimming pool complete with outdoor shower. “Installing all these systems into a new old Colonial house took some real doing,” confides Churchill. “Yet the hardest part was actually determining how to hide all the various gauges, controls, and sensors that came with each system.”

Special ductwork was custom designed to handle the extensive water and air disbursement and return lines. Vent grilles were reconfigured to handle the abundant volume of air to be conditioned and moved throughout. Even the kitchen’s exhaust and ventilation duct had to be custom built. “Because the entire structure was built out of structural insulated panels, we had to take great care to maintain a proper air balance in an airtight environment,” says Churchill. “Otherwise the custom fireplace and wood-burning stove would lead to inefficiencies.” Even the ventilation fans in the two and a half bathrooms were tied directly into the HVAC system to support equilibrium.

The client requested a geothermal heating and cooling system to help alleviate the long winter months. The enclosed system pumps fluid mixtures vertically downward through 1″ polyethylene (HDPE) pipes until the earth begins to heat the fluid, at which point it is returned to the geothermal unit in the house. The geothermal unit then acts as either furnace or air conditioner by using refrigerant and returned temperate water to heat or cool the air. The air is circulated through standard ductwork, with the results feeling the same as those from any standard forced-air system. But the cost of providing controlled climates can be as much as 50 percent lower than regular HVAC systems, with an average payback on newly installed systems within six to eight years. The real bonus is that once installed, it will run for decades on an infinitely sustainable power source, without degradation to the unit, property, or the environment.

To run the pumps on the geothermal unit—and to provide almost all of the electricity for the entire property—a vast solar array system was designed and installed on the front side of the main roof. “It will process up to 10 kilowatts of available power,” notes Churchill, “but the entire property averages only six to seven kilowatts of usage.” Despite this positive offset, the house is still plugged into the grid for two basic reasons. First, to take advantage of the net-metering program provided by the local electricity distributor. “If the system provides more energy than needed,” Churchill says, “then the owners are reimbursed with a credit toward next month’s usage, which occurs mostly during the summer’s high sun.” Second, the special ozone-purification filter on the rainwater swimming pool requires around-the-clock power, so the tie-in to the grid is essential for any solar power underage that may occur from time to time.

The natural rainwater pool is fed by an elaborate storm water collection system that also provides water to the outdoor shower. “There’s something very special and unique about swimming in collected rainwater,” observes Churchill. “You have this ethereal sensation of swimming in nature, without all the chlorine and chemicals.” Additionally, every gray-water fixture throughout the house (specifically, all the bathroom toilets) utilizes the same storm water, creating less of a draw on the immediate water table. Finally, the rest of the storm water is disbursed throughout the surrounding landscape via an extensive lawn watering system. Any remaining overage goes to a dry well and leaches back into the surrounding water table, naturally.

With the major systems configured, calibrated, and concealed, Churchill and his team turned toward the more traditional paths of environmental conscientiousness, such as reclaim and reuse. “We’ve got reclaimed brick for the flooring in the mudroom,” says Churchill. “And the exposed framing is all from local, hand-cut and -sawn hemlock and spruce.” Other areas of the house exhibit reuse as well, ranging from antique plumbing and hardware finds to reclaimed ipe wood—considered by professionals the gold standard for outdoor decking—from the Rockaway Boardwalk in Queens, New York, used for an enclosed farmer’s porch, which, according to Churchill, “should last another 100 years.”

Started in early 2012, construction was completed in only nine months—a testament to Churchill and his team’s determination—and has since been the object of much admiration. “The project has really attracted lots of recent attention,” claims Churchill. “We’ve been further approached by many prospective clients to reattempt the same type of project.”