When Jim Hansen decided to expand his 1901 home on Chicago’s North Shore, he couldn’t help exercising his package-designer’s brain as he planned the project. “There are cues—like color and typeface—that you expect to see when you’re used to a certain product,” Jim notes. “If a Coke can suddenly went from red and silver to yellow and purple, you’d walk right by it. Designers have to be very sensitive to the visual elements of a brand. I figured the same would apply here.”

In fact, Jim had been sensitive to his home’s “brand” from the moment he bought it. It was designed by the Harvard-trained architect Augustus Higginson for Edwin Fetcher, an Ohioan who became an executive with Winslow Brothers Company—the firm that created the famous ornamental ironwork for Louis Sullivan’s iconic Carson, Pirie, Scott and Company department store on Chicago’s State Street. This shingled, bungalow-like residence had been added to as early as 1906, but to this day retains its essential Arts & Crafts character. In reconfiguring several spaces and creating a large new family room, Jim not only immersed himself in the period’s aesthetics, but also strove to strike a balance between past and present.

“It’s very easy to get caught up in making a museum,” Jim says. “My concept: let a room or two speak to what the house was, and make the rest of the house appropriate to living today.” He worked with local architect John Fotsch. 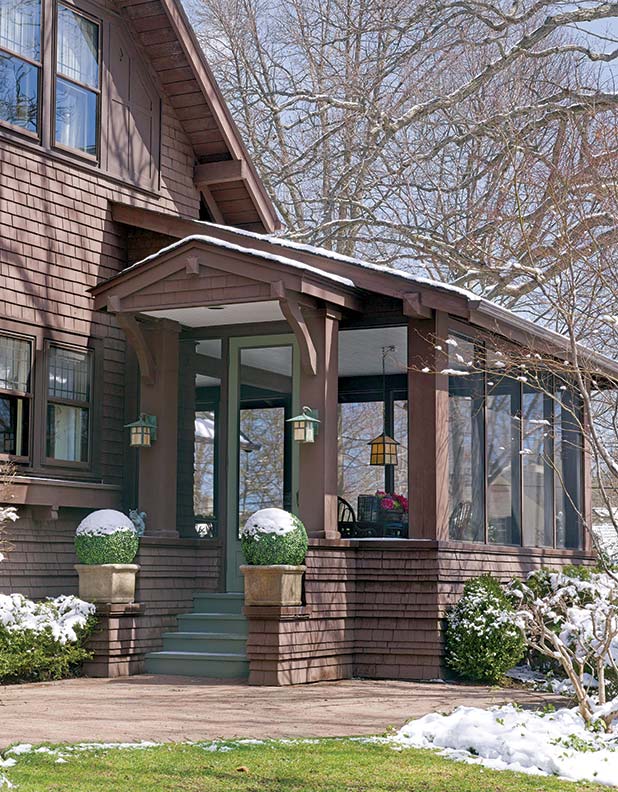 The “what was” and “what is” concept becomes clear in the juxtaposition of the original living room and the recently added family room. The former is a grand space—an 18′-high vaulted room anchored by a substantial brick fireplace; it served as Fetcher’s living room, dining room, and music room. The addition, which was built perpendicular to this space with a kitchen in between, echoes the area of the older room. But with a flat ceiling, a smaller hearth, and white-painted millwork, it makes no effort to mimic the construction, detailing, or even ambiance of the distinctive space Higginson designed in 1901.

A bachelor when he built the residence, Fetcher then married Margaret Root, daughter of architect John Wellborn Root. The couple raised five children in the house and lived here until 1954. Jim, who reared his own blended family in the home, has been as assiduous in exploring Fetcher family history as he has in maintaining and mediating the building. The Fetchers, he learned, were passionate about education and music; they put on plays and recitals in the main room, and hosted such visitors as Margaret’s aunt, Harriet Monroe (founder of Poetry magazine), and the Nobel Prize-winning poet William Butler Yeats.

Through a local resident who had known the family, Jim made contact with Fetcher’s son John, a retired surgeon living in St. Paul, Minnesota. “He was just thrilled that someone was living in his old house, and he came down to visit,” says Jim. “Once he started talking, he was a spigot!” In one conversation, Fetcher remarked on the running pine-tree stencil that decorates the ceiling area between beams in the living room. “John Fetcher said that his uncle, John Root Jr., had done it,” Jim explains, “and his uncle, a practical joker, told the family that he’d signed his work. But they couldn’t find the signature. So I’m looking at the ceiling, and I say to John, ‘Is it possible he signed it everywhere, with the root of the tree?’ And this look of ‘Duh!’ came over his face.”

An avid researcher, Jim turned to the estimable Burnham Ryerson Library at the Art Institute of Chicago to further explore the history of the house. Although it is a modest property, built simply with board-and-batten interior walls rather than plaster, Fetcher’s home earned press coverage early on, with articles in Architectural Record and Inland Architect. In 1905, The House Beautiful said of the home: “It is first of all livable, and being livable, it is simple, sincere, and unpretentious.”

As the family grew, the relatively small house did, too. A two-story, two-bedroom addition was added, and a sleeping porch was roofed and enclosed to become another bedroom. Little was done to the house after the Fetchers departed in the 1950s, except for a questionable enhancement to the exterior. Jim explains, “An artist lived here, and she had painted all the trim in neon orange. She thought that made a statement, but it was a real turnoff.”

Inside, Jim addressed not-unexpected mechanical issues, updated the kitchen and bathrooms, and installed built-ins that evoke the period of the house. He also outfitted the original living space with a seemingly incongruous lighting system: 250-watt up-lights affixed to plain, industrial arms that jut out from the walls. “When I bought the house, there were six hanging fixtures—not original ones—fitted with 75-watt bulbs,” he says. “They lit the room, but not the ceiling.” Jim’s solution is simple and effective. The silver and sienna tones of the ceiling are beautifully lit, and attention goes to period fixtures and lamps. The brand endures.

Watch the Video: What is Arts & Crafts?