Typical retirement for most people includes moving to destinations further south where the weather is warmer and more inviting. Yet when it came time for Sandra Page and Pete Magas to follow suit, they decided on the reverse: relocating from Texas to the Upper Peninsula of Michigan.

“Texas was too hot, and the politics seemed bad,” says Sandra, who spent 20 years in the Dallas/Ft. Worth area managing family-owned bookstores. “Pete had spent a lot of his younger years around Marquette, and had built up a wonderful circle of friends over time,” she continues, “so it was easier to move because of the social connections.”

For Pete, the desire to return to his college stomping grounds was rooted more in the territory’s wilderness. “I went to school at Northern Michigan University back in the 1960s, and fell in love with the wild beauty surrounding Lake Superior,” he recalls. “The opportunity to get back to some real grouse hunting and steelhead fishing was too hard to resist.” 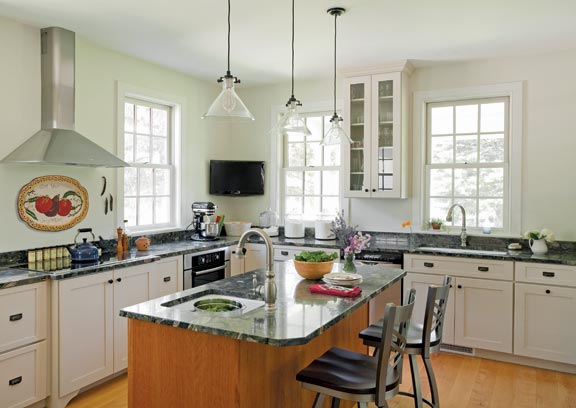 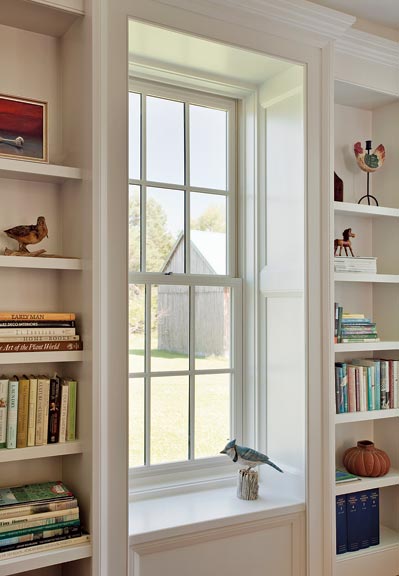 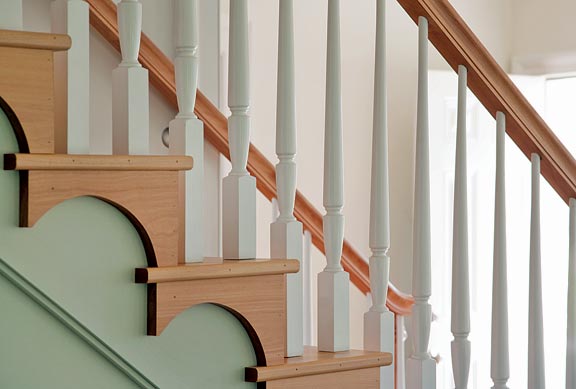 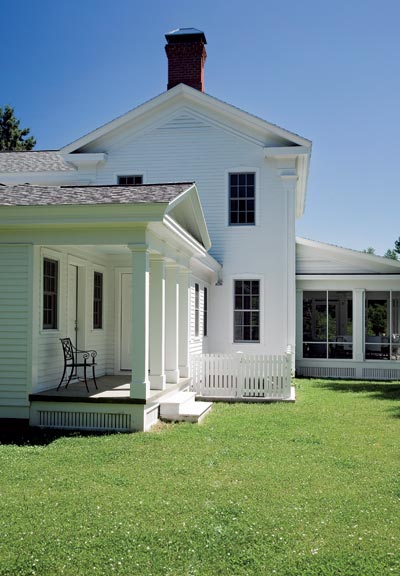 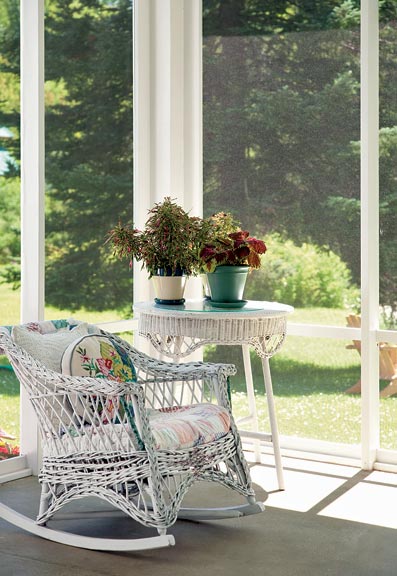 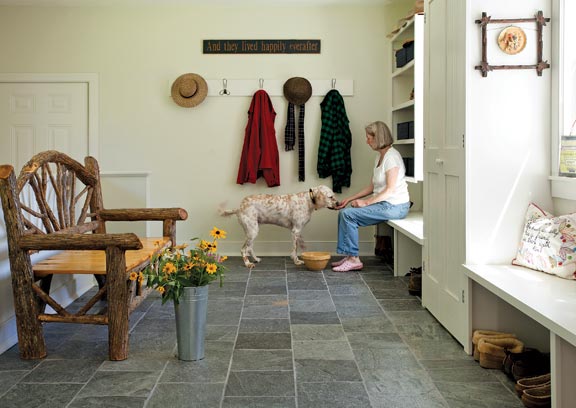 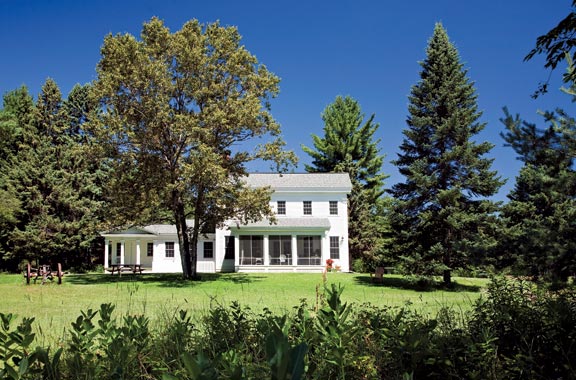 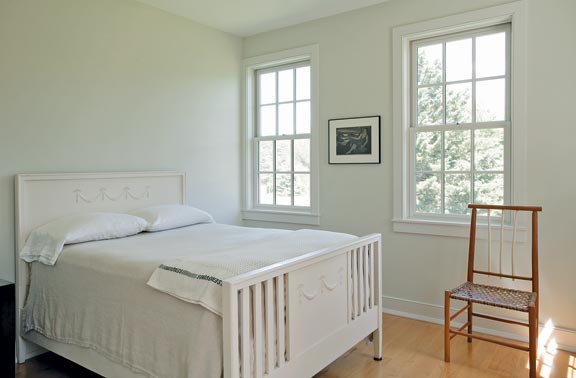 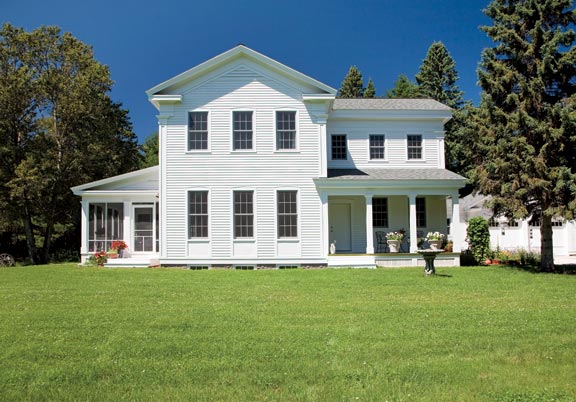 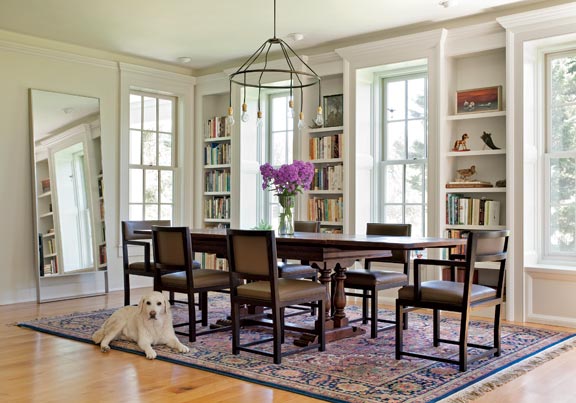 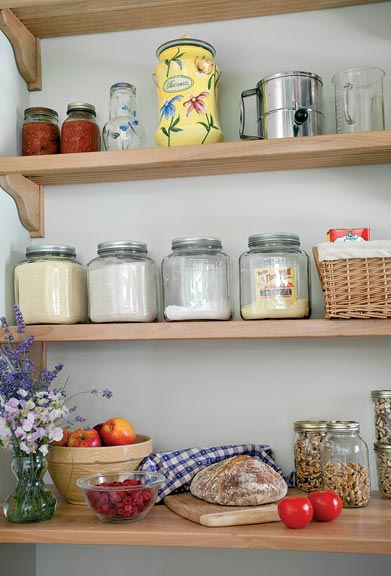 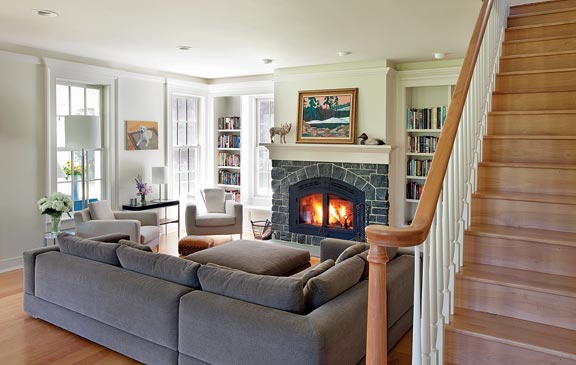 While visiting family on vacation, they happened upon an old farmhouse for sale a few five miles outside of downtown, in a hamlet known as Harvey. Sitting on a knoll amidst seven acres of mature trees, it appeared to be the perfect spot to consolidate their lives. “It was this charming owner-built farmhouse from the 1920s,” remembers Sandra, “complete with a beautiful 100-year-old barn with a metal roof.” Then the bad news: “Unfortunately,” she confesses, “it did have some problems, too.”

Sandra had just finished reading Creating a New Old House by Russell Versaci. “Inside the book I saw a beautifully completed Greek Revival by architect Marc Rueter,” she says. “I called him, and we spoke briefly over the phone about a possible project,” she explains. “He made a trip up to see the site.”

Travel to the Upper Peninsula—referred to by most Michiganders as “the U.P.”—is not taken lightly. Because of the size and depth of Lake Superior (the largest and deepest of the Great Lakes) defining the northern border, locals suffer through more snow in a month than Buffalo, New York, sees in a winter season. Self-proclaimed “more practical” inhabitants of lower Michigan compare the U.P. to the boundary-water territory of northern Minnesota: a place so wild that only wolves or moose can survive.

Undeterred by logistics, Rueter—a lover of all things Greek Revival—left his Ann Arbor headquarters to visit Sandra and Pete in Marquette, to see if he could help. “We quickly determined that it was not possible to renovate,” Rueter explains, “as the original house had been added on to at least two or three times.” Conceding to a rebuild, the couple was now tasked with finding an adequate location on the property to do so. “Reshaping the land gets expensive quickly,” says Rueter, “so I was happy when the owners selected the old house site for their new home.”

His other reasons for agreement were easily recognizable: “It was on a slight rise close to the road with good drainage, nestled nicely between some preexisting mature trees, looking east toward the old apple orchard,” he adds. “Only about 50 yards below the house was the barn, and just beyond that was a nice trout creek.”

Geoff Harker—an excellent detailer in Marc’s office at the time—worked up some preliminary designs, including a nice screened porch area to keep out the U.P.’s infamous black flies. “Our main priority was providing enough space for our extended family to overlap their visits and be comfortable,” says Sandra, “but still be small enough for us to manage on our own.” For Pete, the overall goal was a little more self-evident:
“Well, I’m Greek,” he brags, “so it wasn’t too hard to figure out what style of house to build!” After a great laugh, he thoughtfully comments, “I’m really delighted with the Greek Revival—it all works very well, aesthetically.”

In an effort to scale down the final plans, Sandra and Pete made a trip to Ann Arbor to visit Marc at his office. “After that meeting, Sandra and Pete always made themselves available for over-the-phone discussions about finer details,” recalls Rueter.

It was around this time that builder Craig Cox entered the equation. A longtime friend of Pete’s, they had done some work together back in the days when everyone learned how to “make do’” living in rural country by working at whatever you could find. “I did some remodeling for Craig a long time ago,” remembers Pete. “He was the best boss—always led by example, and the project wasn’t done until absolutely perfect.”

Apparently not much had changed in the more than 30 years since. Rueter explains, “When we all first met at the site, Craig already understood the overall intent of the project and made some thoughtful suggestions.” Craig explains, “Greek Revivals create an attractive opportunity from a building perspective because of all the detail and built-ins, and my job was to provide Pete and Sandra with what Marc had designed.”

To help facilitate creating and assembling all the intricate details, Craig brought on local craftsman Jim Hendrickson, a fourth-generation carpenter whose company’s employees include his dad and his younger brother. “Jim and his crew are excellent craftsmen. They would call me to go over all the finer details to ensure they got it right,” says Rueter. In 1911, Jim’s great-grandfather came over from Sweden and settled in the area as a carpenter. For almost a century, the company—aptly named American Classic—has survived by keeping things low-key. “We’re just a small company doing one to two custom homes a year, filling in the schedule with small repairs and occasional garages or additions,” says Jim.

Armed with tried-and-true handed-down principles, Jim started the nine-month building process. Initially, the effort focused on creating a weathertight envelope before winter, including all the framing, roofing, porches, exterior trim, and rough mechanicals. By December, the crew moved inside, where they began work on finishing the custom stairs, kitchen, wall-to-wall built-ins, fireplace surrounds, and gun cabinets in Pete’s study. Beech wood flooring was locally harvested, then steamed before installation to produce a ruddy red hue that compares nicely to more expensive cherry. Through it all, Jim was amazed at the accuracy of Marc’s plans. “We worked straight from the drawings, and all the trim came out within 1/16 of an inch,” he says.

In April 2009, Sandra and Pete were finally ready to take the keys from Craig. “It’s funny how the momentum in life was interrupted by our next move,” says Sandra, “but I can honestly say I’m as happy as I’ve ever been—as long as I can remember.” Pete chimes in, “Of all the places we have lived or wanted to live, this is by far the best place.”

All the other contributors shared equal perspectives of satisfaction. “Sandra had requested that a lot of detail be carried throughout the project,” remembers Rueter, “and everyone involved really enjoyed working together to accomplish that vision.” Craig seconds Marc’s lead: “Bringing together good people who took pride in their work and were seriously concerned for the outcome of the project was the most fun for me.” Jim finalizes the theme: “For us, making clients happy is the priority, and when we finished this project, Sandra and Pete were very happy.”

After spending the summer getting organized in their new digs, the couple prepared for the first long winter in their new home—easier to do with a five-star energy rating, thanks to Craig’s focus of making the house as energy efficient as possible. “I really love the wintertime with all the snow,” says Sandra. “I got to try out my new snowshoes from Christmas.” Pete describes how he cut in a few miles of footpaths through the property for family and neighbors to use. “Winter is really magical around here.”