When he was a boy growing up in Pasadena, California, Dyke Messler had lunch at his grandparents’ house on Sundays. “I spent Christmas and birthdays there, too,” he says.

Messler’s grandmother’s name was Gamble. Yes: His great-grandparents were David and Mary Gamble, who had commissioned the architects Greene & Greene to design their winter residence, which was built in 1908. The Gamble House is a masterpiece of Arts & Crafts residential architecture, one of the houses by Greene & Greene referred to as “ultimate bungalows.”

But for Messler, the cozy house was just “my grands’. They let us run and explore, nothing was off-limits to us kids.” He says the house, with its exquisite exposed joinery and craftsmanship, and its Japanese-inspired design, became a discovery experience for him.

Following the death of their parents in 1966, Messler’s mother and her five siblings gave the house jointly to the City of Pasadena and the University of Southern California School of Architecture. Messler went East to attend college, then moved to rural Vermont, where he bought and restored a ca. 1820 Cape. Finding Vermont too isolated, he then moved to coastal Maine, where he bought and restored a series of old houses.

When Messler acquired a spectacular piece of land halfway up a mountain overlooking Penobscot Bay, he decided to build a home that would pay homage to his grandparents’ house. Working with Belfast, Maine, architect Dominic Paul Mercadante, Dyke Messler sought to create a 21st-century, East Coast version of the designs of Charles and Henry Greene.

“Dominic and I have worked together for 25 years,” Messler says. “This is our sixth project. It had to be interpetive; the Greenes’ houses were created for the Mediterranean climate of Southern California, and the interiors tend to be dark. I took the liberty of using lighter woods, and we shortened the rafter tails in eave overhangs to allow more sunlight to enter. The roof line is steeper to shed snow.” Messler adds that, while Greene & Greene sheathed their houses in redwood shakes, he chose red cedar, stained lichen green to approximate the Gamble House color.

He and Mercadante started the project in 2008—with a 2,000-square-foot guest house. “We wanted to get a sense of the joinery details, and the cost,” Messler explains. “Fortunately, Maine is loaded with very talented builders, so we worked with people who knew woodwork—but who were happy to be pushed to this high level of craftsmanship. Greene & Greene’s work is nothing short of brilliant. In the joinery, for example, surfaces are rounded and polished, joints are pillowed and exposed.”

By 2010, Messler and Mercadante could move on to the 6,000-square-foot main house, which was completed 26 months later. “The Gamble House, which is about one-third larger, was completed in nine months at a cost of about $75,000, including the furnishings,” Messler report. “This one cost a bit more!”

Renowned glass artist John Hamm of Whittier, California, interpreted the design of Gamble House’s front doors for Maine, selecting motifs of a pine tree, clouds, and the ocean. The front hall is based on that of the Culbertson House, another of Greene & Greene’s Pasadena houses. Dominic Mercadante designed a staircase that incorporates the favored cloudlift motif, also found on the windows. Charles Greene collected tsuba, Japanese sword guards; they became the inspiration for escutcheons made for all the doors and for the shape of the mahogany dining table.

A patio, multi-level gardens, an infinity-edge pool, a waterfall, a stone barbecue area, and a pond surround the house. Like its West Coast inspirations, Overlook appears to be rooted in the ground, rather than plunked down upon it. “Interpreting the Greene’s work is tricky business,” Messler admits. “More than one new version has failed because it was simply overdone. Ted Bosley, executive director of the Gamble House, was full of praise for this house. That, to me, is the supreme compliment!” 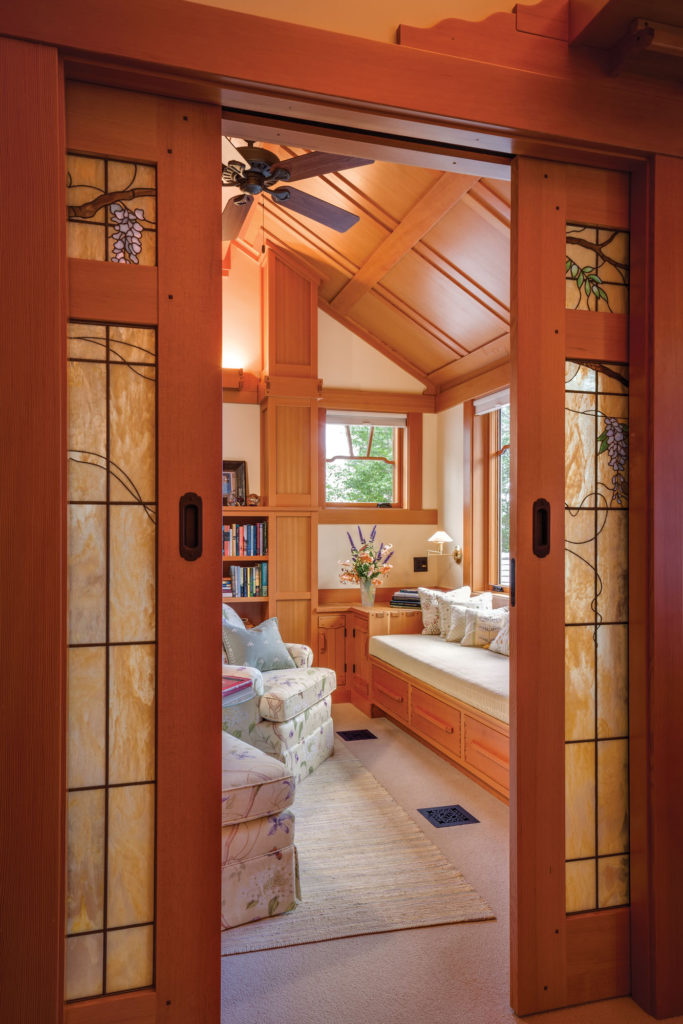 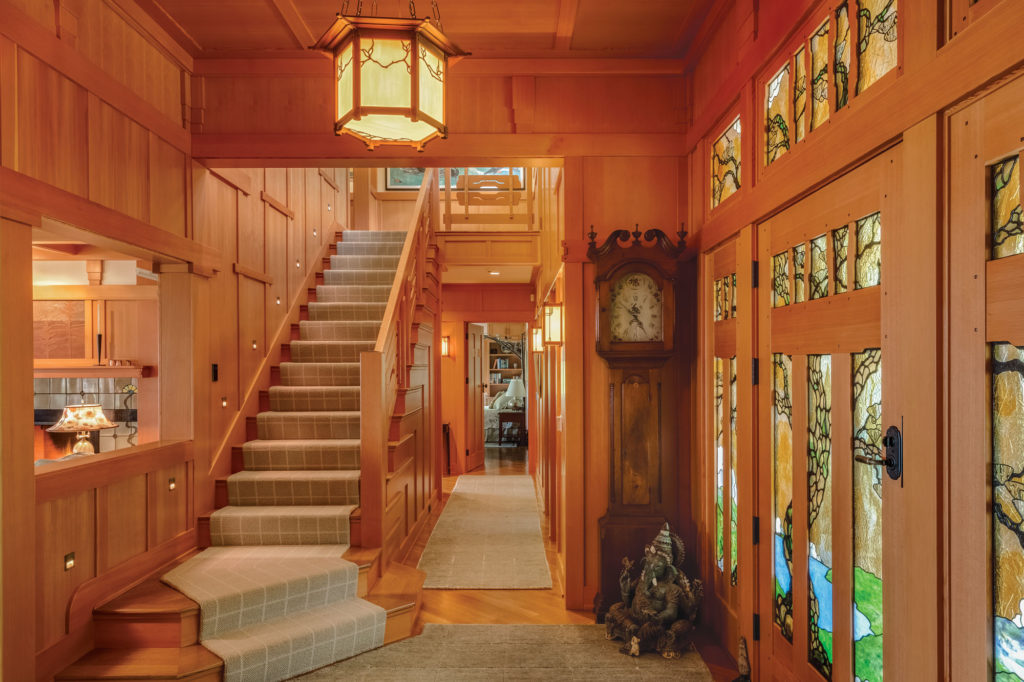 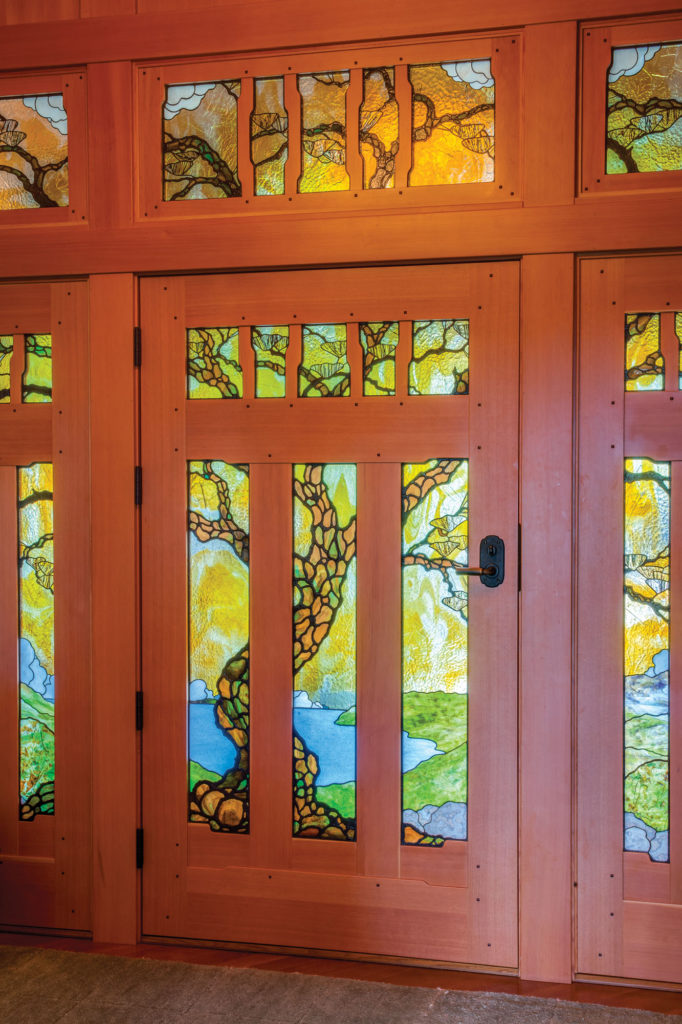 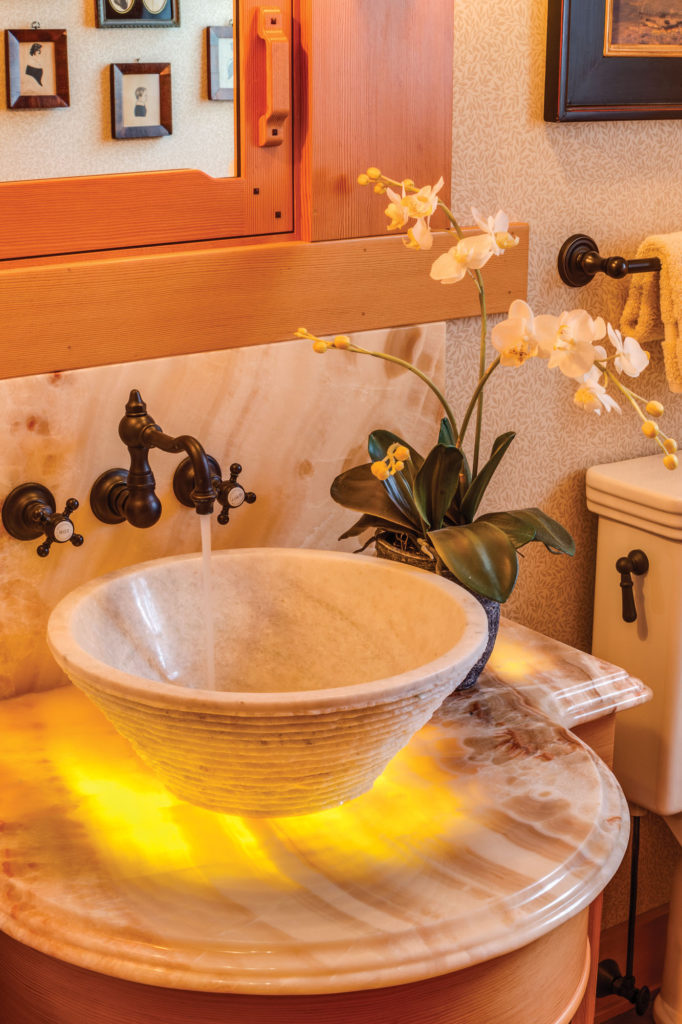 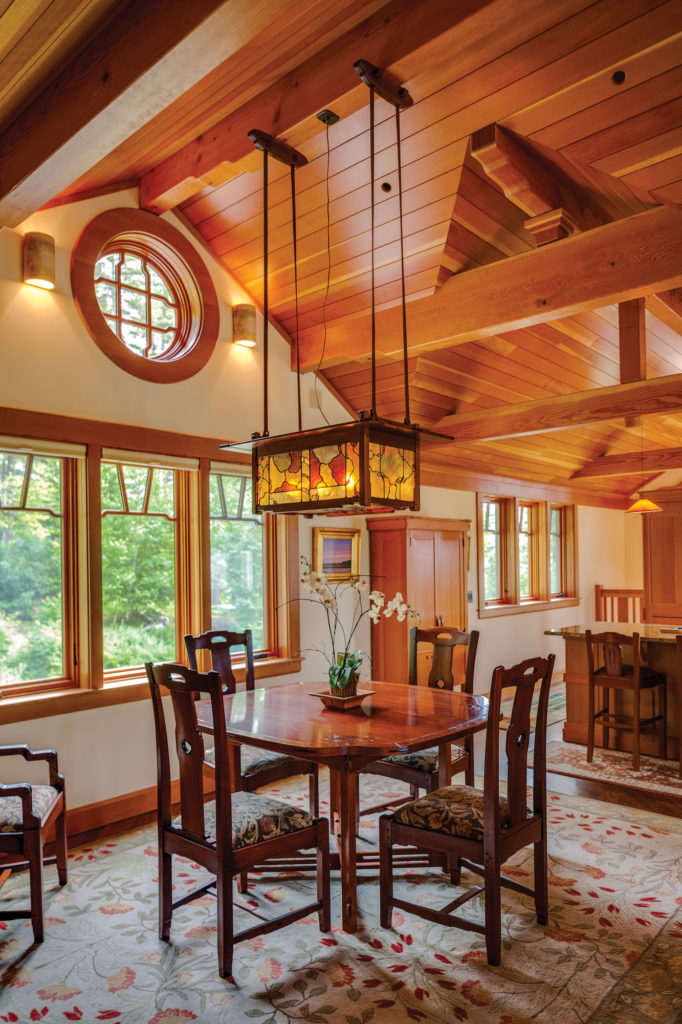 The Art & Craft of Stone

In building his homage to Greene & Greene, Dyke Messler used nine types of wood, including maple for the kitchen cabinets and flooring. This house is about stone craft, too. The array—23 different varieties—boggles the mind.

Converting a Stone Barn into a House