Nestled in the bucolic countryside of Chester Springs sits a fieldstone house that appears to have been resting in that spot for centuries. Sturdy and comfortable in its woodland surroundings, the house stands as testimony to the clever and creative genius of its architect, Peter Zimmerman of Peter Zimmerman Architects.

“One day I noticed a piece of property for sale. The home was not much, a 1960s contemporary in pretty bad shape, but the land it sat on was private and beautiful,” says Zimmerman. He immediately called his clients, a retired couple who had been looking for a site on which to build. The couple had called Zimmerman after seeing a home that he had designed published in New Old House in 2006. They loved the layout of that particular project—a small single-story wood farmhouse—but they wanted a different vernacular: a Pennsylvania Dutch fieldstone structure. 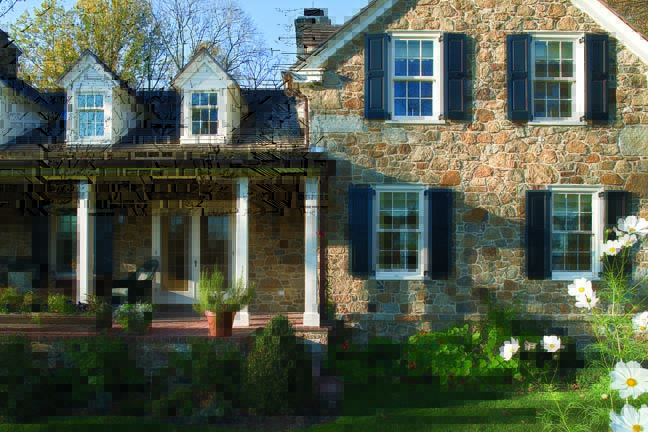 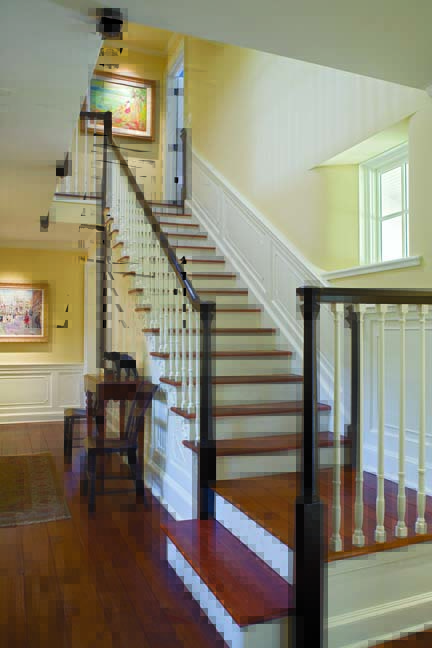 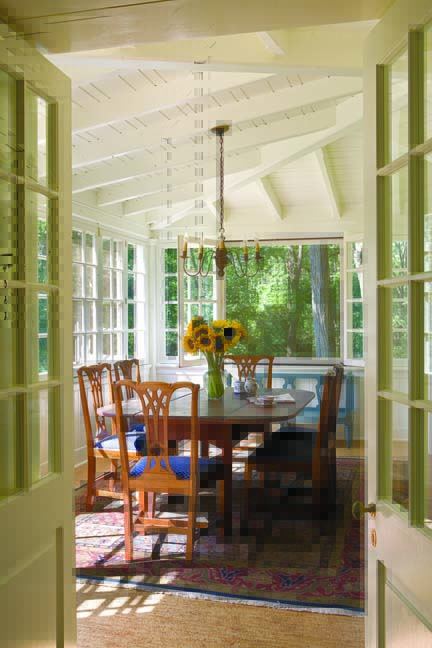 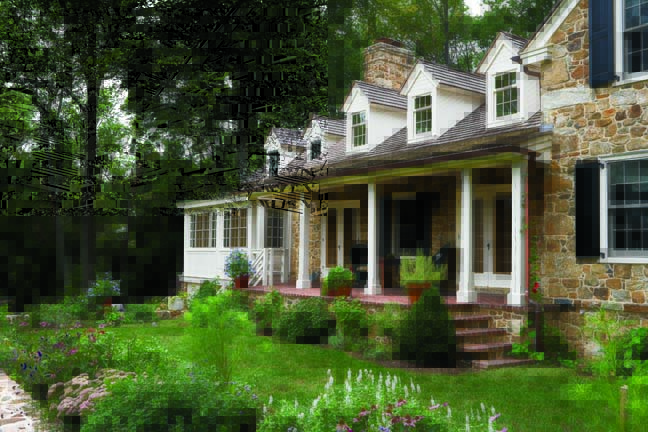 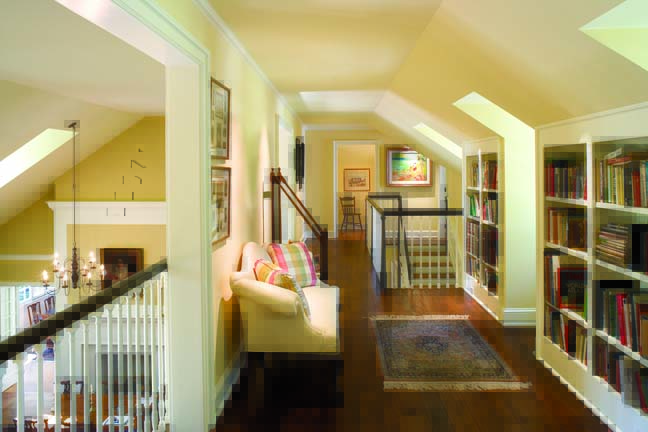 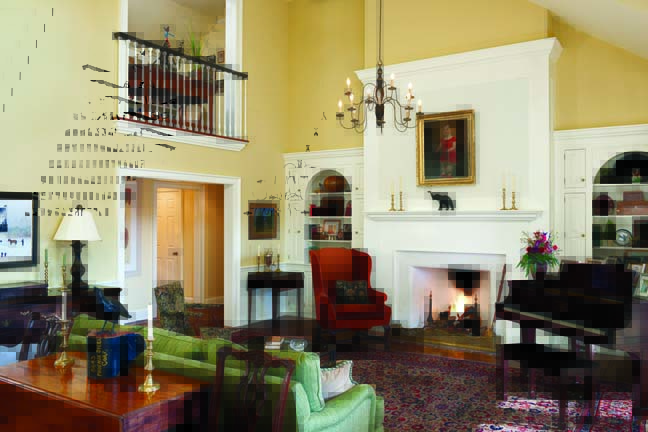 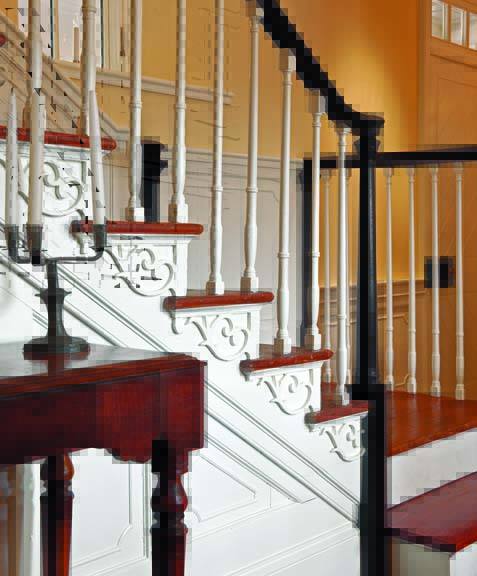 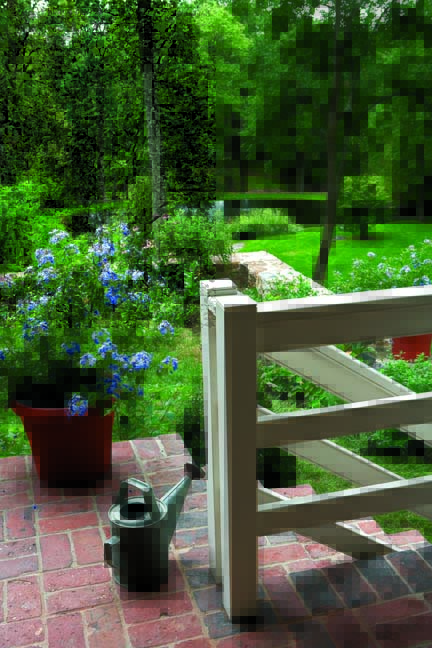 The challenge for Zimmerman was to create an authentic design that had most of its living space on the first floor. “I didn’t want the house to look too long or too low,” he explains. “That layout would not fit into a traditional design.” Another challenge Zimmerman and project architect William H. Johnson III faced was working within the existing house’s footprint; the zoning codes in the area did not allow for the house to be sited differently. To meet these goals, the team created a design where 70 percent of the living space was located on the first floor.

“We were able to manipulate the volume so that it didn’t look like a single-story house,” he states. The dormered stone structure is composed of a story and a half with two wings—one wing is a story-and-a-half gabled stone structure, and the other is a story-and-a-half clapboard structure. He leveled the existing structure to the first-floor plate and slightly modified the foundation, which is on a steep slope, to keep the footprint within the zoning boundaries.

To create a suspension of disbelief as to the age of the house, Zimmerman weaved a plausible story of how the house may have evolved over time. He layered details within the volume of the house, such as a change in materials from stone to wood. This alteration makes the clapboard wing appear as if it had been added by a later generation. He also juxtaposed different time periods, adding to the illusion of the passage of time. The French doors and a sun porch also would have been “later” additions to the home. One can imagine that these architectural elements were incorporated to update the “antique” house to reflect twentieth-century fashions.

“There is a strong German influence in the area’s building traditions,” says Zimmerman, who clearly borrowed from the region’s eighteenth-century vernacular stone houses. Germans often built in stone, as they had done in their native land. Immigrant farmers would plow the rocky soil and remove the stones from the field to use as building materials, along with old-growth timbers. “Authentic stone veneers are about 8½” thick,” explains Zimmerman, who used salvaged stone from a local historical building being demolished. “The thickness of the walls creates deeper windowsills and door openings.” Many of the window jambs are splayed to admit additional natural light. “Antique brick was used sparingly in limited and controlled areas of the house because in the past, a stonemason would have to be hired to lay the brick,” continues Zimmerman.

Zimmerman, who is an advocate for using salvaged and reclaimed materials, did not stop at the home’s façade when incorporating recycled items into the project. “I have to applaud the homeowners, who found many of the salvaged items we used throughout the house,” says Zimmerman, referring in particular to the salvaged interior staircase. Zimmerman designed new trim detailing and got permission from the zoning board to use the original 34″ rail rather than replacing it with a standard 36″ rail, which would comply with today’s standard building codes.

“Salvaging old materials or preserving old structures doesn’t get enough credit in the green movement,” states Zimmerman. He believes that more often than not, contemporary structures that are LEED certified won’t last more than 25 years, whereas homes built using traditional materials and methods will last 100 years plus. “This house has locally milled lumber, resawn salvaged heart pine, and antique brick terraces, and it was even built on an existing foundation—you need to look at the total impact on the environment when discussing sustainability,” says Zimmerman.

Another important design factor for the homeowners was the relationship between the inside and the outside. The couple really wanted the house to be light and have a sense of openness to the surrounding woodland landscape. Zimmerman also wanted to create a nice visual connection between the front and back of the house. “There is a front hall through which you enter into the great room—this room has views to the south,” explains Zimmerman. Open porches flank both the front and back of the house, offering ample spaces to enjoy outdoor living. The windows in the dining porch fold back on themselves with sash hinges so the whole room can seemingly open up to offer alfresco dining.

The public interior spaces also open onto each other. The main structure is essentially one great room where the family gathers for relaxing and formal dinners. A series of balconies look from a second-story gallery onto that room, and this second-floor gallery has shelves tucked into knee walls for the couple’s extensive book collection. “No space was wasted in the house,” says Zimmerman. One wing is reserved for the kitchen, family room, dining room, laundry room, and mudroom, while the master bedroom, dressing room, master bath, and study are tucked into the other wing. Zimmerman added three bedrooms, along with two full baths and an office, to the upstairs. The dormered six-over-six wood windows allow the spaces to flood with natural light. The home is full of light, open, and airy—perfect for twenty-first-century living wrapped into the building traditions of centuries past.