All photos by Caryn B. Davis

On a quiet, tree-lined section of Main Street in the historic town of Suffield, Connecticut, sits the Phelps–Hatheway House. The five-bay central block (early 1760s), with a large center chimney, originally had a gable roof. It is flanked by a Federal period three-bay section on the north that was completed in 1795. There is a one-and-a-half storey ell on the south side, which is the first structure, dating back to the mid 1700s. Each of the three sections now has a gambrel (broken-pitch) roof and is sheathed in wood clapboards.

The Georgian-period center block is beautifully if austerely finished inside with high-quality woodwork. The formal entry is at the center of the block, sheltered by the Federal-period Doric portico. Oliver Phelps, who purchased the house from the original owner’s son, Shem Burbank, in 1788, undertook the addition and high-style improvements. Phelps paid Asabel King, one of Suffield’s most active woodworkers, to add modish details to the exterior, including quoins at the corners and lintels above the windows.

The Federal wallpapers in Phelps’s addition are original, made in the Réveillon factory in France in the early 1790s. Connecticut Landmarks, the organization charged with overseeing this historic property, says that the Phelps–Hatheway house has the largest assemblage of 18th-century French wallpaper in this country. All of the English carpets, however, are period reproductions from J.R. Burrows & Co., who commissioned them from the same firm Phelps used when they were originally installed in 1795. Many important early Connecticut River Valley furnishings remain in the house, from chests to tall-case clocks.

Phelps was a principal in the Phelps and Gorham Purchase of six million acres in upstate New York, making him one of the nation’s largest landowners and, for a time, a wealthy man. He lived in this house until 1802, when he lost his fortune and moved to Canandaigua. The state held the property until Asahel Hatheway bought it in the early 1800s. The Hatheways remained in the house through 1914.

Surrounded by restored formal gardens, the house is a favorite summer stop for history-minded tourists. These photos, however, provide a more intimate view of how the house would have appeared at Christmastime when the original occupants were in residence. They were taken during the Annual Holiday Weekend, one of Connecticut Landmarks’ biggest fundraisers.

Horticulturist, designer, and blogger Julie Harrison (from Julie the Garden Fairy) created the holiday decorations based on period conventions and her own imagination. The Suffield resident spent countless hours wandering the house and the attic, gathering a feel for the history and folks who lived here.

“Some people might feel a little spooked to be in a huge old house with so much history; I felt moved by its stories and was thrilled to bring it alive again for the Christmas season,” Harrison says. She was selected because of her talent, but also because she has a great feel for the town of Suffield, notes site administrator Lynn Mervosh.

Harrison used lots of natural materials, including those from her own garden, but also indigenous plants—and tobacco, which has long been part of Suffield’s landscape and economy, as the town was a major grower and exporter of tobacco leaves and cigar wrappers. 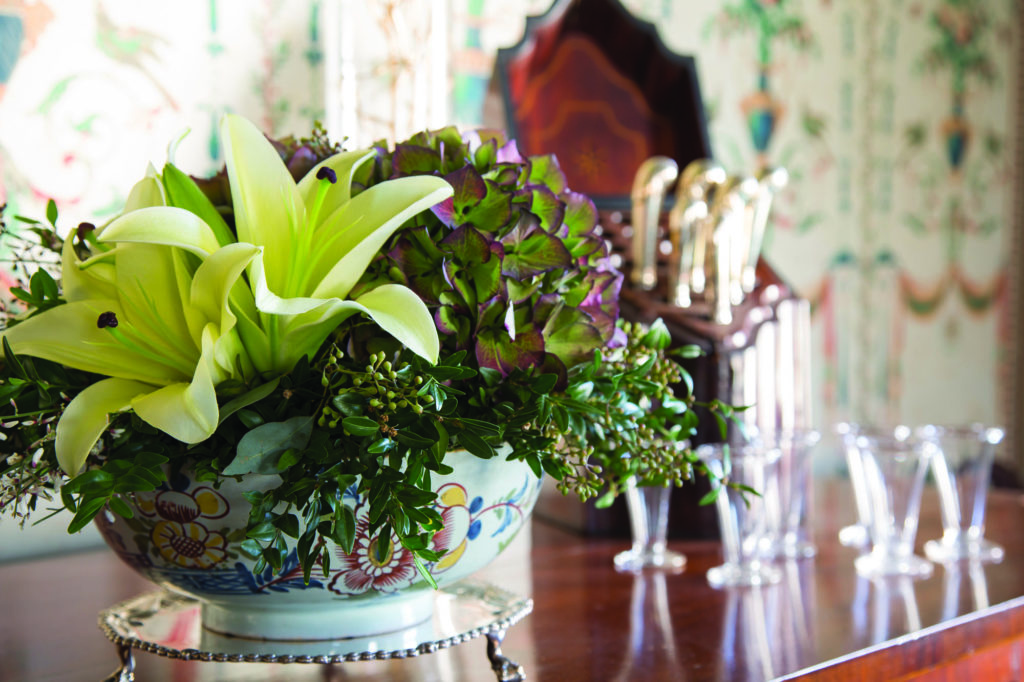 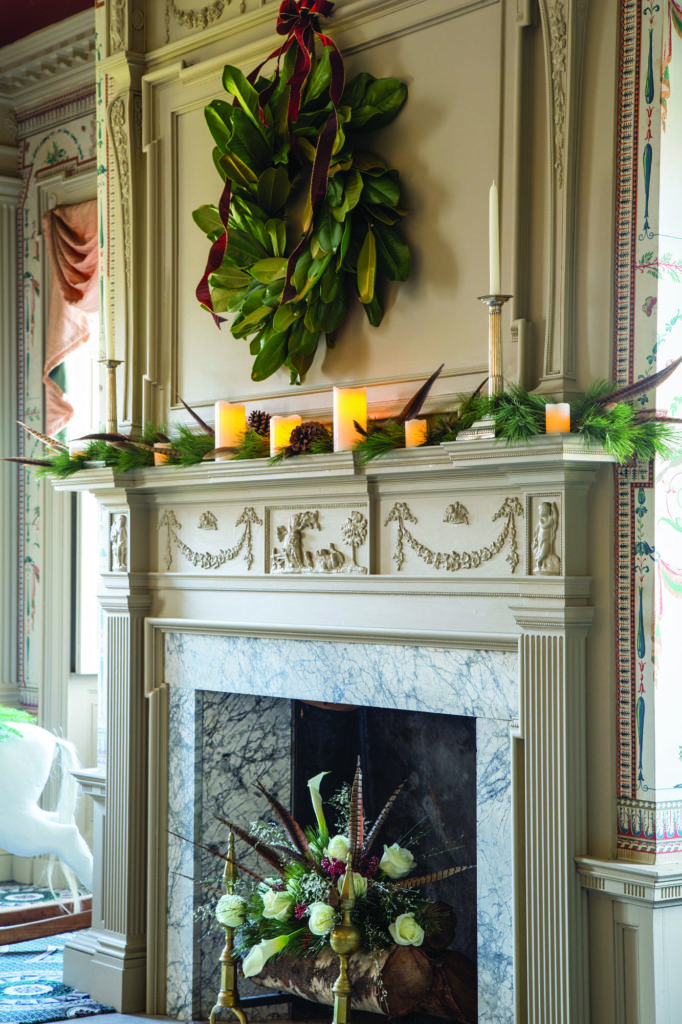 “The decorating in the older, Burbank side of the house reflects the feeling of colonial Connecticut. Dried fruit, tobacco leaves, evergreen tips from native trees are all realistic possibilities for the period. The showier Phelps side reflects the personality of Mr. Phelps . . . why not have a Christmas tree decorated all in fresh white flowers, even for just a weekend party?” Julie Harrison asks.

Holiday Tradition
A few Phelps–Hatheway House photos appear in a new book by Caryn Davis. It chronicles winter holiday celebrations in Connecticut, from the lights on a village green to shops on main street, from town and church festivals to intimate moments. Additional photos were taken in Connecticut house museums, inns, taverns, and private homes Colonial through Victorian. This is a celebration of those New England traditions that spread throughout the country—traditions that bring us to “a special intersection of time and space.” Essays by Eric D. Lehman form a narrative both historical and contemporary. The book is a nostalgic reminder, a lovely gift, and an inspiration for your own tree trimming or table setting at home. For visitors, a calendar of events with dates and locations is included at the back of the book.