Splendor can sing an intense, elaborate song, or enthrall with a modest melody. The Patterson Carr House, one of the historically significant mansions in Atlanta, doesn’t make a loud entrance; its charm, integrity, and quiet grandeur give it a commanding presence as engaging as it was when the house was designed in 1939.

Until several years ago, the Colonial Revival home had had just two owners: the Patterson family, who hired the renowned classicist architect Philip Trammell Shutze to build it, and the Carrs, whose matriarch, Anne Carr, famously said, “If we don’t care for our heritage, then who will?”

When the Carr family sold the house, there was naturally some nervousness about what would happen to the property, which is set in a quiet area of homes with lush, sweeping lawns and tended gardens.

The new owners, a family of six, realized the house needed work. Right in tune with the spirit of the original house and its first owners, architect Yong Pak and interior designer Tammy Connor, both classicists in their professions, entered the picture. Today, after a major uplift and subtle changes to accommodate a 21st-century family, the house stands in grand repose, still a beautiful reflection of the original.

Yong Pak, founder of the architectural firm Pak Heydt & Associates in Atlanta, had been invited to see the house when it was still in the Carr family. Pak was struck by it. “It was not a fancy house, but a very personal home.” He recalls approaching the property, by way of a drive that, lined with Kwansan cherry trees, leads to the soft-yellow clapboard house. “It was idyllic English but ‘New England-y’, too,” he says.

Coincidentally, years later, an acquaintance of Pak’s bought the house. “It was very sought-after,” says Pak, who leads the architectural firm with Charles Heydt. Pak knew it was critical to retain the mansion’s intimacy and very special old bones. “Historic houses have to be used,” Pak says. “But how do you turn an older house toward the needs of today’s lifestyle?” 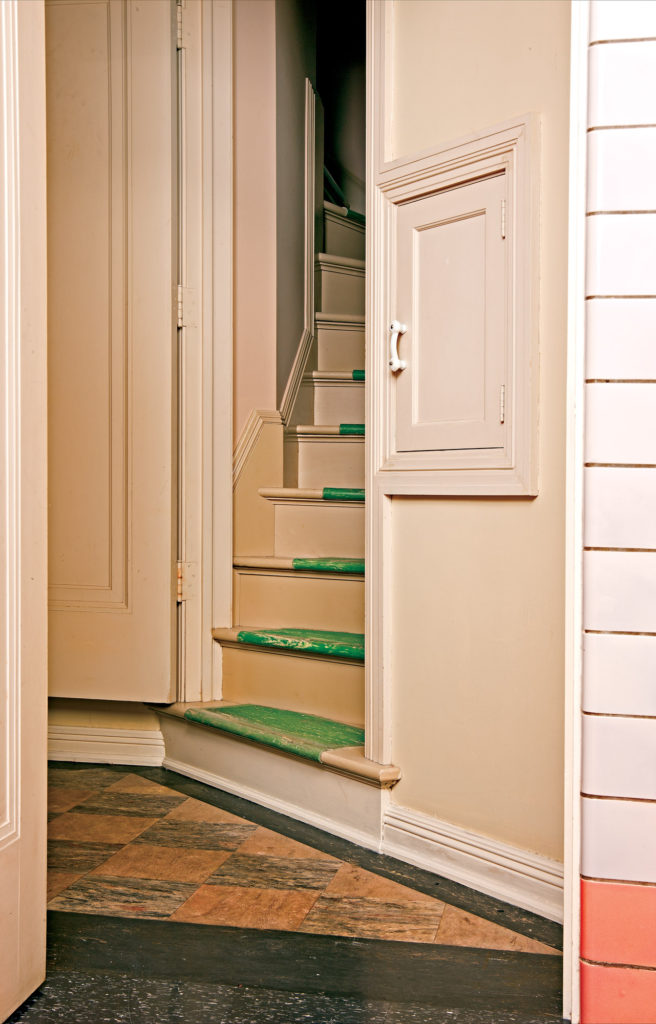 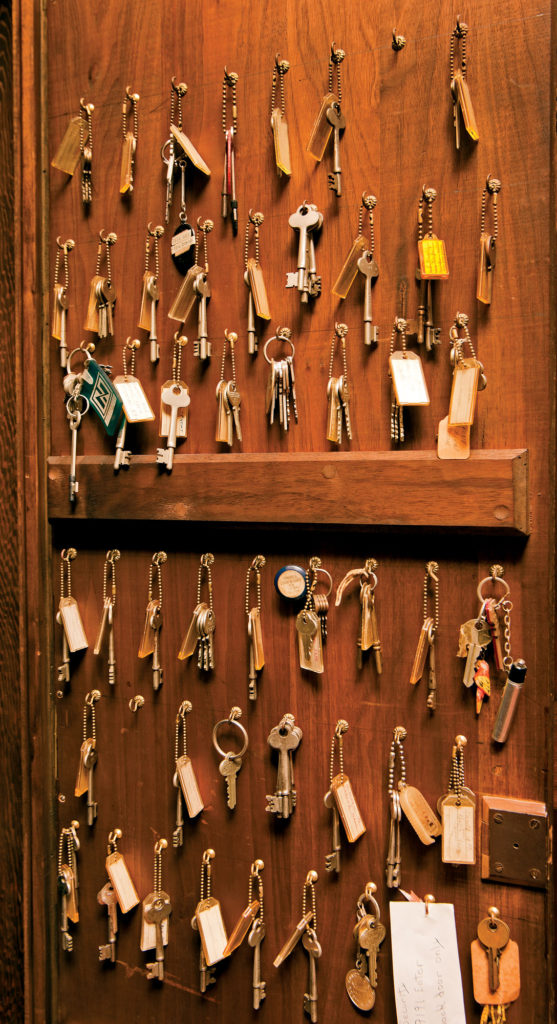 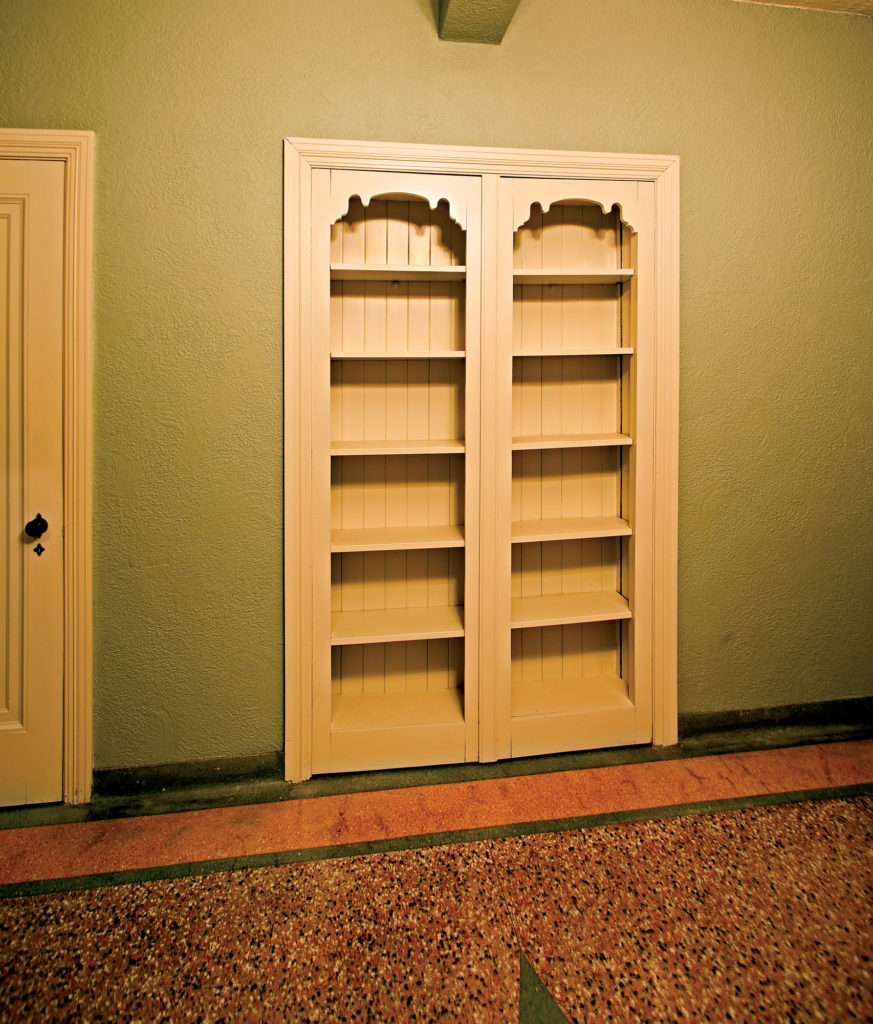 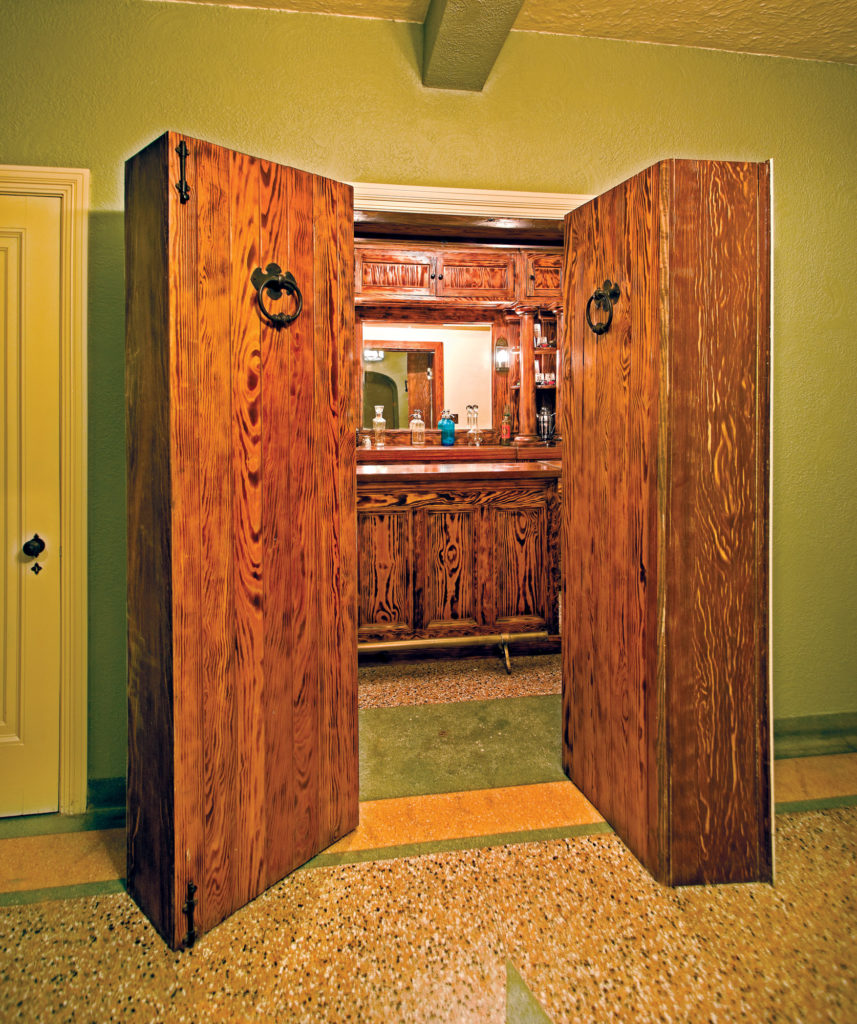 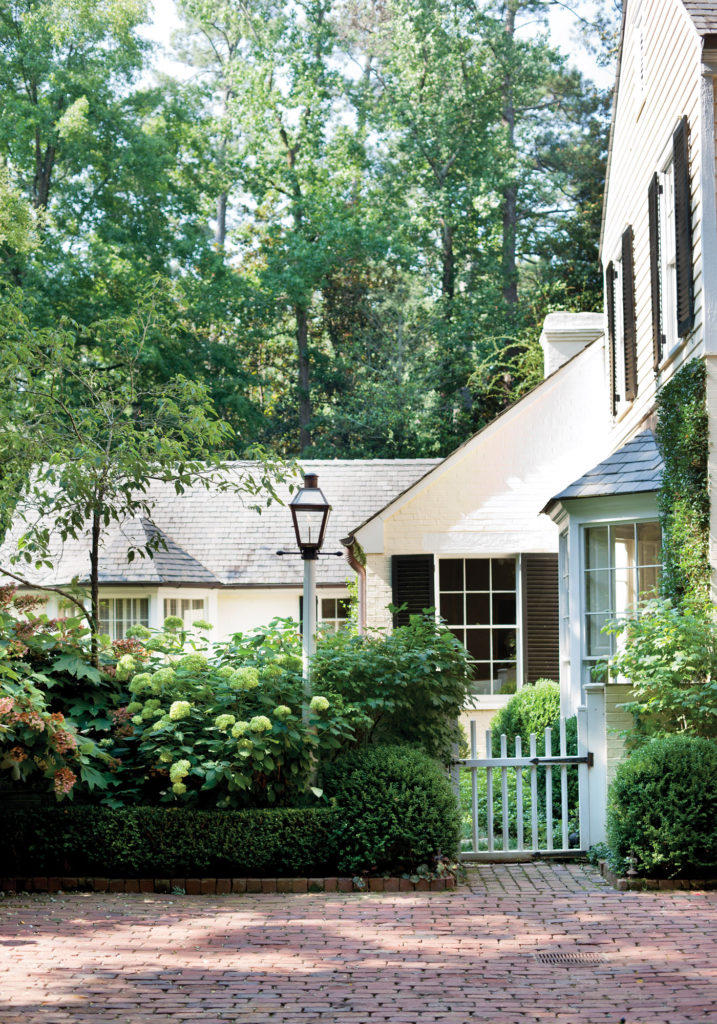 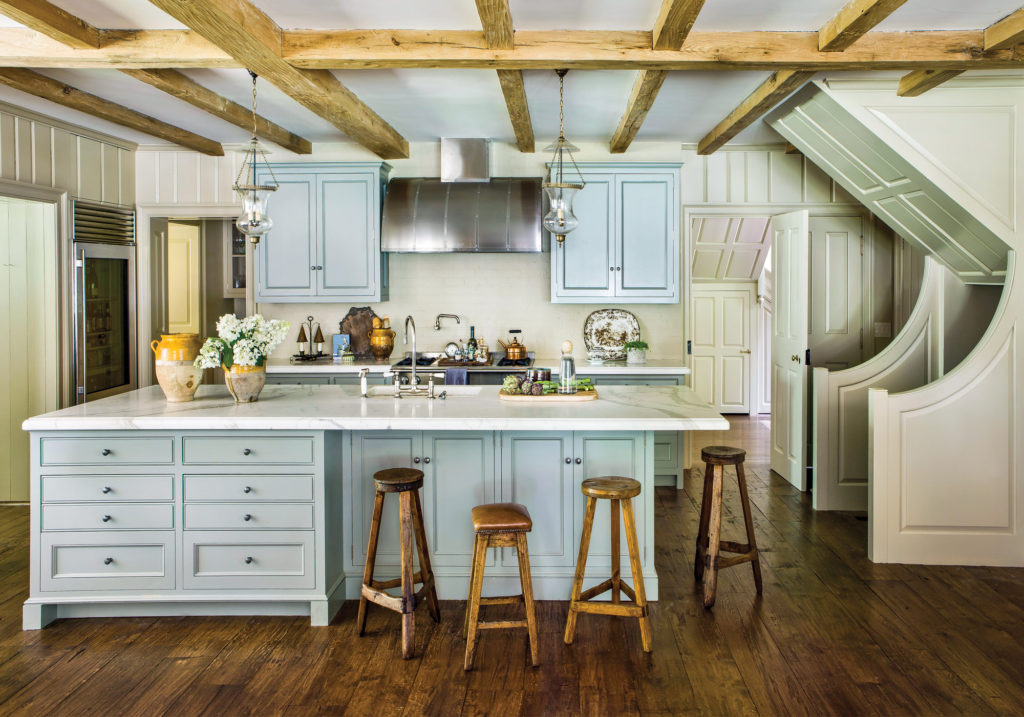 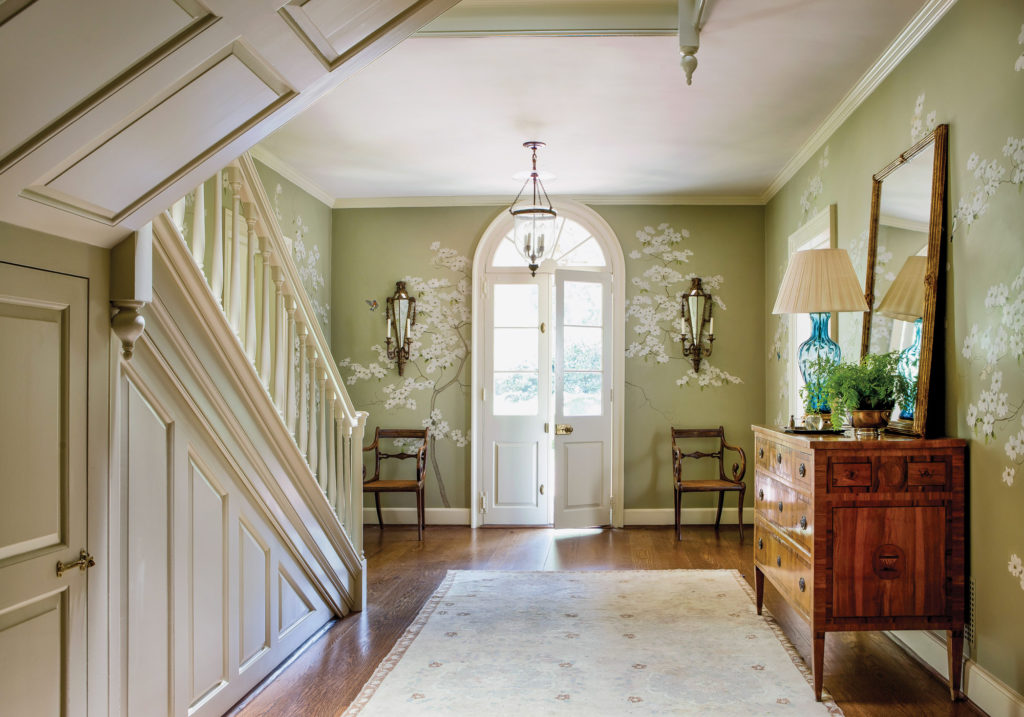 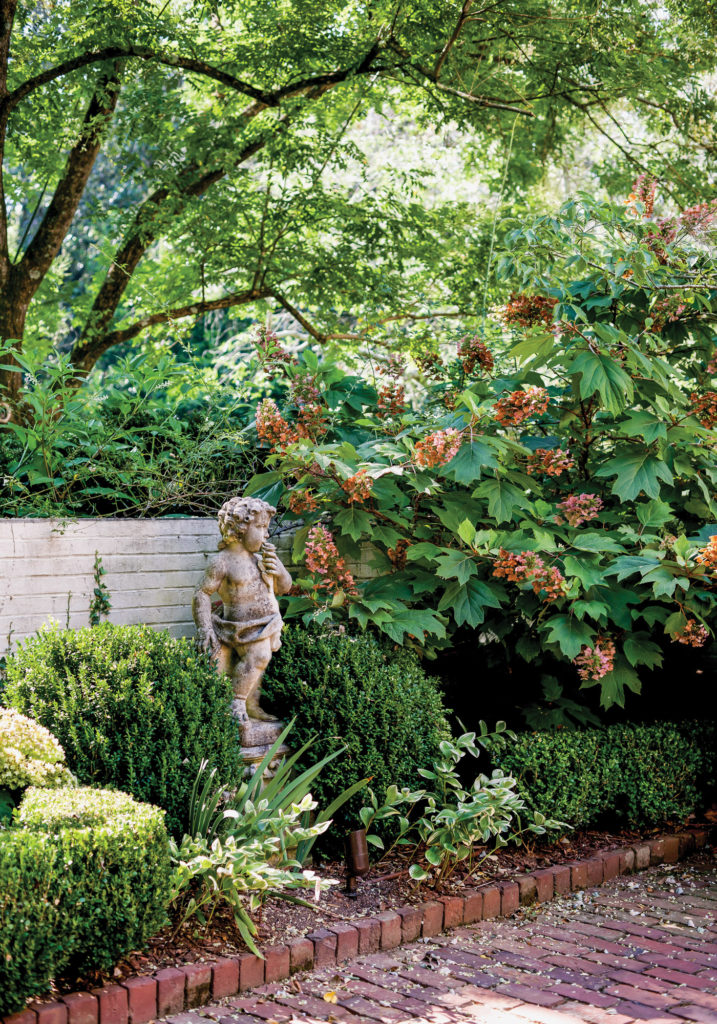 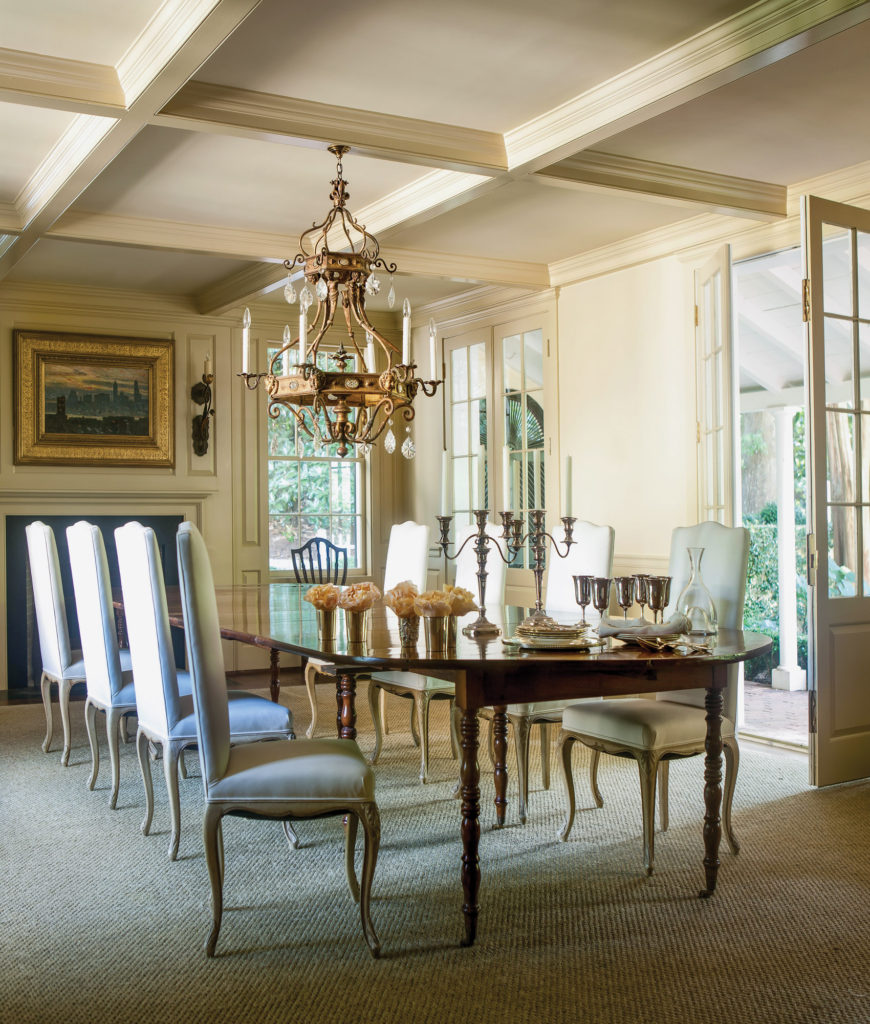 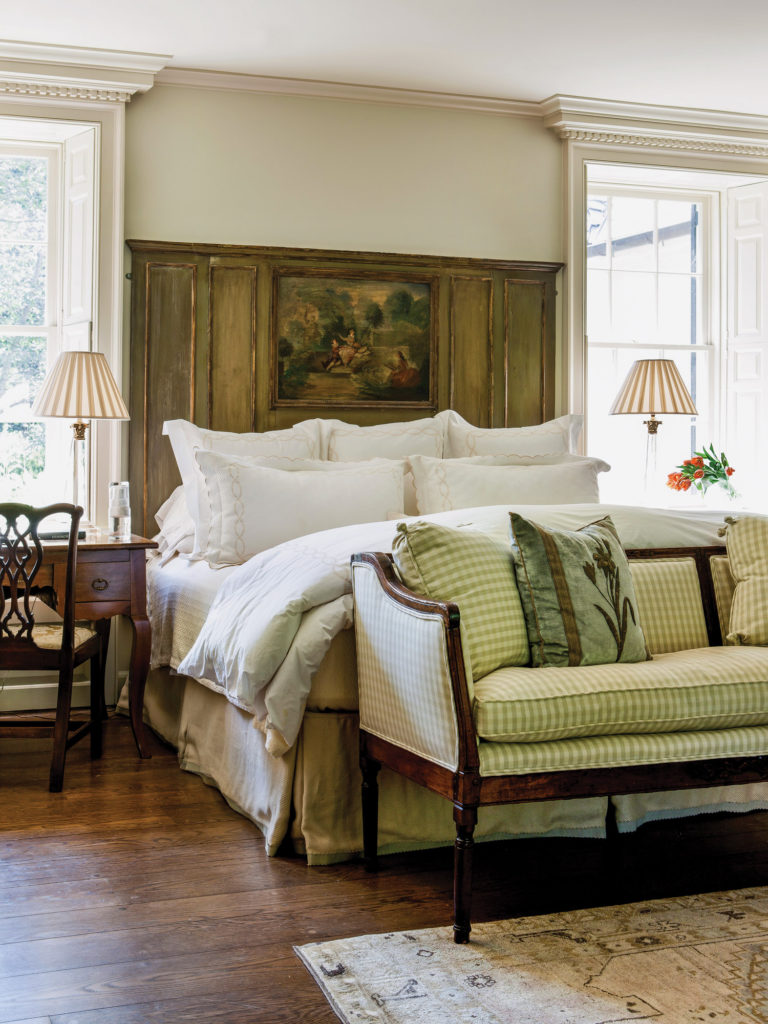 Connor, who works often with Pak, also recognized a well-loved home. “It has a very human scale,” Connor says. “It’s in tune with its setting and gardens.” But clearly the house needed repairs, new mechanical systems, and some restrained redesign.

One of Pak’s biggest tasks was to reassign some of the main floor’s rooms while preserving the existing house. When the Patterson Carr House was built almost a century ago, well-to-do occupants lived in the front of their houses, while the back was the service area: kitchen, butler’s pantry, and servants’ quarters. This original layout had the living room to the right of the entryway. Pak instead placed the dining room there, and made the original, adjoining dining room today’s living room. The servants’ quarters became a family area. The old kitchen and pantry—expanded—became a family-oriented addition that connects to the garage. A small room tucked off that area is now a paneled library.

The breakfast area now faces the courtyard, near the side entry, offering a spectacular view. Pak worked with Atlanta landscape architect Richard Anderson to “amp up” the walled courtyard; flowers in the English gardens sway in the breeze.

The foyer features the original, carved staircase, a stunning tribute to the earlier era, and also the original Athos Menaboni mural of dogwood trees and birds, which was commissioned by Shutze. That entry setting—staircase, mural, and gardens within view—was pure inspiration for Connor: “It was the starting point for the whole project.”

Millwork and walls panelized with moldings were reproduced. Deep windows allow garden views, including one of a very old hydrangea garden at the end of the entry hallway.

The mural’s palette inspired a natural, earthy color scheme throughout, Connor explains. “We invited the garden in, in terms of texture and palette.” But the mural had suffered much water damage. Connor brought in Jill Biskin, an artist and muralist from Athens, Georgia, who did a months-long restoration. (Biskin also painted the pattern in the tiled swimming pool, turning it into a work of art.)

Connor’s visionary approach to the foyer and other spaces includes a minimal number of artworks—contemporary pieces loved by the homeowners—so that they can be truly appreciated. “You need places to stop and rest in a house,” Connor says. “We created that setting by having some fine pieces and some very comfortable pieces. There was a lot of attention to detail: the detail on the skirt of a chair, the pleat of a drape.”

The staircase leads to second-floor bedrooms, including an expanded master suite that now occupies a wing. Pak also added a guesthouse, a pool house, and the new pool.

With the support of the homeowners, Connor and Pak have melded history with modern life. As Pak says, “There was a lot of work and intentionality to honor what was there and support it with functional features.” The new family consider themselves stewards of the house, so the legacy continues.