This is not a vacation house; it is the primary residence for a young family. But since it is located on a lake, the owner wanted a sensibility that is playful, full of light and oriented toward the water.

“She didn’t want a beach house,” says Jennifer Hanlon, who, along with partner David Wantuck, designed this 8,800-square-foot Wayland, Massachusetts, home, built in 2014. “But she did want to acknowledge that the water is there, and to create the feeling of a vacation home.”

Hanlon and Wantuck, whose eponymous design firm is located in Duxbury, Massachusetts, have worked with this homeowner before. Therefore, they knew that while she wanted a light and airy interior in her new house, she is a thorough traditionalist when it comes to architecture. No sleek minimalism for her—she loves historic buildings.

“She wanted to create a house that feels like an old house,” Wantuck says. Surprisingly, “There was no architect on the project; together, the builder, homeowner and us, we designed a house that has the casings, moldings, millwork, and traditional details that give it the look and feel of a house that’s been there for a long time.”

The new family home is L-shaped, with garage doors and a front entry facing the driveway that approaches the inside of the L; the back arms of the house are oriented toward the water and include a pool deck, a spacious dining table and chairs tucked under a pergola and a lower level porch act as an outdoor living room. Faced with native granite, the basement level rises to a two-and-one-half-story gambrel-roofed house sheathed with clapboards.

“The house feels very traditional,” Wantuck explains. “But it is also quite energy efficient, with solar panels on the roof and lots of insulation in the walls and ceiling.”

“It was to be green, it was too informal and all about what’s outside,” Hanlon says. “But the primary goal for the homeowner was to create a family home where people drop in and out, where there’s always cooking going on and where guests stay at all times of year.”

The signal to this informal and welcoming environment is just inside the front door, where the newel post of the staircase is in the form of a lighthouse. “She saw that on Martha’s Vineyard and just loved it,” Hanlon says.
She and Wantuck developed a décor based on the owner’s favorite greens, blues and pale sand colors. Oak flooring with a hand-scraped espresso finish is an inky foil for the furnishings.

“We love the high contrast of a light interior against a dark floor,” Wantuck says. “It makes the furnishings seem to float.” He adds that each room was designed to stand on its own while its color scheme relates to neighboring spaces.

In the living room, light cream hues dominate the space. Paper-backed linen fabric lines the walls, creating texture in a calm, restrained environment. Antique mirrored glass tops the coffee table, while an antique bergere carries out the themes of contrast with black leather upholstery on a frame painted with white gesso. The indoor dining room, too, is a study in texture and gentle tones with white-painted wainscoting and wallcovering above it that resembles gray driftwood. Classic dining chairs are upholstered with pale gray leather. Opposite the chairs, a banquette faces the hefty, rustic table; an antique settee with a well-worn white finish provides additional seating. The room’s crowning glory is a black metal and crystal chandelier.

“We love the contrast of the formal chandelier over the casual trestle table,” says Hanlon.

The kitchen is the heart of a home designed for a passionate cook. Custom cabinets feature simple paneled doors and are crowned with transom windows, ornamented with X-shaped muntins. The perimeter counter is topped with honed slate, while the large central island wears a counter made of walnut, with a marble end for rolling pastry. Classic white subway tiles line the walls; corbel brackets, beadboard on the ceiling and a soapstone apron sink underscore the traditional kitchen sensibility. Over the cooktop, the backsplash depicts a large ceramic Gerbera daisy surrounded by
a tile mosaic.

The adjoining family room echoes the X motif on cabinetry. In a room of serene seaglass and sand-colored furnishings, a raffia wall covering provides considerable texture. Transoms above the windows bring additional light without introducing the shock of the new provided by vast expanses of glazing. A banquette upholstered with striped blue and green fabric separates the family room from the kitchen.

Outside the kitchen is a sunroom with walls covered in green strié paper. Here the owner expressed the informal, playful spirit of the house with a daybed suspended from the ceiling to make a swing. The wall above is decorated with old ironstone and Staffordshire plates. “It’s graphic, textural, and something other than the predictable piece of art,” Hanlon says.

The bedroom reflects the tastes of its occupants: the young man of the house wanted bunk beds, while his sister wanted a bright pink room. Quiet lavender dresses a guest room, while the master bedroom makes ample use of the soft blues and seafoam greens, beloved by the homeowner, colors that flow into the luxurious bathroom.

The owner has just what she wanted: a home that others will find comfortable. “There’s always someone cooking something good,” Hanlon says. “Her mother comes over and takes over in the kitchen as well. It’s a happy home.” 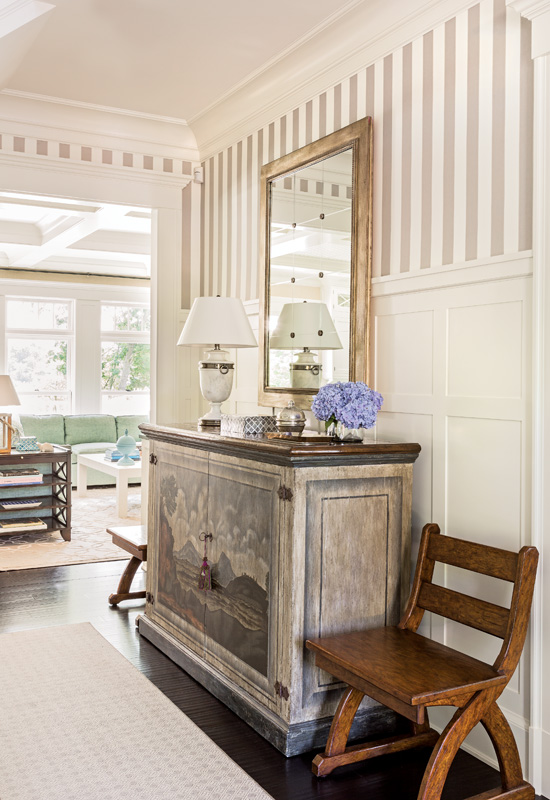 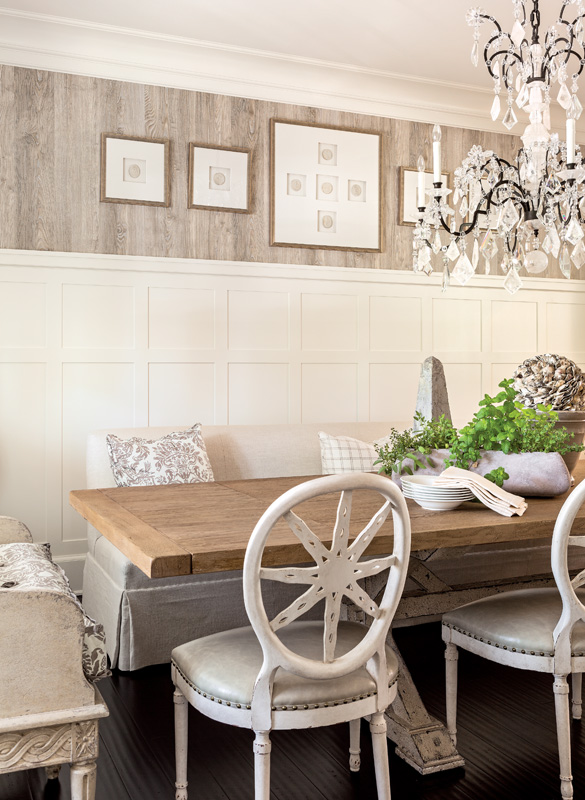 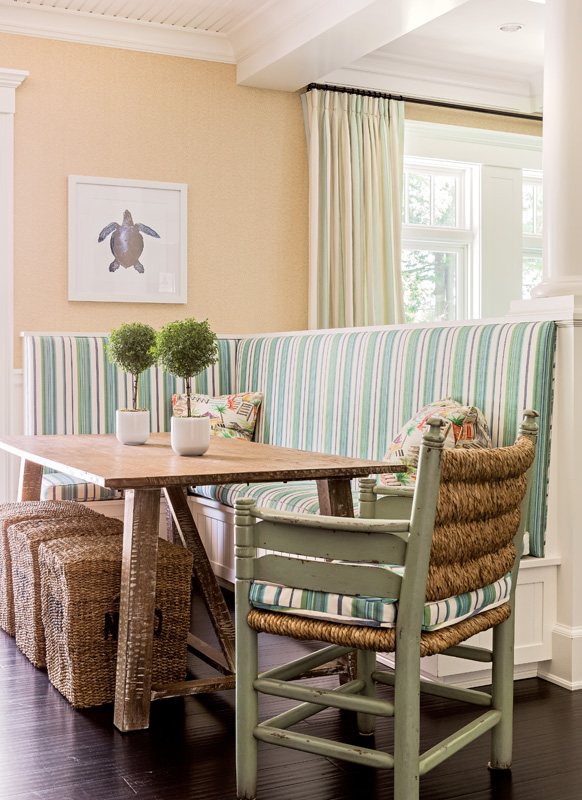 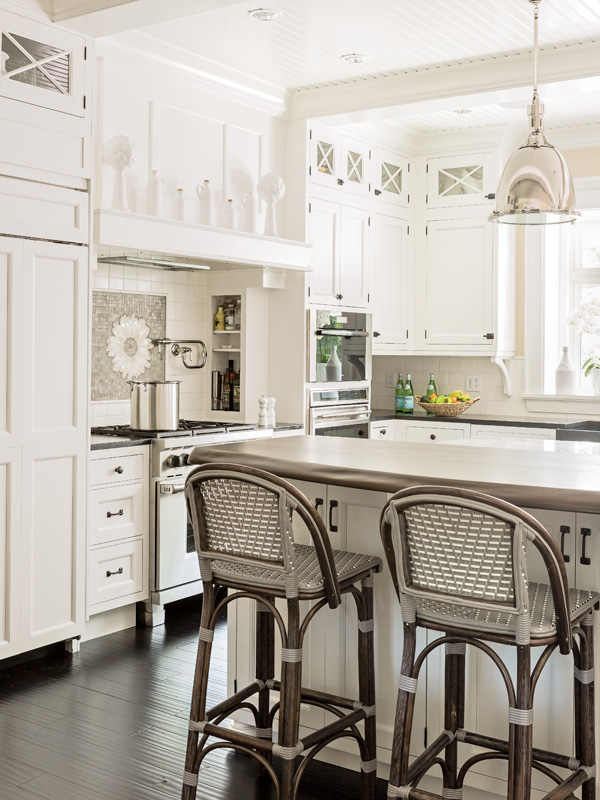 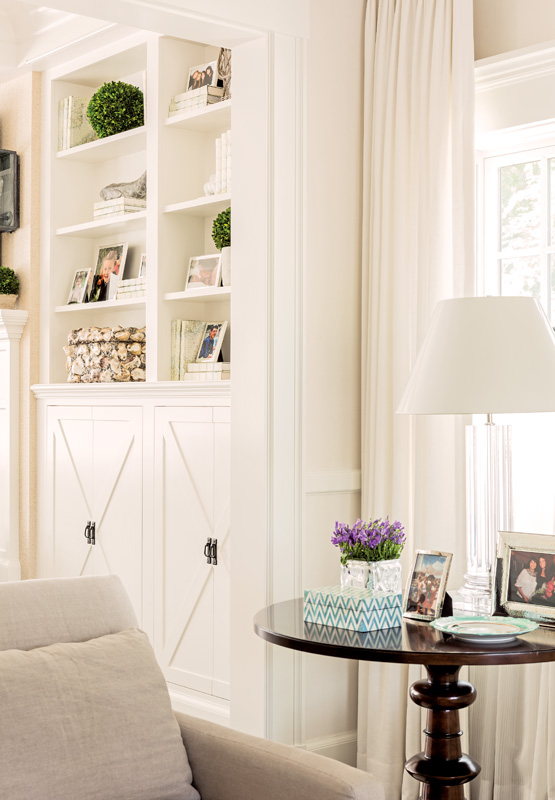