The historic town of Plymouth, Massachusetts, has much to offer beyond its Pilgrim heritage. Plymouth flourished as a shipping and manufacturing center in the 18th and 19th centuries; that prosperity left a glorious array of structures.

One exquisite Federal house here is now a museum owned by the Plymouth Antiquarian Society. Hedge House was built in 1809 for a local merchant named William Hammatt. Thomas Hedge took ownership in 1830, and commissioned a three-story ell. The interior of the house recently has been restored.

Hedge House came close to demolition in 1918, when the last family member in residence passed away. The town of Plymouth purchased it, intending to build Memorial Hall on the site. But a group of local women saved the building and moved it in 1924 to its current location facing the waterfront. While the exterior had been maintained over the decades, the interior had not; decades of white paint, it seemed, had obliterated any traces of the house’s Federal grandeur.

The Society’s executive director, Donna Curtin, began work in 2002 with a search for evidence, which she hoped would guide the re-creation of original interiors. Luck was with her as two of the original wallpapers were discovered.

With wallpapers in the entry hall and best parlor determined, Curtin set about selecting appropriate floor coverings for the rooms. As a historical design consultant, I helped her choose two archival patterns dating from the early 19th century, and the carpets were then woven in England. 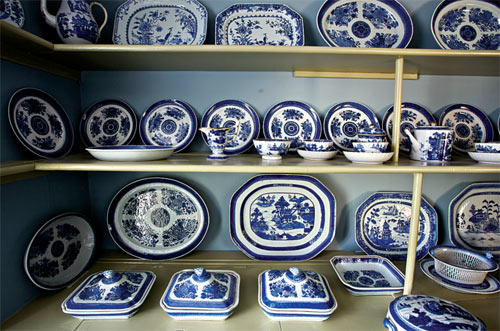 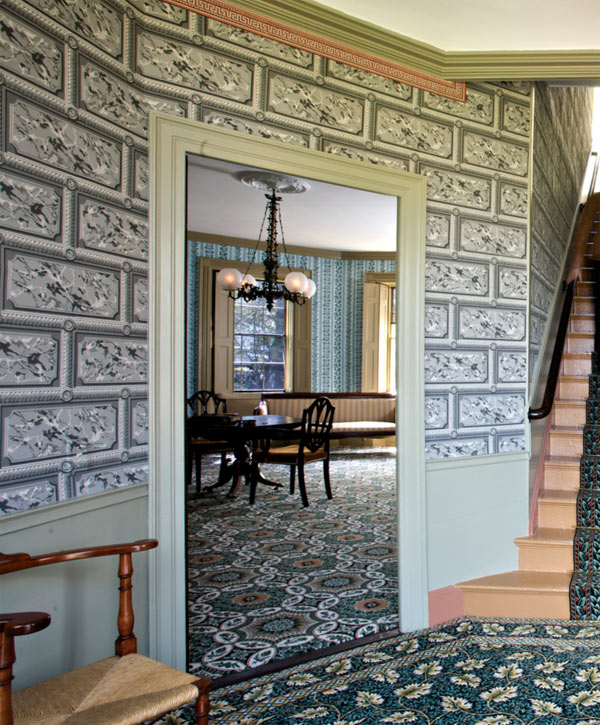 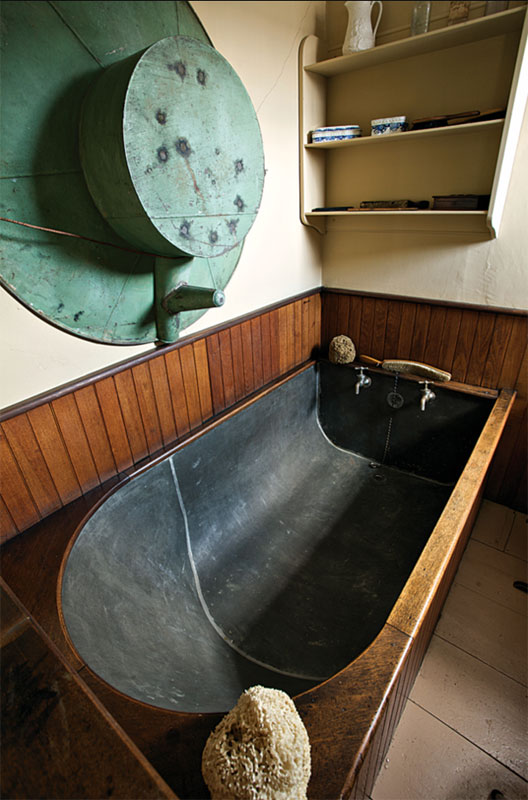 With its octagonal walls and grand center staircase, the entry hall features a skillful reproduction of a block-printed paper simulating marble ashlar blocks, a distinctive motif of the period. The pattern was revealed as a negative on the original plaster of the walls; that image, along with reference to what we know of the era’s colors, permitted the reproduction. A non-directionally patterned carpet, augmented with a border (at the time, the height of luxury) was laid to conform to the space.

In the best parlor, carpeting (by J.R. Burrows) laid wall to wallis a documented Regency pattern from the early decades of the 19th century.

In the best parlor, wallpaper was reproduced from an existing document, and once again, we fitted an authentic carpet with a complementary archival pattern. In this room, Curtin worked to acknowledge the various decades of the family’s residency—rather than confining furnishings to a specific decade. Most notably, the Rococo Revival gasolier, painstakingly restored by local artisan and historian David Berman, embellishes the space with an unusual verdigris finish. Marking the decoration’s evolution is a concept that continued throughout the home. In the family parlor, Federal, Empire, and Victorian furnishings happily coexist.

Antique dimity bed-hangings have been restored to the four-poster bed, a family piece still in the house.

Upstairs, the north bedchamber contains a spectacular canopied bed and other family furnishings, including a slant-front desk with oxbow drawers. Nearby, a late-19th-century bathroom has been carefully preserved; it may appear Spartan, but it was luxurious in its time. Further work on the house will include interpretation of another bedroom to its appearance in the middle of the 20th century.