When Mary Ann Gilchrist was growing up in the charming southwest Tennessee town of Savannah, strangers were always trooping through the house. Her home—the circa-1830 Cherry Mansion, a brick Federal house with a Greek Revival addition overlooking the Tennessee River—played a pivotal role in the Civil War, hosting Ulysses S. Grant and the Union army in the weeks prior to the Battle of Shiloh. Mary Ann’s parents happily opened up the house to curious tourists in their spare time. In 2004, Mary Ann moved back into her childhood home with her husband and two sons, and she’s kept up the hospitable tradition, guiding visitors through on weekends and during vacations.

In 1862, the Cherry Mansion saw history, tragedy, courage, and intrigue; it also represented the deep divisions between North and South. But that’s not what motivated Mary Ann’s father, Bob Guinn, to buy the house in 1934. “This house was his passion, but I never got the feeling that he was into the Civil War,” she says. “My father was from this area; he played in the yard as a child. A big magnolia tree he remembered is still here.”

Guinn became a historic preservationist long before it was chic because he loved his hometown, Mary Ann explains. When a grand but long-neglected house was threatened with destruction, he stepped in to save it. “The Cherry family had died or moved away,” Mary Ann says. “The porches were rotted away; the hallway was damaged. It took him three years to restore the house.” 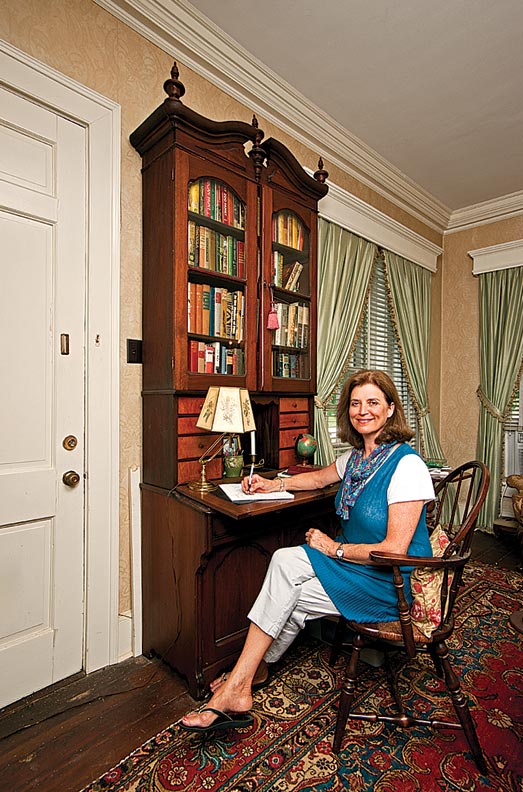 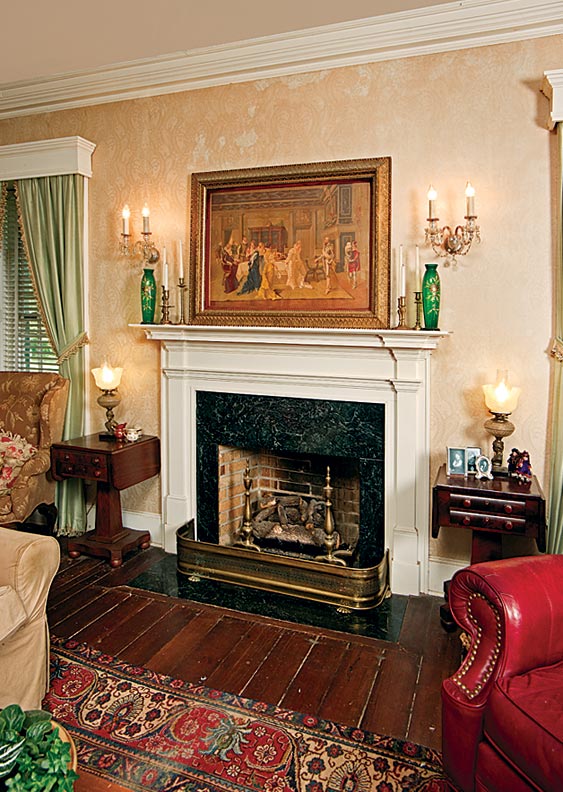 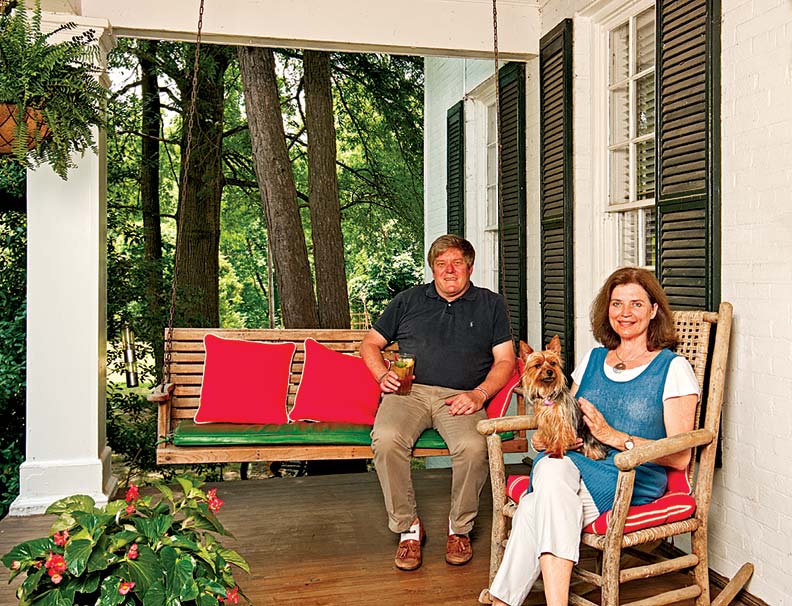 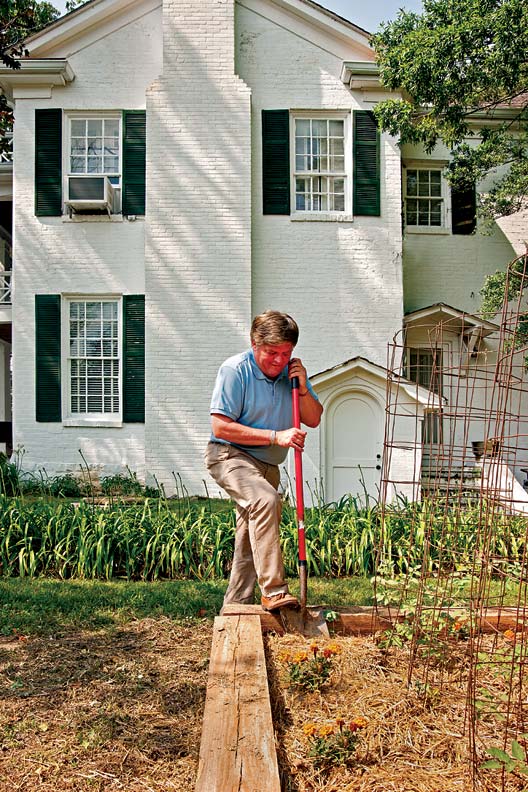 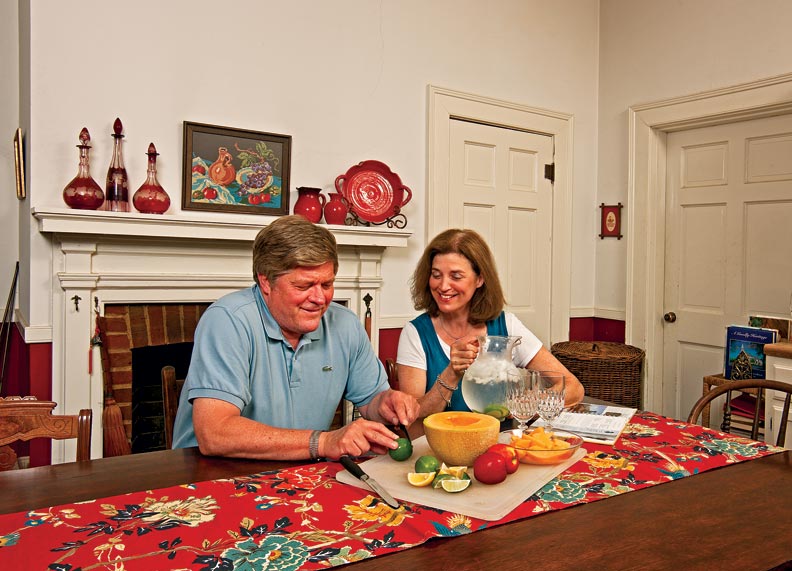 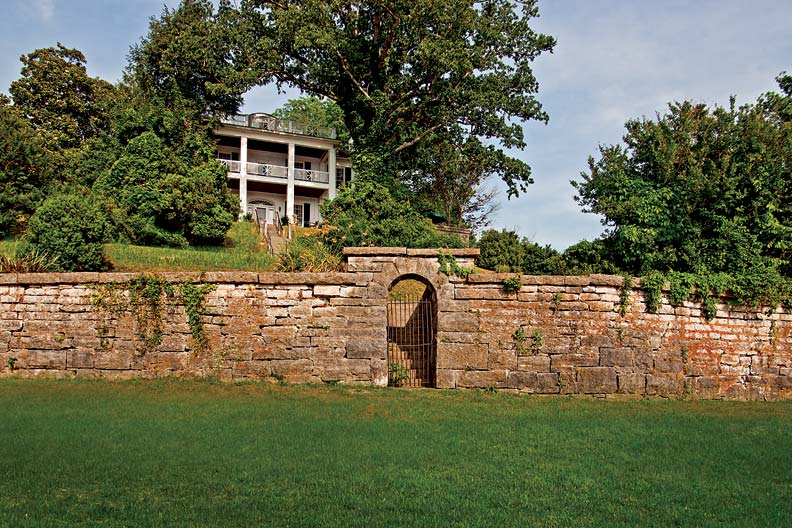 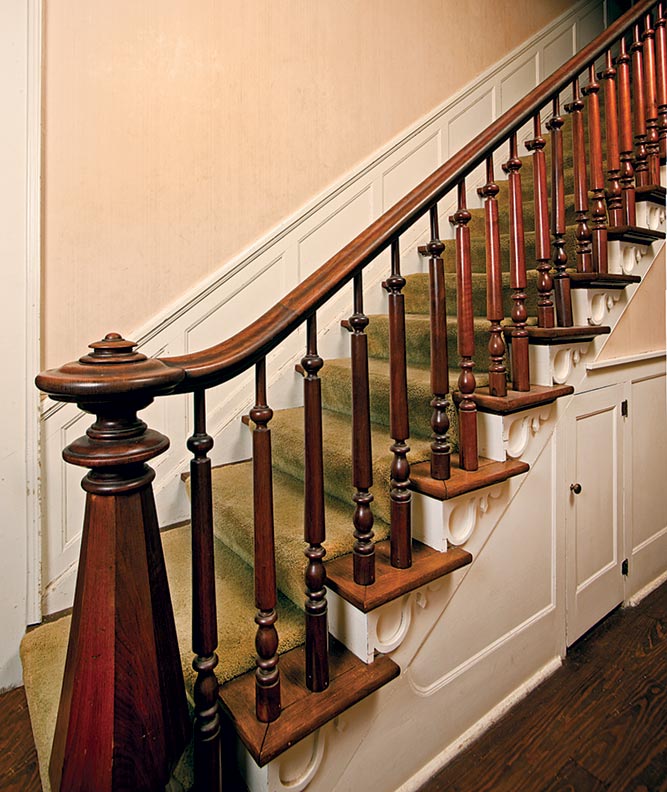 In 1821, James Rudd built a log cabin and established a landing and ferry on the grounds of the Cherry Mansion; several years later, he sold Rudd’s Ferry to David Robinson, who built the nucleus of the present house. The original L-shaped, two-story house was built from bricks made on the riverbank and surrounded by a substantial stone wall. It consisted of three rooms on each floor; the downstairs rooms boasted 12′ ceilings, carved poplar chair rails and wainscoting, paneling, crown moldings, and elegant fireplace mantels. In 1840, Robinson added two more rooms to the finest house in town. When his youngest daughter, Sarah, married William H. Cherry in 1842, the house became their wedding gift.

Cherry, a prosperous merchant, cotton broker, and staunch Unionist, was pleased to open his home to Major General Ulysses S. Grant when the Union Army of Tennessee arrived here in 1862. By then, widower William Cherry was remarried to Annie Irwin. She and her two sisters, also married to Cherry relatives, supported the Confederacy.

Grant set up his headquarters in a tent on the lawn while he slept in the house. He took his meals here, often joined by other Union generals. After dinner, the Irwin sisters serenaded the Yankee officers at the piano. Word has it that Grant removed his uniform coat in their presence out of respect for their sympathies. Stories also tell of the Irwin sisters carrying memories of their dinner conversation with their Union guests to the Confederate soldiers the next day. Records show that a federal patrol stopped the women as they attempted to smuggle boots, socks, and other supplies to their Rebel relatives under their hoop skirts. They were taken into custody and sent to a collection point for prisoners, but when Grant heard of their capture, he ordered their release following their promise to desist.

Confederate troops fired on encamped Union soldiers across the river at dawn on April 6, 1862. Grant, taken by surprise, abandoned his breakfast to ferry to the battle developing around a crude log house of worship known as Shiloh Church. By the time one of the bloodiest battles of the Civil War ended, nearly 24,000 men were killed, wounded, or missing. A field hospital was set up in the yard of the Cherry Mansion, and by April 9, hospital boats were moored in the river below the house. The Cherrys joined other Savannah families in caring for wounded soldiers, both Confederate and Union. Two Union generals, W.H.L. Wallace and C.F. Smith, died at Cherry Mansion. Both had been among the officers entertained by the Irwin women.

After the Civil War, the house entered a long period of decline. Late in the 19th century, when a bridge replaced the ferry across the Tennessee River and Savannah grew into a substantial town, the house was reoriented from the river to the dirt road leading past what had been the back door. Its classic Southern dogtrot design, featuring a wide central hall and identical Federal front and back doors with side- and fanlights, enabled the switch. When Bob Guinn bought the house, he removed the rotted wraparound piazzas and replaced them with front and back porches, formalizing the switch by giving the house distinctive front and rear façades.

“In archival photos we see that the original piazza columns were quite slender,” Mary Ann says. Her father’s hefty replacements speak not of Empire elegance, but of the muscular Arts & Crafts styling popular at the time. He crowned the roof with a widow’s walk; its balustrade and the new porch railings were inspired by the Chinese Chippendale style popular during the 1930s.

When Bob Guinn bought the house in 1934, the Cherry Mansion had one small bathroom and a single closet. Guinn converted the closet into a new upstairs bath and installed a powder room off the hall, under the staircase. He built an inside kitchen, then dismantled the outdoor kitchen and outhouses. He added dormers to bring light into the upstairs rooms and added storage in the form of closets built into bedroom corners, taking cues for their design from the bedroom doors.

Original architectural elements in the Cherry Mansion include the Southern longleaf pine flooring, crown moldings, and beautifully designed window pelmets. The house’s eight fireplaces boast their original Federal mantels, each one different. “Dad added Italian marble to the downstairs fireplaces,” Mary Ann says. “The upstairs fireplaces have their original brick surrounds; I confess that I like them better.”

Aside from her father’s modernization, the rooms housed by the massive white-painted brick walls look much as they did in 1862. The piano the Irwin sisters played for the Union generals still occupies a corner of the parlor; the opposite corner is home to the desk used by General Grant. Bob Guinn didn’t save them because of their Civil War associations, but because they were part of this house before him. An instinctive preservationist, he furnished the house with period antiques, replacing some of the original furnishings that had been ruined after being removed by the previous homeowner and stored in a leaky shed across the street.

For Civil War buffs, especially those fascinated by the complex and bloody Battle of Shiloh, gazing at the piano and desk in the parlor of the Cherry Mansion is an essential pilgrimage. Looking out the window, they can see the landing where the ferry rushed Grant across the river. The view of the opposite bank is little changed since the Civil War; Shiloh Battlefield is now a national park. Against this gentle landscape, the history embodied in the Cherry Mansion speaks of divided families, heroism, and the extraordinary courage of women who performed appallingly grisly humanitarian work.

Mary Ann Gilchrist, like her father, understands her home’s importance. “When I grew up, my dad always said, ‘Promise me you’ll take care of this.’ Now I say the same thing to my sons.”