Kim and Debbie Chatfield’s detailed knowledge of their house goes back only to 1899, the year when Kim’s great-grandparents, Albert and Helen Chatfield, bought this saltwater farm as a summer retreat, but they can tell you virtually everything that’s happened here since.

They know the source of the settee that’s graced the parlor, upholstery intact, for five generations (Macy’s); when the 1895 Baldwin grand piano was moved into the “new” sunroom (1923); and the provenance of each of Great-Grandmother’s silk fans, which hang, framed, beside the cabinet that holds her Canton china set.

Debbie is an interior designer, and her husband, retired from the restaurant business, has had considerable experience in renovating old buildings. But their clarity of memory in this case is largely the work of Kim’s great-grandmother, a formidable hostess and inveterate documentarian of family life whose personality still resonates within these walls. As a result of her example, this house—a once-simple Cape expanded and spruced up in genteel neo-colonial style—has spent the past century in the care of a family that clearly cherishes its history. When Debbie and Kim updated the old summer place to serve as their year-round home, they paid homage to that history by preserving the house in a form that the matriarch would instantly recognize. 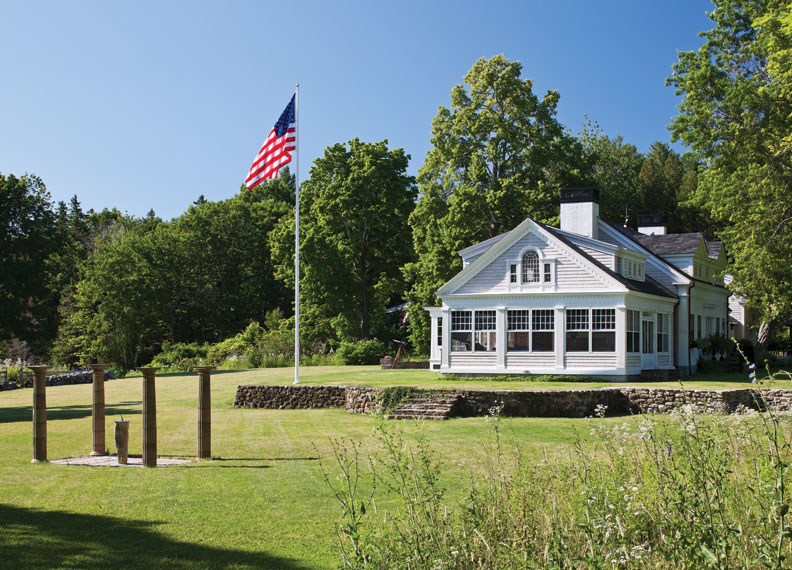 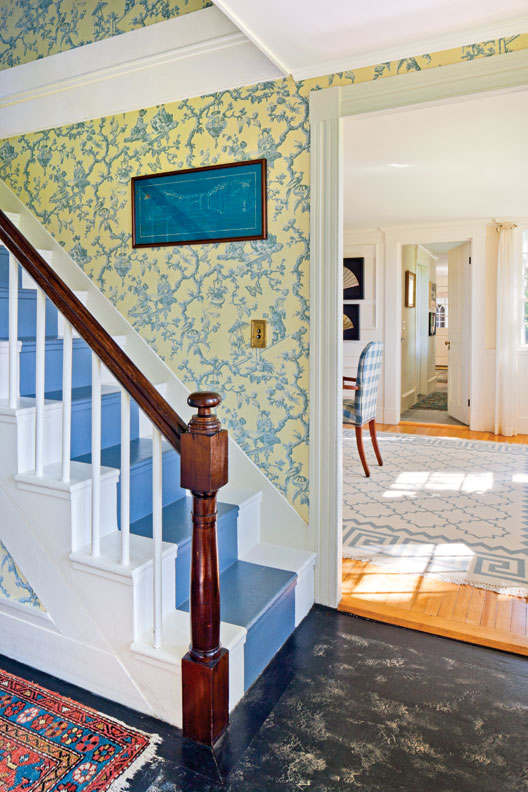 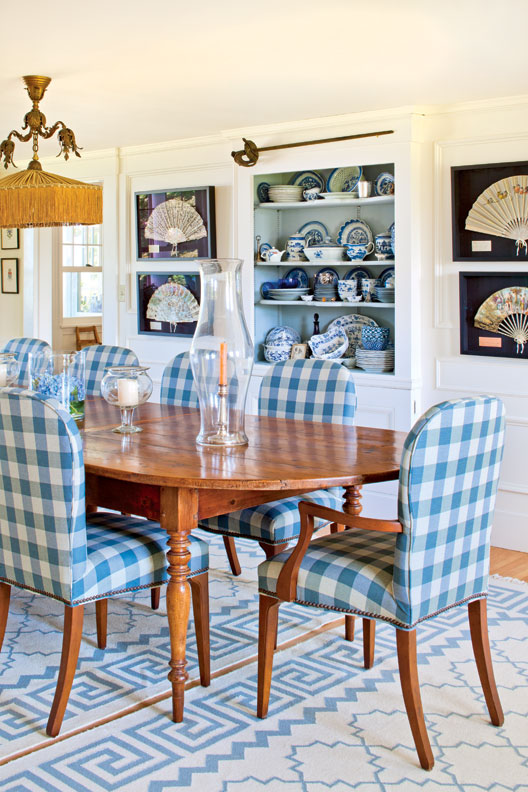 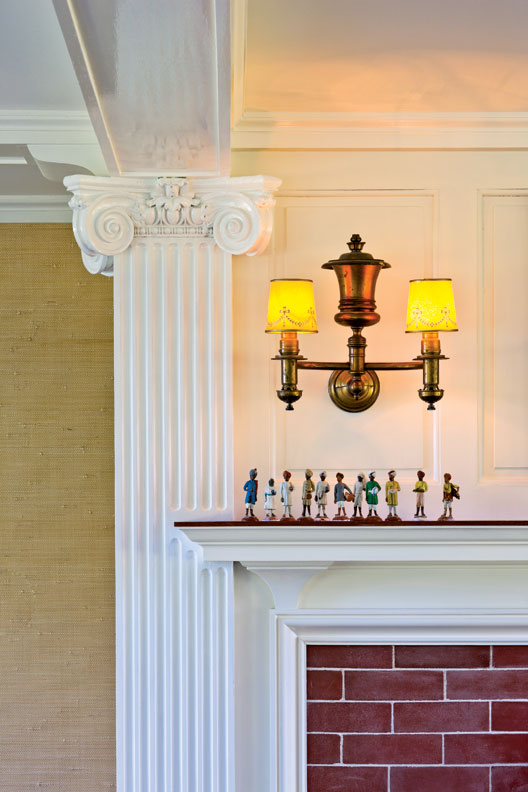 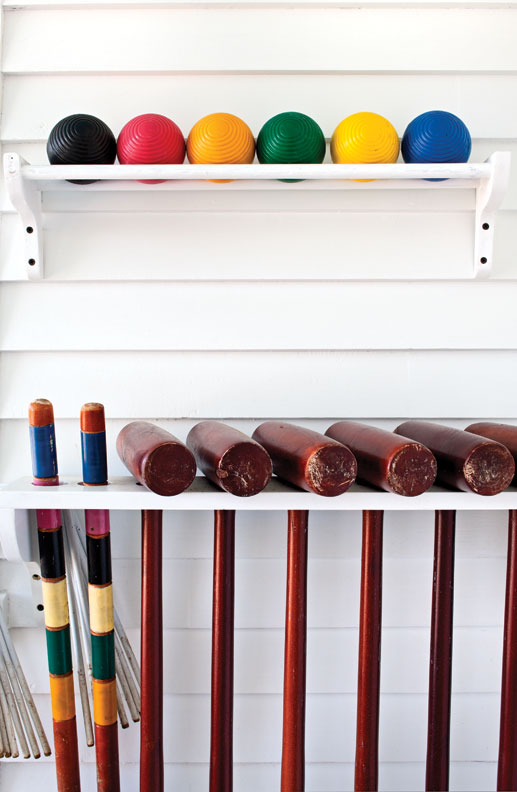 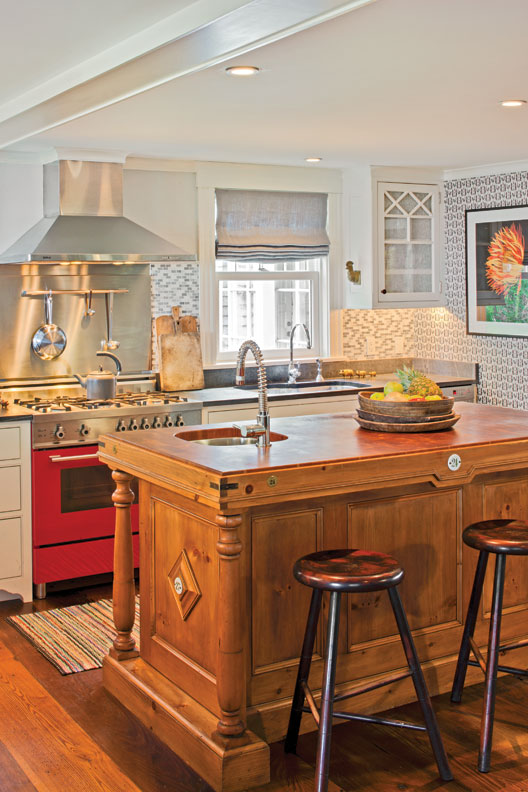 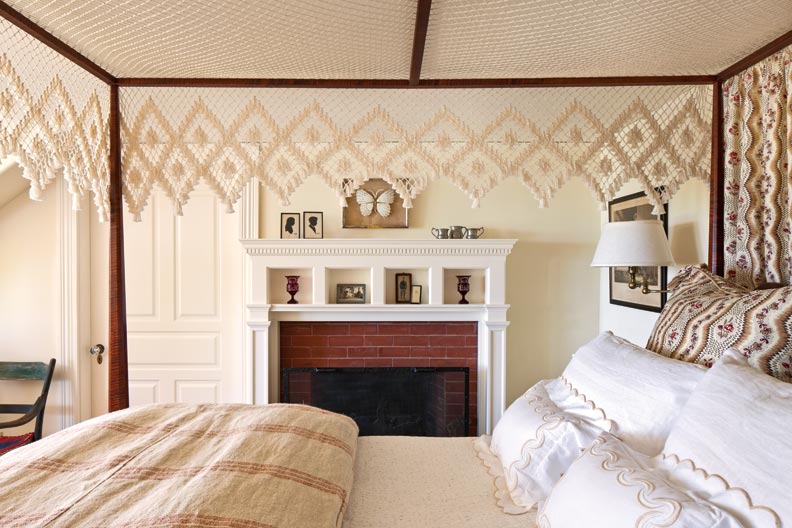 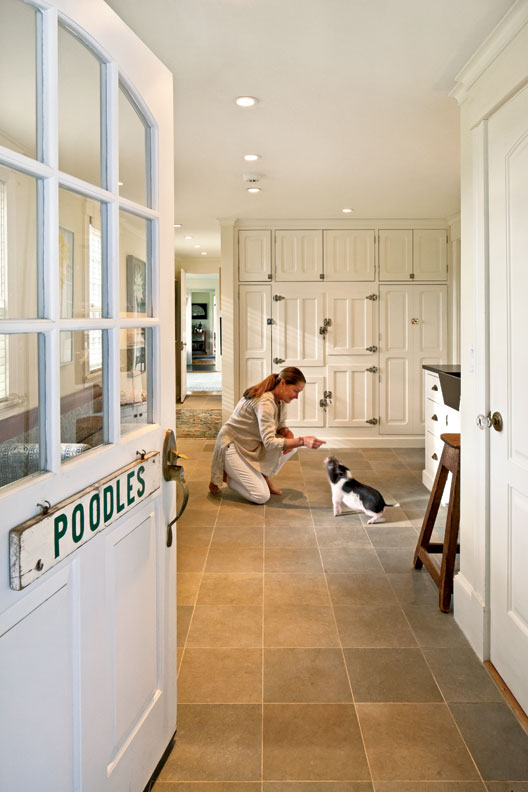 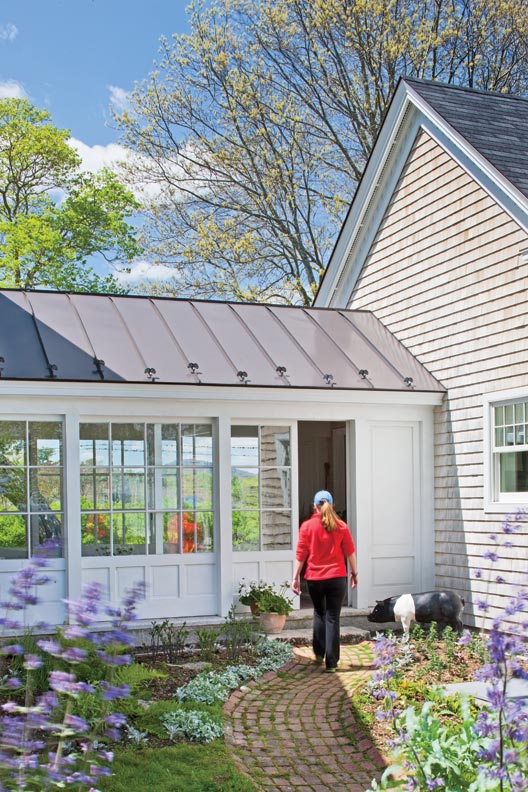 “This is probably an 1860 farmhouse,” says Kim, touring the original Cape that forms the core of the building, “and it was probably four rooms down and four rooms up.” After moving the building to its current site, Kim’s great-grandparents consolidated the first floor into two spaces—the dining room at the south and parlor at the north—and added a kitchen ell off the dining room. The 1923 sunroom extends to the north, stepping down from the parlor to gain a more generous ceiling height.

Crossing the center hall’s burnished, 100-year-old linoleum (elbow grease courtesy of Kim), we enter the dining room. “And this,” Debbie emphasizes, “is the original dining room.” With the exception of the fireplace that Great-Grandmother replaced with the china cabinet, “it’s always been exactly like this.” To illustrate the point, Kim produces a sheaf of 8×10 photographs shot professionally in 1905. Neither the dining room nor the parlor seems to have aged a day.

Not surprisingly, the kitchen ell was left out of the photo shoot. “That was mostly for staff and [cooking], so there were tiny rooms with no view,” Debbie says. By the time she and Kim took possession of the house, she adds, “it had also developed a serious mold issue.” So while the rest of the building got new insulation, windows, wiring, and a geothermal heating and cooling system, the ell got the heave-ho. In its place stands a new wing with a mudroom, kitchen, and family room on the ground floor and a master bath and dressing room above. An enclosed breezeway links the mudroom to a barnlike garage with a guest studio on its second floor.

Before contractor Richard Lane took a chainsaw to the old structure, though, the Chatfields and architects Meg Barclay and John Scholtz salvaged its cabinetry, plumbing fixtures, doors, and hardware. “Everything we could, we upcycled,” says Debbie, who acted as the designer on the project. A cabinet door with an unusual pattern of glass panes gives the new kitchen a tangible link to its predecessor. Nine zinc-lined doors from the old outside-loading icebox (plus three new doors built to match) front the mudroom’s recycling center and electronics cabinet. Two marble sink counters and a clawfoot tub went into the new master bath.

Where new material was required, the addition drew on the old house for period inspiration. The kitchen and family room’s chestnut flooring, recycled from an old barn, is punctuated with authentic cut nails. The family room’s double-hung windows follow the old house’s twelve-over-one pattern, but with three extra panes in each upper sash, which drops the meeting rails below the room’s sightlines. “There are something like 15 islands out there,” Kim says, pointing toward the bay. Without that little adjustment in the windows’ configuration, “you wouldn’t see one.”

When it came to furnishings, Kim’s great-grandmother left a trove of material to work with. “There are a lot of little things that we found, like tintypes of old relatives,” Debbie says. “She was a historian, so she left notes of who they were, and sometimes the dates. She left copious notes on all the wallpapers—with swatches.” The original mistress of the house also seems to have had a keen eye for space planning. “We have two doors [between each pair of adjacent rooms],” Debbie notes. “So when we have 80 or 100 people in this house, it flows beautifully.” On such occasions, Kim says, “I always give a toast to my great-grandmother. Just before dinner, I say, ‘I know you’re in the room, and we’re having a good time. Thank you.’”