A good house in a good neighborhood of 1920s homes and mature trees, two blocks from the Mississippi River in St. Paul: “It was a perfect size for us, about 1,700 square feet,” says Sandy, one of the owners. They hoped to “put the bungalow back” in period style while adapting the house for modern life. At first they expected that work would be mostly cosmetic. In working with designer David Heide, though, they came to see that this would be a “restoration plus”—much was missing or remodeled, or simply didn’t work. For example, the staircase was closed and in the middle of the small house, where it impeded circulation. Moving it gave them extra space, yet the project was cheaper than an addition. 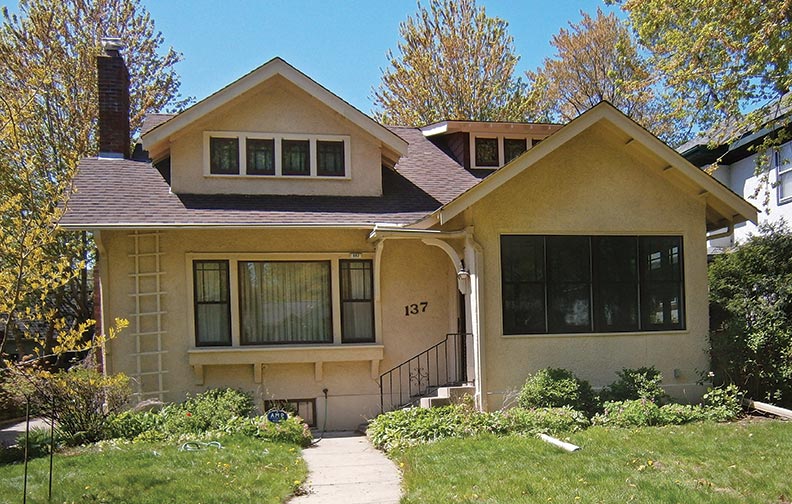 “I’d say what we did is not so much a restoration as a credible reinterpretation,” says David, whose design studio specializes in period architecture. “We probably added more detail than was here originally, considering the built-in seat at the staircase, kitchen cabinetwork, and so on.”

Still, it was important to capture what was true-to-period about the house, which the couple bought from the estate of the original owners’ daughter. She had “modernized” with, for example, a shell-pink kitchen that had a metal panel ceiling. Much of the millwork had been painted over or stripped out; colonnades were cut up and used for shelving in the mudroom. The dining room’s buffet was found shoved into an attic corner. The attic expansion, largely unheated, was finished in Homasote; the roof had to be replaced and turned out to have structural problems. Changing tastes could be read, decade by decade, in layers of tired decorating.

Sandy’s husband, Tim, is a serious woodworker; he built much of the furniture. The plan was to get the house livable so the couple could move in, saving projects for Tim to finish when he retired. Finishing the living-room fireplace and adding built-ins are high on the list. Other future projects include building a second-floor bathroom and remodeling the basement. Changes made during this redesign were in keeping with the conventions of the period. The homeowners relied on their designers’ deep understanding of the era and their familiarity with so many other houses in the area.

“Our biggest improvement was to move the entry at the rear of the house to the new side garden, putting the kitchen at the back,” David says. “The new kitchen is infinitely better designed; a kitchen is easier to use when it’s not a kitchen and a hallway. I like the layering we got from having wide openings between rooms, but with the buffet and kitchen peninsula to define rooms.”

The old porch was divided, half of it becoming an entry foyer and closet, the other half weather protection at the entry. Enclosing the porch was an affordable “addition,” providing needed space and also a buffer between the entry and the living room. Before, the door did not face the street, and opened directly into the living room—not so good, given Minnesota winters.

A two-car garage had stood at the back of the property, its access from the street down a single-lane driveway more than 200′ long. The view from the rear sunroom was of the garage door. So “we picked up the garage, rotated it 180 degrees, and set it down on the other side of the yard,” David explains. That allowed them to remove the driveway, creating a garden outside the dining-room windows.

By relocating the entry from the rear of the house to the side, the kitchen got views of the garden, not the garage. The backyard, newly landscaped, now has a design relationship with the kitchen. Tim and Sandy got their Arts & Crafts home. “David and his firm really delivered on our expectations,” Sandy smiles.