The vernacular English Queen Anne was met in this country by a tradition of wood frame construction and the abundance of affordable, machine-turned and -sawn ornament. Queen Anne often is called “the first national style,” because pattern books, advertising, and railroads allowed them to be built from coast to coast.

The English Queen Anne movement was familiar to architects and builders in the U.S., through magazine articles. Interest in this more vernacular and nostalgic architecture led to the development of the Queen Anne, Shingle Style, and Tudor and Elizabethan Revivals in this country. Of all these, the Queen Anne was most popular. Who can’t identify these late Victorian confections, capacious and comfortable, the quintessential “old house with nooks and crannies,” towers and bays?

Robust but lighthearted exteriors, with their sprawling façades, with towers, verandahs, and fancy-butt shingles, hint at the sweetly eclectic rooms that were found inside. Even small, cottage-like examples are recognizable by their colored-glass windows and gingerbread. The Northeast, already heavily populated in the 1880s, has comparatively fewer examples than you might expect. Go south and west, however, and find the style more prevalent and more fanciful. The West Coast and resurgent areas of the New South have the most dizzying examples, tower house to row house.

The English Queen Anne movement of the mid 19th century is easily traced to the famous architect Richard Norman Shaw, a Gothicist. He and other Aesthetic reformers looked back to the reign of “good Queen Anne,” 1702–1714, when workmanship was emphasized and architecture was vernacular. In its original philosophy, the Queen Anne movement paralleled that of William Morris and Arts & Crafts reformers. (Shaw did not, however, revive the motifs from Queen Anne’s short reign; rather, his buildings looked back to the late Tudor–Gothic, Elizabethan, and Jacobean periods.)

As it flourished in America, of course, the idea was transformed. Ye olde simple brick house of the 17th century became, in its 1880s revival, the most complex and surface-ornamented of Victorian house styles.

The first American Queen Anne house is probably the half-timbered Watts–Sherman House in Newport, R.I., built in 1874 by Boston architect H.H. Richardson. By 1880 the style appeared in pattern books—adapted for city lot and simple cottage. The explosion of turned ornament led to the spindlework interpretation, called Eastlake after the English tastemaker and furniture designer. By the 1890s, Free Classic adaptation was widespread. Now porches had classical columns instead of turned posts. Houses also had Palladian windows and pedimented entries—the signs the Colonial Revival had begun.

The Queen Anne architectural style coincided with the reform movements of the 1870s and 1880s, a move away from the florid, heavily carved, over-embellished interiors of preceding decades. For color and treatments, look to the Aesthetic Movement and Anglo–Japanese styles, the recommendations of Charles Locke Eastlake, and early English Arts & Crafts taste (such as wallpaper and rug designs by William Morris). These influences mingled nostalgically with various antiques and symbols of “the old [colonial] days.”

This is the time period when the tripartite wall treatment of frieze/fill/dado was ascendant. Tastemakers advocated such creative finishes as a wood wainscot, with wallpaper, cloth, paint, and stencils, all while keeping the middle space, the fill, relatively neutral. Ornament and decoration was “flat,” meaning stylized or abstracted, not shaded and three-dimensional or literal.

The dominant entry hall deserved special attention with its paneling, fireplace, and built-ins. Embossed Lincrusta–Walton wallcovering was popular, as were damask and velour. Patterns were exotic: Japanese or Moorish by way of England. The dining room was often done in mahogany or cherry, or ebonized. (Walnut was by now old-fashioned.) Plants were to be used as inexpensive decoration. 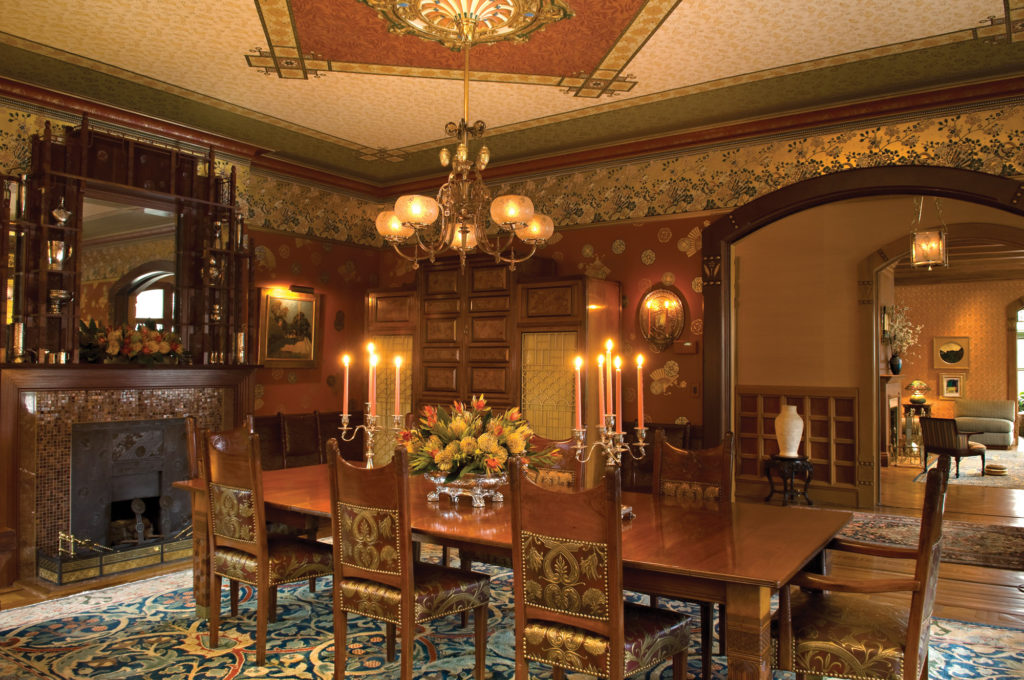 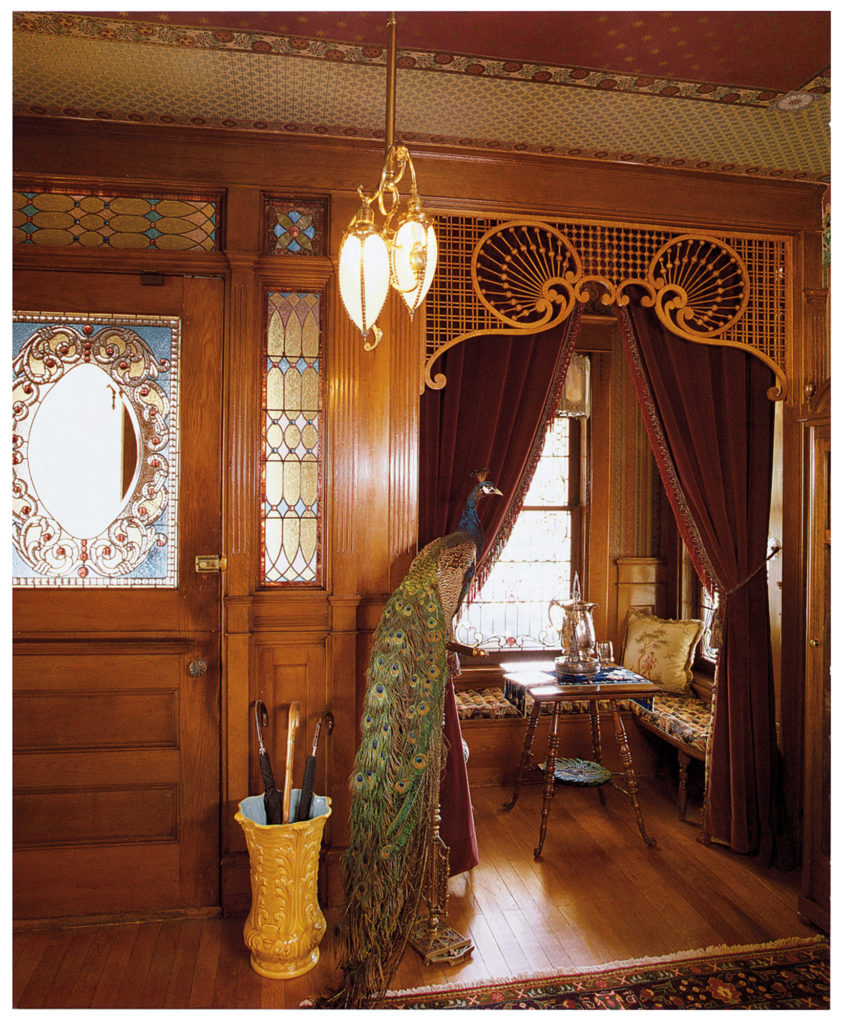 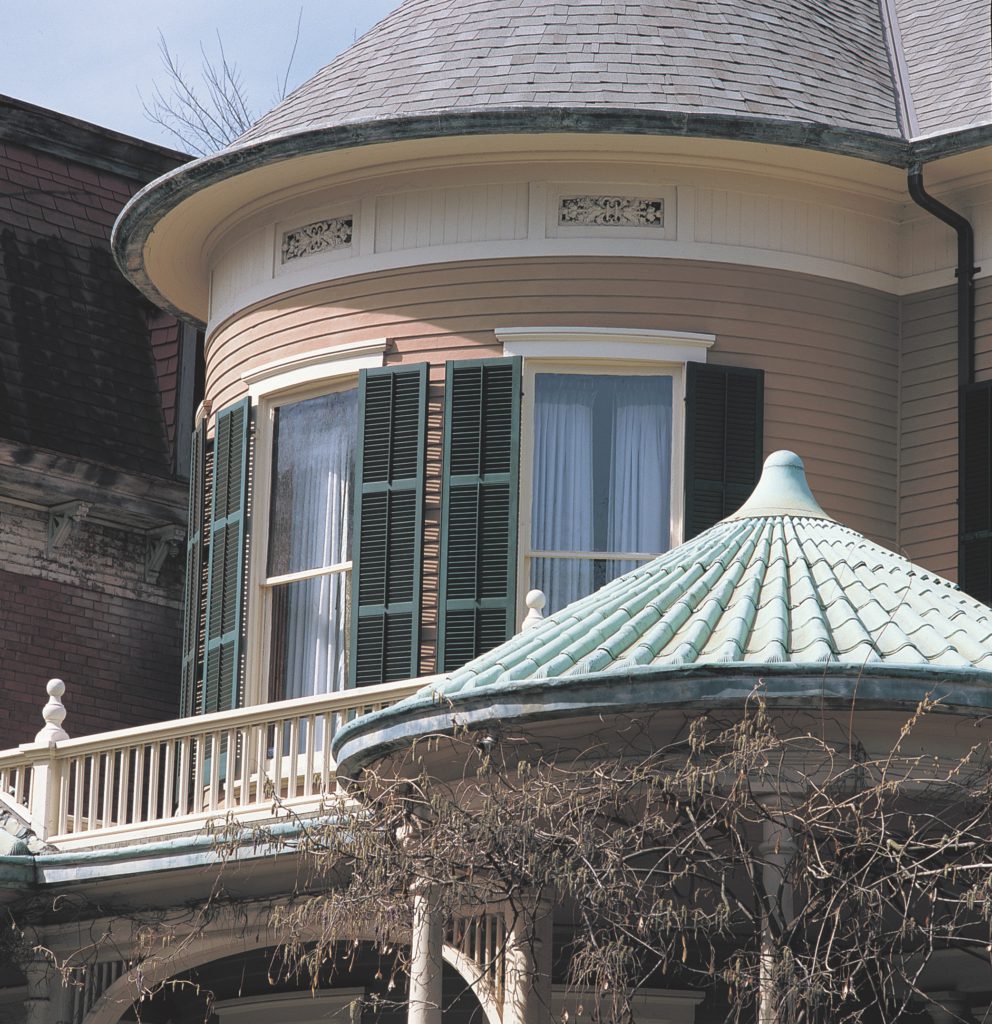 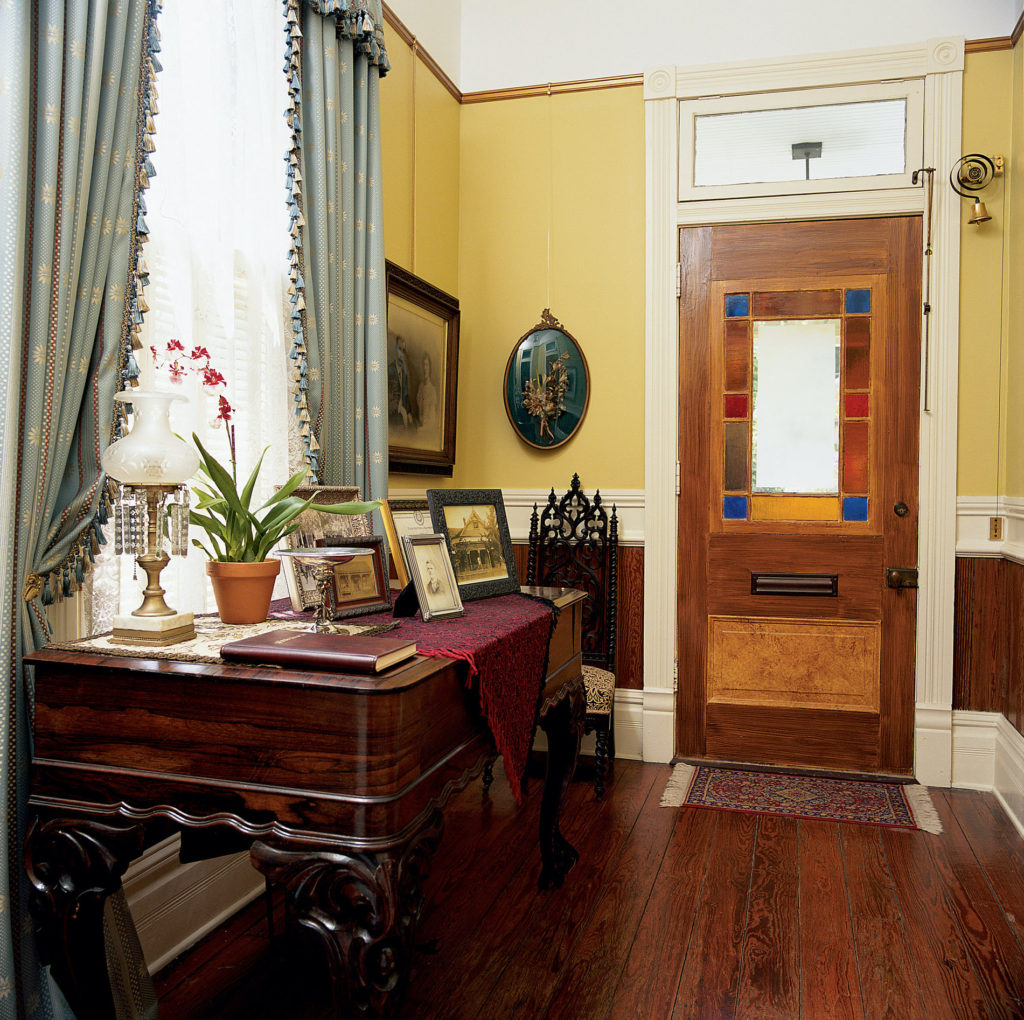 • irregular massing The plan is neither classical nor symmetrical. Bays, porches, extra gables, balconies, and even turrets break the box. Roofs and footprint are often complex.

• texture Bold and decorated surfaces are broken by a change from stone or clapboard to shingles, the latter often with fancy-cut butts. Belt courses, brackets, and balustrades keep the eye moving.

• multi-light windows The so-called Queen Anne window has a border of small, square lights (panes) around a clear center light. Transoms and unusual muntin patterns are not uncommon.

• tower or turret Not all but many houses have a corner tower (which extends to the ground) or a turret, faceted or round. Towers, bays, and fireplace corners fill Queen Anne houses with “secret” nooks and crannies.

• verandah The capacious porch is an American Victorian invention. Look for wraparound porches, sometimes enveloping a porte-cochere. Modest houses have a front porch or entry portico.

Related to Gothic Revival, Shingle, and Free Classic styles; not every example is a tower house. 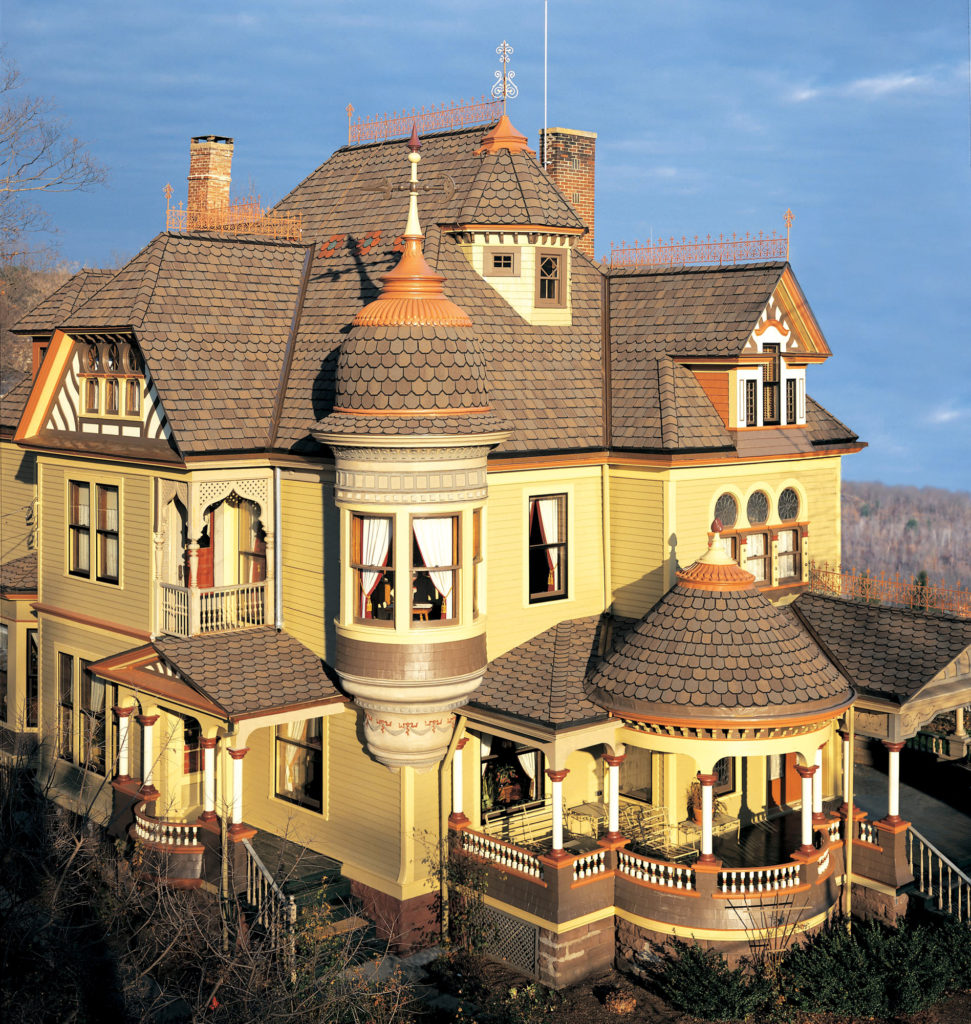 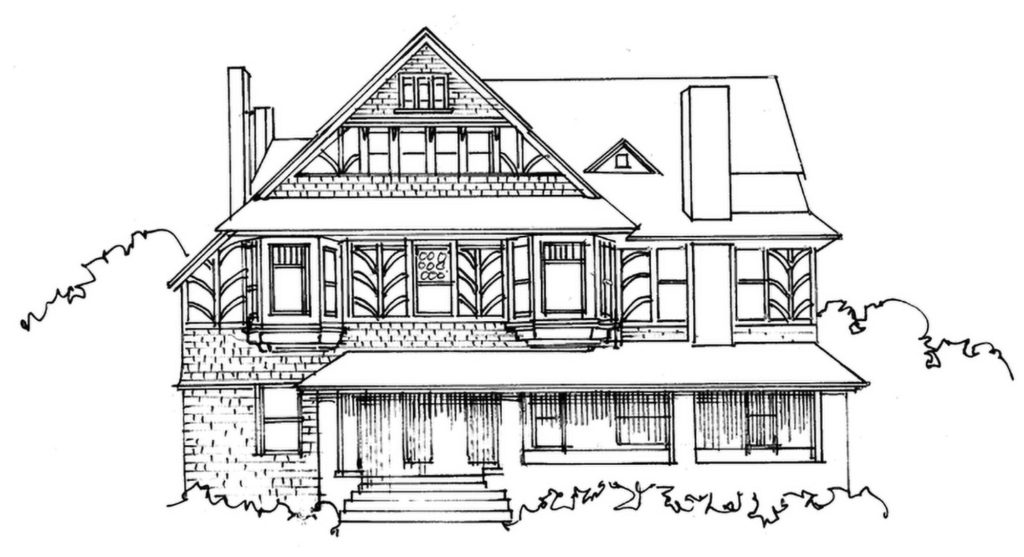 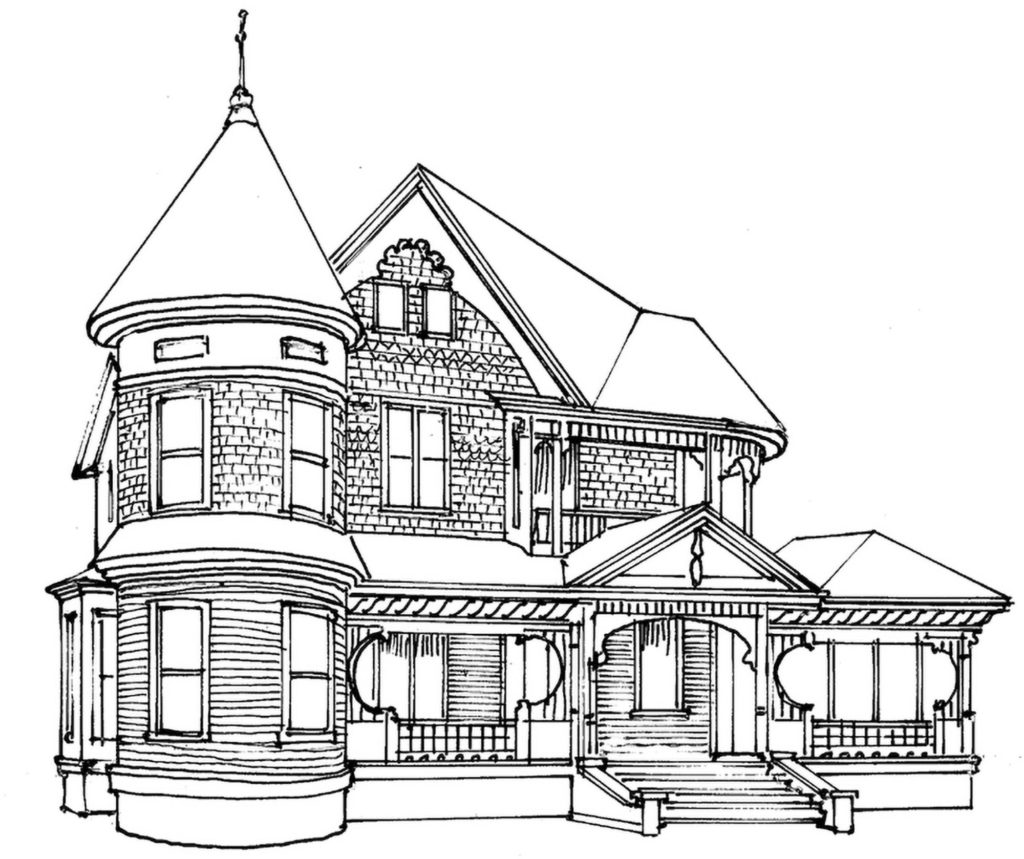 Derived from English design reform movements, the Queen Anne style itself hastened the end of High Victorian decorating—which had become heavy, lavish, and undiscriminating. Rooms were decidedly not overstuffed. In fact, tastemakers ridiculed 1860s parlors with their cabbage-rose carpets, florid mirror frames, and carved rosewood and marble furniture. The basic decoration of the Queen Anne house was Art, as in paintings and prints, pottery, embroidery, hand-made tiles, and art furniture—along with art wallpapers and painted decoration.

Besides the accessories of the East, American “Revolutionary” furniture was again prized. Rush and cane chairs mingled with wicker, rattan, and bamboo. Very popular was the so-called Eastlake style with incised, stylized ornament.This first wave of the Colonial Revival accepted neoclassical styles: Louis XVI, Hepplewhite, Sheraton. And country Empire was made regionally from the 1830s through the 1930s.