To be closer to family, Gwen Jones decided in 2007 to move to Portland, Oregon. And artist and craftsperson with knowledge of period design, Gwen had a pretty good idea of what she wanted: an old house, comfortable, not a fixer-upper, with room for her floorcloth-making business. (A floorcloth is heavy canvas, sized and stretched, filled and decoratively painted; also known as an oilcloth, it’s a precursor to linoleum.)

The 1916 house is a California-style semi-bungalow, with both Craftsman and Colonial Revival elements. The front boasts a deep porch, the back a sunroom.

After seeing 40 properties, she’d about given up—then came upon a Craftsman semi-bungalow (one and half storeys). Built for $2,000 for a railway conductor, it needed only gentle updating, having been nicely restored by previous owners, who’d also upgraded systems and the kitchen.

The 1916 semi-bungalow betrays the turn toward Colonial Revival sentiment, with French doors and painted trim found behind the traditional double-gable façade with its battered porch posts and exposed rafters. The house is attractively sited, set high and back from the street. Steps lead past a front garden to a porch with bold structural details. The 48-inch-wide front door, a Craftsman version of a French door with 12 lights, allows sunlight to stream into the living room that runs the width of the house. The dining room’s built-in buffet is still here, and, beyond the kitchen, a pleasant sunroom overlooks the backyard.

Gwen was captivated by such details as octagonal, opalescent milk-glass doorknobs. The large 1916 garage, she thought, would make the perfect studio. That’s where her work began: she insulated and drywalled the building, then laid a wooden floor. A salvaged 8′ x 4′ picture window came from the Rebuilding Center; now it overlooks the back garden.

In the main house, Gwen was able to begin decorating straight away, and started by freshening rooms with color. Vintage and reproduction lighting includes a cluster of early-20th-century, “Venetian” wrought-iron lanterns that hang in the sunroom.

The kitchen already had cherry cabinets with Arts & Crafts detailing and a farmhouse sink. Gwen created a floorcloth she based on a 1912 Arts & Crafts ceiling decoration; it’s colored tawny yellow and black granite with red accents, tying together the Cornsilk (Benjamin Moore) wall color and cherry cabinets. 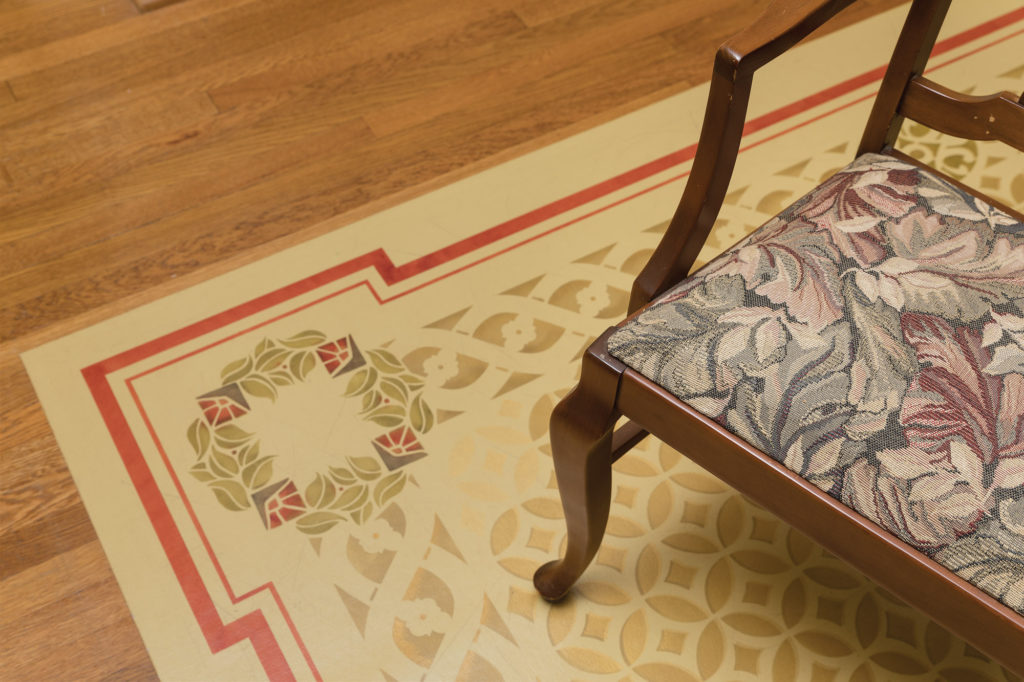 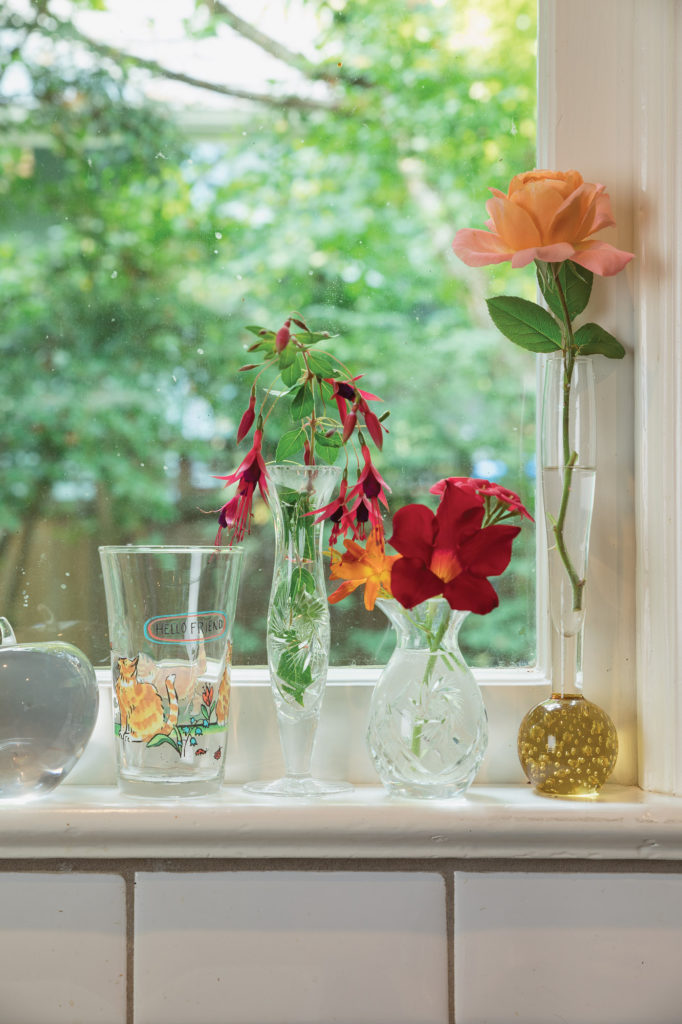 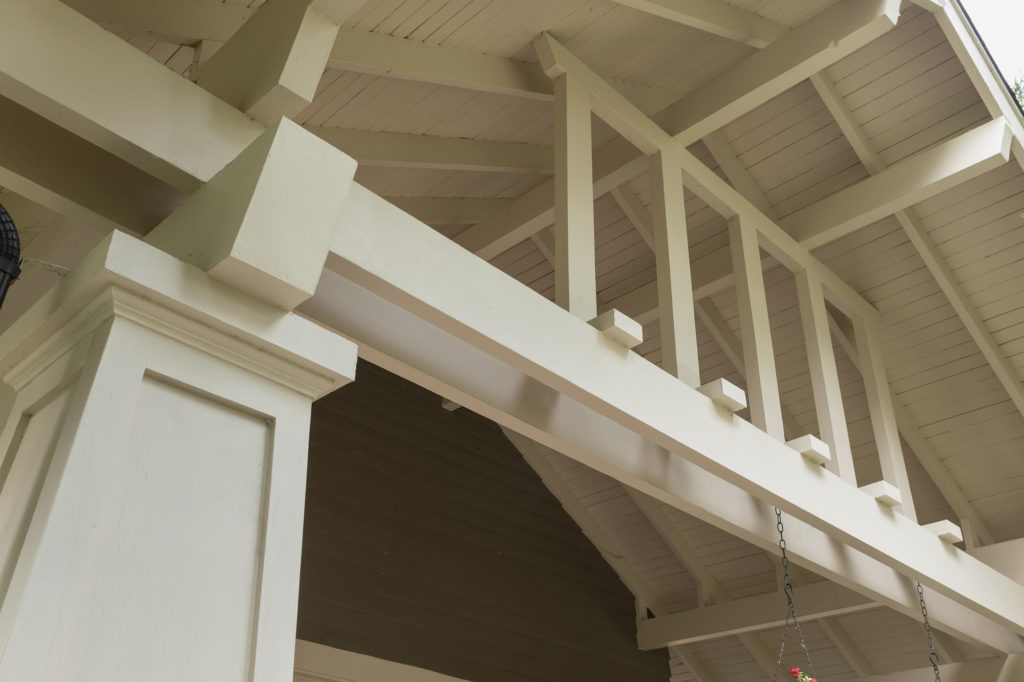 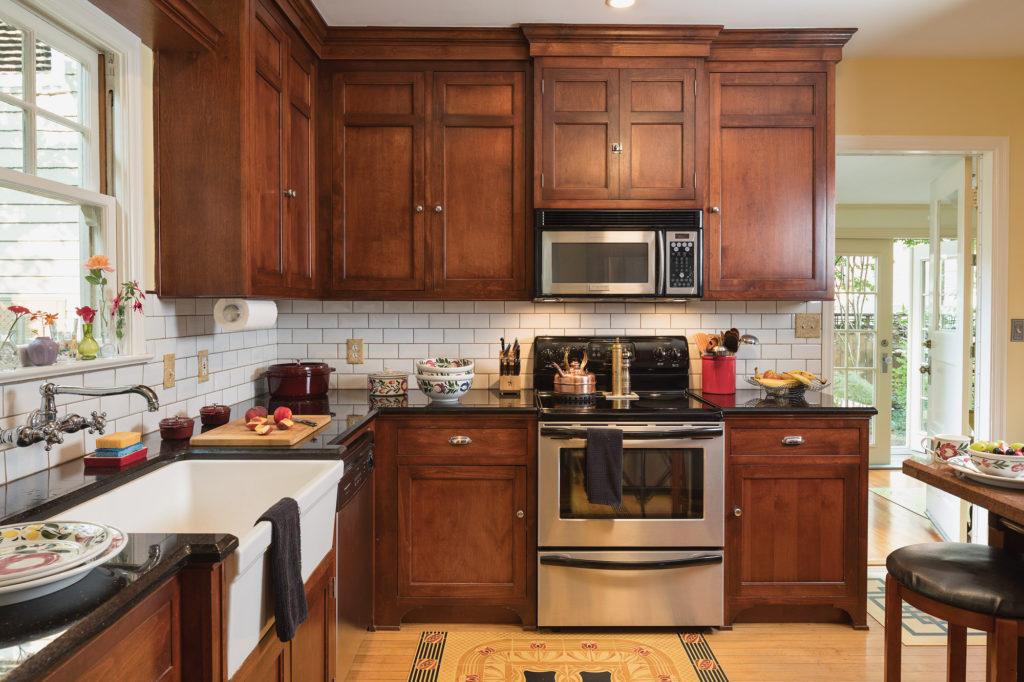 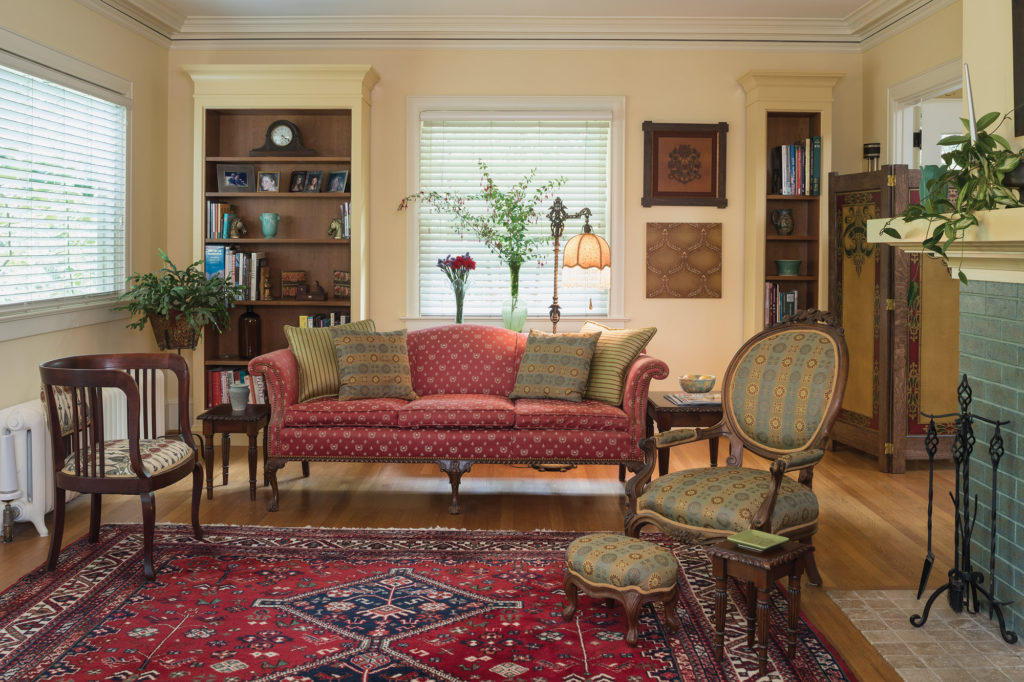 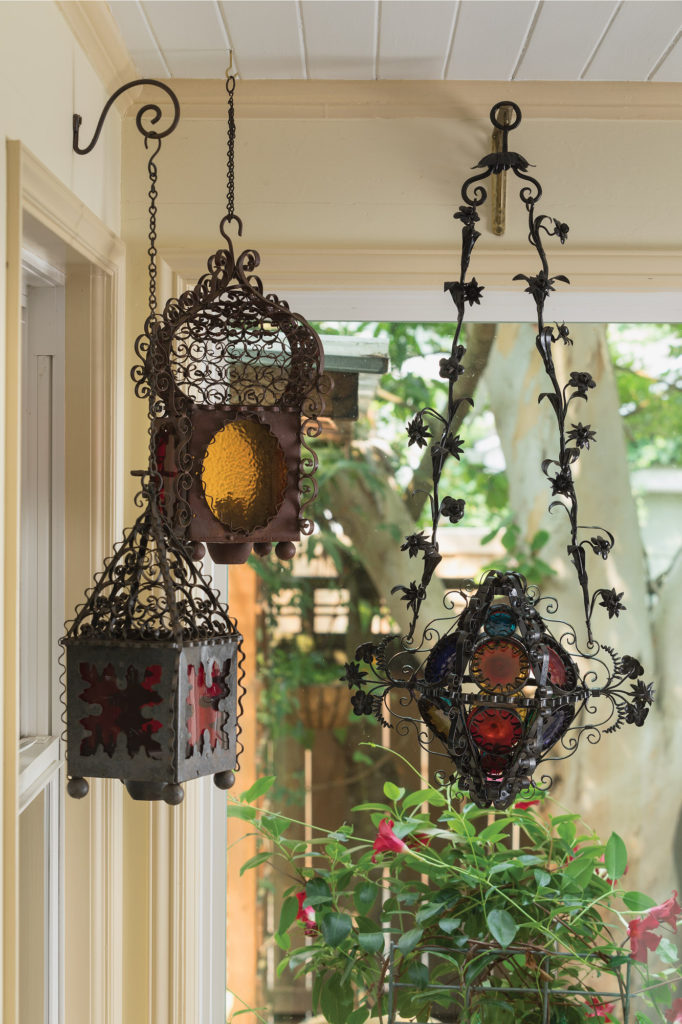 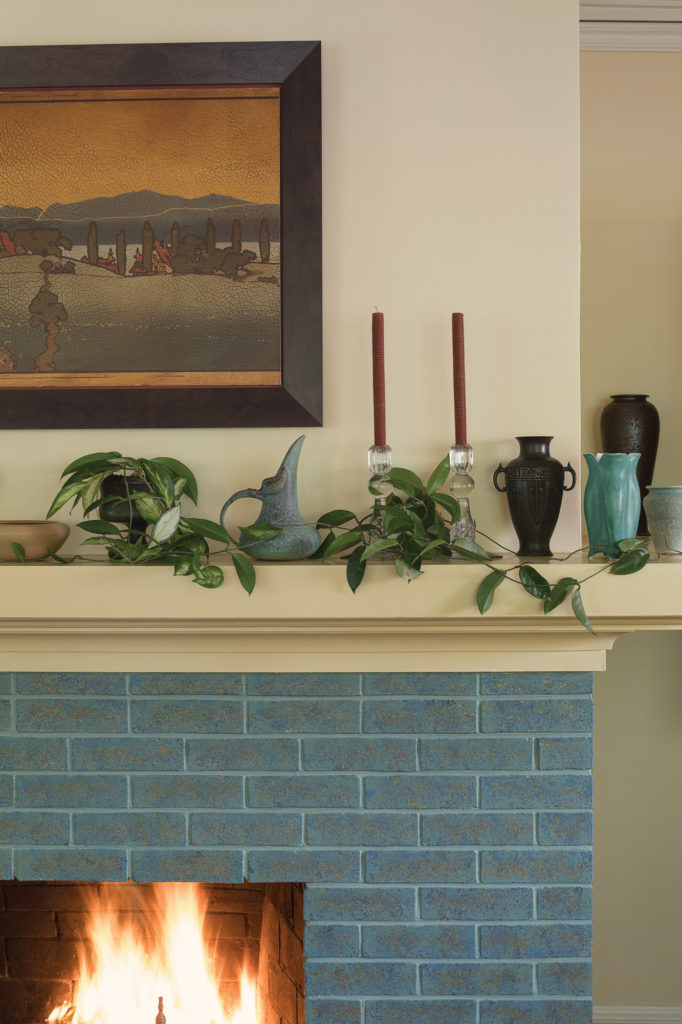 “I went on a three-month extravaganza of painting,” Gwen jokes, recoloring the living room in light-toned Hinoki from Sherwin–Williams. The original brick fireplace surround, which had been painted an unappealing tan color, was faux-finished in deep turquoise to reflect the ceramic glaze of a prized pot.

Saving the best for last, Gwen considered the dining room. Walls were painted gold-toned Walk on the Beach by Benjamin Moore, and the elaborate ceiling trim came to life with White Raisin by Sherwin–Williams. In the 10″-deep frieze area, Gwen stenciled a stylized pattern in micaceous gold with purple and green highlights. She based the design on Canton fairy bells (‘Night Heron’) that grow outside the window.

Getting The Colors Right

Gwen Jones repainted every room in the house to produce a warm, Craftsman-era sensibility. Her tips:

Especially if you have furnishings and textiles of the era, coordinate wall color with them for a balanced palette that ties the room together.

Strive for depth of color: Better-quality paints have more pigment for saturated, richer color. Gwen uses Benjamin Moore’s Color Stories/Aura paints as well as those from Farrow & Ball and Sherwin–Williams.

Don’t forget trim and ceiling. These often are painted white, considered “safe.” But white can be stark, especially with the wrong undertones. Soften or warm the color. Trim paint should have the same undertones (i.e., grey, beige, yellow, pink) as the dominant color. Ceilings may have a peach tone added, or a bit of the wall color may be added to ceiling-white for automatic compatibility.

Keep room-to-room flow in mind. In these semi-open houses, colors aren’t experienced in isolation. The palettes in adjoining rooms should play off each other, either as shades and tints of similar colors, as complements that have similar tone and value, or as analogous schemes.