In the late 1920s, Flint, Michigan, was the place to be. As the birthplace of General Motors, then a young company struggling to make automobiles fast enough to keep up with an unprecedented demand, the city of Flint was enjoying a remarkable boom. Jobs were plentiful, so much so that across the South and Midwest, people began leaving their struggling farms and migrating to Flint to vie for the promising and lucrative future a career in auto manufacturing could bring.

Meanwhile, the executives running GM were building lavish, refined homes worthy of their newfound success. In 1930, Edward T. Strong, the president of GM’s Buick division, built one such home. Constructed entirely of smooth-cut limestone with a red clay tile roof, and boasting more than 6,000 square feet (despite the Great Depression), the Mediterranean Revival house was designed by architect Joseph M. Savage to resemble the Montague house in Verona, Italy. Savage included romantic European flourishes like a Juliet balcony, an oriel window, and a crenellated tower, and he placed a stone fountain and reflecting pool in the garden.

Strong was a horseman, so the adjoining 5,000-square-foot carriage house contained a four-stall stable on its first floor beneath the staff apartments. Even the horses’ living quarters were upscale—their stalls were crafted of fine mahogany, with several 8′-long-radiators installed on the walls to ensure that the animals remained comfortable in the frigid Michigan winters. The home was so stunning that it was soon being used as the backdrop for many of Buick’s national advertisements.

But by the time Mike Sanders and Tom Williams purchased the house in 2003, it had endured decades of slow decline. The roof had been leaking for years, which resulted in extensive plaster damage, and the once-lovely garden ran rampantly out of control. “It was so overgrown, we couldn’t see the front door!” says Tom. And while the house came with a pedigreed history, its long list of problems made many potential buyers run in the other direction. “Everyone wanted to see this house, but nobody wanted to touch it,” says Mike. Undaunted, the veteran restorers purchased the home and set to work.

Because they moved in during the winter, their first priority—repairing the failing roof—had to wait until spring. That gave Mike, an engineer, time to do some research. He started by identifying the tiles’ manufacturer—Ludowici—then getting on the phone with the company. They were a wealth of information. “When I told him the age of the house and where we lived, he said, ‘Oh yeah, you’re right on schedule.’” The employee explained that many of the tiles were probably fine, but the infrastructure—nails and flashings—was at the end of its lifespan, and needed to be replaced. When Mike asked about where to find tiles similar to ones that were broken, missing, or patched sloppily with a pot of tar, he learned that Ludowici has a stock of vintage tiles. “A week later, a box of different salvage tiles arrived,” says Mike. One of them was a perfect match. 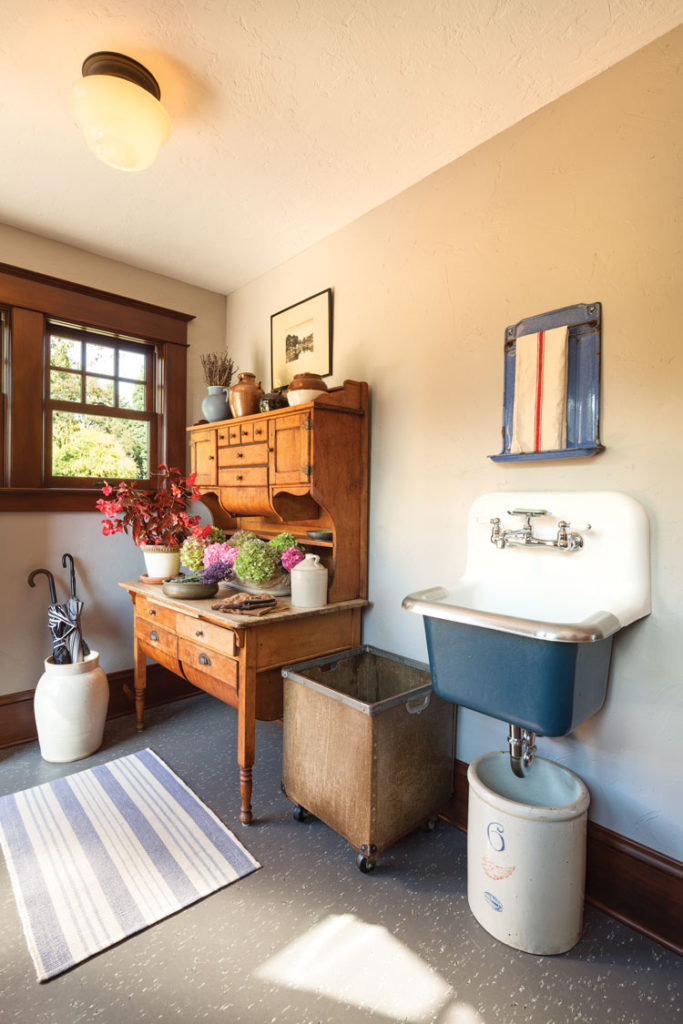 The materials problem solved, Mike set about finding someone who could remove the existing roof, install new copper underlayment, and put the tiles back on. He soon hit a roadblock. “I called several local roofers. All said they could do a spot repair on clay tile, but not the whole roof.” Discussing this conundrum with an architect friend, Mike was directed to Mike Morrison, a general contractor who used to live in Arizona, where cement tile roofs—installed in much the same way—are common. Morrison was certain he could do the job, and when he came over to check out the roof, he ended up getting an extensive tour of the house. As he walked through, Mike and Tom pointed out all of the projects they had already mapped out. At each one, Morrison stated that he could do that, too. So Mike and Tom decided to give him a try, starting first with a small project on some puzzling doors in the basement.

The thick wooden doors lay on the floor, their elaborate hinges completely shot. “The hinges were all locked up, and the doors had gotten a little roughed up from being forced,” explains Mike. Morrison told them the hinges were manufactured by a company named Soss, which was still in business. In no time, he had the doors repaired and hanging in their proper place—fronting a Prohibition-era bar that’s completely hidden behind bookcases when the doors are closed.

From there, work moved to the kitchen, a space outfitted in the 1950s with pink appliances. “We knew we wanted simple vintage cabinets, with ship’s-lock catches on the doors,” says Tom, who even had a photograph of an era butler’s pantry he aimed to re-create where the original one had since morphed into a tiki bar. Morrison crafted a new pantry that’s a doppelgänger for Tom’s photo, along with new period-inspired cabinet fronts for the existing solid base frames throughout the kitchen.

Mike and Tom decided to move the refrigerator back to its original place on a wall beside the maid’s stairway. When they pulled the old fridge out of the alcove it was nestled in, they found a surprise: A stripe of the beige tile around the kitchen walls here was a salmon pink. A closer look revealed that the main room’s accent tiles had been judiciously painted over. “We used paint stripper to take off the beige,” says Tom.

Also hidden in the alcove was a ceiling vent, which Tom and Mike realized was for the original stove, so they decided this was the place to put their range. The 1950s pink dishwasher they removed went via eBay to a couple in Palm Springs who’d spent years searching for one to complete their mid-century restoration. Tom and Mike also removed the worn ’50s-era flooring and installed new linoleum in a pattern that copied the original rubber flooring in the adjacent maid’s hall.

Another major flooring project involved uncovering the striking original floor tiles throughout the expansive entryway and breakfast room, which had been carpeted over in the 1950s, in some areas via carpet strips glued directly to them. The distinctive tiles, part of the home’s bounty of Flint Faience tiles, were manufactured in a spark plug factory. After attempts to loosen the tack-strip glue with several different solvents failed, Mike resorted to carefully chipping away at it with a hammer and chisel, and sometimes a razor blade, too. “Every night I’d remove about three or four inches of tack strip,” he says.

By the time spring rolled around, the house was looking much more like its old self, and it was time to turn attention to the landscape. Tom hacked away at the jungle for weeks to get it under control. “It was really nice to get rid of the overgrowth and show off the details of the house,” he says. Meanwhile, Mike used heat to thoroughly strip the paint off of the cypress garage doors. “The paint was something like half an inch thick,” he says.

Morrison and his crew worked diligently on the roof nearly the entire summer. “They would do one section at a time, building shelves of wood to stack the tiles on until they could reinstall them,” says Mike. The technique spared the crew the work of having to move all of the heavy tiles down to the ground, then back up again. As they finished, all the neighbors with original clay roofs on their houses flocked to Morrison for repairs as well.

Next, Mike brought in a master plasterer who cut out the damaged areas and repaired the ceilings, including an elaborate panelized treatment in the sunroom. Other projects included replacing the original 2-million-BTU boiler (a job that required a crane to hoist the old unit, in pieces, out of the basement), adding a small-duct air conditioning system, reglazing the original Crittal windows, and building custom interior wood storms to help offset heating costs. Mike designed the storms after an original he’d seen on another grand house in town, modifying the design to include an invisible bullet catch and hidden rubber weatherstripping for a better seal. Morrison measured and built the frames, and set in the glass. Mike and Tom did all the glazing, priming, and painting or staining (the finish varies by room).

Mike and Tom’s extensive research and meticulous restoration led to the house being listed as a local historic landmark. But despite all these accomplishments, Mike might be most proud of this one: He was able, after much detective work and a few cold calls, to locate the daughter of the architect, who was then in her 80s.

Denise Savage visited Flint and toured the house—which she’d last seen as a 6-year-old during its construction—shortly after its restoration was complete. She was very proud of her father’s work, and to see it living on.