“We wanted something a little neglected, but not changed,” Rosemarie Padovano says of the old-house search she undertook with Marcello Marvelli. The couple had no interest in taking on a complete restoration, nor did they relish unraveling work “done by somebody who had too much money and too little taste,” as Marcello puts it. The two had discovered Old Lyme, Connecticut, when they spent time on their sailboat in Stonington Harbor nearby. Beginning to tire of city life in Brooklyn, they began a search for an artistic old house.

Rosemarie Padovano is a sculptor and interior designer. Marcello Marvelli is an antiques dealer and art historian with a Ph.D. in Medieval and Renaissance art from the University of Florence in his native Italy. Aesthetics were important. It took two years, but finally they found a 1755 Colonial-era house in Old Lyme. Home to generations of the Wade family until 1922, the Wade–Tinker house had never been altered in any significant way. It was structurally sound, so the couple could spend their creativity, hard work, and money on light renovating and furnishing.

They were thoughtful about the process; as experienced designers, they know full well what adds value and what does not. “When I work with clients, half of my job is advising on what we can do, aesthetically or functionally, to help them to enjoy their house more,” Rosemarie says. The kitchen in this house is a case in point. Rather than gutting it or even buying new cabinets, the couple added a fresh coat of paint, and swapped out 20th-century chrome hardware and faucets for unlacquered brass that would acquire a patina. An unattractive island that had taken up most of the room was “decommissioned with a sledgehammer” and replaced with an antique worktable bought at a country auction. They painted the pine floor white and stenciled it in a diamond pattern. 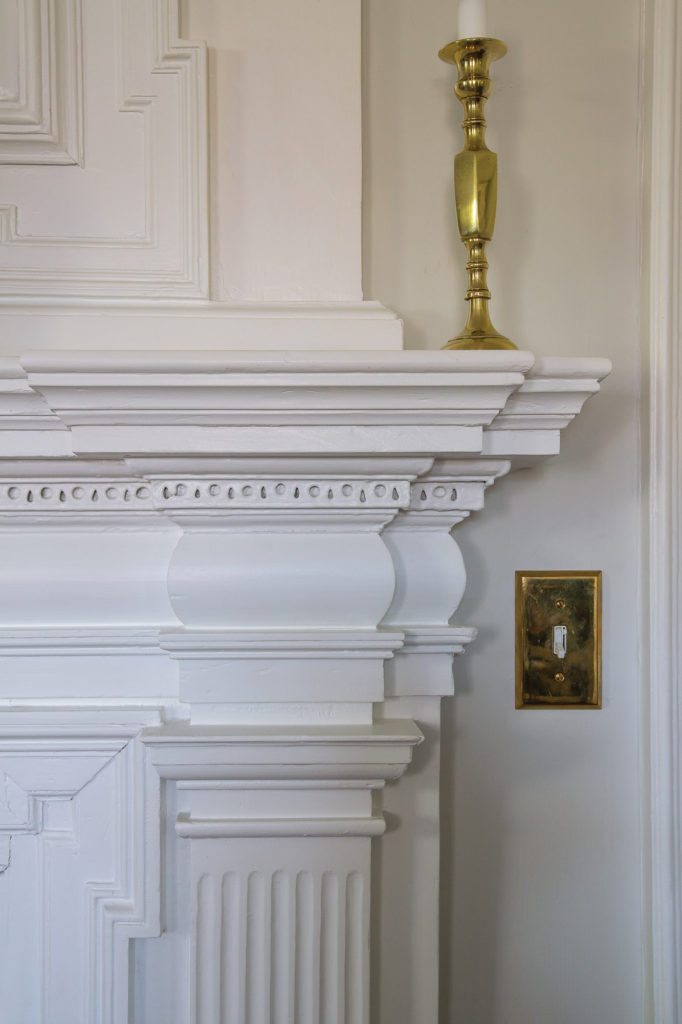 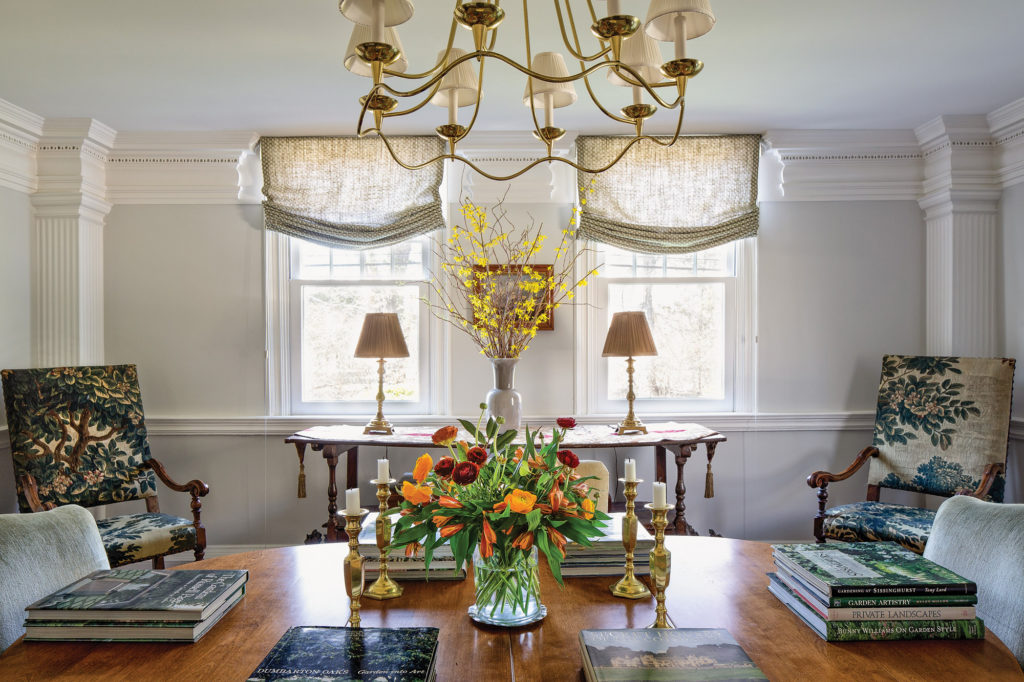 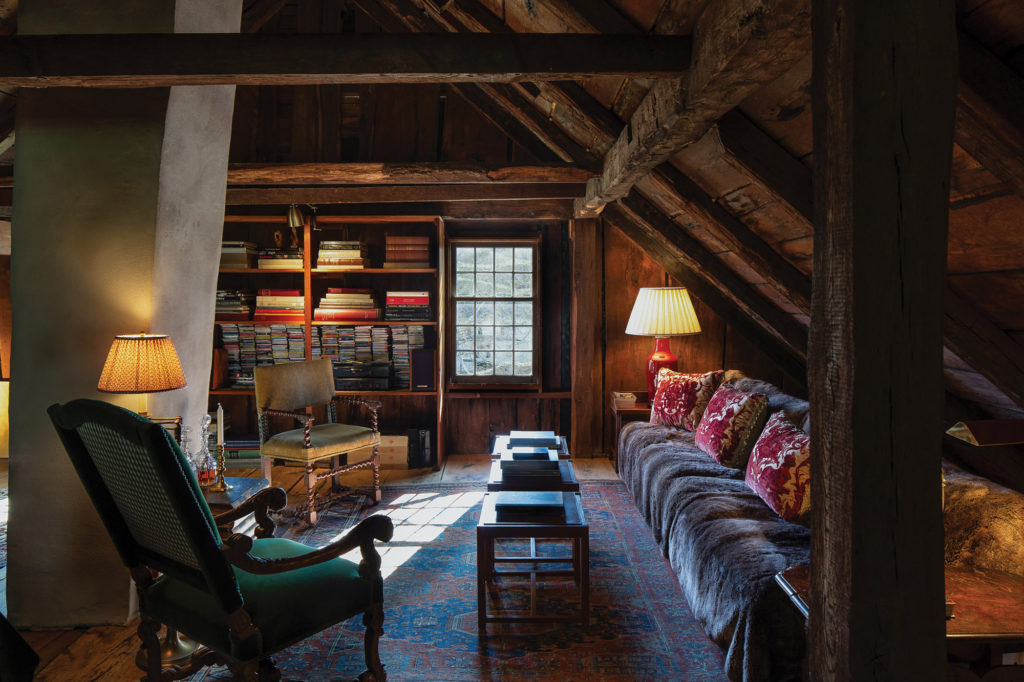 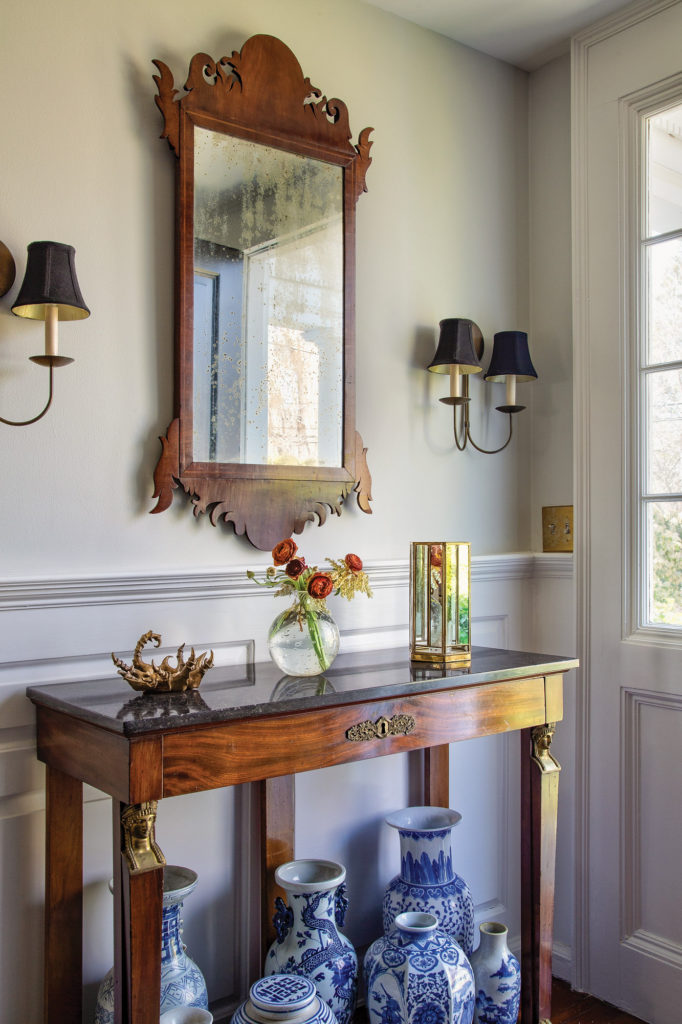 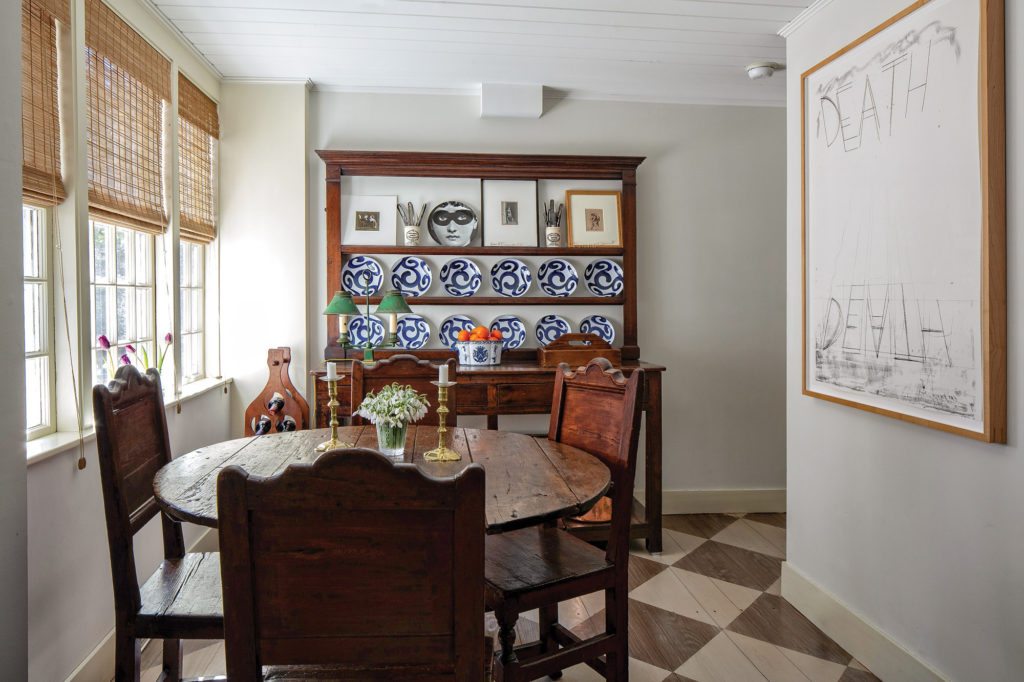 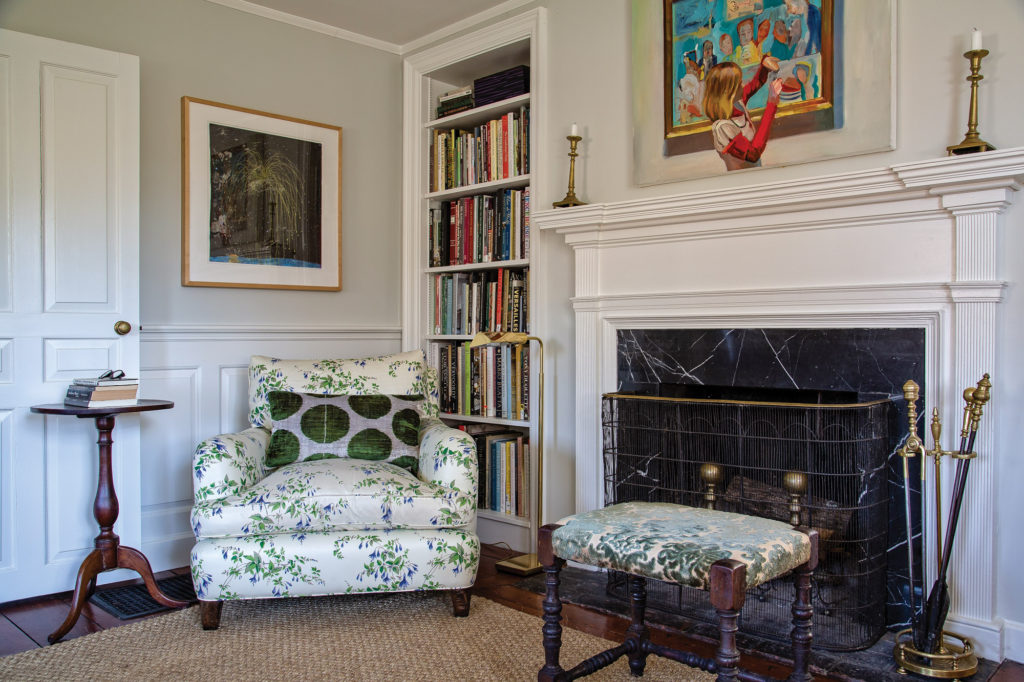 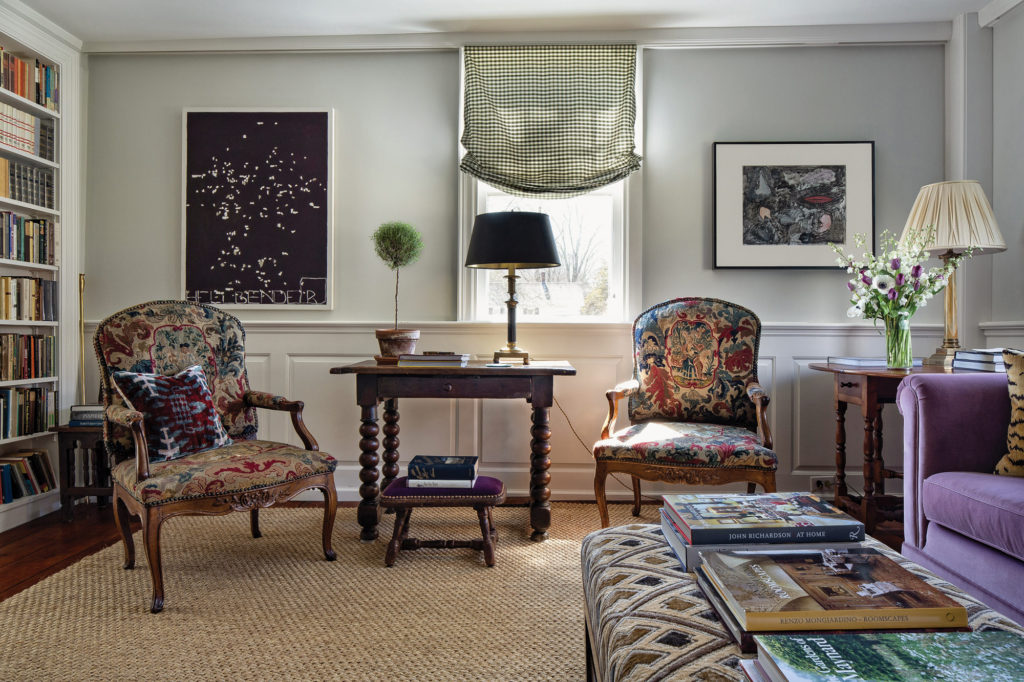 “We changed countertops to end grain-maple butcher block, put in new lighting, and painted the wood ceiling white,” said Marcello. “We only use natural materials—that’s the main parameter. There is no plastic anywhere in the house or garden, nothing synthetic.”

That includes upholstery, fabrics, and rugs, all of which are wool, cotton, or silk. Rosemarie holds a master’s degree in sculpture as well as a BFA from Parsons School of Design; she found her passion, though, in textiles. The couple own Artemisia, an interior-design studio and shop in Old Lyme, where they sell handcrafted pillows, home elements, and antique furniture they have collected or designed. In their own house, they don’t try to “match” everything. On the contrary, they like to mix different periods. Their furniture, artwork, and accessories blend the contemporary with the classic, what’s subtle with what’s edgy.

Most of the investment of time and money was spent on the interior, and the exterior paint job—which took five men two months to prep. In the attic they found “an electrical nightmare” that required a complete update, with wiring relocated beneath floorboards. In the living and dining rooms, hand-carved fireplace mantels were heat-stripped down to bare wood and then painted, as was the paneling in the entry hall, and all the doors and mouldings.

“You could no longer see details in the wood because there were so many coats of paint,” Rosemarie says. “Our goal was to take the dingy out of the house, to create the feeling of a Colonial museum. We made everything a bit fresher and more refined.”

In an upstairs bathroom, the couple replaced glass tile with simple white tile, traded a “horrible” mirror for an 18th-century Chippendale piece, and changed hardware from chrome to unlacquered brass. So “it’s a different room even though we didn’t replace sink or shower. It cost us $1,000 instead of $10,000,” says Marcello.

Windows were meticulously reglazed, but it was worth it. “Most people don’t want to go through [that process] … but if you modernize, you start to lose the old house until there’s nothing left,” says Rosemarie. “We couldn’t live in an 18th-century house with replacement windows.”

While they are true to original elements, Padovano and Marvelli did not seek to re-create an 18th-century domicile. “This house has had a life; owners have made changes. We learned, from the restoration of paintings, that you don’t necessarily try to bring a painting back to when it was painted. Instead, you take into consideration the passage of time,” Marcello explains. “Some changes here date to the 19th century, and we respect that history.”

Exquisite woodwork survives in main rooms, including wainscots and mantels. Tradition finds a balance with contemporary art; the painting over the living-room mantel is by artist Juliana Romano.

These homeowners moved in during the winter. Come spring, they were pleasantly surprised to find they had a formal garden—an Olmsted Brothers-designed garden that had been commissioned almost a hundred years earlier by the artists–owners of the house during the 1920s.

The garden had been terribly neglected. It was so overgrown, Rosemarie Padovano and Marcello Marvelli had to remove three 30-yard containers of debris, just to get started. Marvelli has since become a dedicated gardener.

“When you inherit a garden like this, you have to do it justice,” Rosemarie says. Rock walls were rebuilt, the lawn reseeded, encroaching wooded areas were pushed back, brambles were extracted, and a pool re-dug. They employed the help of Clive Lodge, a distinguished garden designer. They used bluestone around the pool and retrimmed the boxwoods surrounding it. Then they properly manicured trees and shrubbery, back to the way it looked a century ago. 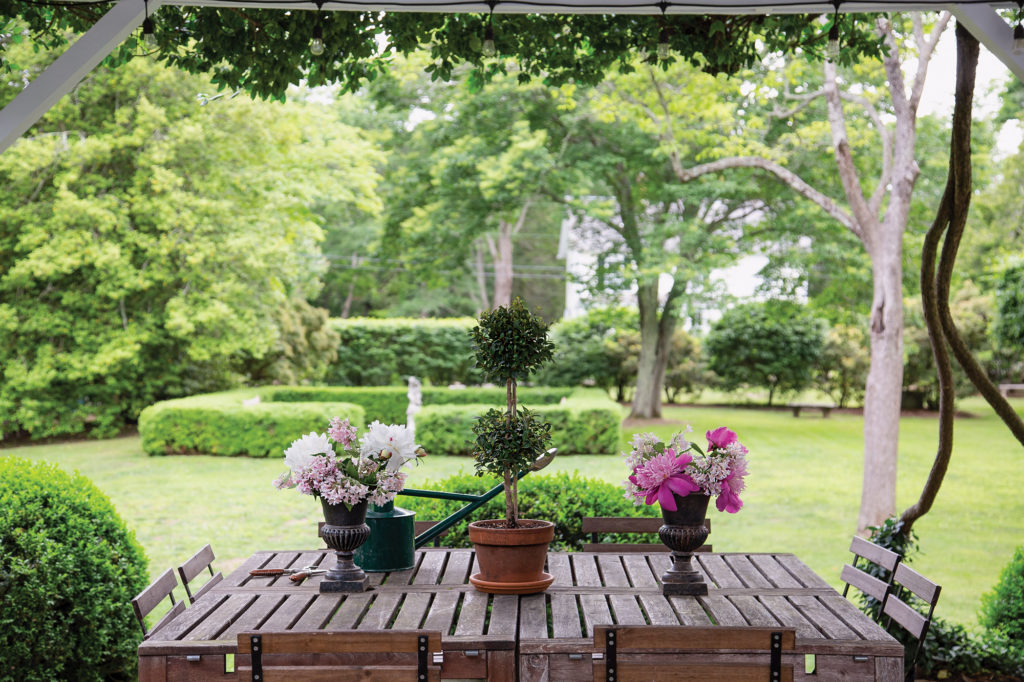 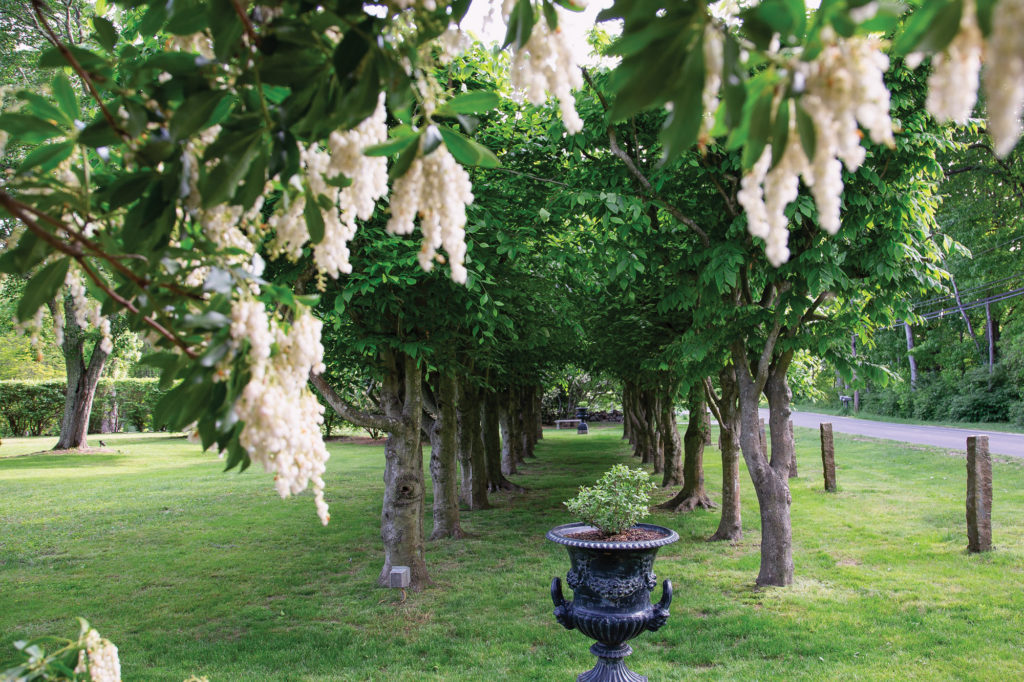 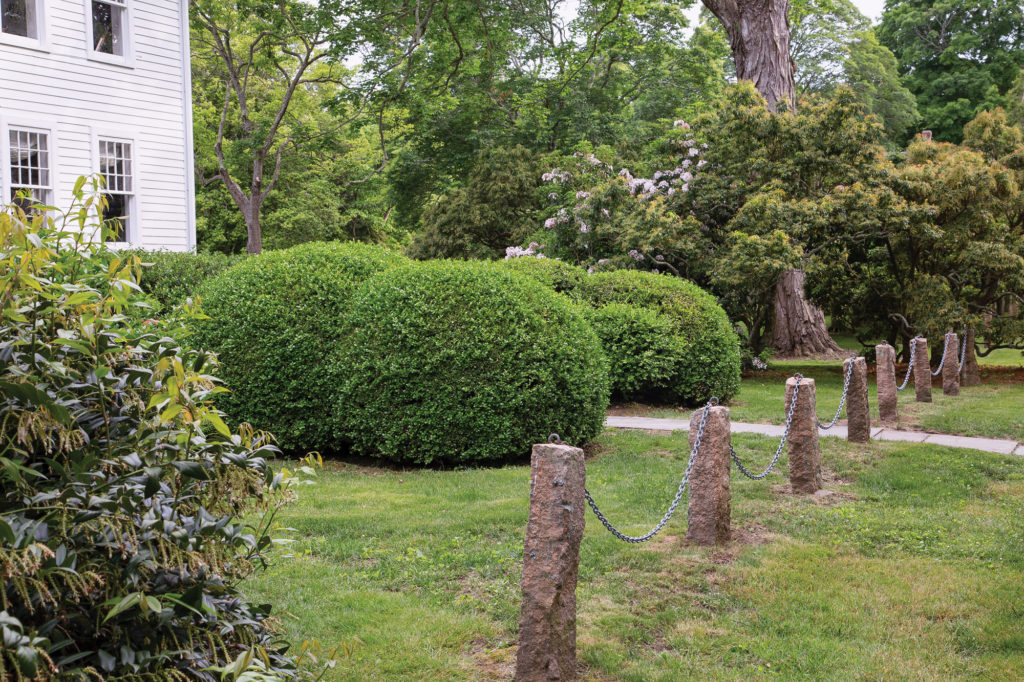 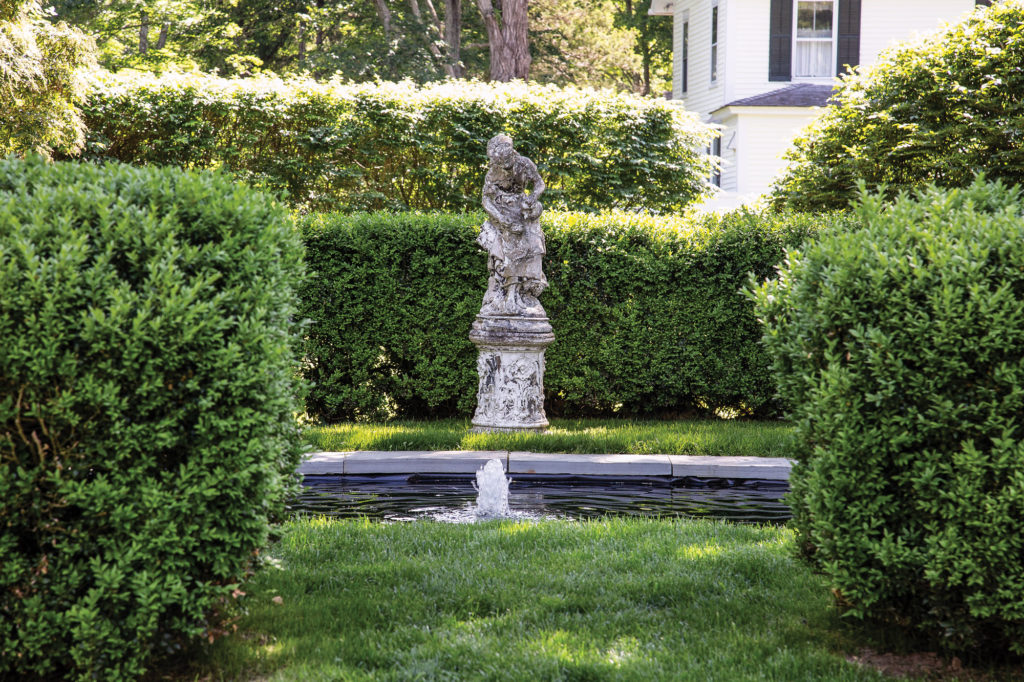 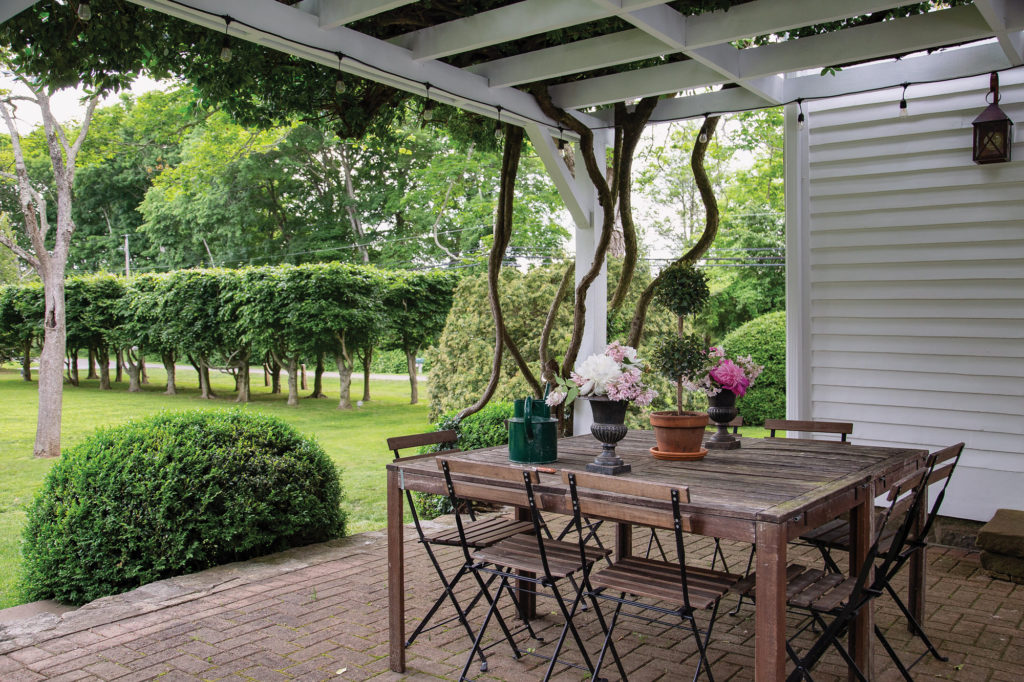 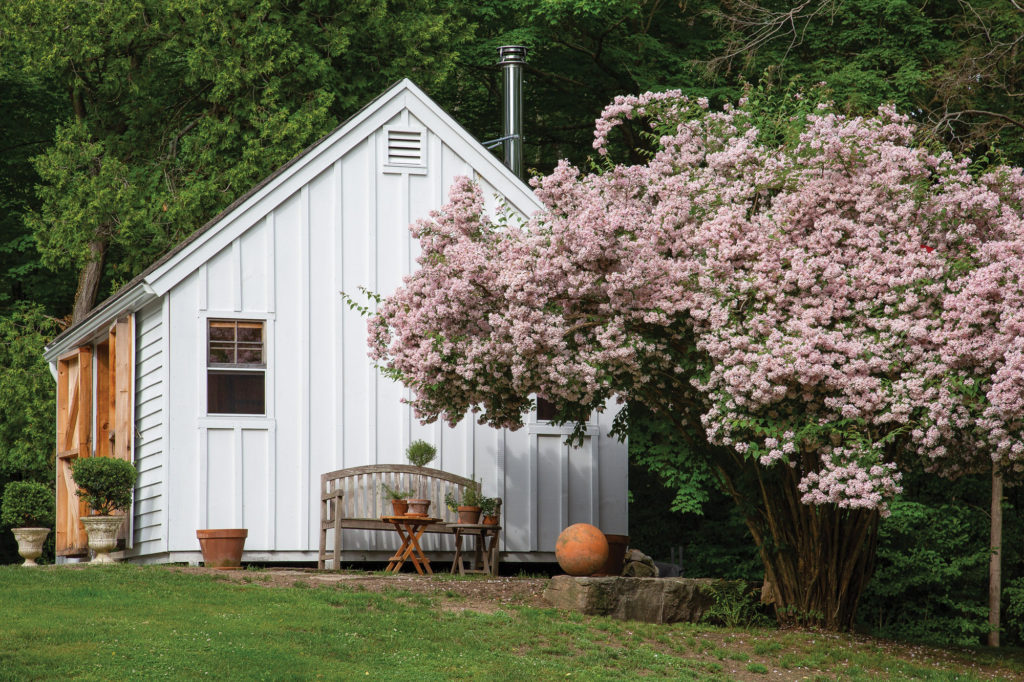 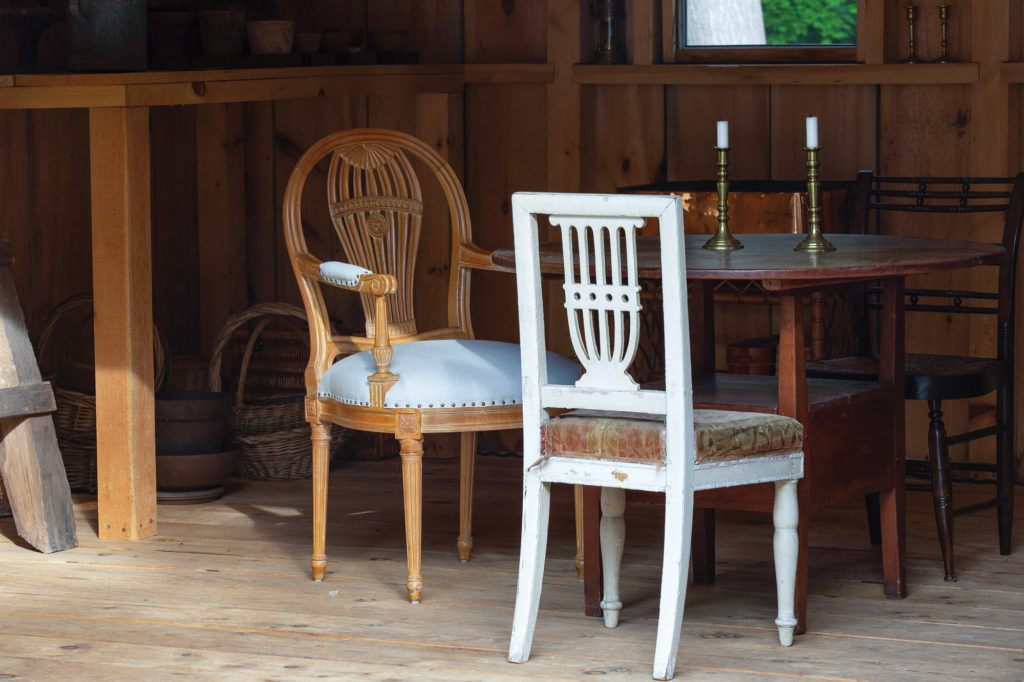 “Now it’s a very beautiful place to be,” explains Marcello. “Because of the history and age of the plants, we feel a lot of respect for the garden—we didn’t want to make it cutesy or suburban, and we want to keep it healthy. A lot of responsibility comes with that.”—C.B. Davis