Little escapes the careful watch of Drogo, the resident llama, as he oversees a flock of Corriedale sheep and lamb. The next car to crunch past his pasture along the steep gravel driveway will surely belong to either Marek Ulicny or his partner, Dan Rice, and will undoubtedly bear treasures extracted from barn sales, salvage centers, or junkyards.

Both schoolteachers by day, the two work in tandem to re-create the past at their circa-1909 bungalow, located on a 16-acre farm on Michigan’s Grand Traverse Bay. Although they share the same ultimate vision, Marek taps his construction roots to manage the project. Dan works alongside, wielding another critical role: “I reel him in when necessary,” he laughs—like if the hammering and hauling reaches past midnight, or if Marek decides he wants to add a third floor over the weekend.

After renovating other homes, mostly from the 1970s, Marek was ready for something older. The two went to see an old cherry farm in Omena, Michigan, named Windy Knob Orchards. For sale was a Craftsman bungalow with accompanying barn, paddocks, migrant housing, and a little stone pump house. The area is famous for rolling hills, cherries, and stunning views of both Lake Michigan and Grand Traverse Bay; this perch has all three.

Eyeing the home’s faded vinyl siding, rotting windows, and woodpecker-drilled cedar shake, the pair knew they had found their next project. “We like things we feel we have a connection to—something that tells a story, or has some originality,” notes Marek. Fueled by a passion to restore the house’s classic Craftsman lines, Marek and Dan commenced renovation and, in the process, uncovered multiple mysteries. 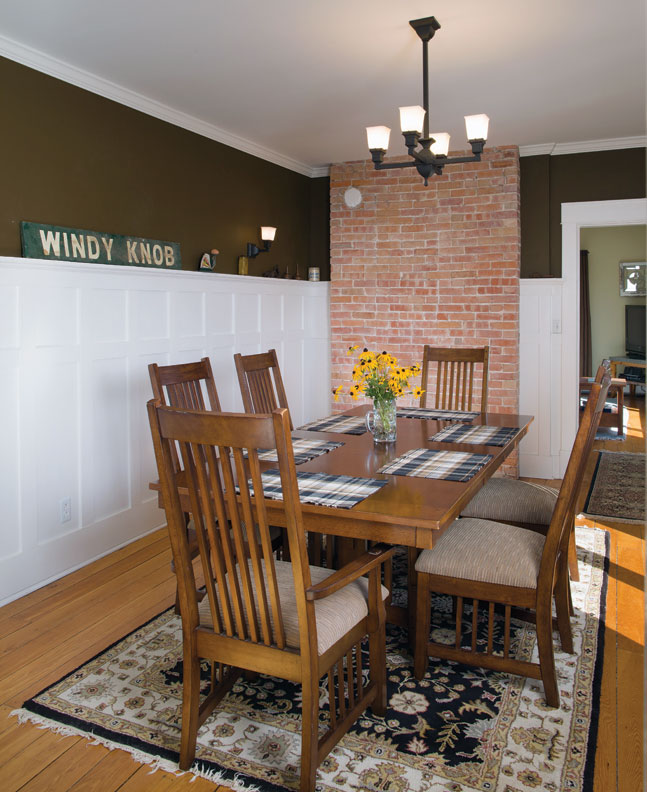 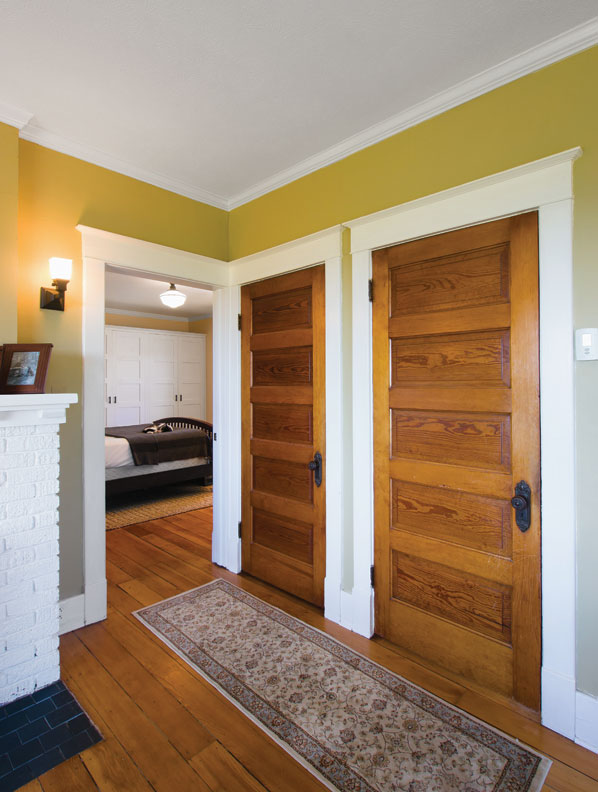 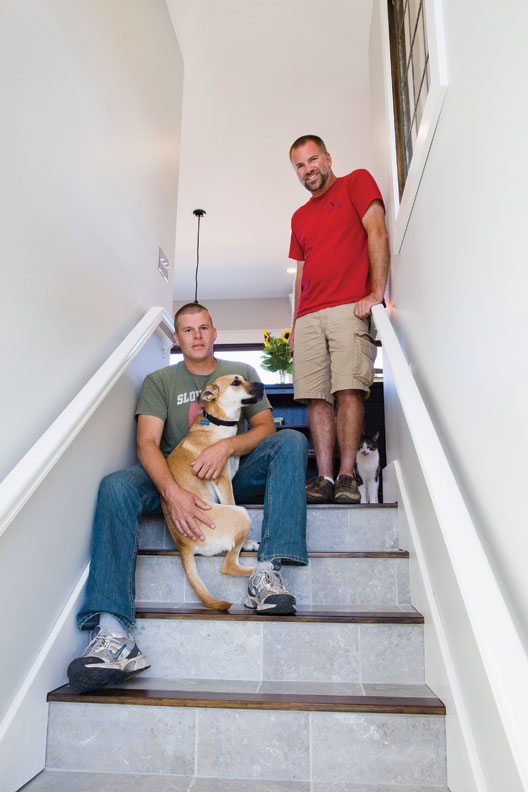 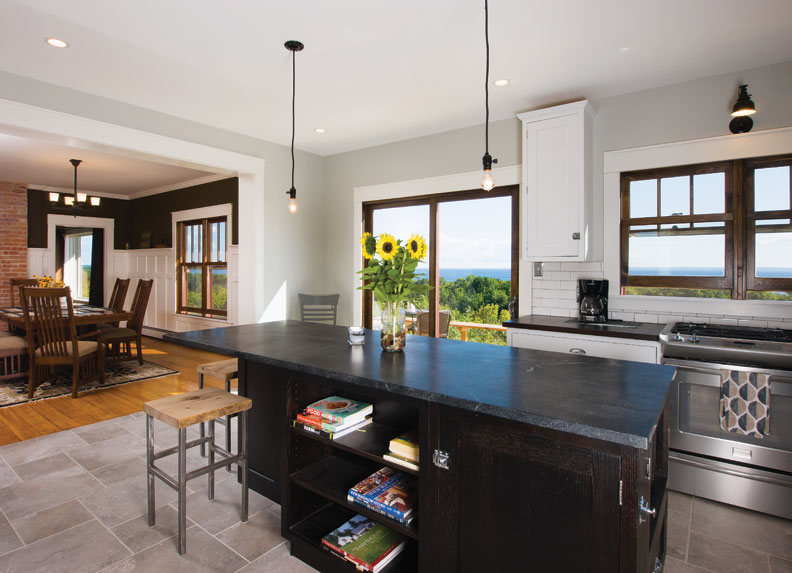 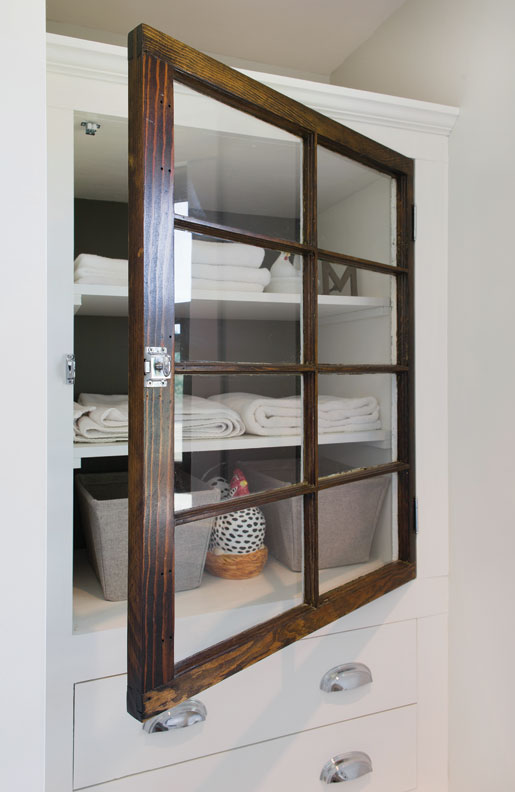 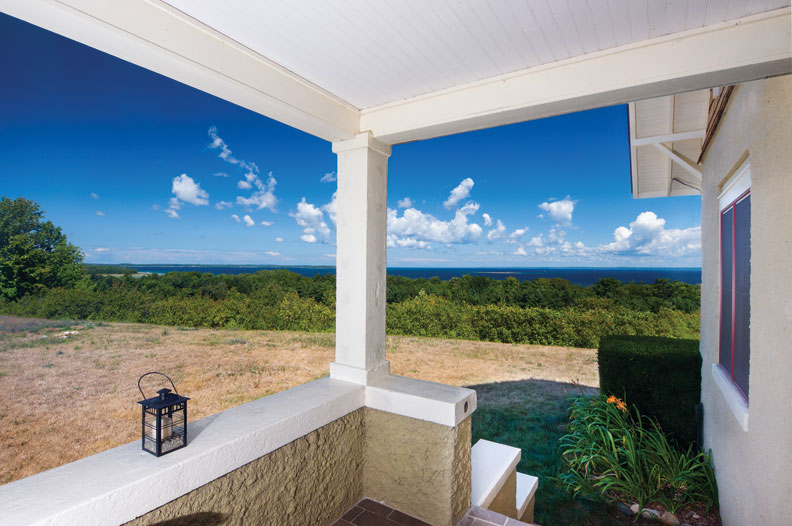 To start, the entire 2,050-square-foot bungalow had been “wrapped” in 4″ of concrete. Marek discovered that the first owners, the Laeffler family, had once been the victims of a tornado in Indiana—although tornadoes don’t typically descend on northern Michigan, they weren’t taking any chances. Marek and Dan decided to keep the unusual concrete wrap and its inherent weather insurance.

Second, as a result of conflicting records, they’re still uncertain as to exactly when the bungalow was built. Tax documents state the house was constructed in 1909, while the MLS listing—and local lore—claim the house was built in 1935.

The two worked from the outside in to restore the house. They installed new cedar shake in the gables, repaired the exposed supports, and fixed the first-level stucco. The windows, which were not original, were replaced one by one as finances allowed. “We had a historical photo [from a previous owner] that showed the original windows and their divided-light pattern on the top sash,” says Marek. “In fact, one original exterior window remained under the addition, and it, too, gave us the inspiration for the divided light pattern.” The pair found wooden Marvin double-hungs to match the original windows.

As Marek and Dan began pulling and prying their way through every room of their bungalow, more surprises emerged. Behind broken plaster in the master bedroom, they found a faded photograph wedged in the wall. It was a picture of a well-dressed man seemingly from the 1940s. The pair showed the photograph to neighbors and to previous owners, but couldn’t find an identity for this mystery man. Dan re-created a pop art version of the photo, which today is on display in the master bedroom, near where the photograph was unearthed.

Most walls were so damaged that they were brought back to the studs, insulated, and re-plastered. “It’s always a gamble,” says Marek. “Like pulling plaster off the interior chimney. I was pretty sure there was brick back there—and that it would look good—but I had no idea for sure. It turned out great.”

After chipping away 70 years’ worth of floor coverings (carpet, linoleum, wood subfloor, glued 9×9 tiles, and glued felt paper), they were thrilled to discover 5″ heartwood pine planks. “The floors being original to the house was very important to us,” says Marek. “It was tons of work to restore them. We used a wallpaper steamer to peel back layers, one square foot at a time.” There are still gaps and cracks in some floorboards, but, says Marek, “It’s perfect to think back on how many people have walked across these very same floors.” More planks were found in a crawlspace; they were used for the upstairs bathroom floor, where boards were missing. They restored all of the flooring to its original honey-hued glory, and sealed it with bowling alley lacquer—not even their enormous Great Dane can dull the shine.

Removing the rotted windows of a west-facing room, Marek discovered that the room had originally been a porch; its cement base and stucco sides remained intact. He removed layers of soggy drywall, rotted 2×4 walls, and severely rotted windows. At last, he uncovered the original beadboard ceiling, which had sat for years behind cardboard ceiling tiles. This, too, they painstakingly repaired and brought back to life. Dan and Marek later learned through neighbors that this porch once housed the original owner’s loom (an uncanny coincidence, given the pair’s hobby of raising Corriedale sheep).

Miraculously, all of the interior’s five-panel pine doors remained unpainted. Their ornate hardware remains a mystery, however, since it seems more suited to a city manor house than a simple country bungalow. In addition to restoring and repairing the existing Victorian doorknobs and escutcheons, Marek and Dan have hunted for missing pieces—a search that frequently results in new treasures for the house, like the old wrought iron factory window they installed in the back stairwell, or the antique dresser they converted into a sink cabinet for the upstairs bathroom.

Many prominent architectural details are salvaged items. A transom window in the master bathroom (from an old Detroit home) and frosted glass paneled doors (from a barn sale) both serve to illuminate the small main-level bathroom. The bathroom’s glass-paned cabinet door was originally from Dan’s family home, which was rebuilt. “Dan’s father saved many of the windows, carrying them from house to house for years,” says Marek. “Who knew we’d end up using one for a cabinet door? But it’s great—it’s old, has character, and the connection to where it’s from is even better.”

Dan and Marek also were able to salvage items from their own property to use in the restoration. Heavy faux beams installed at some point in the living and dining rooms were removed and reimagined as hay feeders for the livestock. Wood discovered in the barn was planed and reborn as door casing. The new kitchen stools were crafted from barn rafters, and the original, deeply weathered Windy Knob Orchard sign sits in a place of prominence along the dining room’s chair rail for all to see.

Initially, a cheap bookshelf served as bathroom storage, but then the pair discovered a beat-up medicine cabinet in an old tobacco farm during a trip to North Carolina. “No way,” said Dan. “Trust me,” said Marek. After a few days with paint stripper and a metal grinder, it now adds an era-perfect finishing touch—and highly desired hidden storage.

The dentil molding found along the mantel and built-in dresser, as well as the strong, simple door and window moldings, are evidence of both the Craftsman style and the owners’ preference. “We are huge fans of clean, straight lines: Craftsman style, classic farmhouses, bungalows,” explains Marek. “They all have details of craftsmanship without details just for the sake of details.” The pair’s discerning taste, matched with their passion for the past, has created a truly unique bungalow, built to withstand another century or more—and perhaps even a few natural disasters.

Online Exclusive: Share your most creative salvage projects in our special forum.