Rockford, Illinois—the state’s third largest city—has seen better days. Once touted by Life magazine as highly livable and as “nearly typical as any city can be,” it has since endured the collapse of its manufacturing economy and the myriad social ills that follow. As lifelong resident Gary Carlson observes, “It really was a beautiful city, but at some point we lost our way. The best assets we have now are the wonderful old buildings.”

An active participant in local preservation efforts since the 1970s and a big believer in preservation as a revitalization tool, Gary has not only served as president of the Rockford Preservation Commission, but has also personally restored a number of buildings in town, including a 1905 Craftsman worker’s cottage that now serves as the office for his used car dealership. His latest project—undertaken with the help of friends and restoration specialists Kurt and Sarah Bell—is his own home, a large brick and stucco residence attributed to architect Lawrence Buck, who worked for Frank Lloyd Wright in Chicago before opening his own practice in Rockford in 1903. 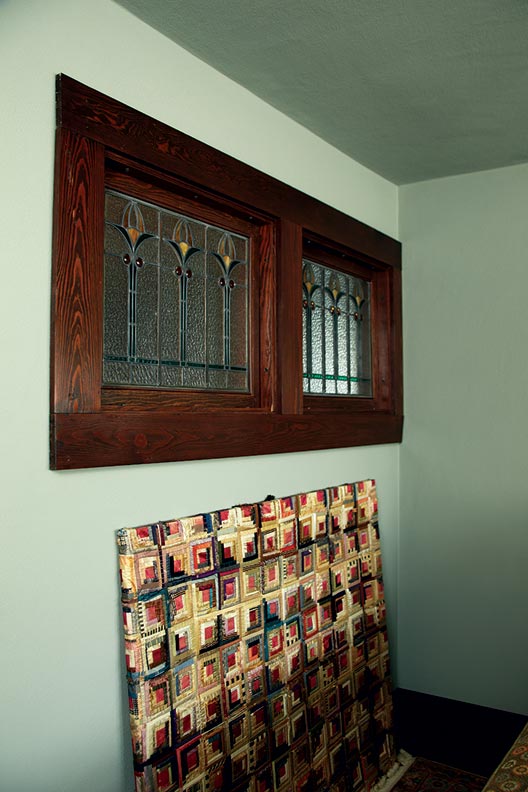 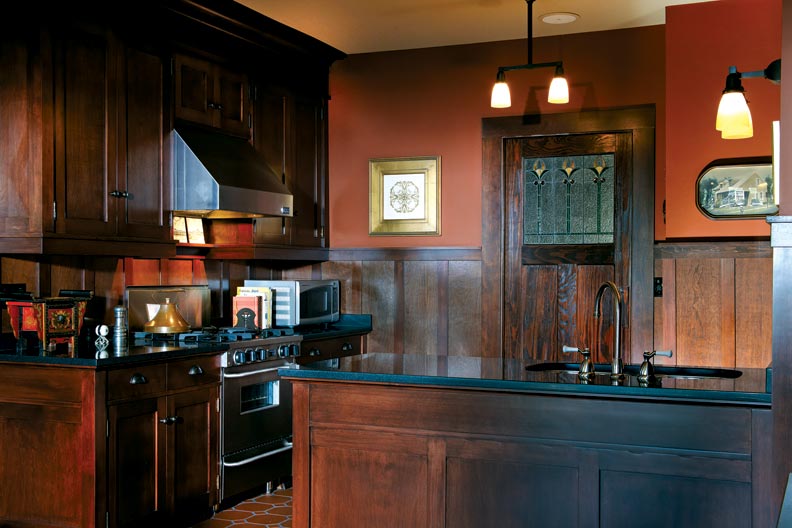 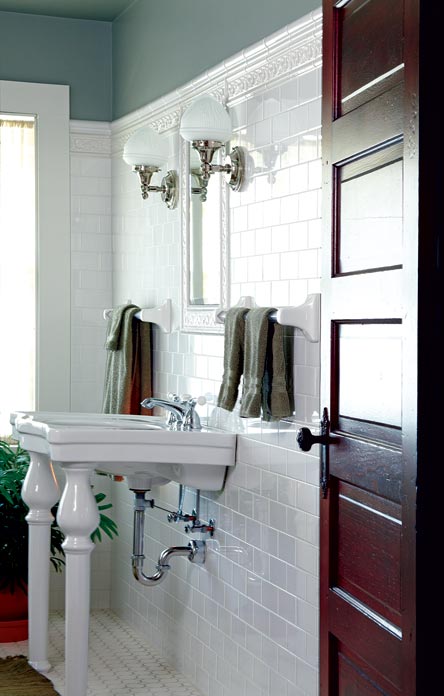 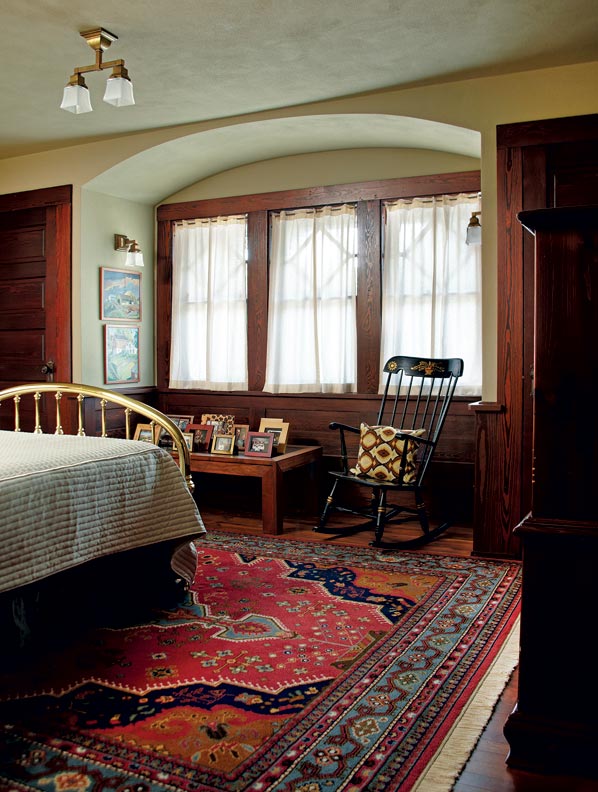 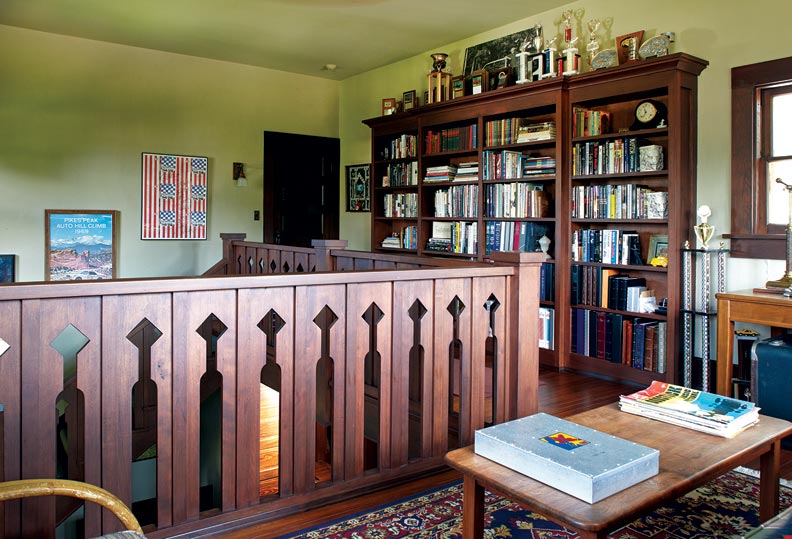 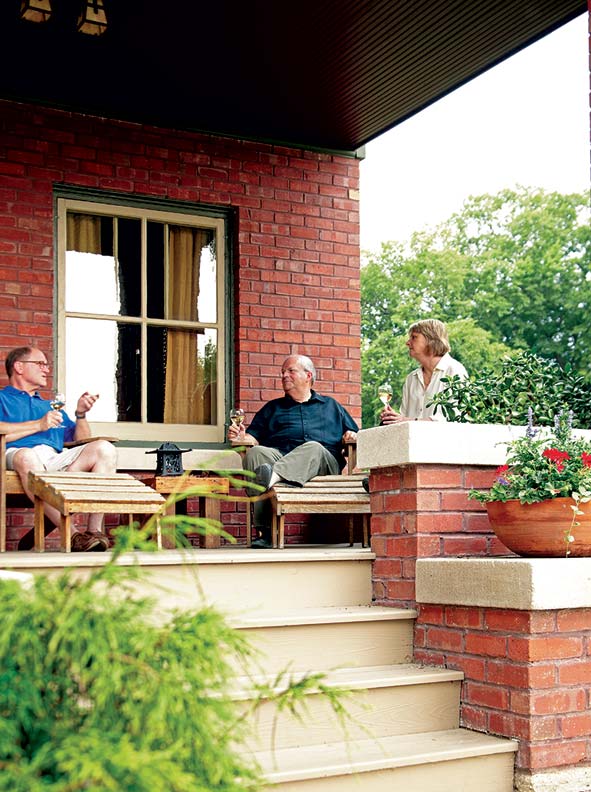 Like the city itself, the seven-bedroom residence had not held up well over the years. Built in 1908 for Oscar Wigell, who owned a music store and piano salesroom, the property suffered from well-intentioned updates, subsequent neglect, and threats of demolition before Gary acquired it in 2002. When he bought the house from the Community Foundation of Northern Illinois, he agreed to maintain its status on the city’s register of historic places. To take advantage of historic preservation tax credits, he also had to adhere to the Secretary of the Interior’s Standards for Rehabilitation. However, he’s quick to explain that he isn’t slavish about restoration. “Kurt, Sarah, and I feel that it’s important to save old buildings, but that they have to continue to work and function. Everything can’t be a museum.”

Save for squatting animals, the house had been vacant for seven years, and the damage ran deep. “Most of the pipes had burst, and the plaster had separated from the wood lathe,” Gary recalls. Acting as general contractor, Kurt Bell removed all the trim, plaster, and lathe. “Then we installed insulation, put in an all-new electric system in metal tube conduit, all-new plumbing, and replastered,” says Gary. “Although it looks original, it’s pretty much a new house underneath the skin.”

The next major project was the exterior. The previous owners had spray-painted the entire façade with an epoxy-infused paint, a band-aid attempt to avoid much-needed repointing. To remove it, they applied a chemical stripper and left it on overnight, then power-washed it off. “When we took it off,” says Gary, “all the mortar came with it. So all the bricks were precariously hung. It was almost eerie to see.” A crew from Mike Harris Mason Contractor Inc. spent five days in the rain addressing the issue. (The home’s large eaves allowed the men to work despite the weather). “I drove by one day and they all had these yellow raincoats on,” remembers Gary. “It looked like a hornet’s nest.”

As for the home’s slate roof, a large section of it had been removed and replaced with composite shingles, which had started to leak. The original copper flashing, gutters, and downspouts had long since disappeared. Gary caught a lucky break when Robert Raleigh, Jr., the owner of Renaissance Roofing in nearby Belvidere, Illinois, noticed the slate that capped the house and gave him a call. “He does a lot of salvage and had just bought a 200-year-old roof off an Army building on Long Island that was the same color as mine. Because the slate he had was heavier than mine, he replaced the 2×4 support timbers in the attic with 2x8s and replaced 2×6 rafters with 2x10s.” In addition, Robert installed new copper flashing, gutters, and downspouts.

While the home retained much of its original detail, including Victorian doorknobs, extensive millwork, and a handsome fireplace with Seneca quarry tile and an inglenook, other decorative features had been lost or compromised. The original lighting fixtures had been chucked in favor of cheap replacements (some not even intended for interior use), and just a few pieces of leaded glass remained in the dining room’s built-in cabinet.

An acquaintance introduced Gary to the daughter of a previous owner, who produced family photographs from the 1950s; they revealed that the cabinet’s upper portion and windows in the dining room’s pocket doors had once sported leaded glass with a stylized floral motif. While these were removed from the property when it changed hands in the 1980s, through this new contact, Gary was able to track down the person who had bought the original panels, strike a deal, and restore them to their original locations. Gary then had local glass artist Frank Houtkamp re-create the design for the swinging door to the kitchen.

An additional touch true to the spirit of the home is Sarah Bell’s decorative painting in the front hall: a period-appropriate geometric frieze she discovered in a book called Authentic Stencil Patterns: 1890-1930. Although undated, the design—done in green, red, yellow, and gold—suggests a transition from the Victorian era to Mission style, she says.

While the parlors and dining room have been returned to their original appearance, Gary did allow himself one dramatic intervention, reconfiguring two bedrooms into a master bedroom and den, then breaking through the ceiling to create a library in the third-floor space, which had been dedicated to servant use when the house was built. Accessed by a new staircase and open to the den below, the library sits in the tower that gives the residence its distinctive profile. This contemporary arrangement is made sympathetic to the spirit of the house with a balustrade that matches the stacked arrow design of the spindles in the home’s main staircase.

The original kitchen had been given an Art Moderne makeover in 1944, with steel cabinets and linoleum countertops—and like the rest of the house, it was in utter disrepair. Gary replaced the steel cabinets with ones made from cherry-stained ash, along with a terra-cotta floor and honed black granite countertops. A large plate glass window installed in the ’40s was replaced with French doors, which lead to a terrace atop the garage Gary added to the rear of the house. Constructed from bricks salvaged from a decrepit detached garage on the property, the addition’s style matches that of the 1908 residence.

Gary’s 30-month project earned him a personal call of congratulations from Professor Michael Jackson, chief architect at the Illinois Historic Preservation Agency, and awards from both a local historic preservation association and the statewide group Landmarks Illinois. Although delighted to receive such kudos, Gary’s greatest satisfaction may well lie elsewhere. “I wasn’t planning to move here, but this was something we were going to lose,” he says. “A part of me hopes that people will see this and want to do something like it themselves.”

Adding On to a Tudor

House Inspired by the English Countryside