On September 10, 2008, Leonard La Magna, a consultant for the oil and chemical industry, was getting email reports that Hurricane Ike was headed toward Galveston. Ironically, the storm would follow the same path as the 1900 Great Storm, which killed 8,000 residents and destroyed countless homes, but bypassed the 1886 Matilda V. Wehmeyer house—the eclectic Colonial Revival Leonard had just completed restoring three days earlier with the help of art teacher and interior designer Kevin Folzenlogen of Chestnut Hill Design.

“The paint wasn’t even dry yet,” recalls Leonard, who went into overdrive searching for plywood to board up the house. When that proved fruitless, he called his Houston-based contractor to bring down a load with a team to install it. The following morning, the crew secured the house just as mandatory evacuation warnings caused throngs to flee the island.

Hurricane Ike made landfall in Galveston on September 13. Floodwaters breached the 17′ seawall (erected after the 1900 storm), tossing boats and debris in their wake. In total, the hurricane killed 112 people, knocked out power to 4.5 million residences, and flooded thousands of homes. With the city’s infrastructure destroyed, the island was shut down.

Two weeks later, Leonard returned to the house with Kevin to assess the damage, surprised to find that it seemed intact. Could it have survived a second deadly hurricane? Kevin removed the boards and went in first. “What I found was complete devastation,” he says. “The newly upholstered antique furniture was saturated with water and covered in mud; mold was forming on its legs. The original floorboards were buckling. Appliances in the brand new kitchen were upended, the custom cabinets destroyed.” 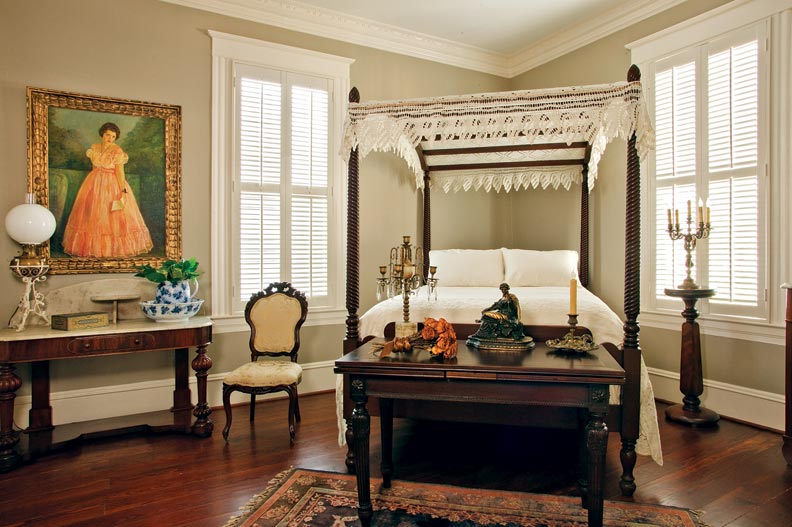 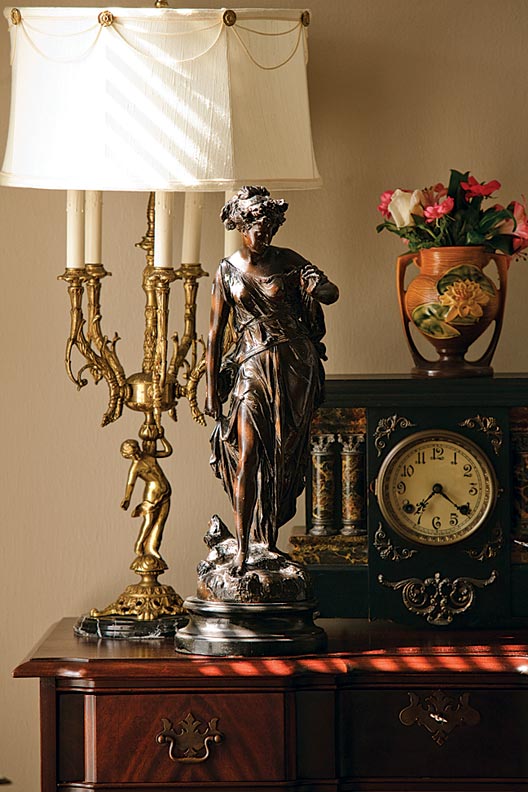 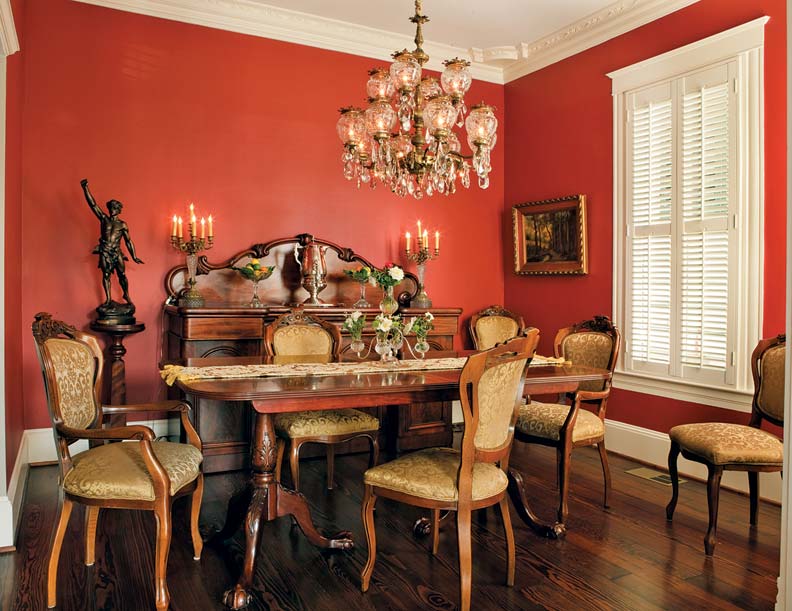 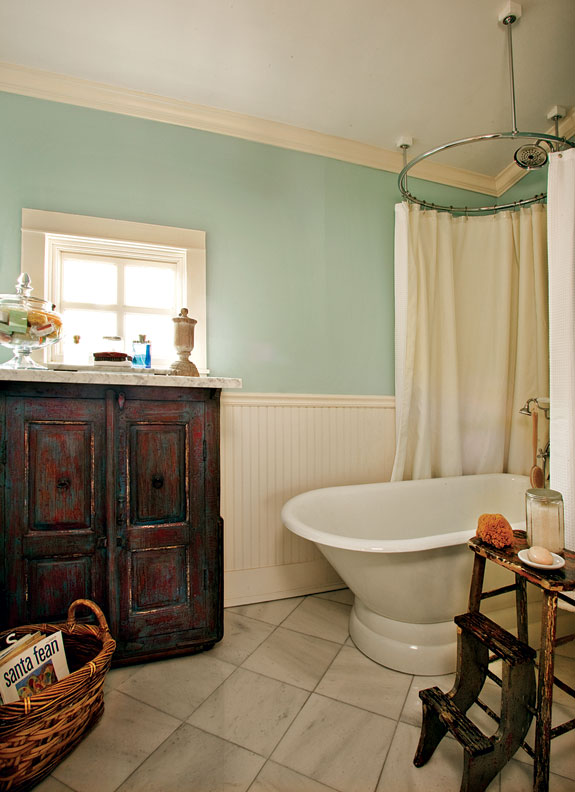 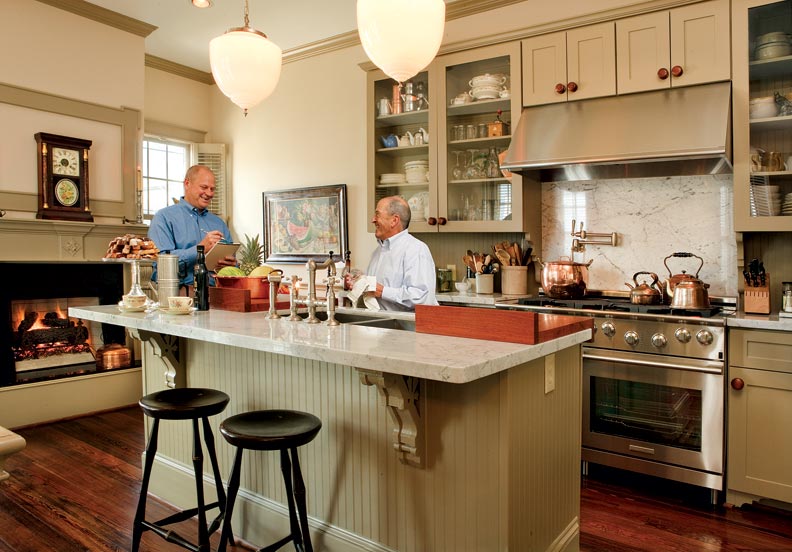 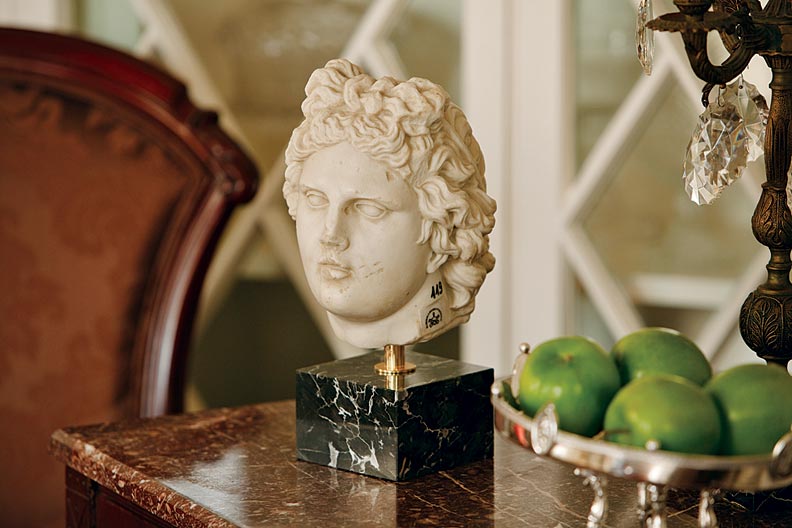 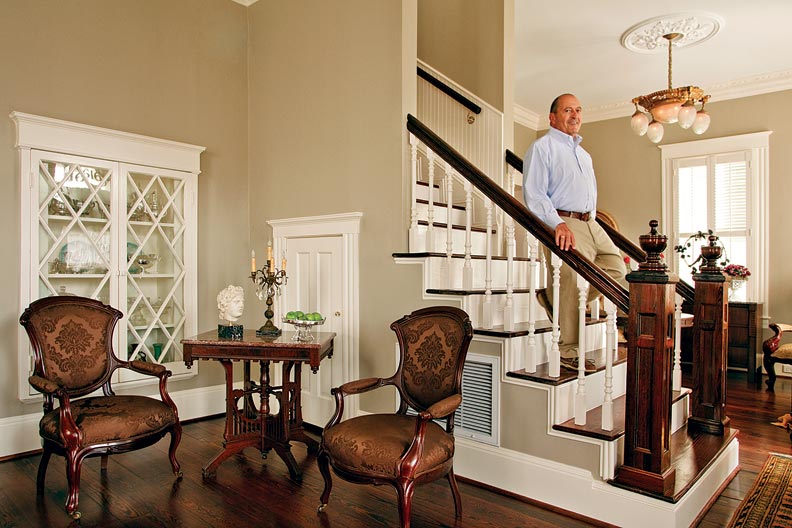 A neighbor who rode out the storm later told Leonard that the water had reached 6′. It flooded the houses for less than 24 hours, but the simmering September heat had caused mold to form quickly. Leonard recalls the look on Kevin’s face as he walked out. “I knew in a flash,” he says, “that all the painstaking work we had just completed was gone.”

When Leonard purchased the house in 2007, he was attracted to its simplicity. “I liked the porch, the twin front parlors, and the East End Historic District location, which is within walking distance of The Strand,” he says. The interior, however, was a mess. A previous owner had blocked the original staircase balusters with an archway that obscured the right parlor. A small wall jutted out from the left parlor window as if to block drafts from the entrance. Similar archways had been added between the parlor and dining room and to one of the four upstairs bedrooms.

“Before we removed the archways,” says Kevin, “we hired a structural engineer to check that nothing was connecting to a load-bearing wall or had anything to do with the original architecture.” Based on the engineer’s findings and his own knowledge of historical architecture, Kevin sketched a full layout of both floors, with diagrams and measurements to determine what the architect’s original intent had been.

Clues emerged along the way. A former owner stopped by during construction and noted that a now-missing exterior door in one of the upstairs bathrooms—which had been “modernized” in the 1950s with contemporary gold hardware and pastel fixtures—had led to a former staircase that descended into the garden. After removing a wall between the two baths, Kevin also discovered about 2′ of space that indicated there had once been a door connecting them. “This found space allowed us to make room for the new bathtub in the blue bath and the shower stall in the master bath,” he says.

Leonard, a talented chef, wanted a larger kitchen with modern-day conveniences, so Kevin united the original kitchen with two adjacent spaces: a utility room and a small enclosed porch. The annexed space allowed him to incorporate a seating area and fireplace. “When we took down the partitions,” recalls Kevin, “we discovered the original flue for a coal-burning stove right where I planned to install the fireplace.”

During the first restoration, Leonard resided in a condo, while his crew camped in a trailer in the back yard. “I didn’t want any surprises, so I was there every morning, orchestrating everything,” says Leonard. “When you start ripping something out, you never know if it’s connected to something else.”

Case in point: the remuddled staircase. After tearing out the bottom third of the structure, the crew noticed an imprint on the hardwood floors on both sides of the staircase, indicating that it had once split at a central landing, with stairs leading into each parlor. After the hurricane, a woman who had lived in the house in the 1960s and ’70s showed up with photographs that confirmed that the original staircase had been torn out in favor of the archways. “Her son used to give puppet shows on the landing,” says Leonard. “It was his little stage.”

Having acted as general contractor on the restoration of eight Galveston houses prior to Hurricane Ike, Leonard knew he needed to contact his various insurance companies while waiting in Houston. “On the day I returned to Galveston,” he says, “I received calls from FEMA and the wind insurance company, and the ball was rolling within three days.”

Inside the house, Leonard and Kevin also acted quickly. “After deciding to save the furniture, I had my housekeeper and her son over to help me wipe down the furnishings with bleach,” Leonard says. “Within six hours, all the furniture was outside, inventoried, and ready to be loaded onto a truck. The furniture restorer was instructed to strip all the fabric off the chairs and place them in a drying room. Kevin began ordering replacements for all the fabric, while I arranged to have the furnishings shipped to the upholsterer.”

Told it was imperative to tear out the walls to stop the growth of mold, Leonard installed a huge generator in the back yard to run power tools for repairs, and the air conditioning and dehumidifiers needed to prevent further mold. Nevertheless, 4′ of plaster had to be removed from the first floor, but the rest of the walls remained intact. One monumental job that took months to complete during the first restoration—the crown molding—was spared.

The floors, however, were too threatened by mold found in the subflooring to save. Although 19th-century pine flooring proved difficult to locate, Leonard managed to find a flooded architectural salvage business that had stored antique pine paneling high up in the rafters. Leonard and his contractor went through every board. Then his carpenter installed a huge planer on site to plane each board to the same thickness to replace the buckled flooring.

“The floor guy loved it,” says Leonard. “We sealed off the staircase and upstairs bedrooms with plastic to contain the dust, and when the plane blades kept breaking, I said, ‘Don’t worry, I’ll pay for new ones; just keep working!’”

Leonard and Kevin’s most daunting task was to crawl under the house to remove the insulation, HVAC ductwork, debris, electrical wires, and junction boxes damaged by the saltwater. The kitchen had to be gutted and rebuilt. Nothing could prepare Leonard for the sight of his beloved 48″ range tossed to the curb, along with the brand new refrigerator, appliances, and mounds of wet insulation. “It was like a knife to the heart,” he says. “We tried to save the marble countertop, but it was glued to the cabinets and had cracked.”

By using the same Houston-based team that had restored the house to rebuild it, Leonard was guaranteed excellent workmanship, and avoided the scam artists who either bilked others or kept them waiting while they did other jobs. “With curfews in place, it took 11 months to rebuild,” says Leonard. “It was stressful, emotionally and financially.”

Three years later, the house shines like a beacon in the sun. No doubt Matilda Wehmeyer would be pleased by the monumental effort expended to save her architectural jewel once again.

A Rustic Cottage in Maine

Bungalows of the Arts & Crafts Movement