She grew up in a Craftsman bungalow; he lived in a Mid-century Modern house, then in a split-level. Yet Margaret Gerteis and Richard Brown were always drawn to Victorians.

When, in 1985, the couple found a lovely 1885 Queen Anne located on a side street in Cambridge, Massachusetts, within walking distance of work, shops, and public transportation, they were delighted.

“We thought of living on the South Shore and commuting, but we like it here in the city,” says Richard, who is a dentist and a bluegrass musician. “We thought that this neighborhood would come back.”

“When we bought it, the house had just recently been turned back into a single-family,” explains Margaret, a health researcher. “I walk to work,” she adds.

Their one-and-a-half-story frame dwelling is part of an almost unbroken row of Queen Anne houses built between 1883 and 1891. Theirs features imbrication (decorative shingling), fancy bargeboards, and a wraparound porch ornamented with arched spandrels and carved rosettes. They settled in, raised a family, worked, and, eventually, watched the children leave. 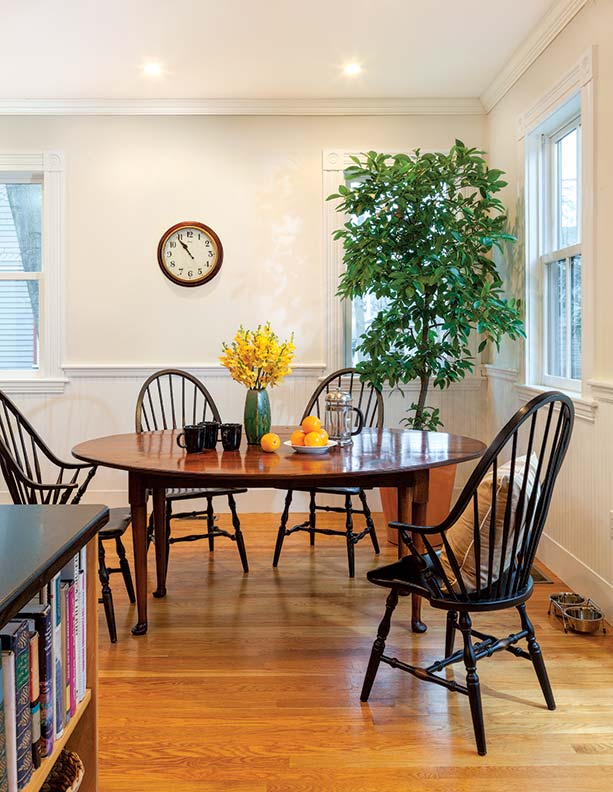 “Certain things were never right about the house,” Richard says. “The old renovation was a ‘white paint special.’ The kitchen was inadequate and had no foundation under it—everything was rotting.”

Margaret adds, “Clutter was overtaking my life. I wanted clarity and order.”

The couple goes on to list the elements they believed would bring them sanity: a new kitchen, a master bedroom suite, and home offices for each of them. After a false start with an architect who focused on décor at the expense of function, Margaret and Richard met John Altobello, a local architect who has renovated a great many late 19th-century Cambridge houses.

“People are moving back to the city and appreciating the historic quality of the architecture,” he says. “Like many modern city dwellers, Margaret and Richard wanted more space, but they wanted it to be in keeping with the house they loved.”

John designed a 30′ x 40′ addition that holds a new kitchen at the rear of the first floor, with a new master bedroom suite above. He rebuilt the decaying basement and foundation, and introduced updated heating and cooling, wiring, and plumbing. He specified a new location for the existing second-floor bathroom while adding a bath in the master suite; the first floor got a new half bath. He converted the third-floor attic into spacious and separate home offices for the couple, adding a full bath up there as well. For safety and ease of use, two existing wood-burning fireplaces were converted to gas; a third gas fireplace was installed into the sitting corner of the new kitchen.

Fortunately, original architectural elements in Margaret and Richard’s somewhat-restored house had been largely left intact, only covered up. In the formal downstairs rooms, herringbone parquet hardwood floors survived. The original door casings, with their fluted trim and corner blocks, remained, as did the pocket doors between the parlor and the formal dining room. Where crown moldings had been removed, John specified new, hefty ones modeled on surviving originals. The expansive new kitchen, with its cooking, dining, and sitting areas, is furnished with birch cabinets in a modified Shaker style, honed black granite counters, a slate backsplash with a tumbled marble inset, and stainless steel appliances. The same crown molding carries into this room, bringing coherence.

The couple’s collection of Sheraton and Hepplewhite style furniture suits the New England house and its 19th-century rooms. “We like the simpler profiles,” says Margaret, who eschews window treatments in favor of white shades, and then only in the living room and bedrooms. Richard’s collection of oriental rugs warms the floors of both old and new rooms.

Margaret chose pale hues for the walls. “I have always gravitated toward neutral walls,” she says, “so that you can switch furnishings around. On the north side, which is the kitchen,” she continues, “the color is warmer, while in the living room, which faces south, it is cooler. Each room is a different color.”

Newly bright and functional rooms delight these homeowners, who have seen their house and its neighborhood return to original polychromed splendor. They love where they live more than ever.

Find resources for this story here.