The first time interior designer Marisa Morra walked into Charlotte Hart’s 1915 Colonial Revival house, she asked, “When did you move in?”

“It didn’t look at all lived-in,” Marisa recalls. “The architecture was beautiful, but there were boxes in the corners. I assumed that she had recently bought the house and was in the process of moving.”

In fact, Charlotte and her husband had bought the handsome red-brick structure, located on a corner lot in a well-established Newton, Massachusetts, neighborhood, when they were first married. They had two children and two demanding careers, and the strain caught up with them.

“When it came to the house, we could never agree on the best course of action when things needed to be done,” Charlotte says. “For instance, the ceiling leaked, but trying to decide where to start or who to call was so stressful, we never got it fixed. So the ceilings had stains, the wallpaper peeled, and we just let it go.” 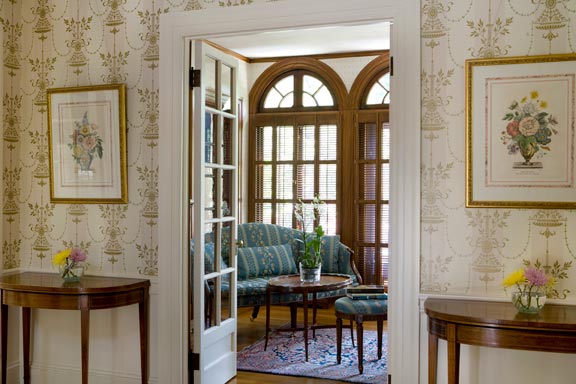 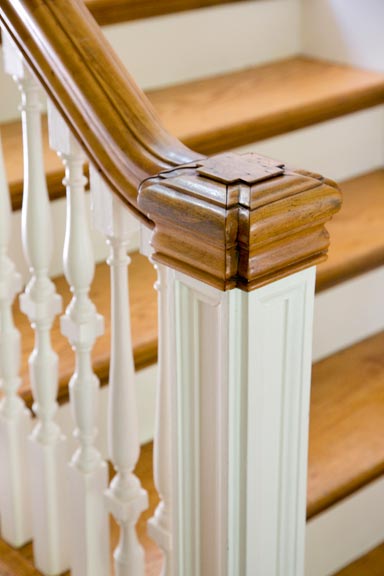 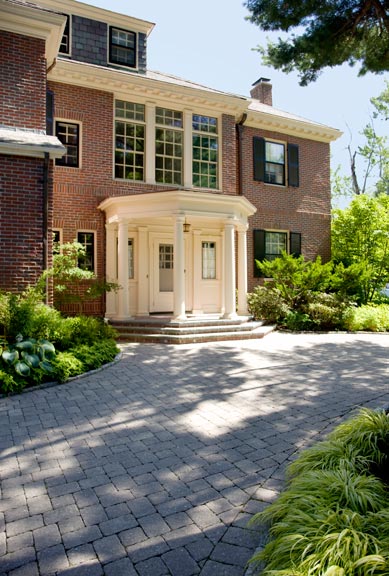 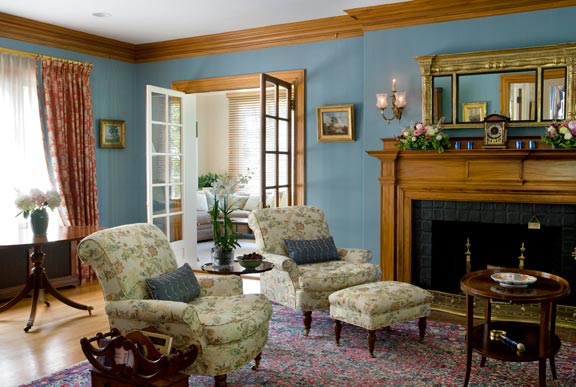 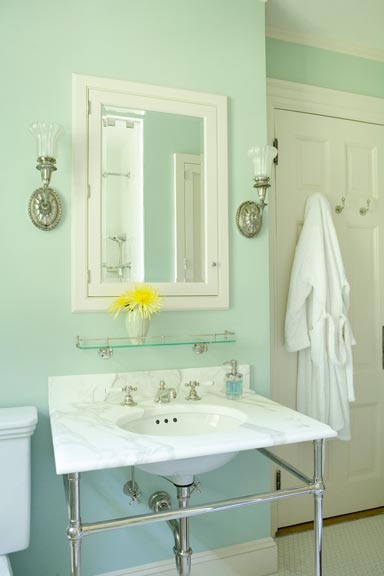 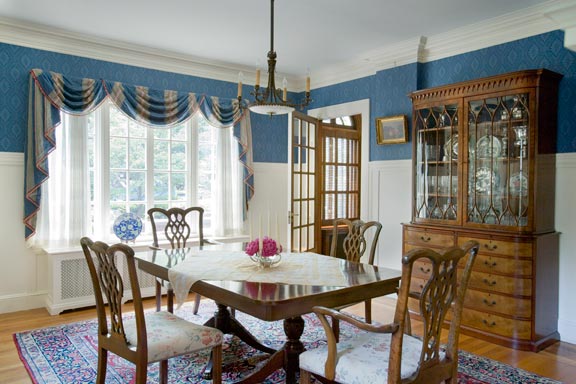 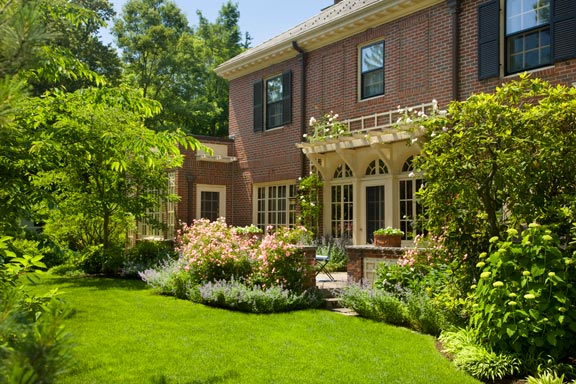 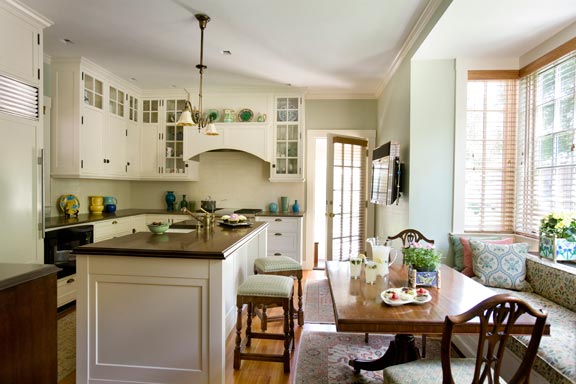 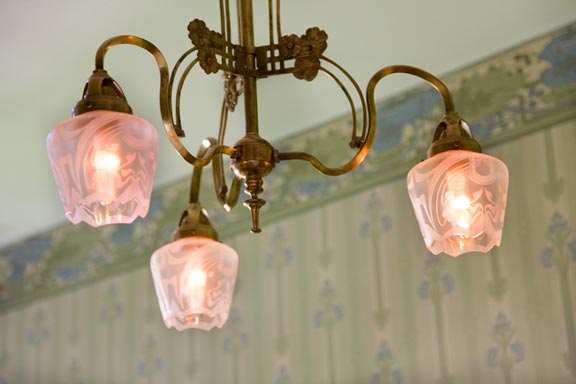 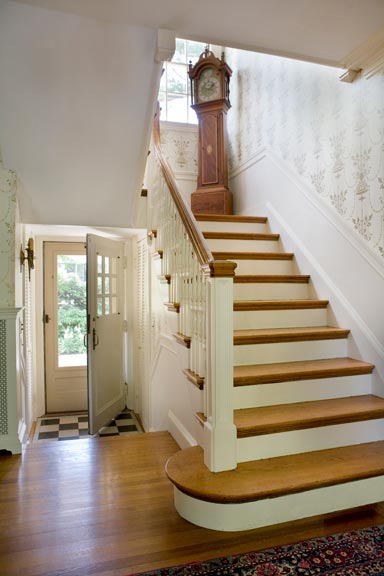 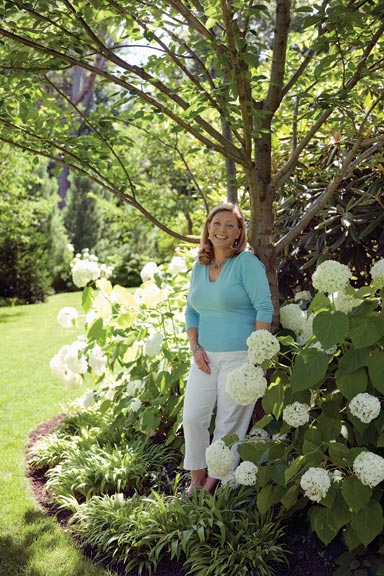 Eventually the marriage ended, but Charlotte’s enthusiasm to take ownership of her home’s restoration began anew. “I’d always liked the house, but I’d never done anything to make the rooms comfortable or pretty. I didn’t even know what my tastes were, much less how to create an interior that would express them.”

Today the interior of the 4,500-square-foot home is a jewel box of Colonial Revival delicacy and refinement. The decor mirrors Charlotte’s fondness for a palette of soft blue, rose, and ivory hues; antique furniture; Oriental rugs; and superb late-19th century lighting.

The process of turning a drab, neglected domicile into a home reflecting Charlotte’s yet-to-be-discovered style began with an oil painting.

“Soon after my divorce, I visited a friend who worked in a Boston gallery,” she remembers. “I was drawn to a small floral painting that dates to the turn of the 20th century. It cost more than I had ever spent on anything; certainly more money than I ever spent on myself. But I bought that painting, and I hung it in my bedroom. Every day it reminds me that I can have beauty in my life.”

Bringing beauty to the entire house, however, was a bit more daunting. Charlotte originally hired an interior designer, who proceeded to faux-finish the front hall into a Tuscan fantasia.

“I knew I didn’t like it right away,” she laments.

Charlotte’s gallery-owner friend rushed to her rescue. She referred Charlotte to Marisa Morra, whose company, Artistic and Historic Interiors, specializes in interior design for period homes.

“Old houses are exciting to design, because they inform you what works by virtue of the details that already exist,” Marisa says. “You just need to ‘read’ the architecture, and you’ll get it right.”

Charlotte Hart’s house, she discovered, was a Neoclassic gem with a bad facelift. “I walked in and saw that Tuscan stucco: It was orange—with squiggles.” Marisa shudders. “There was white leather furniture, tacky modern light fixtures…it was awful. Charlotte knew it was wrong, but not why it was wrong. But once I explained the historical and architectural background of her house, she got it.”

Colonial Revival was a popular building style in early 20th-century New England. Just prior to World War I, Colonial Revival houses and furnishings were shorthand for conventional good taste and, for immigrants, American assimilation. Charlotte’s home, which is a high-style Colonial Revival, also boasts the hipped roof and triple Palladian windows of the earlier Federal style. Marisa says, “We first concentrated our efforts on the dining room, because Charlotte had the right table, chairs, sideboard and hutch. When we chose wallpaper and a chair fabric, there was a truly ugly, fluffy-pile, 1960s Oriental rug (bought by her husband) that Charlotte said we had to work around. I could tell that she hated it.

“After trying to work with it for a bit,” she continues, “I said, ‘If we design the space around a rug you despise, we’ll have a room you hate, too. If you give yourself permission to put something you love in there, everything that comes after will be easy.’ For Charlotte, it was a breakthrough. She gave the rug to one of her kids, and we bought the lovely Persian that dictated the deep-blue wallpaper. Now the room is splendid!”

“At first, the process was overwhelming,” Charlotte admits. “But Marisa walked me through until I felt more confident. When I couldn’t visualize how something would look, she’d take me to another client’s home to show me a particular wallpaper or color in situ.”

Three years of working with Marisa finally gave Charlotte the confidence to tackle the kitchen. Through the years, the original kitchen had become an inefficient assemblage of small rooms. Marisa designed a bright, functional kitchen that features easy entry from the driveway and handsome new appliances. The new cabinets are patterned after originals in the adjacent butler’s pantry. A new window seat brings light into the room while providing comfortable gathering space around an antique Federal pedestal table.

“The house is in a historic district, so the plans had to go before the historic district commission,” Marisa explains. “They passed easily, because we didn’t change the foundation; the only structural change was to replace an existing window with one that’s cantilevered, so it was done in a historically sensitive way.”

Charlotte is only the house’s third owner. In 1915, it was built by a local businessman as a wedding gift for his wife. After the death of two spinster daughters who lived here their whole lives, the house was occupied by another owner for 15 years before it fell into Charlotte’s hands.

“Though he was in the fuel oil business,” Charlotte says, “I think the original owner built an early version of a passive-solar house. The sun comes into every room as the day progresses, starting with the kitchen, which is a glorious, bright place to be in the mornings. By the later afternoon, it has moved around to the living room.”

“Old-house rooms were designed more specifically,” Marisa explains. “Morning rooms and parlors were generally lighter, whereas libraries and evening rooms were often darker. The enfiladed rooms determined consistent style and color throughout. For Charlotte, however, allowing herself to have things she found beautiful and that really resonated with her was the key to getting this house to look the way it does now.”

Charlotte Hart’s life has expanded; she sails, dives in the Caribbean, and speaks with joy about life in her beautiful home. “I love every room. Every part of this house makes me feel good.”