Our bungalow is on the St. Croix River in Osceola, Wisconsin. Using newspaper microfiche records, ancestry.com, and phone records, we were able to find the second owners’ daughter, who was in her late 80s. She’d remodeled the 1915 house during the Sixties. She didn’t have old photos, but she could tell us how the house looked originally.

As you can see in the “before” picture of the living room, it got a thoroughly “modern” update. When we removed the massive, pale-colored brick-face fireplace, we discovered that the original Strobl tile had been left on the hearth. I went to North Prairie Tile Works and they were able to closely match the old tile for the new surround. The motif of pine trees nods to the trees along the St. Croix. As we worked in the living room, we found evidence that two side windows had flanked the fireplace, so we put them back, using antique leaded-glass windows. Rather than building in bookcases or display cabinets, we added inglenook benches below, flanking the hearth.

The style-defining colonnade between main rooms also had been removed. We could see what size it had been and it was easy to guess at the shape. Local cabinetmaker Eric Pendexter (Horse Creek Woodworks, Dresser, Wisc.) made new boxed columns and display cases. He also built the mantel and the benches.
In the dining room, longitudinal boxed beams remained on the ceiling. Shadows showed us where cross beams had been. Small, filled holes told us there had been beam lights at the intersections. We put it all back.

The kitchen had been remodeled in the 1980s by a later owner. It was functional but bland. To bring it back to the bungalow era, we painted the cabinets white. A cabinetmaker built new doors and drawer facings, and we added old window glass salvaged from a barn to the doors. The knobs and handles are now period reproduction hardware. I chose soapstone countertops and a copper sink. We also added a screened porch at the rear of the house.

One last fun fact: Osceola is the birthplace of Gustav Stickley, the father of the American Arts & Crafts movement! 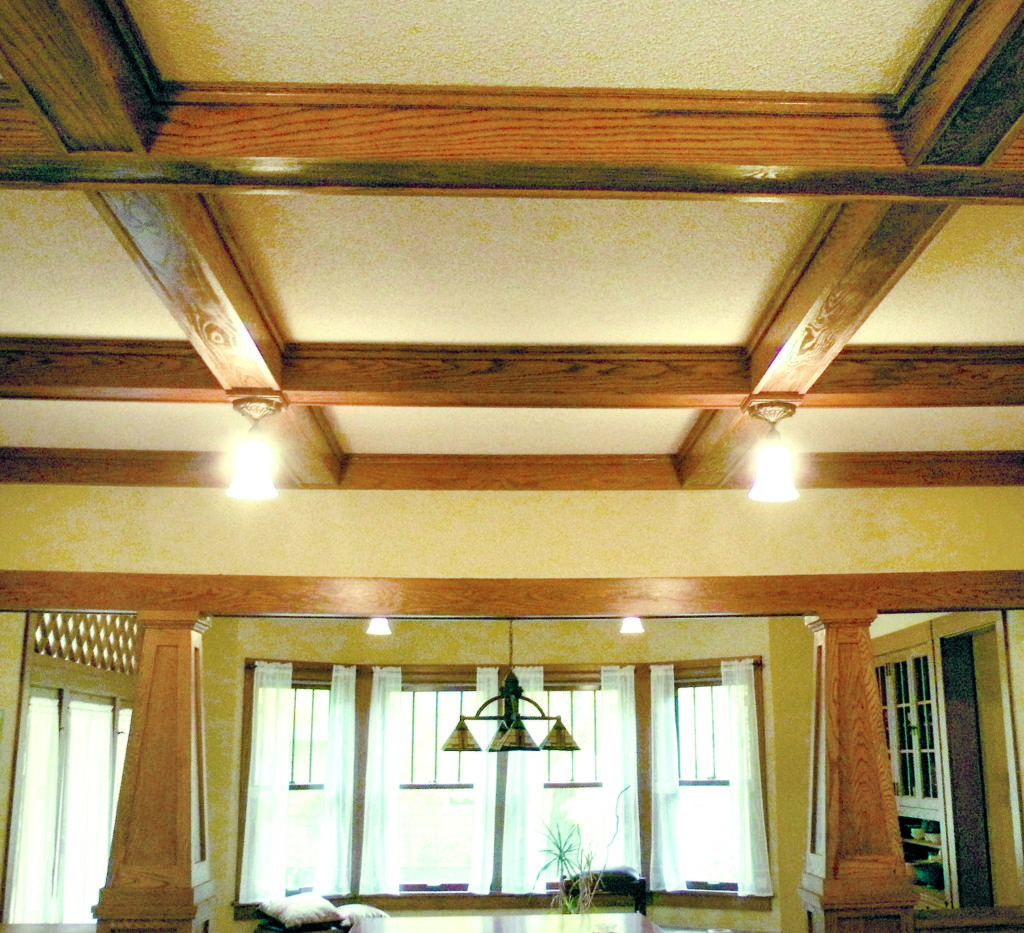 Paint Colors
The bungalow exterior is painted in Benjamin Moore colors from their Historical Colors collection. This is an analogous, almost monochromatic, paint scheme: all the colors are closely related, really just tints and shades of each other. It’s anchored by the natural, darker colors of the stone piers and stained shingles in the gable.
From darkest shade or strongest value to lightest tint: