Sometimes, a picture is worth a thousand words. That was definitely the case the first time Rich and Pam Green saw photos of the historic Eitzen Mansion in California, Missouri. Their initial excitement only intensified when they stepped inside the three-story Queen Anne home.

“I knew this was definitely the home of our dreams,” Rich says. “The beautiful craftsmanship, the original pocket doors, and the ornate fireplaces were pristine—as if the house had been sealed in a time capsule. We couldn’t believe our good fortune.”

The local landmark was built in 1898 by Charles A. Eitzen, the eldest son of Charles D. Eitzen, a Civil War hero, wealthy merchant, and prominent citizen of Hermann, Missouri, a German community established in 1837 along the banks of the Missouri River. At just under 8,000 square feet, the house contained 21 rooms, nine fireplaces, and a full basement, as well as a carriage house, all sitting on 1.5 acres surrounded by a stone and wrought iron fence. It was also the first house in Moniteau County to have running water. 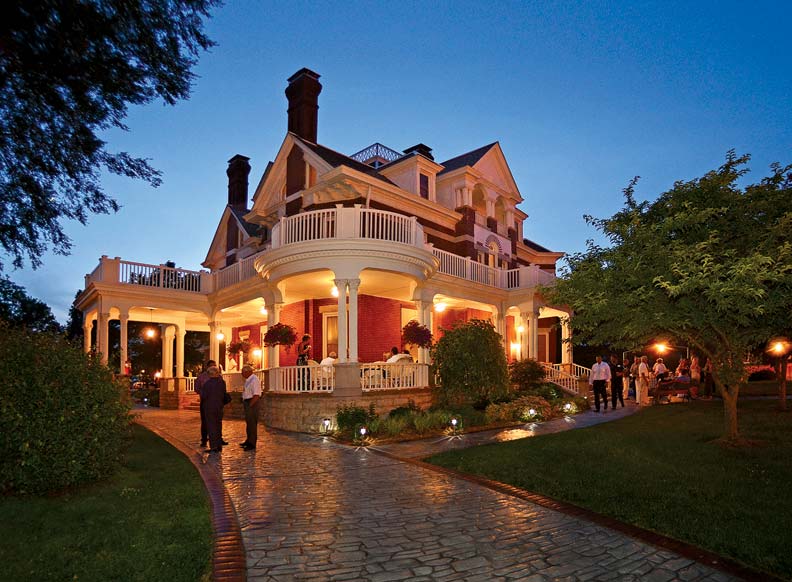 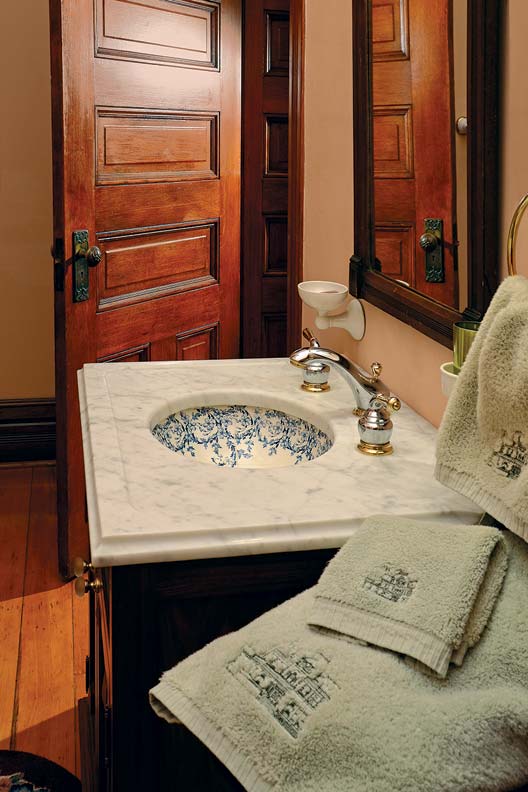 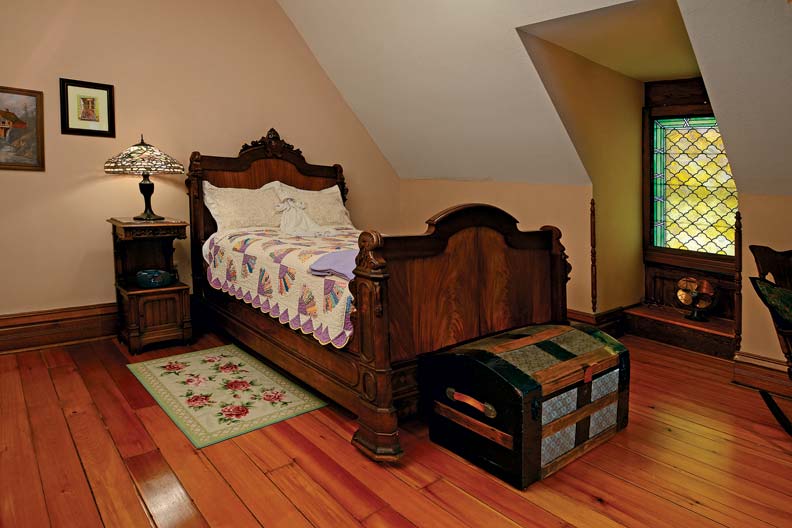 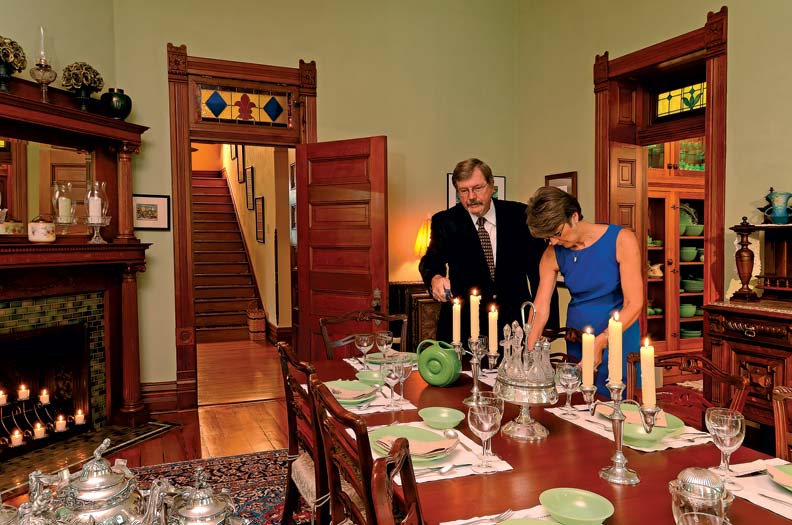 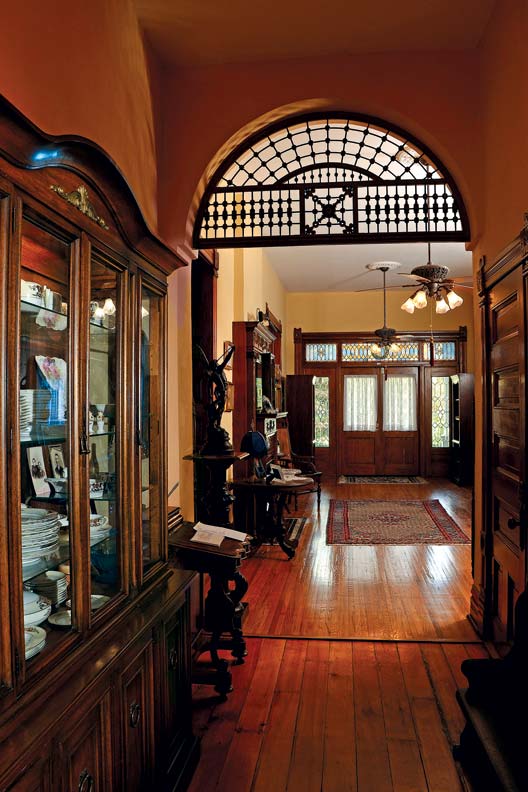 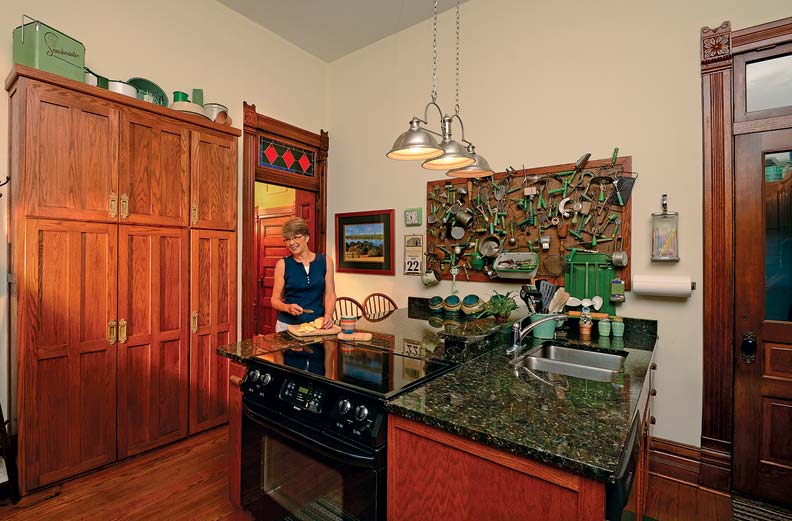 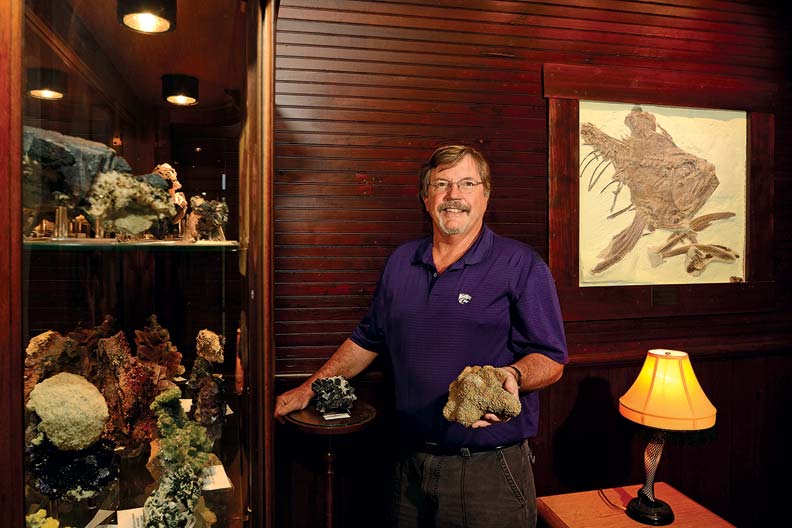 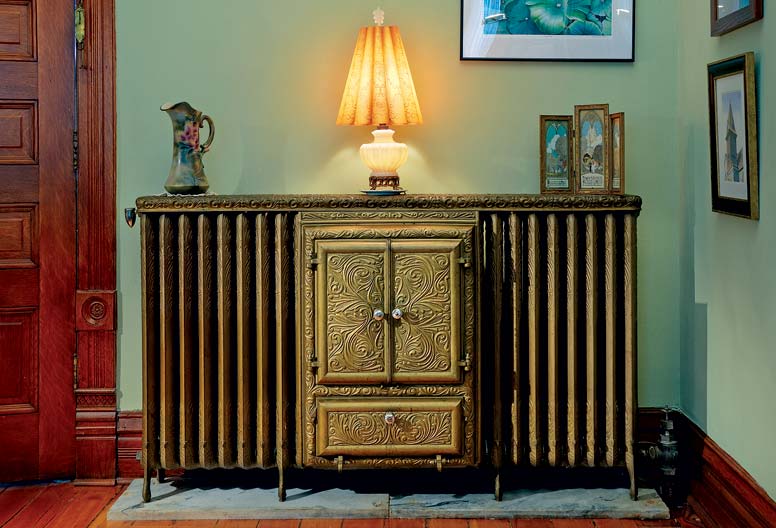 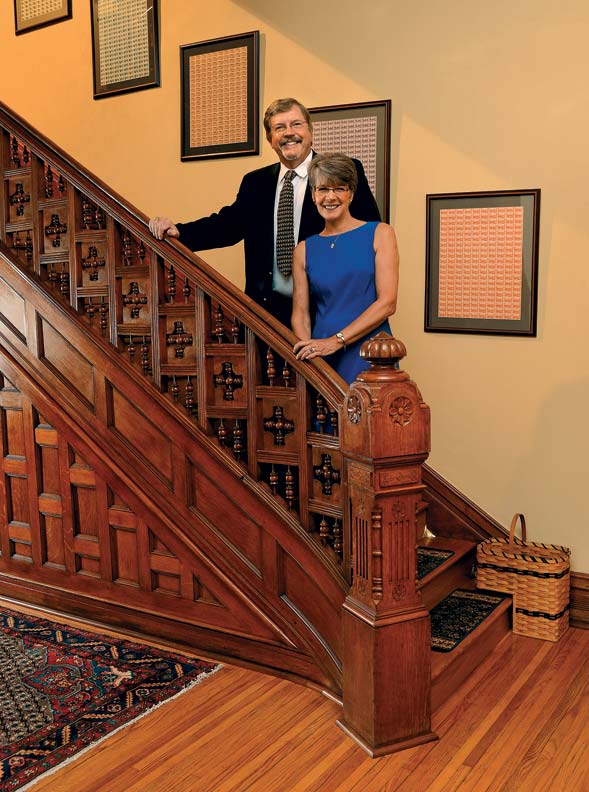 Charles died only four years after the home was completed, but his wife, Bertha, and their children would reside there until 1952. After the Eitzen family sold the home, it served as the Tilton Nursing Home for four decades. In recent years, various owners have tried to turn the house into a bed and breakfast and a restaurant, but were unsuccessful. Eventually it went into foreclosure; in the summer of 2002, it was again for sale.

When Pam’s daughter, who lives in the area, sent them photos of the home for sale, the Greens lived in Dallas and had been dating for a couple of years. Rich, a petroleum geologist and reservoir engineer who grew up in Hays, Kansas, crossed paths with Pam, who hailed from a Kansas City suburb, when the two worked together at the Dallas Geological Society.

“We knew we wanted to make a life together and to eventually retire somewhere in the Midwest to be near our families, but somehow this house found us,” says Pam. “Both Rich and I love the Victorian era and respect that time period, so we quickly set about restoring the home. Every item we found that had been removed from its point of origin was reintroduced somewhere into the house.”

Most of their finds came while sifting through items stored in the hayloft of the 2,000-square-foot carriage house, where the Eitzens’ caretaker had lived, along with their horse, Old Jack.

“When it rained, we could still smell the hay that had been kept in the hayloft and had once insulated the walls,” recalls Rich. “We weeded through a lot of trash, but we found many treasures, too.”

They unearthed oak cabinet doors that had been removed from the butler’s pantry and kitchen, and returned them to the revamped butler’s pantry. Tucked in a corner were two original marble and porcelain sinks that were restored and returned to bathrooms on the first and third floors. They found a pile of woodwork and corner guards, along with a basket of metal ornamentation and dentil molding from the outside of the house. A small white clawfoot bathtub was sitting outside the carriage house, so they restored it for a third-floor bathroom. One morning, they found a swinging door, long since removed, leaning against the carriage house, returned in the night by a mysterious visitor.

While the Greens made weeklong trips to the house every couple of months, they turned over the bulk of the workload to contractor Johnny Roush, who had built Pam’s parents house and had often visited his mother at the house when it was the Tilton Nursing Home. “We decided to go local as much as possible for the work,” Pam says.

Roush’s team power-washed and painted the exterior, and cleaned and revarnished all of the interior woodwork. They also removed tons of iron pipe from a fire alarm sprinkler system left over from the nursing-home days; the resulting holes in the ceiling were covered with a fresh layer of drywall. The walls were re-plastered and repainted, a difficult task because the plaster had originally been applied to brick, rather than lathe. Linoleum flooring in the kitchen and butler’s pantry, in some cases seven layers thick, was removed to reveal original ash, oak, and yellow pine flooring that was sanded and restored. Rich scrubbed, sanded, and sealed the wood on the front door and also carefully scraped old, dark paint off of the original stained glass.

Although the Greens installed a zoned central heating and air-conditioning system to help control energy costs, they did keep two of the original radiators. The ornate one in the dining room sits on a marble slab and contains a food warmer; Pam now uses it to store table linens. The other, in the first-floor hallway, was once a mitten warmer and now serves as a receiving area for calling cards.

By March 2004, “there were curtains and furniture in every room,” Pam says. The décor is a mix of furnishings they secured at antique sales throughout the region, artifacts from their travels, and items purchased from the Eitzen relatives. The family’s 1875 silver-plated tea set is displayed in the dining room, and a circa 1860 photo of the family hangs at the south portico entrance.

Throughout the restoration process, Pam and Rich pieced together a history of the family through research collected from the Moniteau County Historical Society and information gathered from Charles B. (Chuck) Eitzen, the grandson of the house’s original owner. Rich and Pam met Chuck, then 89, at his home in San Antonio in the summer of 2004.

“We brought along before-and-after photos, and Chuck shared many stories and photos of his family and the house,” Pam says. “He recognized the two oak chairs [from the carriage house] that we restored for the front hallway as being part of the family’s breakfast-room table set.”
“We also found out that the reason most of the fireplaces looked almost brand new is because the family never used them,” adds Rich.

After an 18-month labor of love, work on the main house was complete. In April 2005, the couple married on the house’s front steps, with new porch railings, lighting, and fans serving as the altar and backdrop.

“We figured if we could get through this renovation without any major disagreements, we could make it through anything,” Rich says.

Because of work obligations in Dallas, the couple didn’t take up full-time residence in the home until 2010. Two years prior, they had converted the carriage house into living space. The original unfinished paneling was cleaned and varnished, and a kitchen was added in the former horse stall. Upstairs, the hayloft is Rich’s “man cave,” where he displays arrowheads, fossils, and antique toys; the hay drop was converted into a bar. The caretaker’s room is now a workspace for Pam.

Since becoming full-time residents, the Greens have hosted annual fundraising galas to benefit the restoration of the 1885 Finke Theater and the Wood Place Public Library. Their efforts on behalf of California Progress, Inc., have also raised money for the Moniteau County Historical Society, museum, information center, gift shop, and genealogy library, which is housed in an old post-office building that Charles A. had built in 1902 and still bears the Eitzen name.

“Our house is never going to be the Green Mansion, so it’s very important to honor the Eitzens’ history and legacy by sharing this treasure with the community,” says Rich. “We know we’re caretakers, just passing through, and that this house will outlive us. We hope whoever gets the house next will care about it as much as we do.”