These homeowners went looking for history and character—and found it hiding behind partition walls. The once-grand house had become apartments, with kitchens and bathrooms tucked into odd corners. Partners John Stewart and Craig Bowman admit they knew little about Victorian architecture when they went house-hunting in 2005. For two years they’d been renting a flat in London near Tower Bridge. Their time in England whetted an appetite for historic architecture, so when they came home, they looked for a city with an appreciation for preservation. The 19th-century commuter suburb of Plainfield, New Jersey, fit the bill; that’s where they found this treasure.

Plainfield was long a bedroom suburb for well-heeled New York City businessmen; retaining its walkable downtown, it boasts ten historic districts filled with late 19th- and early 20th-century houses. One sunny Saturday afternoon their realtor showed the men the old Craig Marsh mansion—and they were entranced. Despite all of the wallboard, the place oozed with gorgeous details. A rainbow danced across the floor as sunlight streamed in through stained-glass windows and a domed skylight. Richly carved oak paneling beckoned them into rooms filled with unique woodwork. A minstrel balcony hung over the upper landing; ornate radiators remained. The verandah was partially enclosed, but multiple gables and turrets reminded John and Craig of the Victorian architecture they’d so admired in England.

Time had not been kind to the impressive residence, which was carved into separate apartments in the 1940s, turning grand spaces into small, awkward rooms. The fantastic entry hall was bisected, its carved-stone and tile fireplace hidden behind drywall. Four kitchens and cheaply built bathrooms would have to be gutted. The original lighting fixtures were gone. Walls and woodwork were slathered in industrial green and mustard-yellow paint.

Outside, aluminum siding and louvered windows shuttered the verandah and a cinderblock staircase climbed to the second floor. The slate roof had been allowed to deteriorate so that it leaked heavily for decades, creating structural damage that left the rear of the house in danger of collapse.

Tenants moved out (one had 12 cats) and the partners began an intensive five-year restoration project that would end up costing more than the purchase price. Down came the cheap partitions, and with the help of a consulting structural engineer the house was stabilized. Plumbing and electric systems were updated, insulation added, and gas heating installed.

All of the doors needed restoration, as many had been cut down from their original nine-foot height. Pocket doors were rehung in the parlors. The stairwell’s stained-glass windows and dome were miraculously intact, but they were buckling, so each panel had to be removed and releaded. Each window took about four months to restore. From hinges and doorknobs to light-switch plates, period-style replacement hardware was found to complement original fittings that remained. Woodwork and plaster was restored. Layers of paint were stripped to reveal rich oak woodwork throughout the house. The beautiful real-wood parquet floors, laid with a different pattern in every room, were carefully refinished. (Because parquet flooring has wood grain running in different directions, hand-scraping and light sanding with a random-orbit floor sander are recommended over using a drum sander, which would rip into the wood.)

The house was built with a charming but complex mix of Philadelphia green stone, pressed brick, terra cotta, and stained cedar shingles. Given the size of the house and the failure of the roof, a new slate roof was deemed out of consideration. The new roofing is a lighter-weight composite shingle in a similar color and lap to the slate. All other original elements of the lavish house were carefully cleaned and preserved or repaired. Craig and John were gratified to see the neglected Queen Anne regain its intricate details and stately demeanor.

They chose furnishings that reflect the era when the house was built, a transitional period at the end of the Victorian era and the dawn of the Arts & Crafts movement. Antiques include tufted silk-upholstered rosewood chairs and a carved, marble-topped table in the parlor, which echo the Victorian formality of the public rooms. The library, however, is furnished more simply in a pair of sensible American Arts & Crafts settles and comfortable Morris chairs. The partners enjoy world travel, especially to the Far East. Mementoes of their trips have been placed throughout the house. A whimsical crocodile grins at diners from the sideboard; an ancient wood carving of the Buddha sits serenely near the hall fireplace. John, Craig, and their yellow lab Orion find the house to be a wonderful place to enjoy history.

A House with History
This grand, 7,500-square-foot house was built on so-called Millionaires’ Row in Plainfield, New Jersey, for wealthy businessman Craig Marsh. The house was celebrated in a feature article in Scientific American, which called it an iconic example of Victorian Queen Anne style. The current owners were able to obtain the original plans from that 1893 article, and they got more information in another article about the house published in the New York Times in 1894. Through those sources and by reading physical evidence, they were able to bring back the original floor plan and proceed with an authentic restoration.

A Polychrome Scheme
The exterior required detailed thought and attention, first to restore the porch and mix of

building materials, and finally to take the house back to its original multi-color paint scheme. Extensive research and meticulous work qualified the house for listing on the National Register of Historic Places.

The palette takes cues from the given colors of oak, brick, and terra cotta. Scraping and analysis were used to determine the original paint colors and their placement. The autumn palette includes 1890s shades of ochre, burgundy, green, and gold. Paint colors were custom-mixed to match original samples.

A Note on Parquet Flooring
Every room in this house has a different pattern of wood parquet flooring. Parquet, a geometric arrangement of wood strips and shapes, dates to the Renaissance but is most famously associated with the 17th-century palace of Versailles in France. It was a floor only the wealthy could afford until machine cuts became available in the 19th century. By then, pieces of wood for the field or border were prearranged on a cloth backing; the wood was thick enough to take several (careful) future sandings. Very elaborate patterns and exotic woods can be found in Gilded Age mansions, but even working-class homes, generally in big cities, had parquet floors. The field pattern featured squares of narrow boards laid in a single or double herringbone pattern, or any of several basketweave variants, as well as more elaborate patterns recalling French precedents. Border designs range from plain stripes and ribbons to Greek key or fret designs, trompe-l’oeil blocks, diamonds, stars, interlaced squares, etc. Oak is the most common wood, but borders were worked in walnut, cherry, maple and so on for color.

Since the 1970s, the word parquet has been used to describe an inexpensive, very thin flooring tile, often laid like linoleum in rental units. Thin wood parquet cannot be refinished by sanding, and of course laminate flooring is, well, not real wood. Several wood flooring manufacturers offer real wood parquet today for glue-down installation; look for a thickness of at least 7/16″. 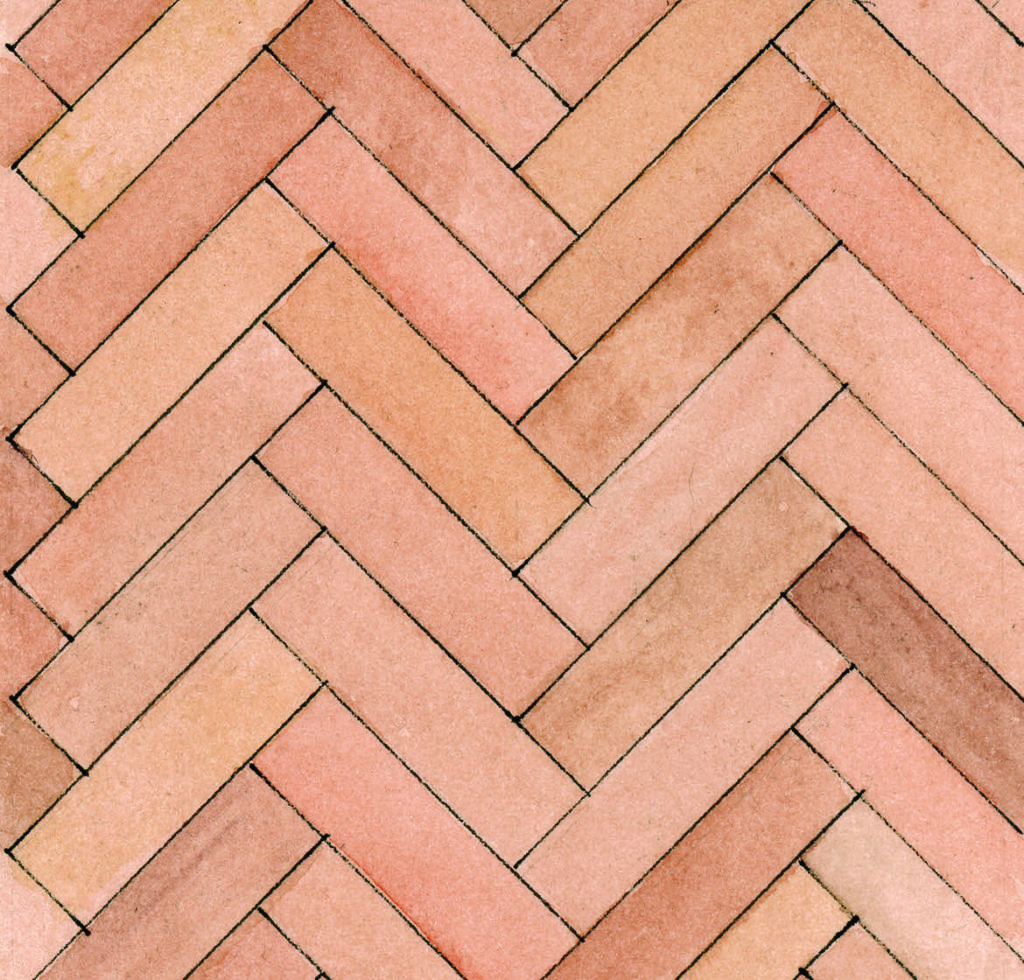 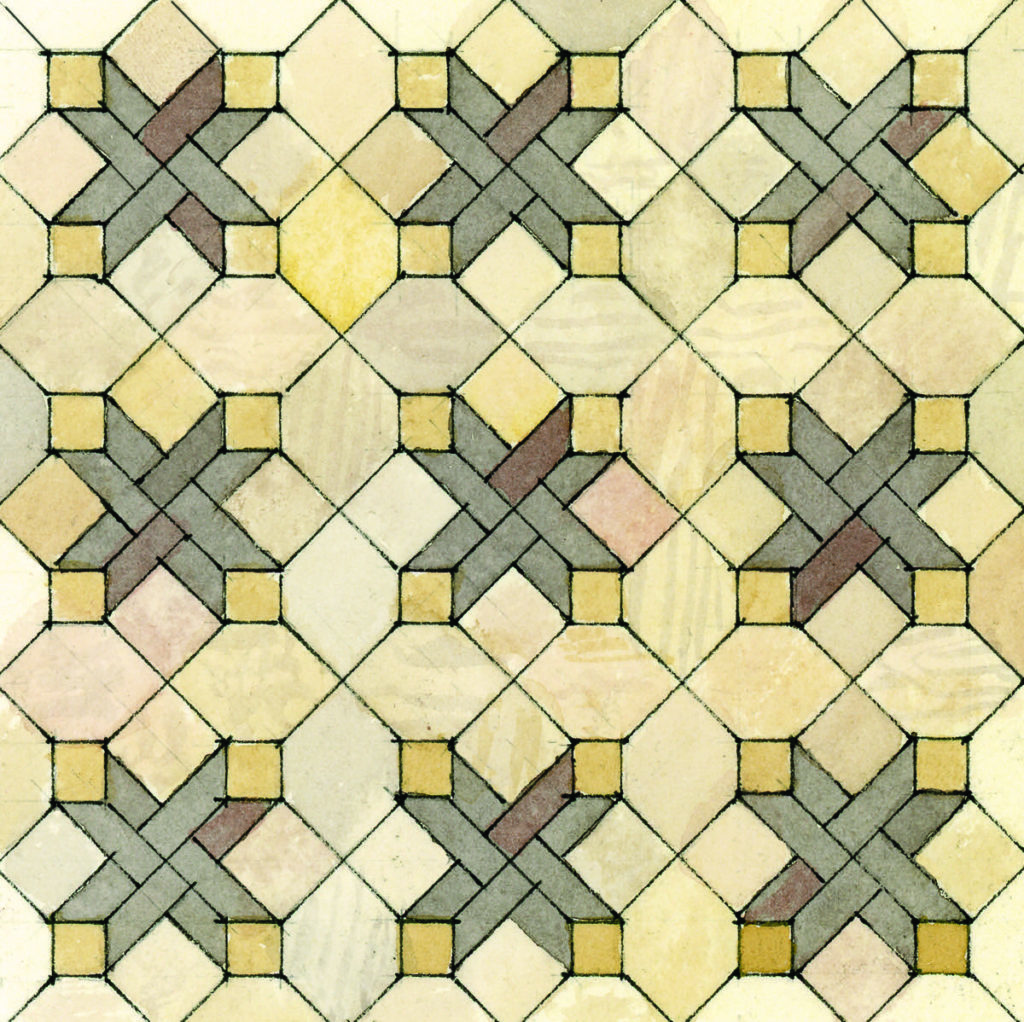 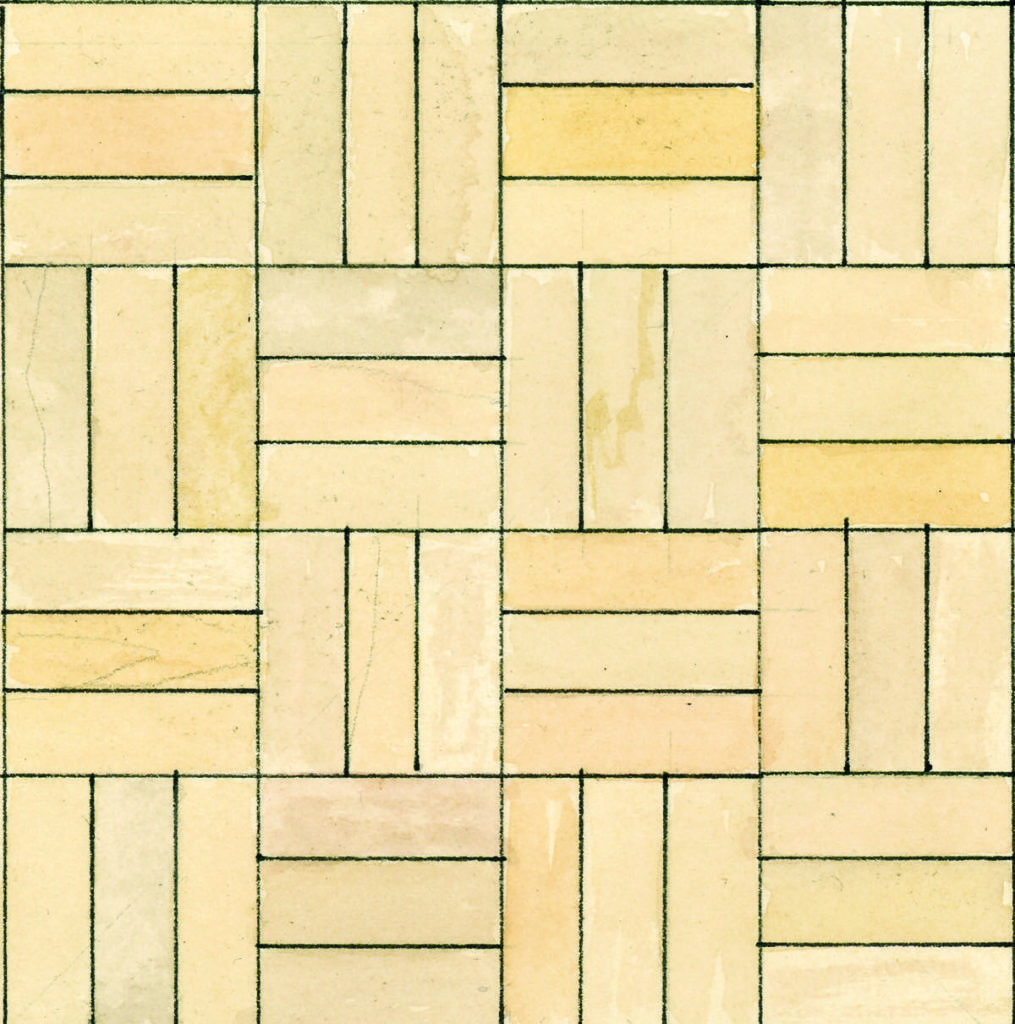 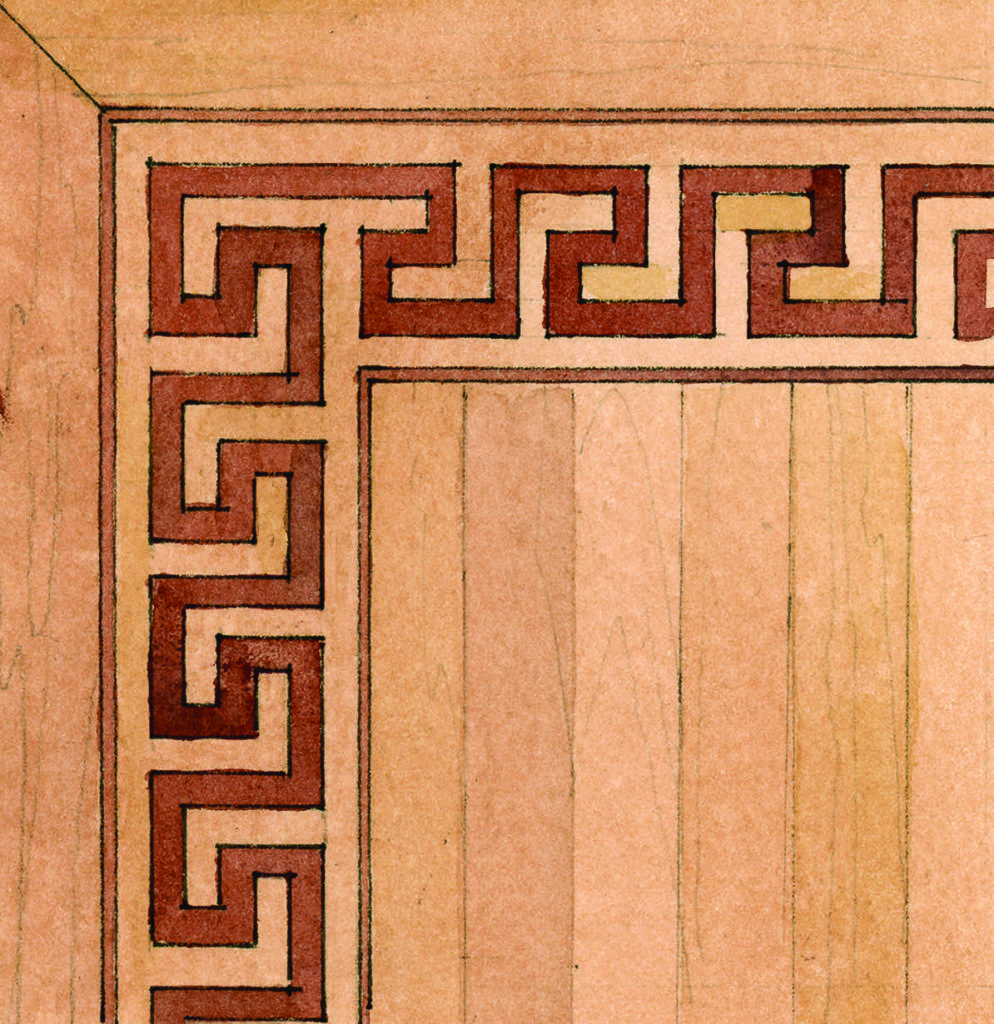 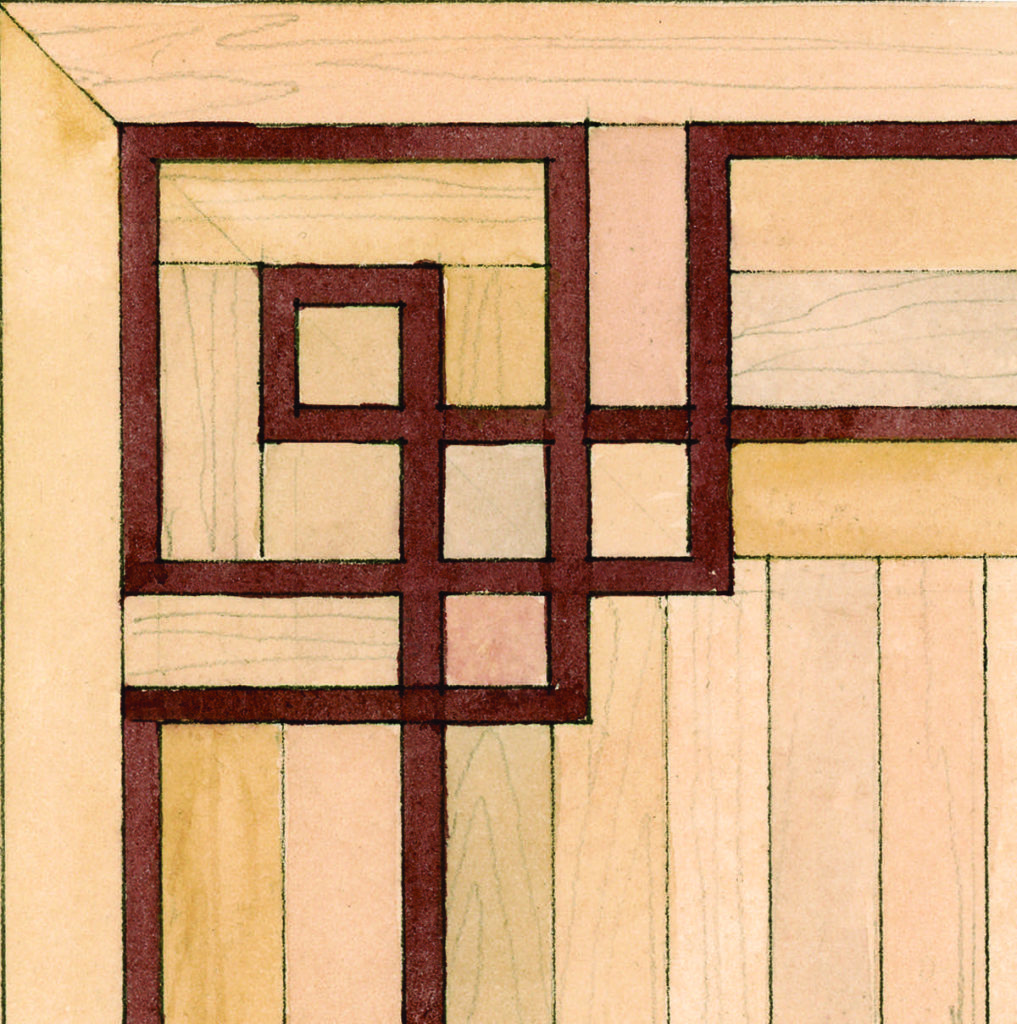