In its massing, pitch, and in the material you choose to cover it, the roof is a big indicator of house style. If you have a true colonial-era house (say, a New England Georgian), or a gambrel-roofed Dutch Colonial Revival, or a Shingle Style house, better stick with wood shingles or a close modern approximation! Mission Revival? Clay tile. Upstanding Tudor? That would be slate. The right roof is more than icing on the cake when it comes to architecture.

If more people took note of roof morphology, we’d have less remuddling and fewer heinous house additions. Let’s review how roofing evolved. Homes built by early colonists in the First Period (1625–1725, roughly) were simple, one- or two-storey structures with a center chimney and asymmetrical, steeply pitched roofs—necessary in New England to shed snow. The roof had little overhang (eave depth). Roofs of the 17th and 18th centuries typically were covered by cedar or pine shingles.

By the early years of the 18th century, the influence of Palladian classicism and the work of English architects Inigo Jones and Christopher Wren had circulated through the Colonies. Symmetry, proportion, and classical order were the hallmarks of the Georgian Period (1700–1780). Roofs were strictly symmetrical with paired chimneys, gabled or gambrel or hipped. Cornices and ornamental detailing such as dentil moldings were popular; after 1750, additional restrained elements such as roof balustrades and front gables emphasized classical formality.

As the country prospered and urban buildings became more refined, so did their roofs. Those in the Federal period (1780–1820, locally to 1840) were characterized by cornices accented with dentil mouldings, sometimes even ornamented with swags and garlands. Elegant, low hipped roofs were clad in wood shingles, although expensive, as-yet imported slate was used for grander homes and commercial buildings. Low balustrades might be placed at the roofline or on a central deck.

Residential design and roofs became more elaborate in the 19th century as the styles we call Victorian took hold. Inspired by the beauty of picturesque villas in northern Italy, the Italianate style (1840–1880) was popularized by architects and writers such as Andrew Jackson Downing. Hipped roofs with wide, overhanging eaves were ornamented with brackets (often in pairs), and in fancier homes capped by campaniles, or square towers that rose above the roof line.

A lovely but less common style in America during the Victorian period was Gothic Revival (1840–1875). Inspired by the medieval cathedrals and buildings of England and France, these homes had vertical siding capped by steeply pitched roofs—the steep roof and multiple gables a hallmark of the style. Substantial, ornate bargeboards and trim accented deeply overhanging eaves.

All things French have long been considered the height of good taste, and Second Empire-style homes (1855–1885) are often elegant and sophisticated. Their mansard roofs (named for 18th-century French architect Francois Mansart) mimicked those of Paris. The mansard roof has a double pitch, at top almost flat, then descending in a steep, almost vertical pitch. The roof might be straight-sided, convex, or concave, and broken by dormers. These houses often had slate roofs, which might be ornamented with multi-color slates arranged in patterns. Roofs were clad, too, in wood shingles or even metal. Decorative iron roof cresting goes hand-in-hand with the style. 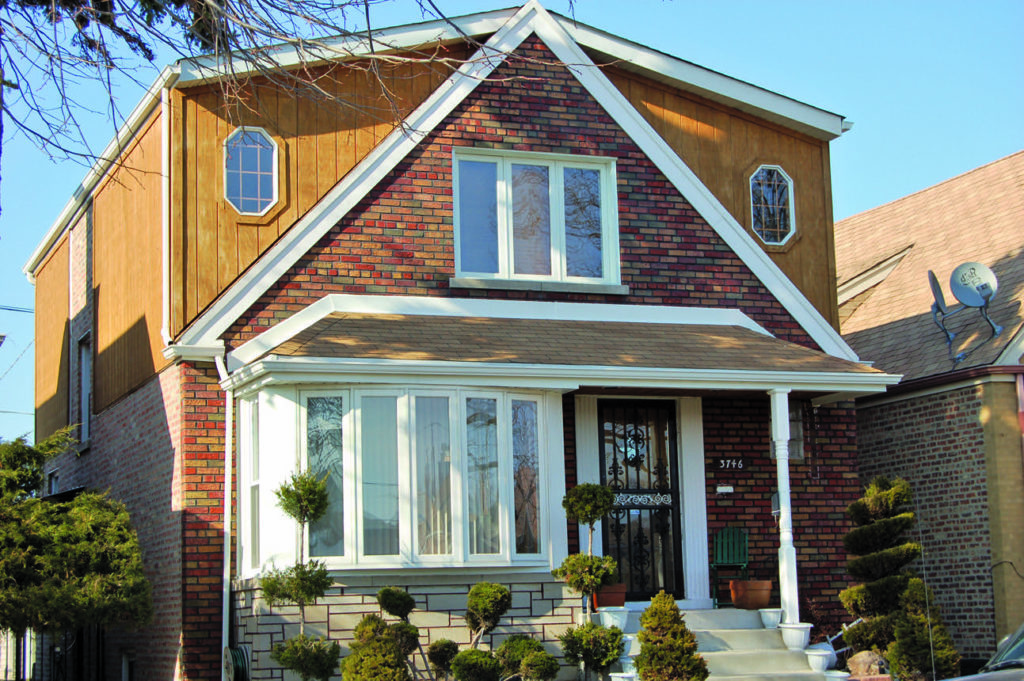 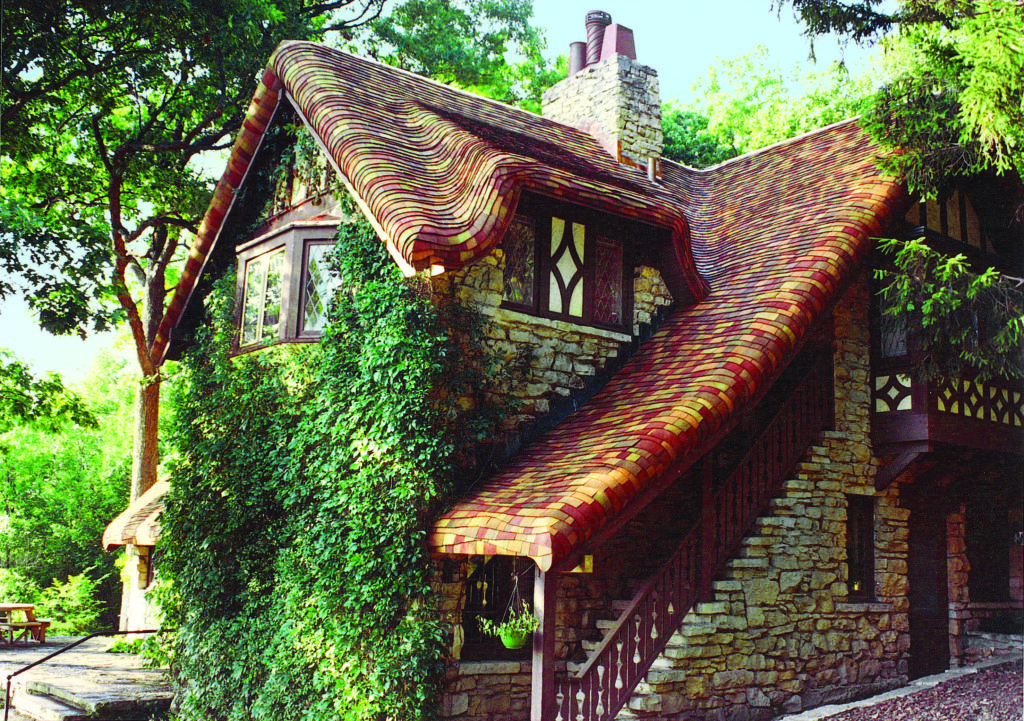 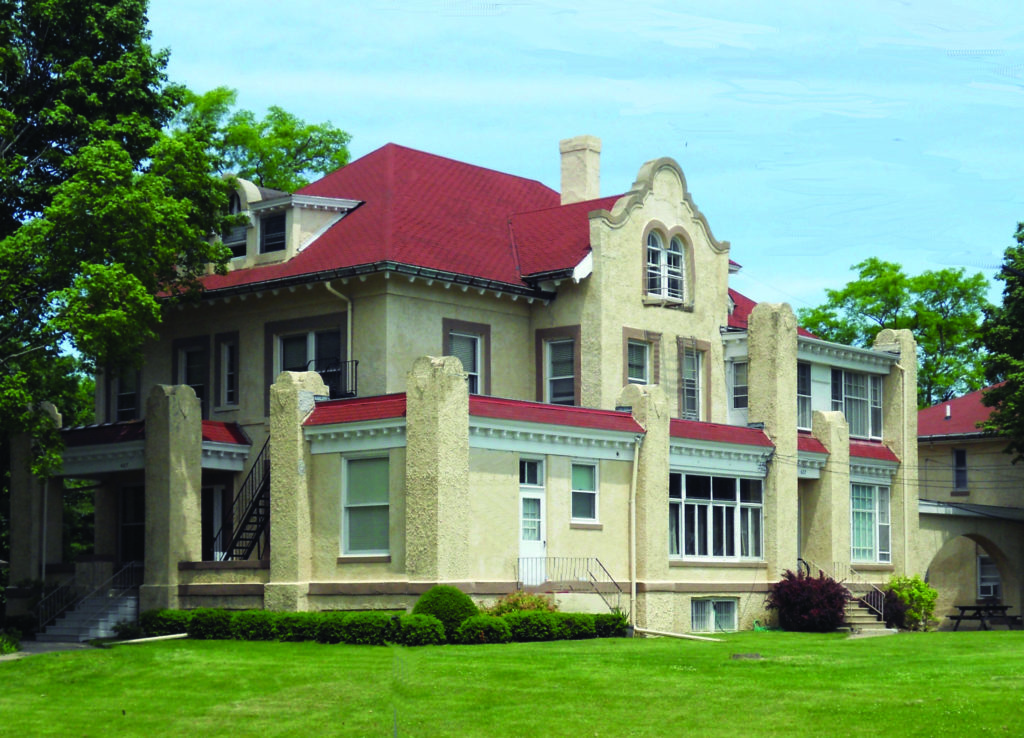 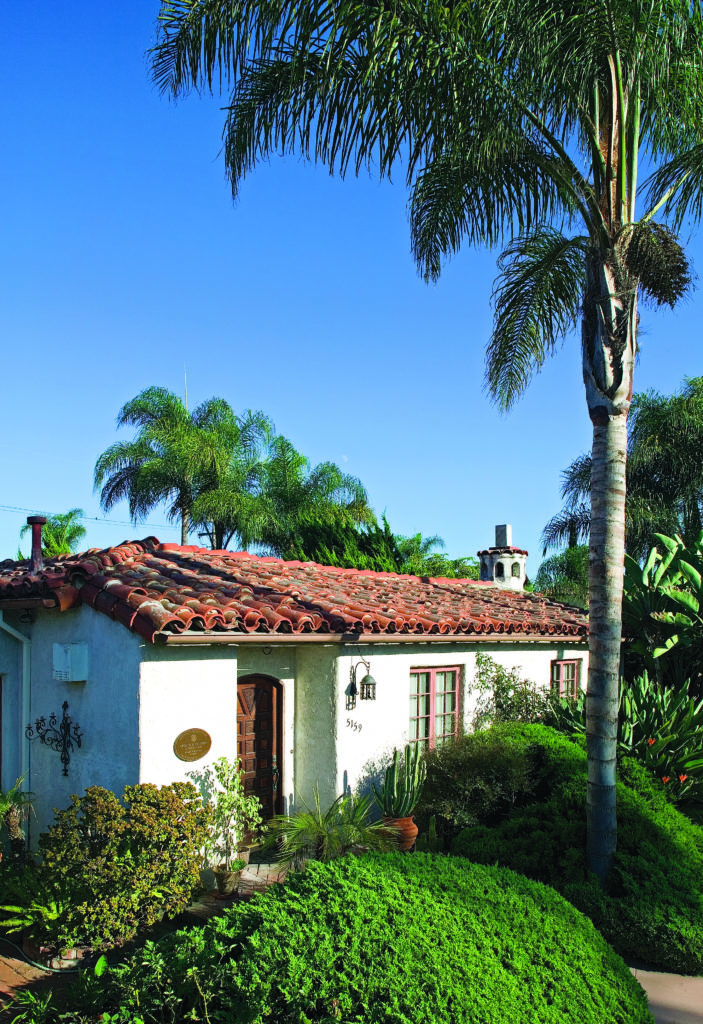 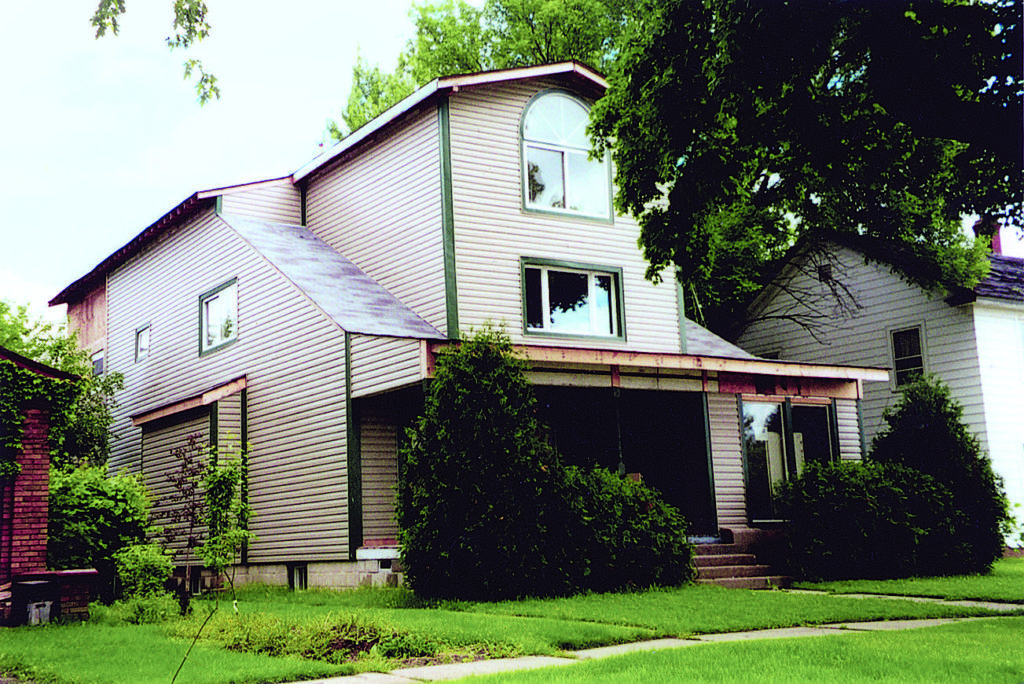 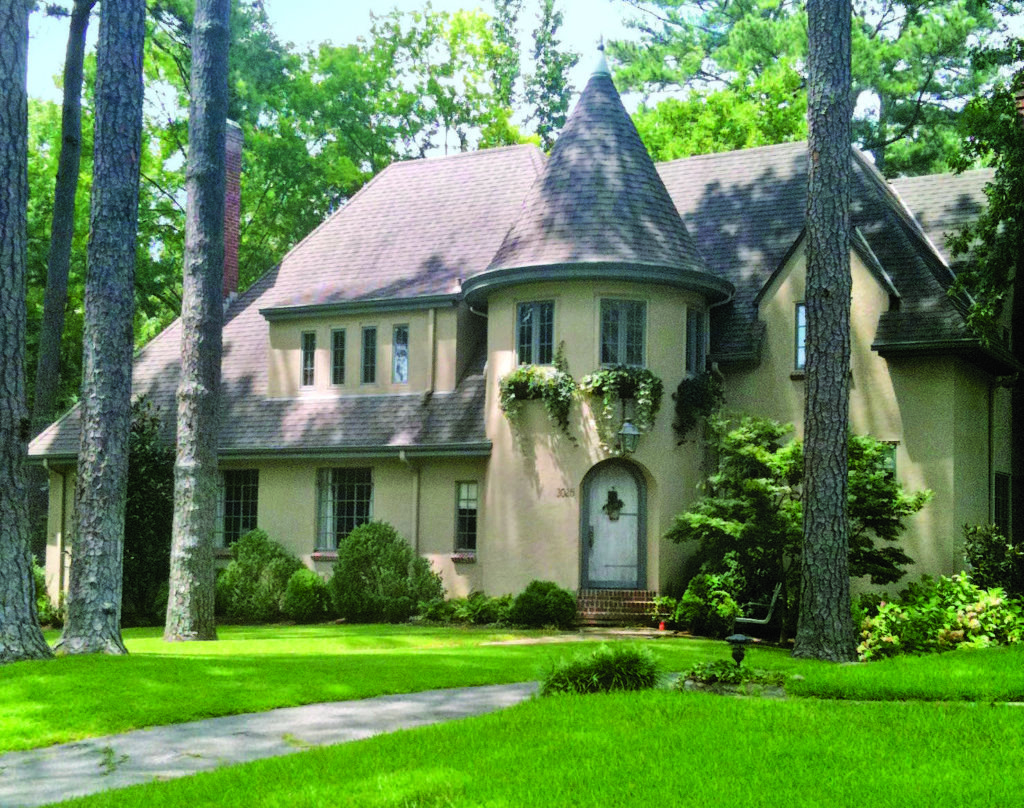 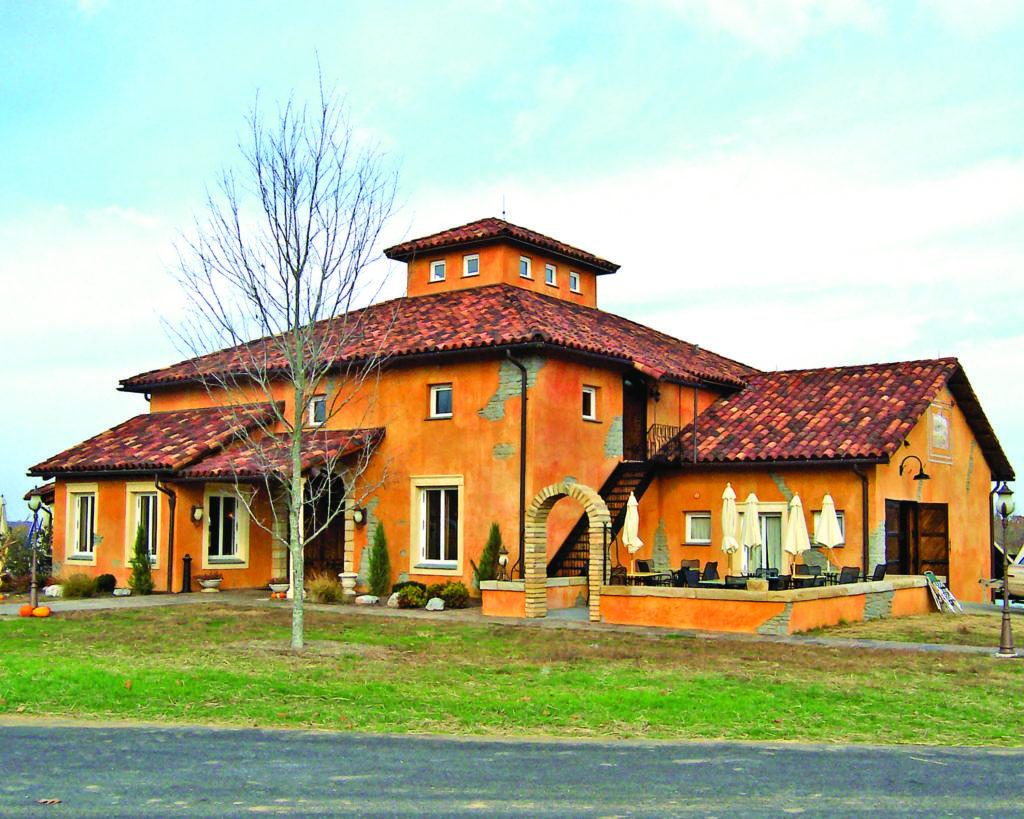 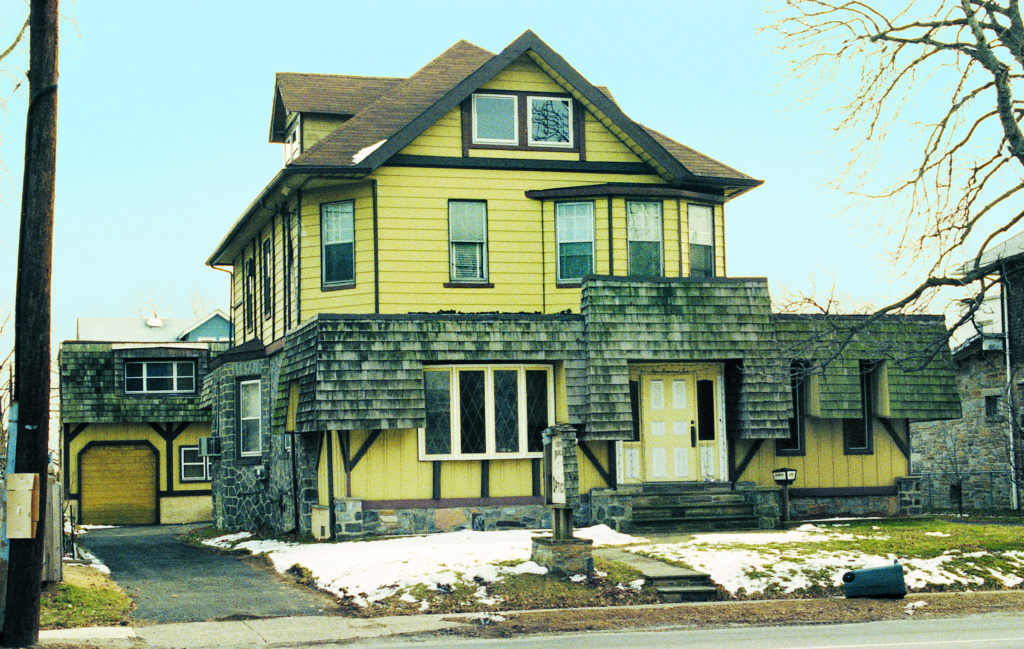 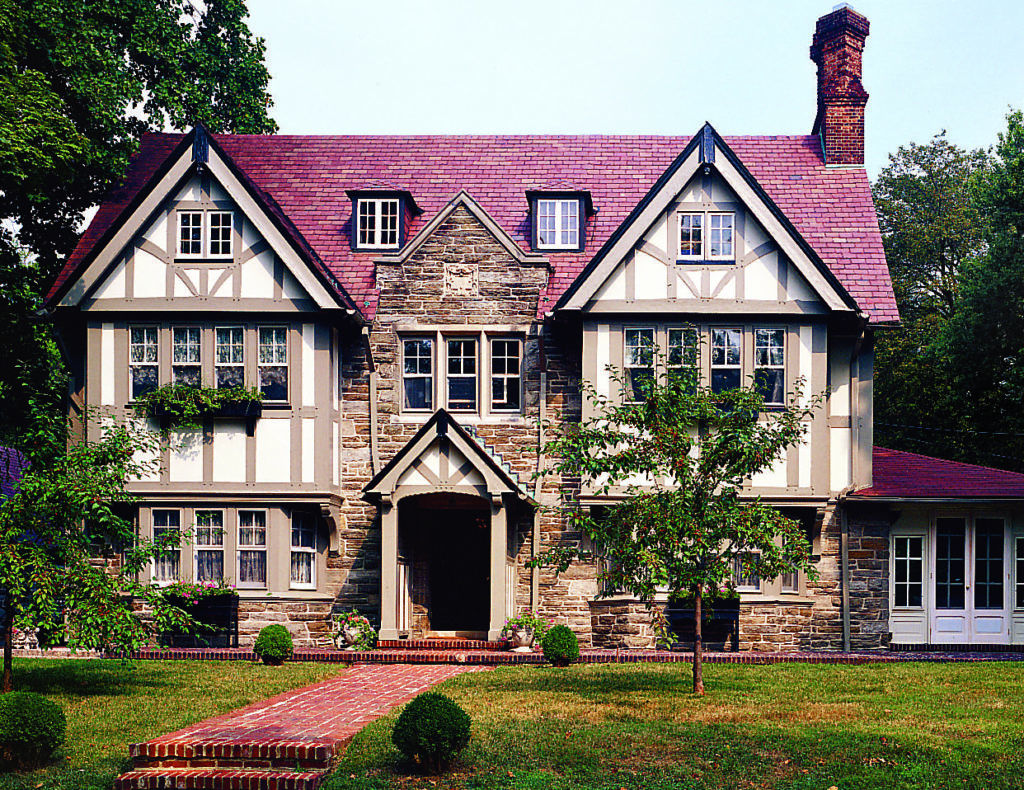 Following the Philadelphia Exposition of 1876 and publication of mail-order architectural plan books, the Victorian Queen Anne Style (1880–1910) spread across the country. Roofs, often rather steeply pitched, were as complex as the rest of the building, with multiple intersecting gables and protected balconies, bay windows, and a tower or turret. Wood (or slate) shingles were ornamented with bands of pattern that came from using multiple colors or fancy-cut butt ends: fishscale, sawtooth, inclined, diamond, arrow. Wood-shingle roofs often were painted rich red, green, or terra-cotta brown. With nothing left unadorned, the most fanciful Queen Annes had cresting marching along the ridge, ornamental masonry chimneys topped with terra cotta pots, gargoyles and weathervanes and fancy lightning rods with glass balls.

The ornamentation became overwhelming and a backlash ensued. The Shingle Style (1875–1910) was developed at first by New England architects who’d studied remaining colonial-era dwellings and were aware of similar historical trends in England. The style moniker comes from the relatively unornamented, undulating skin of wood shingles on walls and roof, sometimes combined with rusticated stone or brick. Shingle houses, typically large, have asymmetrical massing that might feature porches, arches, and towers. Obviously the roofs are complex; look for gambrel ends, hips combined with gables, and eyebrow dormers.

Next came the Colonial Revival (1880–1955), a sweeping movement brought about after the Centennial and stoked by nostalgia for the colonial past. On the best houses, roofs were shingled in slate, but asphalt shingles were developed in this period and became the most common roofing. Fanlights and sidelights embellished entries capped by a traditional gabled or hipped roof. A romantic variant was the Dutch Colonial (1900–1940), virtually a new suburban style featuring cottage and colonial details and, most importantly, a gambrel roof, often with flared eaves.

Concurrent with the stirrings of the Colonial Revival, the American Arts & Crafts or Craftsman style (1900–1929) espoused a return to nature, simplicity, and “honest” construction within the vernacular. The small but exotic bungalow—not only in California but also as imagined by Prairie School architects in Chicago and Gustav Stickley himself—was the darling house form, featuring low-pitched, ground-sweeping roofs with broad overhangs supported by knee braces or brackets and visible rafter tails. The roofing material of choice was wood shingles, but many bungalows and Craftsman homes had roofs covered in asphalt composition shingles in walnut brown, clay red, or moss green; tile and slate were used in some regions and to evoke Spanish or English antecedents.