An unassuming gabled Victorian on Long Island, the house was built ca. 1856 by Edward Howell, a Hamptons whaling captain. The house stayed in his family until the late 1970s. Set on three acres of orchards and farmland, it had never been significantly altered. The designer Ann Pyne came upon the property on a grey and blustery day in the fall of 1983, and she immediately felt at home.

Ann Pyne is the daughter of legendary interior designer Betty Sherrill, the late chairman of McMillen Inc., New York City’s oldest continually operating design firm. Ann says that her mother humored her but never truly understood the love her daughter developed for the 19th-century antiques she collected to furnish the simple Victorian house.

The old house had been maintained by the Howells and just needed freshening. An appropriate William Morris pattern replaced striped wallpaper in the front parlor. The dining room became a leafy bower with the installation of a Louis Bowen wallpaper with undulating bands of pale-green roses. Systems were, of course, updated, but the original hot-water radiators still work.

Early renovation included the kitchen, a straightforward room with beadboard walls and cabinet fronts, and updated appliances. The ceiling, 10 feet in height, gave the room a stunning Victorian Revival presence when Ann papered it with Bradbury & Bradbury’s Morris-inspired pomegranates. At this point, Ann and her family settled in, and little else changed for 30 years.

Ann Pyne, who came to McMillen Inc. in 2002 and is the firm’s president, had inherited her mother’s eye for color and design. But her embrace of Victorian hadn’t been immediate. She recalls her first visit to a dealer in 19th-century antiques, when, dismayed by the “heavy, ugly” furniture, she bought an overstuffed Turkish armchair, the least offensive piece, and left. 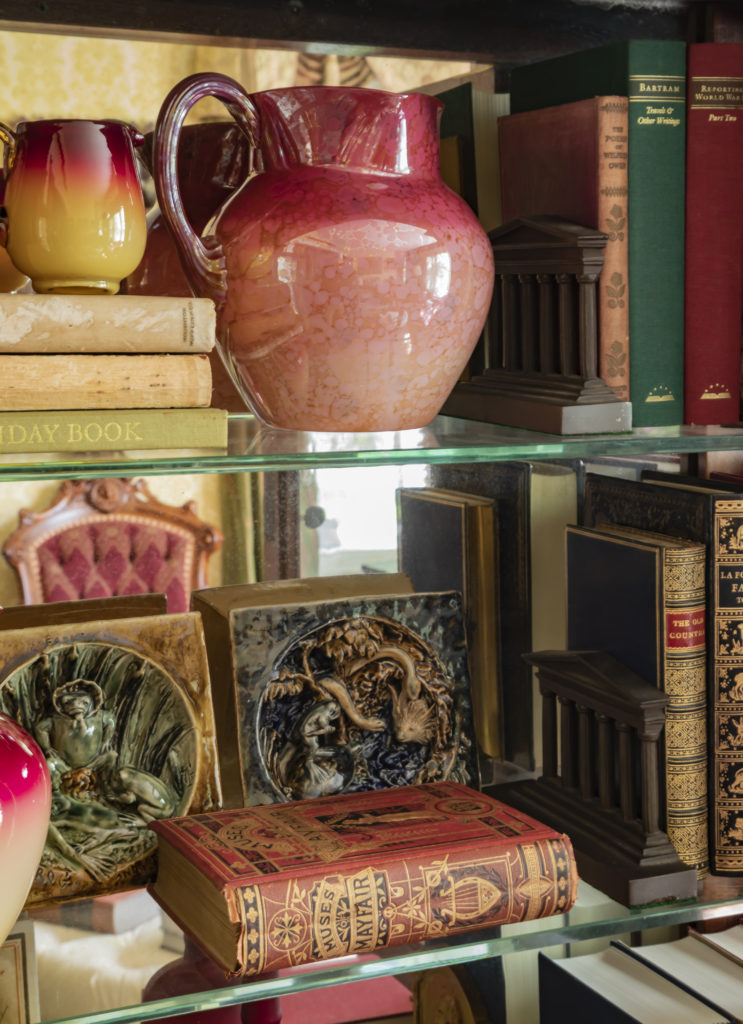 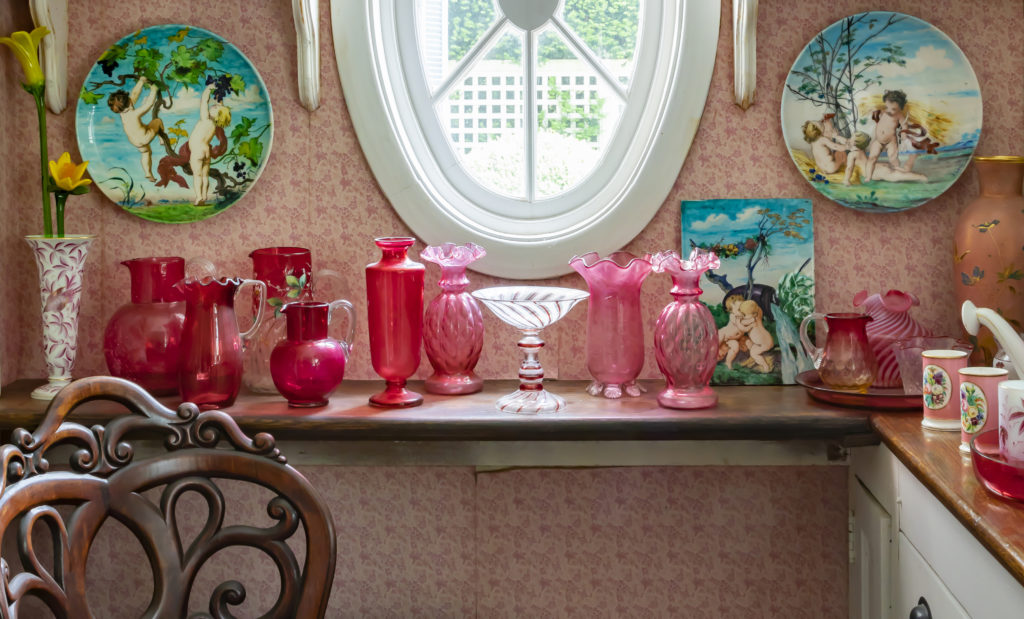 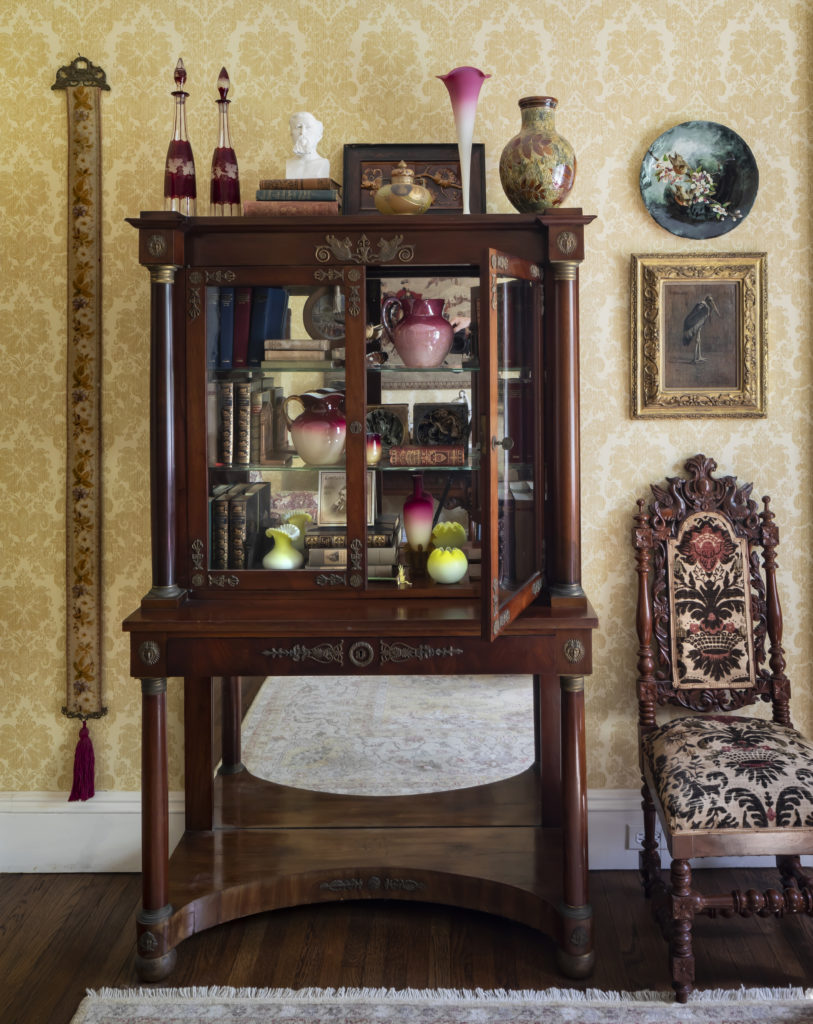 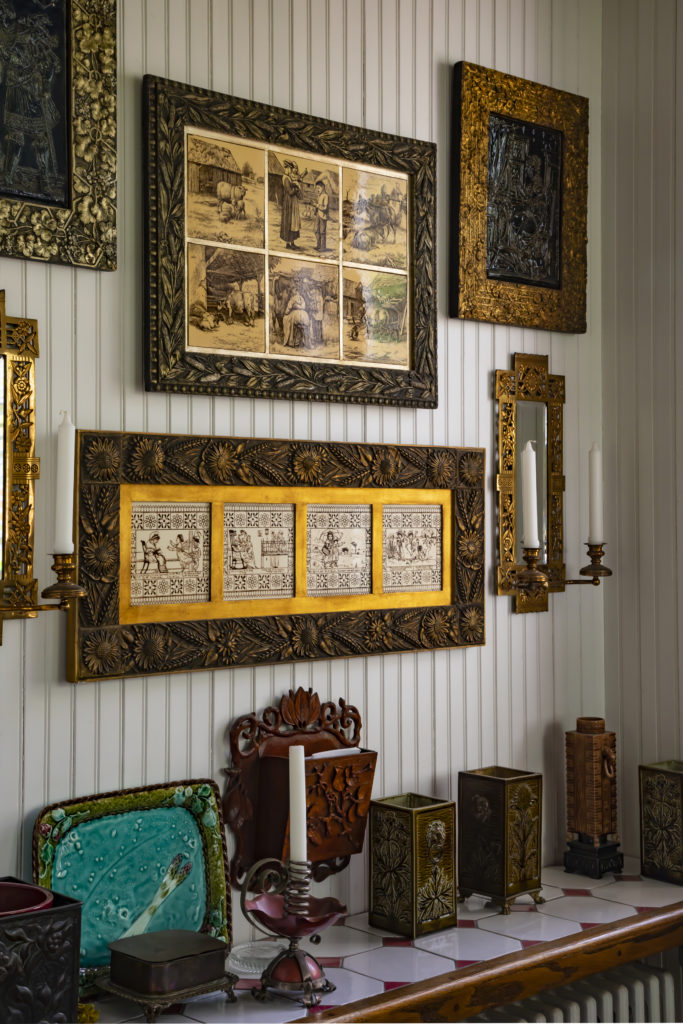 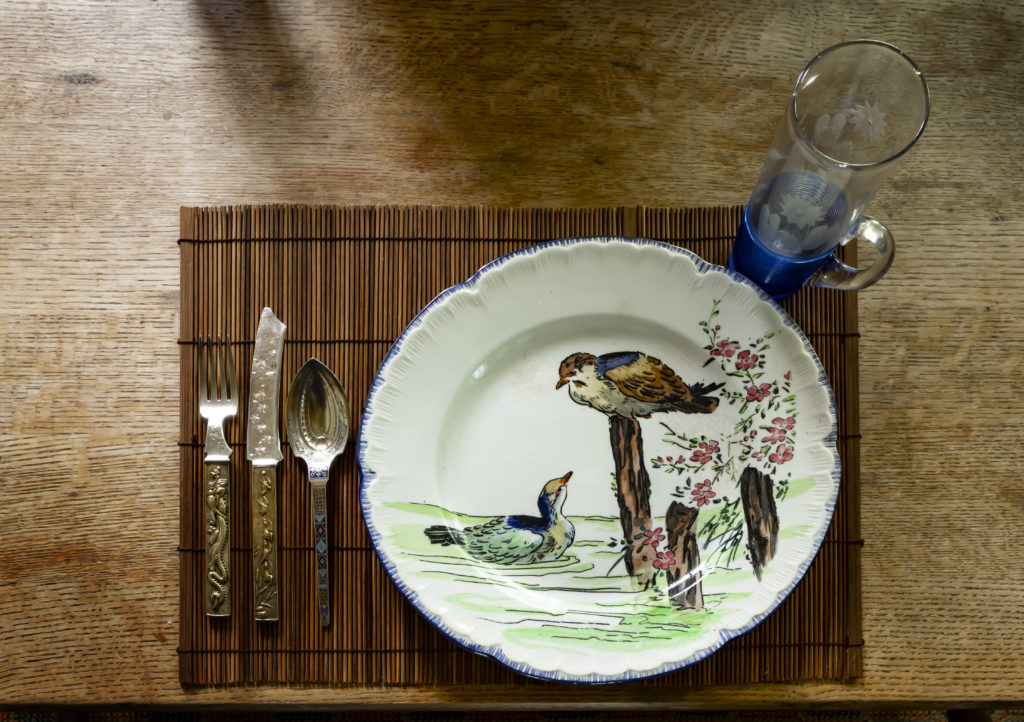 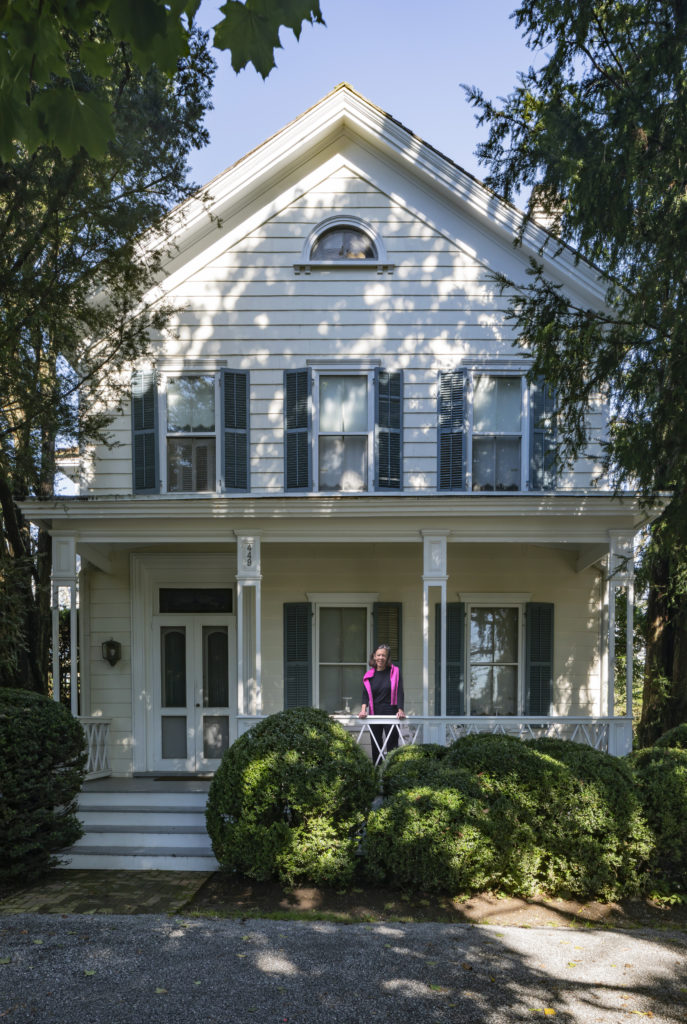 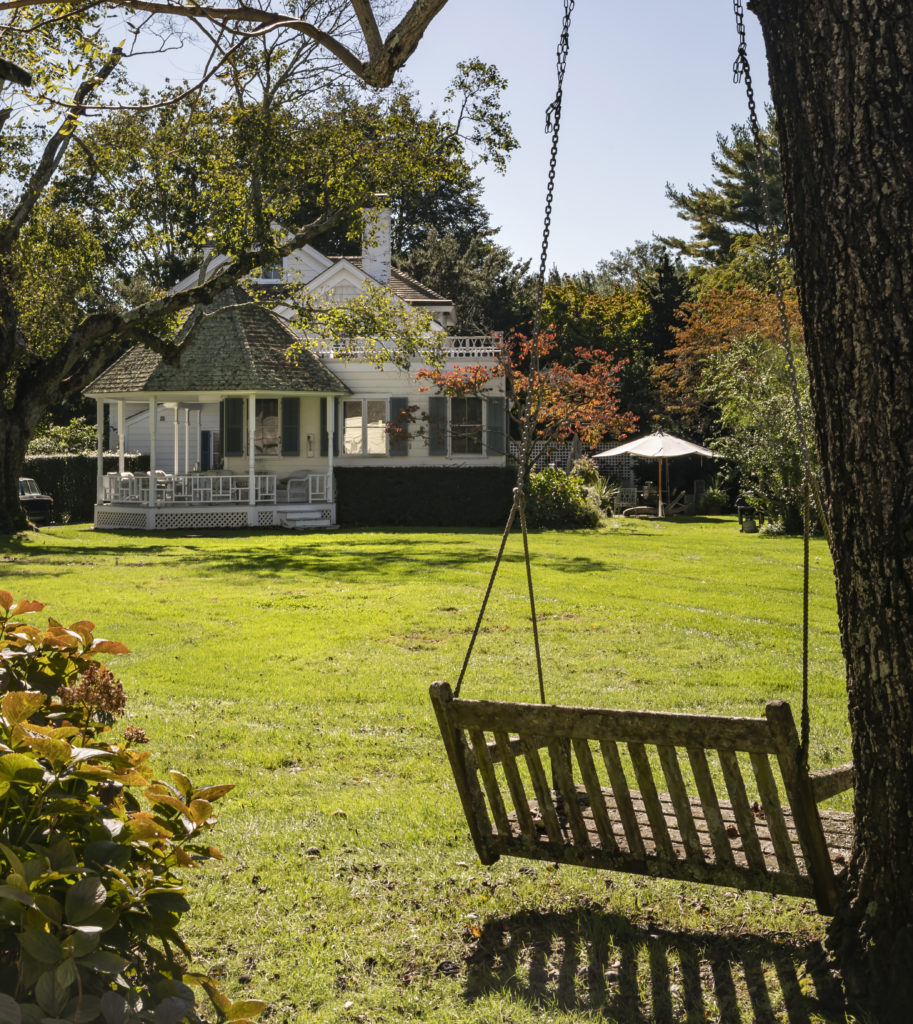 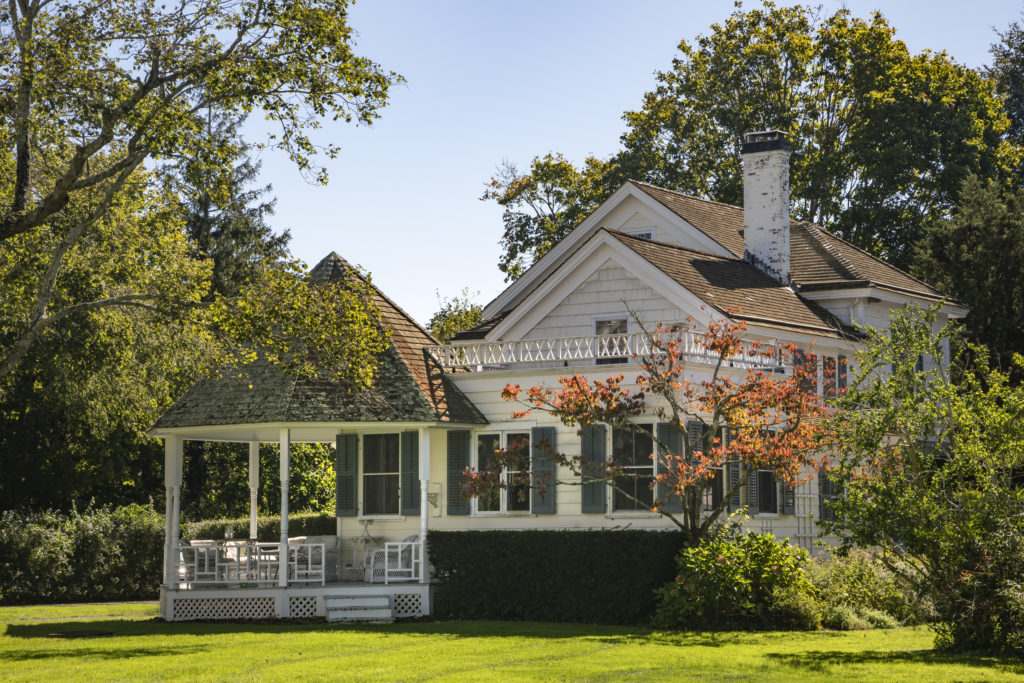 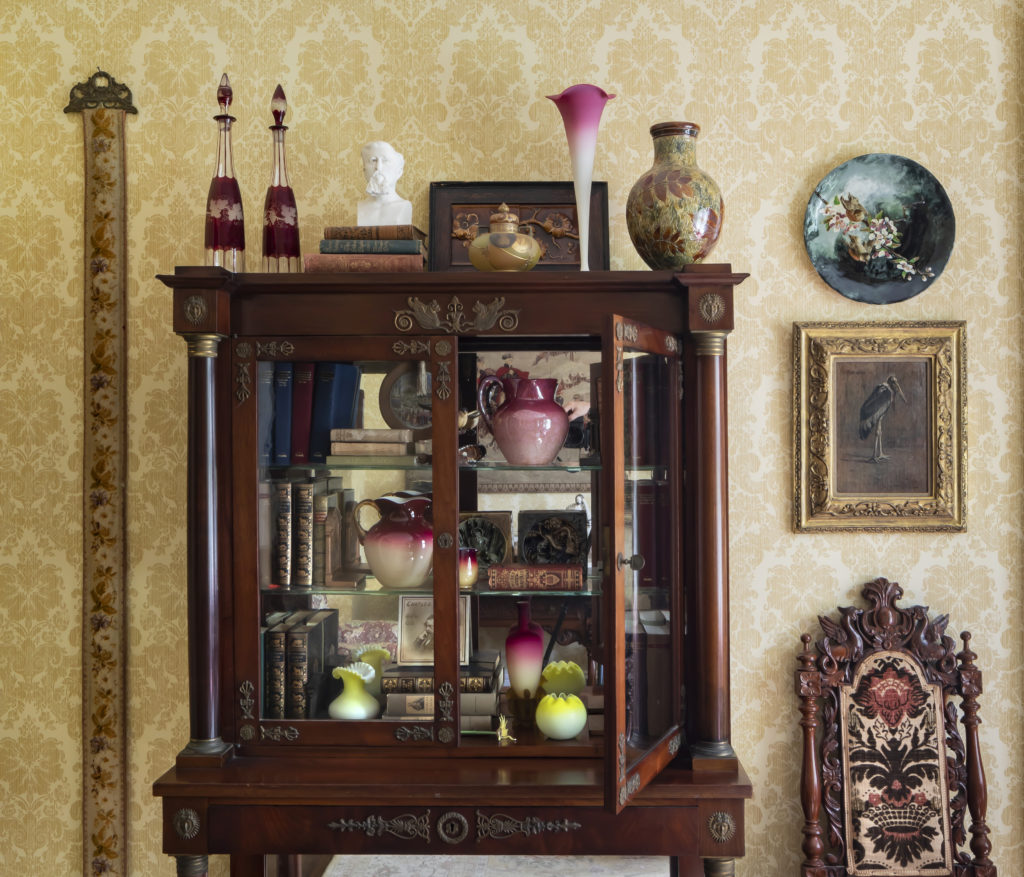 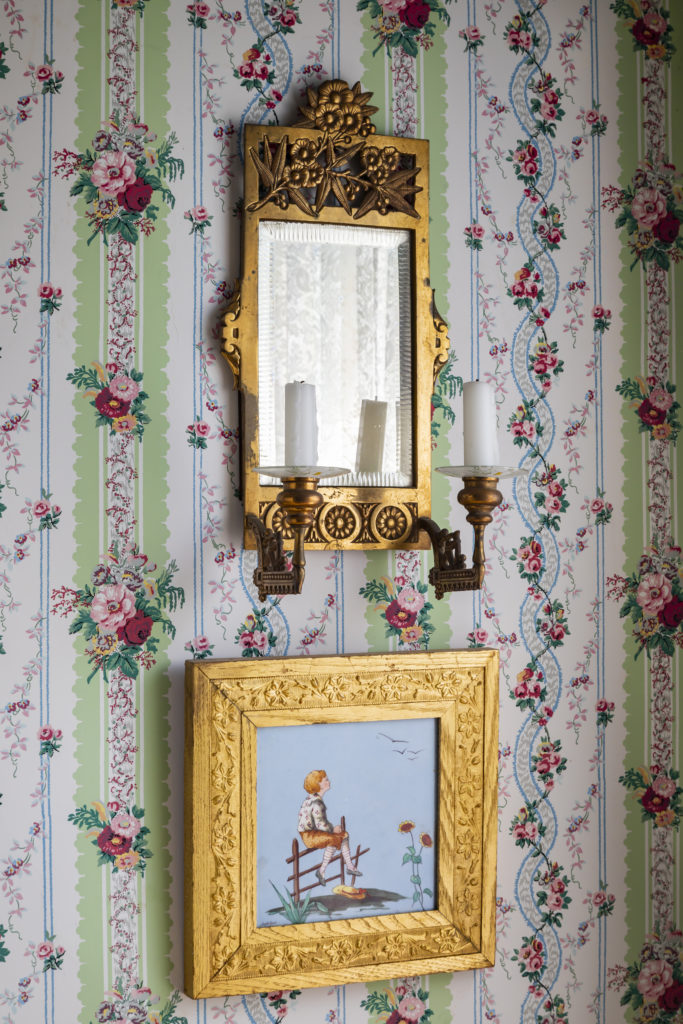 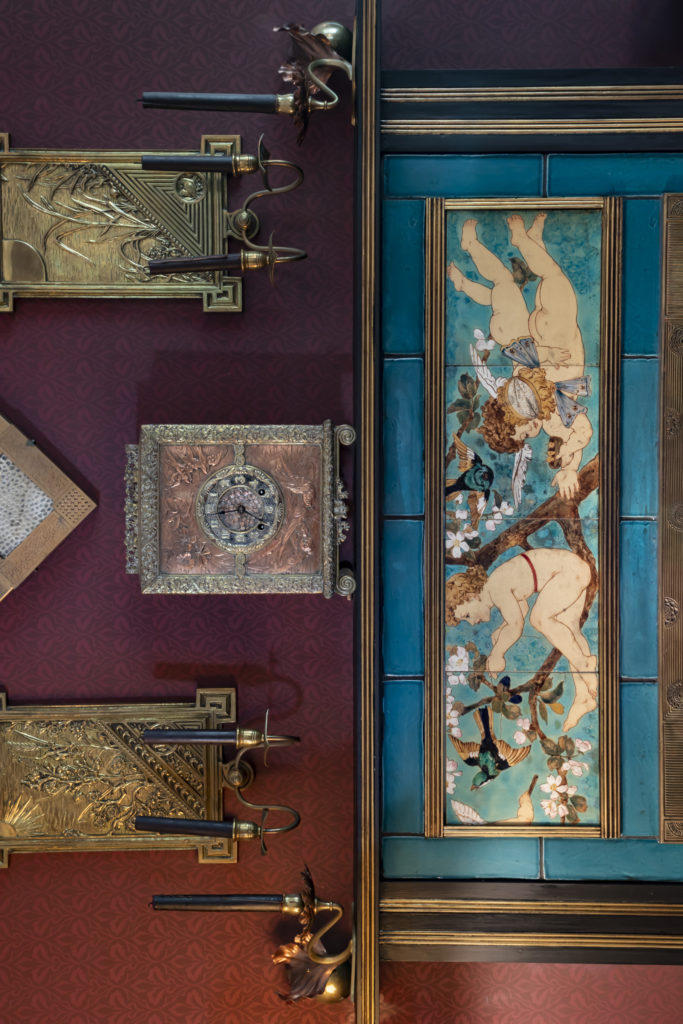 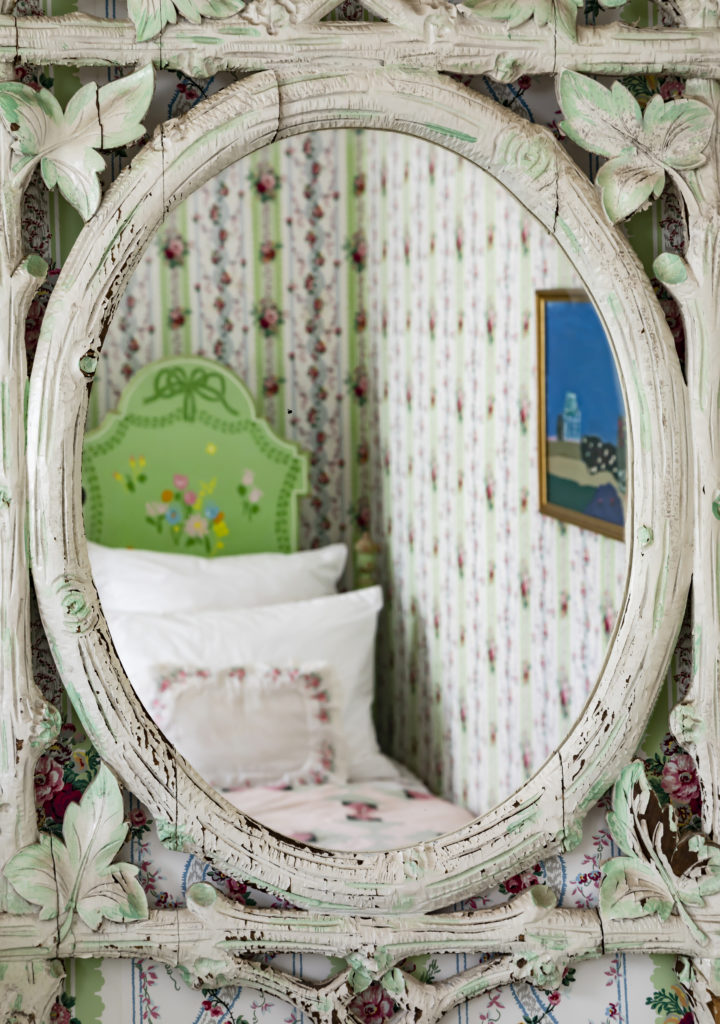 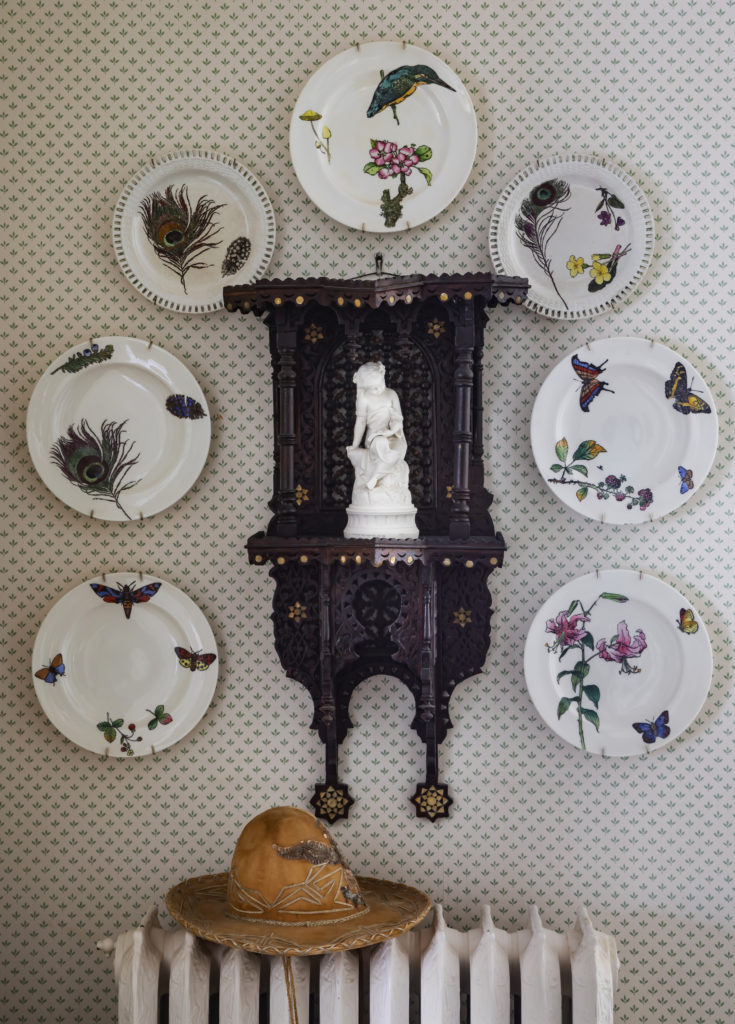 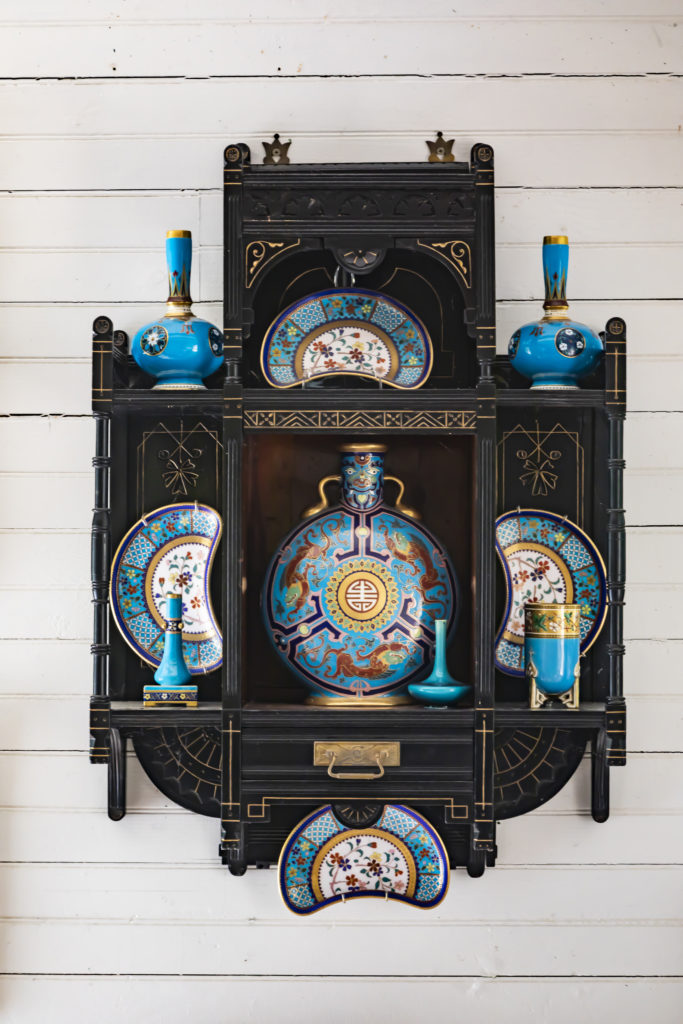 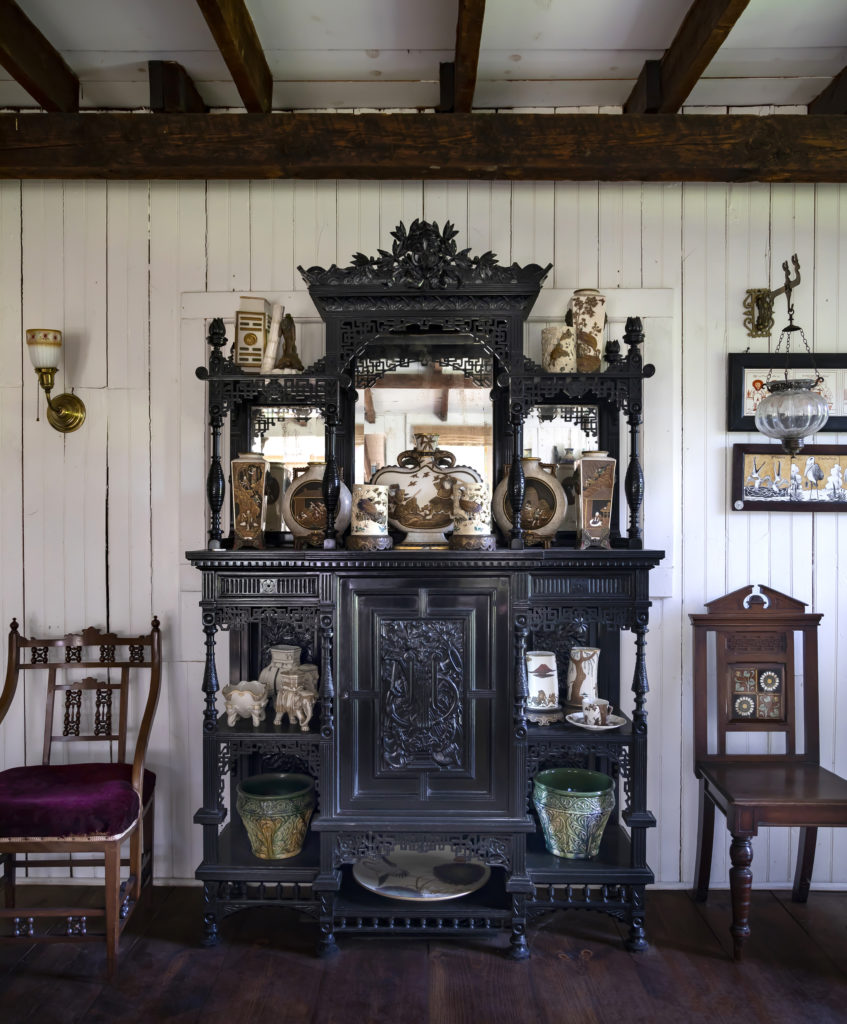 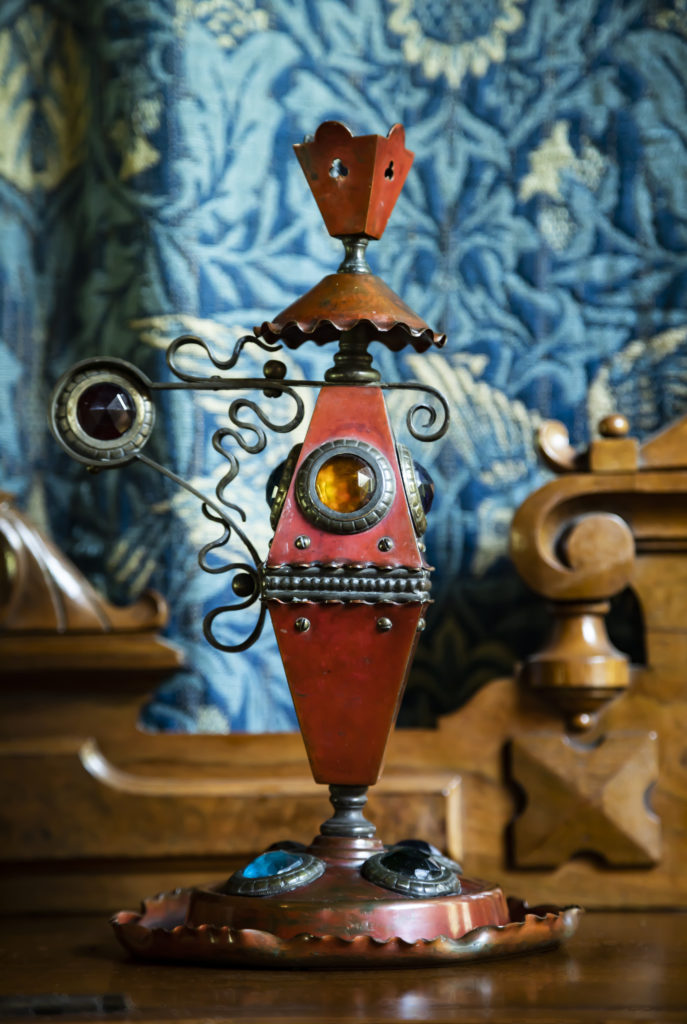 In the years that followed, Ann researched the styles of the late 19th century, meeting dealers and attending shows and auctions. Taking her grandmother’s rosewood Rococo parlor suite as her starting point, she began collecting, and decided to furnish each room as an example of a particular style.

Bitten by the bug, Ann Pyne continued to acquire antiques and so turned to renovation of the ample barn. With an assumption the space would be used for children and grandchildren, the two main rooms were painted a neutral white and stabilized with new pine floors. The upper loft retains the smell of hay. The stage was set for the display of collections with a British focus, of both Aesthetic and Arts & Crafts design. Ann admits that the grandchildren were soon asked to play elsewhere, after she found that drinks spilled in the loft had left a sticky film on a row of museum-quality, George Tinworth ceramic bible maquettes atop a bookshelf.

The smaller dining room is traditionally furnished with a French Provincial table, and Sheraton-reproduction chairs that came from the owner’s grandmother. Parian classical figurines rest on an Empire pier table.

The Stark carpet with sprays of roses was one of legendary French interior designer Madeleine Castaing’s favorites. Blue-and-white Anglo–Japanese ceramics including a pilgrim’s flask and a pair of vases add an elegant accent on the table.

The library–parlor includes a récamier designed by Ann Pyne; a Kimbel & Cabus desk that was a gift from her father; an ebonized Eastlake-style wall shelf; and Renaissance Revival armchairs with carved crests. Elsewhere in the room, an Empire Revival bookcase holds fancy bound volumes, George Tinworth frog and mouse tiles, and peach blow jugs and vases, ca. 1880. Rounding out the furnishings is a Jacobean Revival side chair purchased at Farm River Antiques. The button-tufted Renaissance Revival armchair is upholstered in fabric by Old World Weavers.

The more formal parlor, a sitting room off the dining room, is done in Rococo Revival fashion. The room has a delicately carved Meeks rosewood parlor set as well as a substantial center table the owner dubbed “the Queen Mum.” American oil paintings hang on the walls. Beyond is a glimpse of the Aesthetic Parlor.

A Pantry For Collectables

The ceiling by Bradbury & Bradbury Art Wallpapers sets an Aesthetic tone in the kitchen, which became an odyssey into Anglo–Japanese design and its whimsies. Low Art Tile clocks with sparrows and flowers occupy countertops, where one might expect a mixer. The table is laid with transferware plates depicting ducks and cherry blossoms; Gorham sterling flatware, with handles imitating Japanese bronzes, crawl with bugs and butterflies. Anglo-Japanese table settings include polychromed, French transferware plates and Gorham sterling ‘Kozuka’ flatware with bronze handles inspired by Japanese kozuka (short, decorative blades often attached to longer swords).

On the wall, an assortment of brown-and-white, Aesthetic Movement transferware tiles have gilded, late-19th-century frames.

Bedrooms upstairs befit a country house, yet they showcase good examples of Modern Gothic furniture. A muscular Hunzinger chair sits next to the bed in the master suite, which is furnished with an upholstered day bed and wicker and faux-bamboo pieces. Pale walls and floor keep the room casual and contemporary.

Collections in the barn have a British focus, with both Aesthetic and Arts & Crafts designs: an ebonized wall shelf set with exotic. blue-and-white Minton ceramics by Christopher Dresser; an étagère crowded with gilded Royal Worcester pilgrim flasks and vases.

The front of the main room is furnished with a parlor set from Ann Pyne’s grandmother. Along with Aesthetic Movement tiles and ceramics, it makes an eye-catching contrast to the rustic setting. At the other end, rare romantic tiles by Henry Stacy Marks glow on the wall above a painted pine bed. The ca. 1873 tiles depict the seven “Ages of Man.”