The Louisiana vernacular meets suburban bungalow in this well-tended house in Lake Charles, in the southwest corner of the state. Its low gabled roof overhanging a spacious porch, horizontal windows, and exposed rafter ends are bungalow basics; the straight-through center hall recalls shotgun houses. Inside, the treatment is more cottage than Craftsman. Early 19th-century country furniture and pieced quilts join up with an English-inspired dining room and a collection of Arts & Crafts pottery.

“Antiques and handmade furniture were embraced by William Morris, and are in the spirit of the Arts & Crafts movement,” says Barbara Wyman. With two children and a collection of 18th- and 19th-century American antiques, she and her husband, Bruce Wyman, bought the house in 1989. They found plenty of original elements in the 1920 bungalow: the front porch, handsome woodwork, the fireplace, pine floors, divided-light windows and transoms. But it had been a rental property for 40 years and suffered from neglect. A fire had caused damage to the attic and back bedroom, which needed new windows. Burn marks remain on portions of the bedroom floor; that’s “character,” says Barbara. 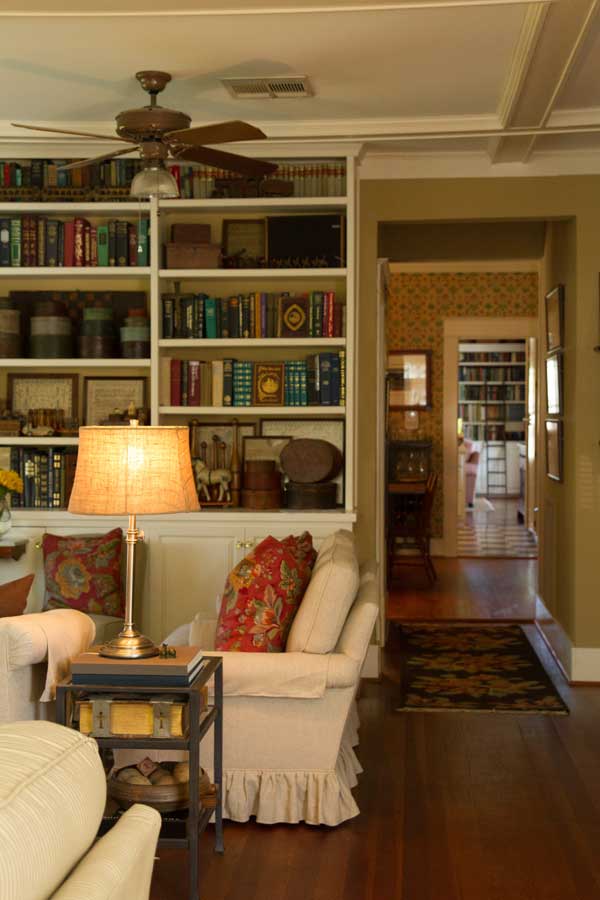 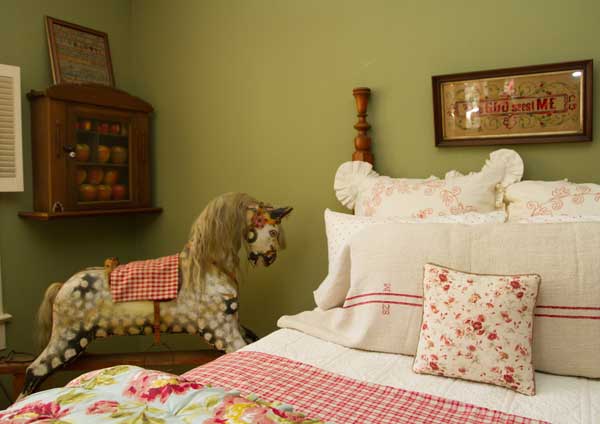 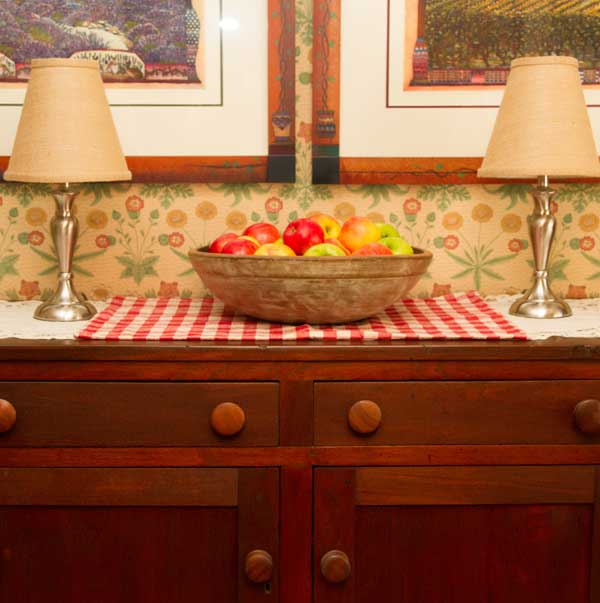 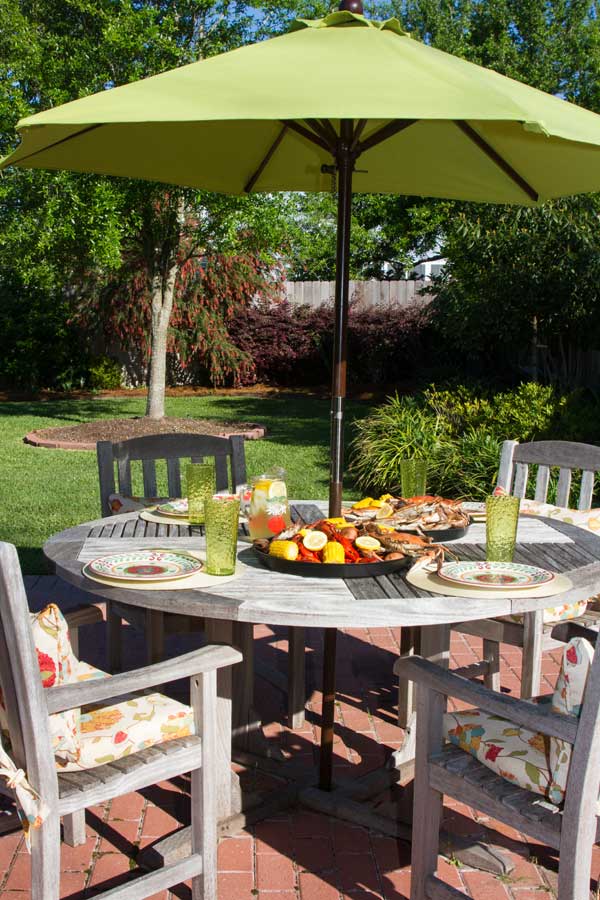 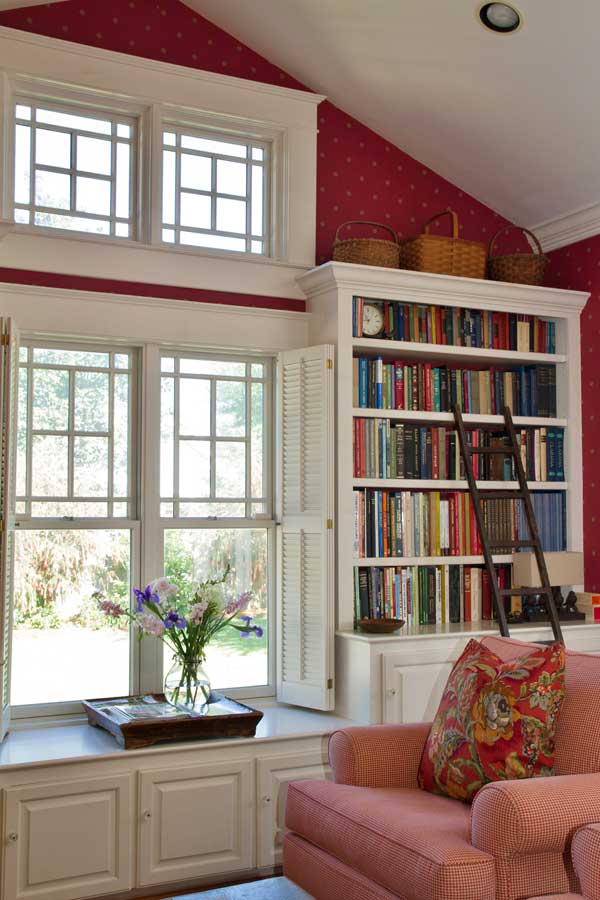 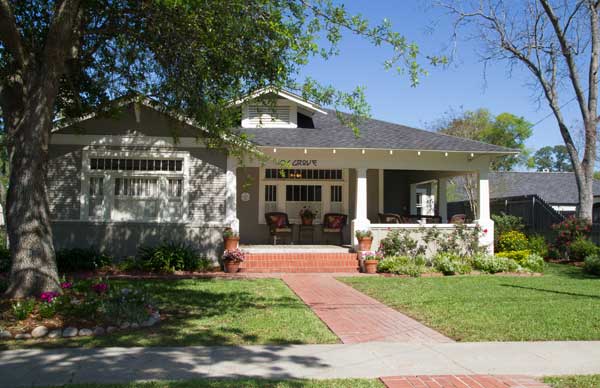 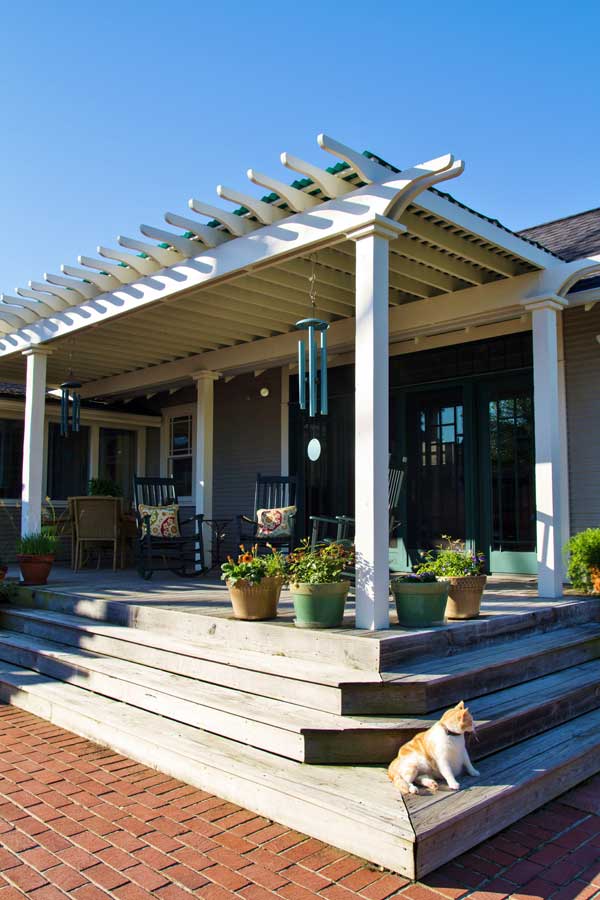 The Wymans managed repairs and renovations but hired the work out. They pulled away shag carpeting and installed central air conditioning. A big job was extending the kitchen on the rear of the house, adding a family room at the same time. The Pella Architect Series windows echo the original windows on the front of the house. Their carpenter took great care to replicate the house’s original trim when he framed the new windows and doors. The family room has heart-pine flooring purchased from a salvage dealer.

The kitchen extension opens to a back deck and pergola, which were added in renovations necessary after Hurricane Rita ripped apart the backyard in 2005. (Fallen trees caused damage to the front porch, too; Bruce acted quickly in covering the roof and having trees removed to prevent further water damage.)

The dining room underscores the eclectic, vernacular theme in the house. The cheerful wallpaper was one of English Arts & Crafts designer William Morris’s first patterns: ‘Daisy,’ which appeared in 1864 and is still produced today. The long, pleasantly worn table is a countertop from an old general store, ca. 1820, in Pennsylvania. The chairs are antique birdcage Windsors.

In the living room, the warm, neutral walls (painted in Benjamin Moore’s ‘Chestertown Buff’) and chestnut-colored flooring are complemented by crisp white woodwork. Aquatint etchings by the late California artist Gail Packer add color; a collection of English samplers adds history. In a small study, dark oak Mission furniture and McCoy and Roseville pinecone-motif pottery are set against walls in ‘Maryville Brown.’ Red and white bedding is a complement to the soothing, classic green called ‘Parsley Snips’ (Benjamin Moore) painted on the walls in two bedrooms.

Barbara became infatuated with Mary Emmerling’s Americana style in the 1970s and began collecting American antiques. The house has a unique blend of family pieces, 18th- and 19th-century antiques, and a few Eastlake, Mission-style, and Roycroft accents.
“This is the perfect bungalow,” Barbara says. “You see the fireplace as soon as you walk in, and you can see outdoors from every room.” The couple, who are both college professors, say they often entertain on the patio, setting out an old-fashioned Louisiana seafood boil piled high with crabs and crawfish.

The house is in the century-old Margaret Place Historic District in Lake Charles. It was one of the first modest-sized dwellings in the development. Houses in the area reference late Victorian, bungalow and Arts & Crafts, Tudor, and Spanish Revival styles, and run from elegant lakefront homes to modest cottages now shaded by mature trees.

A Stone Greek Revival in Ohio

Things to Do in Strasburg, Virginia