A single-storey Cape by the office of the Colonial Revival architect recently got unobtrusive additions that added space while knitting the house to a patio and the yard. “Two separate wings were kept secondary by their placement and scale,” says the Vermont architect Sandra Vitzthum. To the rear, she added a master suite over a drive-in workshop. A dining room was added off the side. Additions comprise 600 square feet.

“This is an unassuming house, but that was the idea,” Vitzthum explains. “Wills was a genius in re-creating the Colonial home for everyday Americans after WWII. He was the East Coast version of Cliff May, who dreamed up the California ranch house.”

The firm of Royal Barry Wills designed ordered and simple houses, most often furnished with such Colonial Revival conventions as Federal mantels, wing chairs, and antiques. This house was built in 1977, when architect Richard Wills was principal. “It’s a comfortable place to live,” agrees owner John Meyer, who collects work by Vermont artists—and who restores Model T Ford cars.

“Rooms ‘pinwheel’ to move you through the spaces, with the next axis coming into view,” the owner says. “I loved the house even before I knew its history.”

Wills’ revival houses nevertheless were modern, built with electric kitchens, ductwork, closets, and mid-century bathrooms. In fact, “what’s new, as we renovate these houses in the 21st century, is that the kitchens become more nostalgic, no longer frankly ‘modern’,” explains Vitzthum. The kitchen she designed in the original space is “refined without being showy; modest, like a New Englander.

“A Colonial kitchen would have had a substantial fireplace,” Vitzthum says, “so I used contrasting cabinets around the range and added tiles, to evoke a hearth.” The kitchen’s Delft tiles were specially ordered from Holland for the house.

Neither Colonial houses nor most of those designed in a New England revival style had much connection to the backyard. The neo-traditional stonework here is all new, connecting the new dining room to a patio and beyond to the yard.

Well designed and well built, the house was in near-original condition when John Meyer bought it in 2010—from the family of the builder. “I prefer an architecture of time and place. In New England, that’s classical, colonial. This house feels right,” he says. The utilitarian old kitchen was carefully removed and relocated to outfit the auto workshop, where Meyer spends the long Vermont winter restoring Model T Fords and the occasional Model A. 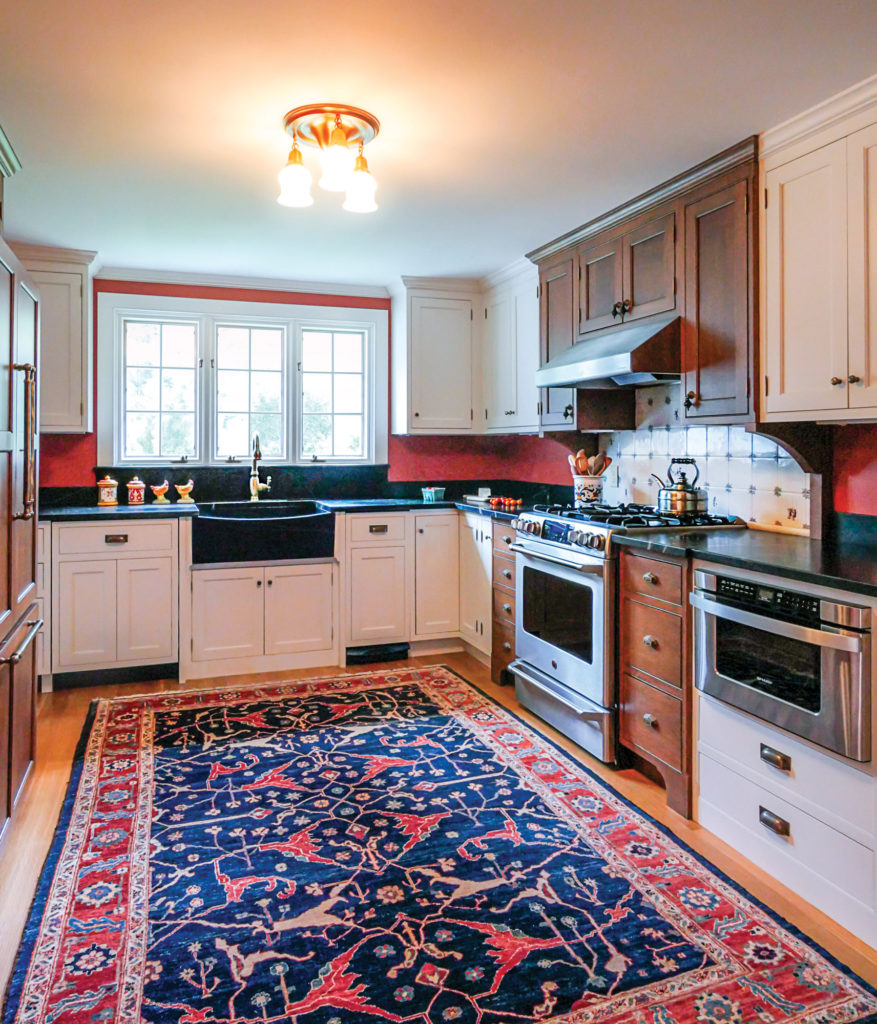 Quarter-sawn white oak floors throughout replaced a mash-up of mid-century floorings: linoleum, hardboard, and carpeting. “We used four coats of a zero-voc, whey-based finish from Vermont Natural Coatings,” Meyer says, “and it has held up very well.”

Visitors are greeted with Pierre Frey’s ‘Gasaki’ wallpaper in Red Curry, its lively red-orange complementing blue-greens used in other rooms. The interior palette is based on colors in Meyer’s previous house, modified for this one. For the new dining room, Meyer even had the wallpaper from his previous residence reproduced in a custom run.

“The basic combination of gold, orange, teal, and red had to work together for long views through the house,” Vitzthum says.

The furniture is a mix of antique, vintage revival, and traditional pieces. In the dining room, the gilded mirror is an heirloom passed down from a Hudson River ancestor, Meyer’s fourth great-grandfather; its 15 acorn pendants near the top represent the then 15 states, dating it to 1795–1800. For three generations or more, it has hung over the Federal tripod table.The chandelier came from the Governor Smith mansion in St. Albans. Before that house was razed, the Art Deco-era fixture was found stored in a carriage-house stall; Conant Metal & Light replated and restored it.

The living room’s austere mantel is original. Vitzthum added a wainscot to the new dining room, a formal addition; the chair rail is low, in keeping with classical proportions.

Vermont artists represented in the house include the renowned folk artist Bessie Drennan. Many of the portraits are of family members, some of them painted by relatives. John Meyer’s family has been in Vermont since the 1760s.

The simple plan of the traditional Cape is “almost as modern as Modern,” said the architect who revived the form in the mid-20th century. An M.I.T. graduate who’d also worked in the trades, Royal Barry Wills opened a Boston office in 1925 and went on to specialize in revivals of Cape Cod houses, saltboxes, and garrison Colonials.

Meticulous about scale and details, Wills (1895–1962) was also an author, educator, and promoter of good design, which gained him a national reputation. His firm designed in Tudor, French, and Modern idioms, too, all without ostentation.