The noblest of callings may arrive in a moment of apparent insanity. “I said, ‘What are you thinking? Are you crazy?’” Shireen Aforismo told her husband, John, the day he revealed that he intended to buy the big Victorian a few blocks from their home. Shireen—who often strolled through Old Wethersfield’s historic district—knew it well. Named for the 19th-century seed merchant who built it, the Silas W. Robbins House was one of relatively few examples of High Victorian architecture in the town better known for its Colonial past. With its ornamental three-tier entry and lacy iron cresting atop a slate-tile mansard roof, the house stands as an imposing tribute to French Second Empire style.

Shireen also remembered the wail of sirens several years before, when a fire engulfed the house, shattering windows and leaving a gaping hole in the roof. She’d watched the house decay as its owner made plans to replace it with several new building lots. What she didn’t know was that John had been walking by the house, too—and that one day he’d cautiously slipped inside, emerging with his crazy idea.

Had John not followed his instincts, and Shireen not backed him up, Wethersfield might have lost a piece of its history. The house was built in 1873 by an entrepreneur whose industry—garden seeds—would become a rooted part of the town’s economy. Later it became the home of Alfred G. Hubbard, a local builder whose Revival-style homes brought Wethersfield’s Colonial heritage into the 20th century. Later the house was used as a law office.

Vacant after the fire, the house became the target of vandals. “You could smell the mold,” Shireen says. “A blue tarp over the hole in the roof gave everything an eerie, bluish glow. Ferns were growing out of the porte cochere.” Following the house’s balloon framing, the fire had gone up the side wall, over the roof, and back down the other side. “The plaster was saturated with water, the laths were mush,” Shireen recalls. But, like John, she found herself looking past the wreckage. “I was excited,” she said. “I just saw the magnificence.”

Although two architects judged the house to be beyond repair, John spent the next few years appealing to local boards and negotiating with the owner, who agreed to sell in May 2001.

The long road to ownership meant that the Aforismos already had a contractor—and dumpsters—lined up the moment papers were signed. Much interior material could not be saved, so replication and replacement would rule. The loss allowed easy installation of insulation and new mechanical systems, however, so the house would be far more comfortable and energy efficient. With minor tweaks, the Aforismos would restore the house to be shared with others: they decided to run a bed-and-breakfast establishment here.

Replacing the roof required a towering crane that drew a crowd. As work progressed, strangers shared photos or personal memories with the couple: “This house has a connection with so many people,” Shireen says.

The next job was repairing and repainting the exterior, which was mostly intact. Removal of plywood revealed arched windows and raised panels; stripping off shingles exposed original clapboards. Shireen wasn’t inclined to replicate the original color, which she described as a mauvy pink. She chose a sage green body color with cream trim and aubergine accents.

They were helped with the interior scheme by designer Michele Cottone Kriticos at MCK Interiors, and hired a contractor to manage the work. “He was here every day for three years,” John says. They rebuilt walls and floors and tore out drop ceilings that hid elaborate stenciling and coffers. Researching Victorian style, Shireen traveled to Newport, R.I., and to the 1874 Mark Twain House in nearby Hartford, bringing along a woodworker so he could sketch mouldings for replication. She began collecting antiques—stashing her finds, including dozens of chairs, where she could. “For a while,” she laughs, “my mother-in-law’s family room was furnished like a funeral parlor.”

The couple had cashed in insurance policies and retirement funds to help pay for the restoration. But two years in, they ran out of money. “I had thought we could get it done in a couple of years,” John says. They stopped work to reassess. Their three grown children wouldn’t let them walk away: “You always told us to stick with what we start.” Within a year, their economic situation was better, and they pressed forward, completing the renovation in 2007. 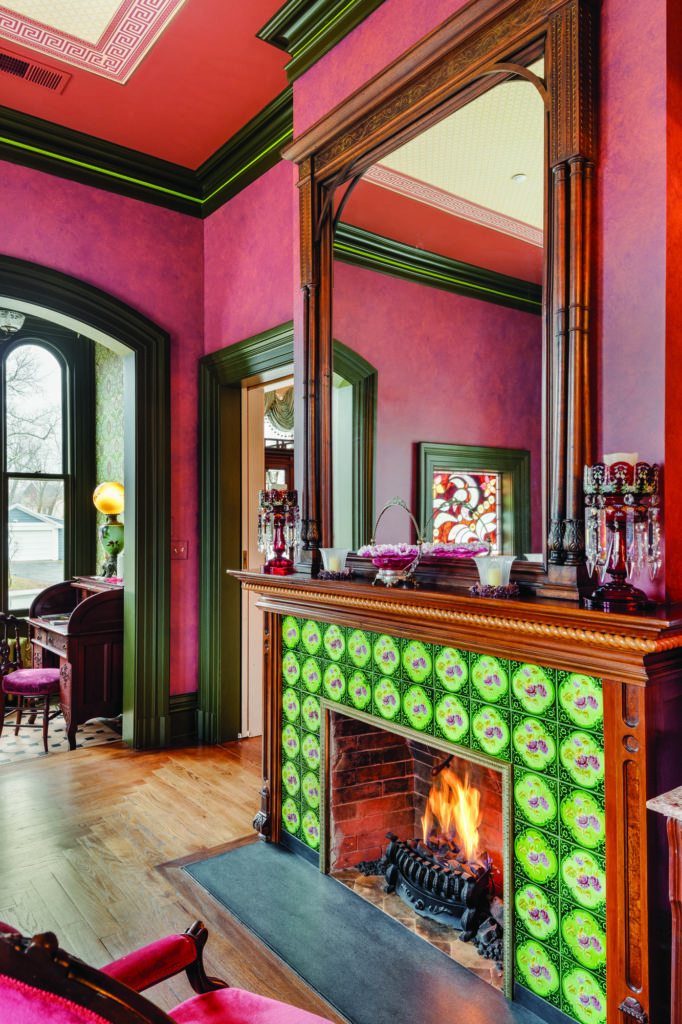 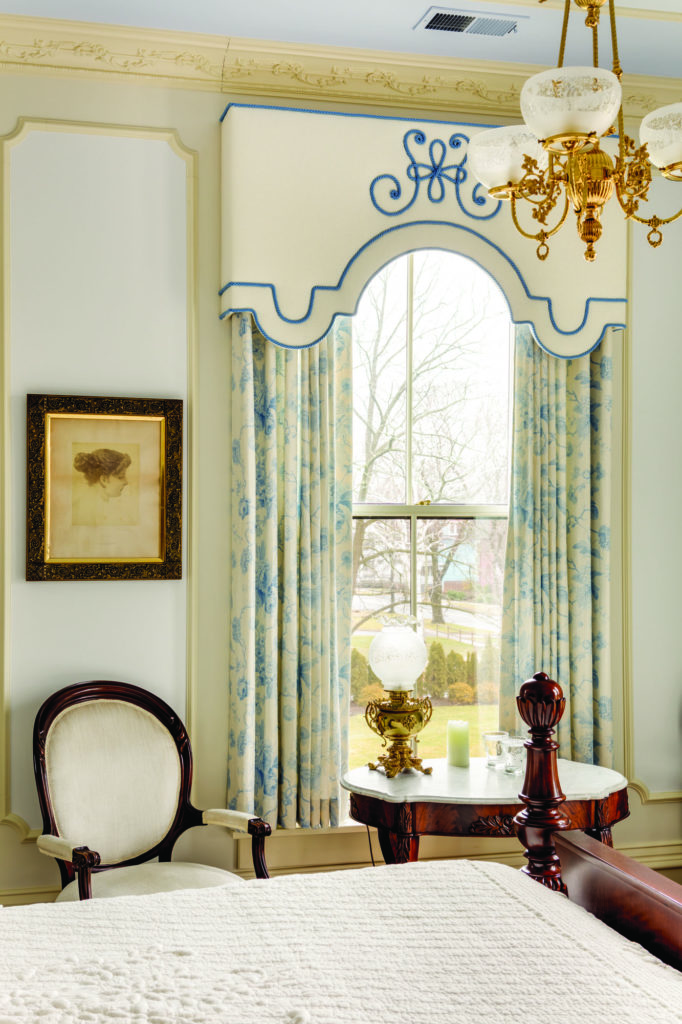 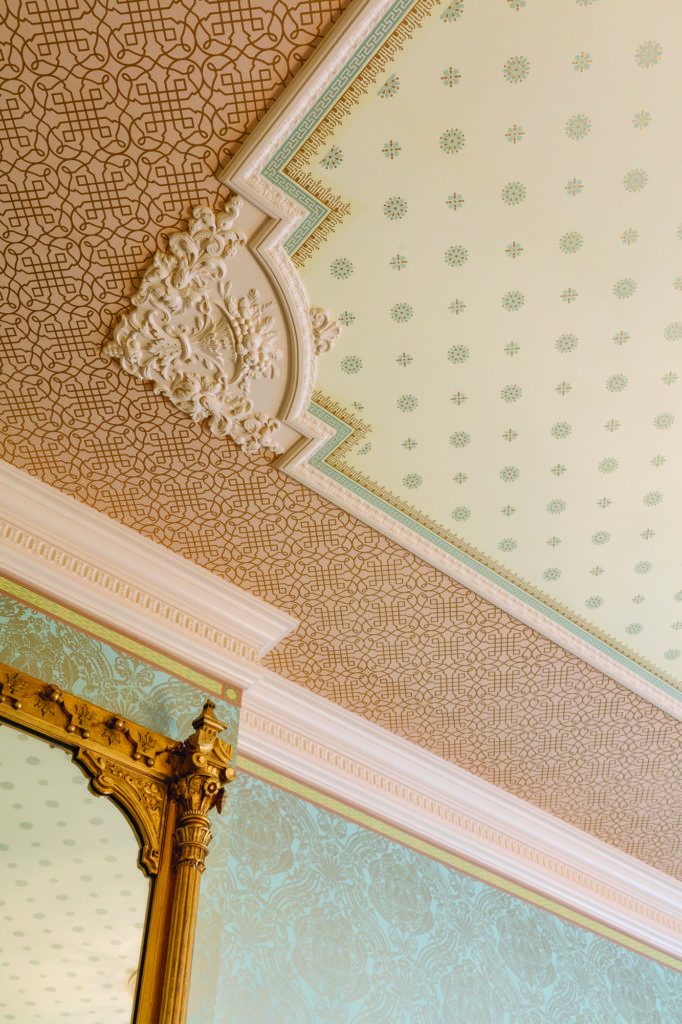 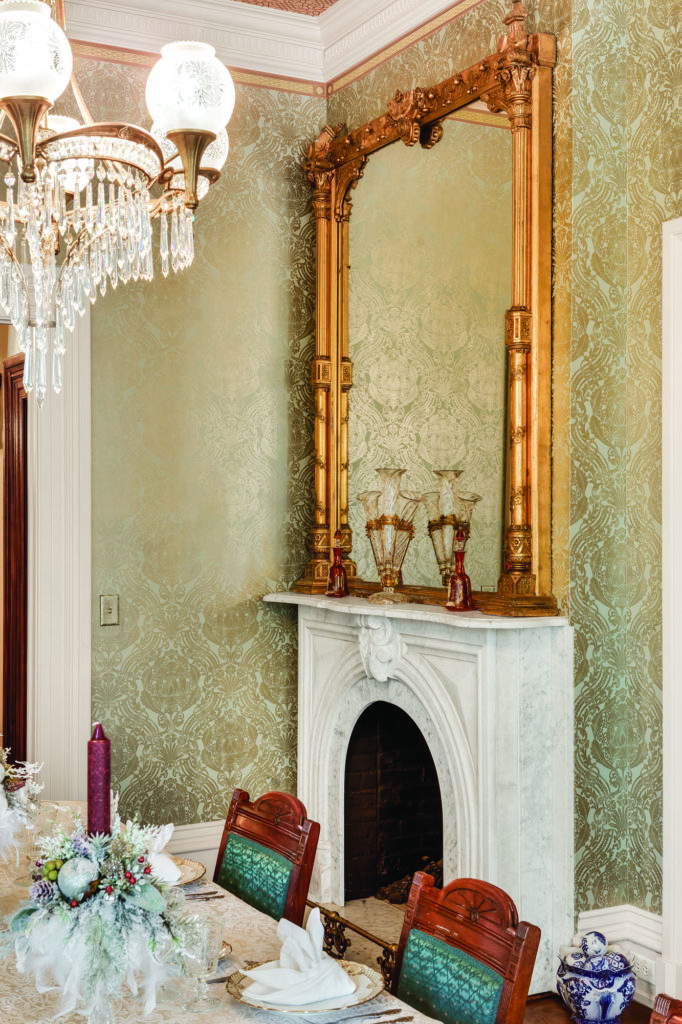 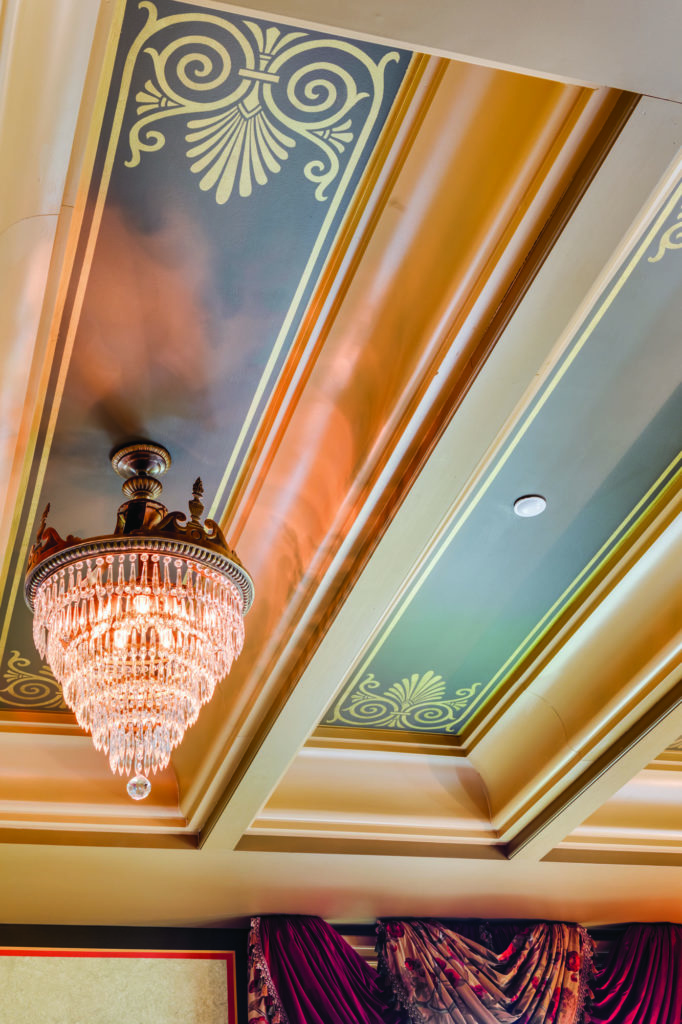 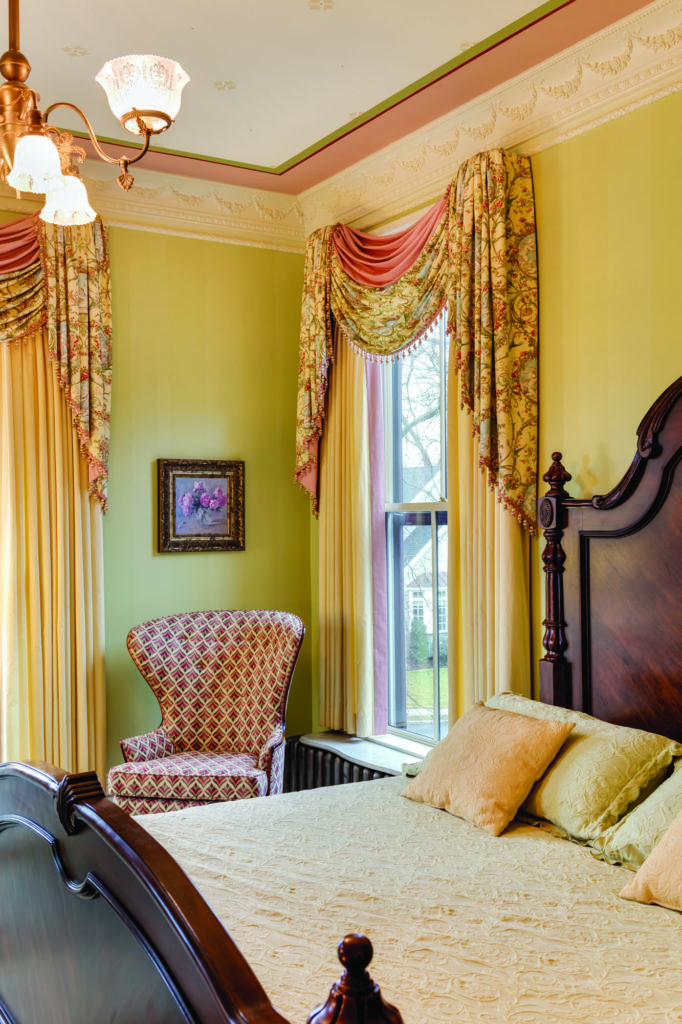 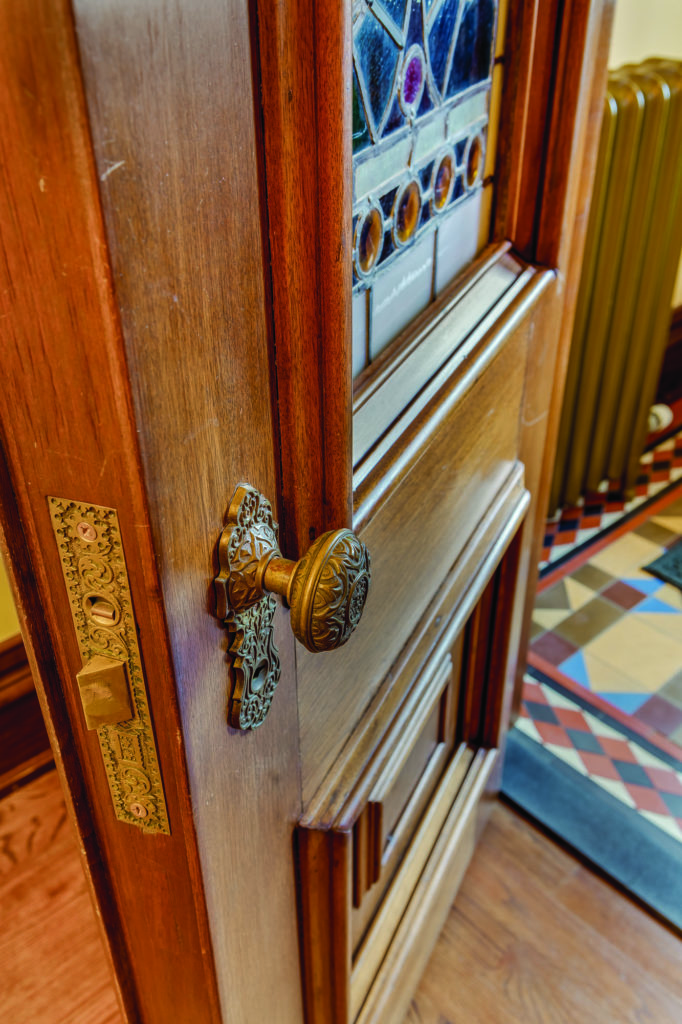 Shireen had amassed three storage units full of antiques. When they moved in, to John’s amazement, Shireen had a place for every piece. The Silas W. Robbins House welcomed its first guests with a gala, a benefit in memory of a friend who’d died on 9/11.

It had been over six years since the couple first toured the moldy and charred interior—and took leave of their senses just long enough to commit to the project. Did they ever doubt the worthiness of the mission? “As Mark Twain said: ‘To be successful, all you need is ignorance and confidence’,” Shireen answers.

Built in 1873, the Silas W. Robbins House was replete with hallmarks of the Victorian age, many of which the Aforismos were able to restore or replicate, thanks to the skill of local craftspeople. Luck played a role, too.

In an effort to recast the interior in Colonial style, the previous owners had replaced two original, white-marble mantels with wooden ones. The cast-offs may have been too heavy to haul very far: the Aforismos found both in a back room. They cleaned the mantels and reinstalled them in the Dining Room and Parlor. A third one, of rose-brown marble, was found in pieces on the den floor and reassembled. A particularly ornate surround in one bedroom was hiding under yellow paint—which was mostly melted off by the fire, saving a considerable amount of elbow grease.

As the fire raged, window glass around the house popped from frames. “We still get pieces coming up from the ground,” Shireen says. The only art-glass windows to survive were the leaded panels in the front door. Another casualty, the bull’s-eye window in the stairwell, was replicated according to a photo taken by a visitor. Colorful windows in a pair of doors leading from the Tea Room were destroyed in the fire. The owners found a photo of the doors in a magazine article about Wethersfield and had them remade.

Drop ceilings installed by a previous owner had hidden—but also protected—original details. Although damaged beyond repair by the fire, the ceiling coffers in the front parlor were rebuilt by the Aforismos, who also re-created a complex Victorian design using art wallpapers in the dining room.