Once upon a time, John Carrington would go jogging along the tree-lined streets in a suburb north of Seattle, and he always slowed down as he approached the whimsical little cottage with its entry tower and jaunty dormers. He dreamed of living in it. Then, in 2007, he and his partner, Scott McElhose, met the great-niece of the cottage’s original owner. John’s dream came true when they bought the house from her family.

The house was built in 1936 by one Emil Peterson, whose ancestors were Swedish, and his wife, Vollea, who was the first American-born child of Norwegian immigrants. Sited in a forest of old-growth Douglas firs, hemlocks, and cedars above a secluded ravine, the Storybook cabin has undeniable appeal. Just like John used to do, passersby stop in their tracks when they come upon the massive stone chimney, the entry porch in a stone tower, and a sweeping roofline with ends upturned like the prow of a Viking ship.

A soaring, 20-foot-tall great room fills the southern end. It is finished in Scandinavian Arts & Crafts details that include rustic hand-hewn fir beams and mouldings, strap-iron braces, and a two-storey stone fireplace. Emil Peterson had been a talented artist, and his personal touch remains evident. In the entry porch and staircase, bands of rosemåling (folk decorative painting) depict flowers and vines. The amusing doorknocker and peep-hole form the shape of a fir tree.

John and Scott are but the second owners; nonetheless, their repair work was cut out for them. The house had been rented for 30 years and needed significant updating. The kitchen had been “modernized” in the 1970s with brown laminate countertops and two layers of brick-pattern sheet flooring glued over the original vertical-grain fir floor. Ancient galvanized pipes were severely clogged. Other than cedar shavings wrapped in brown paper that was stuffed around the insides of the window frames, the house had no insulation. Original murals depicting pink flamingoes in the bathroom were long gone, and the yellowed old linoleum wore brunette patches from a messy hair-dye job in the past.

Work started in the kitchen—with a crowbar. Stripping away the messy flooring adhesive was laborious until the morning that Rushmore, the springer spaniel, spilled his water bowl and the glue was found to be water-soluble. The fir flooring was thus restored to its mellow beauty, while the countertops were updated in marble with a backsplash of subway tile. The period-green tone of a retro refrigerator was picked up for original cabinets repainted in Valspar’s ‘Spearmint Shale’. A woodpecker hole discovered in the siding was sealed and repaired. The breakfast nook was then leveled by jacking up exterior support pilings underneath, straightening the casement windows so they once again smoothly swing open.

The main bathroom was torn down to the studs, a fiberglass shower surround removed, and the floor leveled, allowing installation of black hexagon-mosaics floor tile. The original 1930s Standard Plumbing bathtub, toilet, and pedestal sink—all in a stunning and startling rose-pink color—had been preserved, and now have been reinstalled in a nod to the room’s Art Deco leanings.

Fortunately, many original elements had been maintained and just needed a thorough cleaning. That included the painted and scored concrete stairwell meant to look like cobblestone construction. The original fir woodwork and faceted mouldings, and even the gleaming copper curtain rods, were in good shape.

Upstairs, the master (and only) bedroom at the top of the faux-cobblestone stair was meant to be closed off by a hinged strapwork door. But previous renters had broken it down in a panic after their child was trapped inside, and they used the door for firewood! John found a suitable replacement at a local salvage shop—a charming entrance door from a 193os London flat, with a window of red and green stained-glass hearts that complement motifs already in the great room. The upstairs half-bath had been painted an eye-popping pink (on walls, fixtures and even floor tiles); it was restored with a restful palette around the white porcelain fittings and wainscot.

After several years spent restoring the cabin interior, the partners began redesigning the ¹³-acre property sited in a forested glen. They added retaining walls, terraces, rockeries, and paths through the woods. Friends gave them cuttings and plants, and slowly the gardens began to fill in. The house exterior had been painted a depressing grey with minty trim. John and Scott engaged artist and colorist C.J. Hurley to come up with a more fitting scheme; now green and black accents play against earthy browns and khaki.

Both men are collectors, so it wasn’t long before the house began to fill with Arts & Crafts furnishings, antiques, and Northwest collectibles—a Gustav Stickley rocking chair, Native American baskets and blankets, miniature souvenir totem poles dating from the 1940s. A 1910 oil painting of Mount Rainier hangs over a handsome oak writing desk that dates to ca. 1914, which was found at a barn sale locally. A gleaming, hand-hammered copper chandelier was hung in the center of the great room, and the floors enlivened with reproduction Morris- and Archibald Knox-design English Arts & Crafts carpets.

John Carrington and Scott McElhose have an old photo of the house, taken in 1937. “Not much has changed!” John marvels. In the archival photo, the rustic little building seems just to have emerged from the forest. 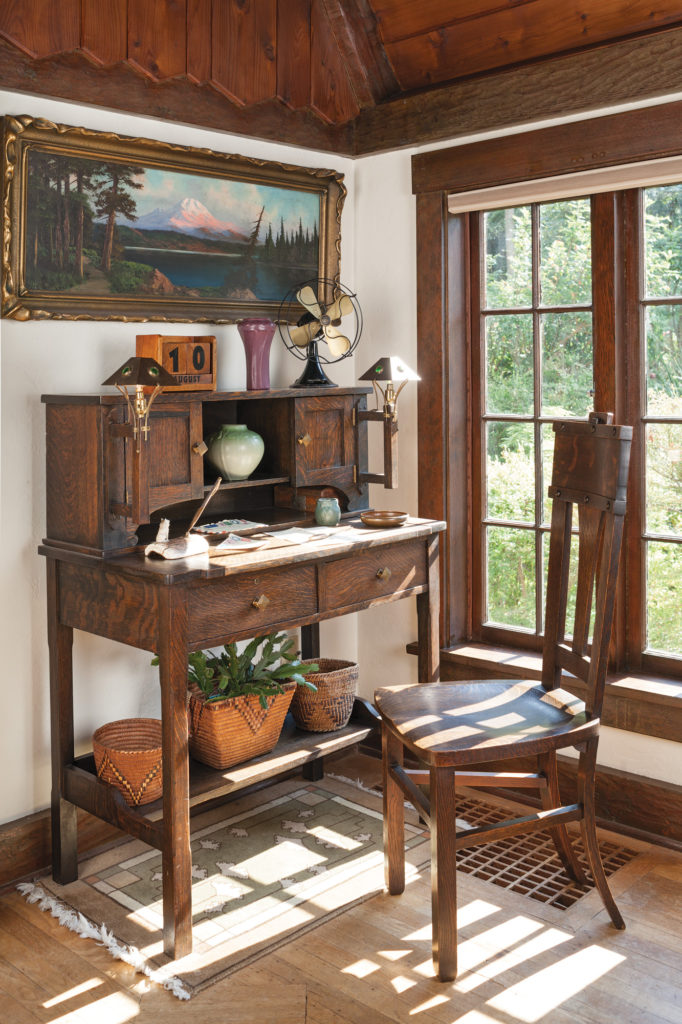 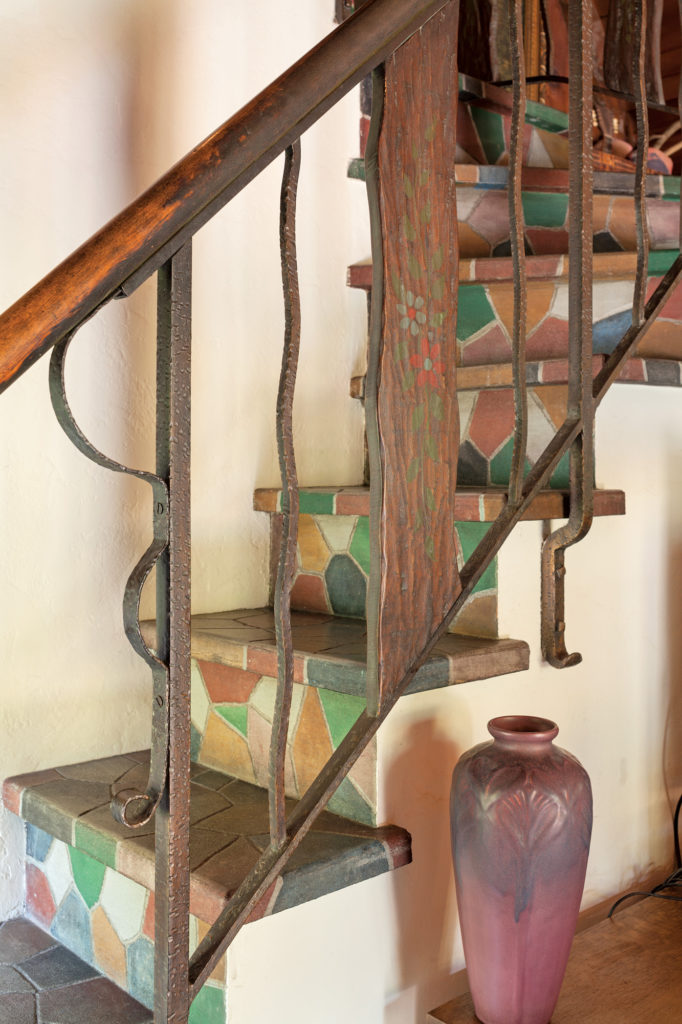 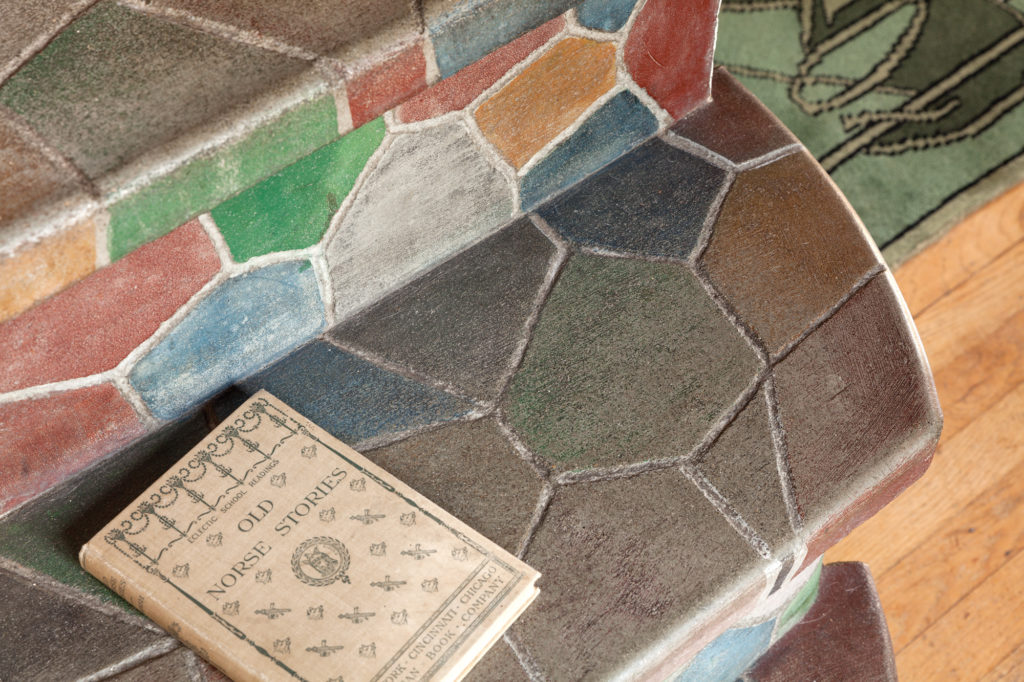 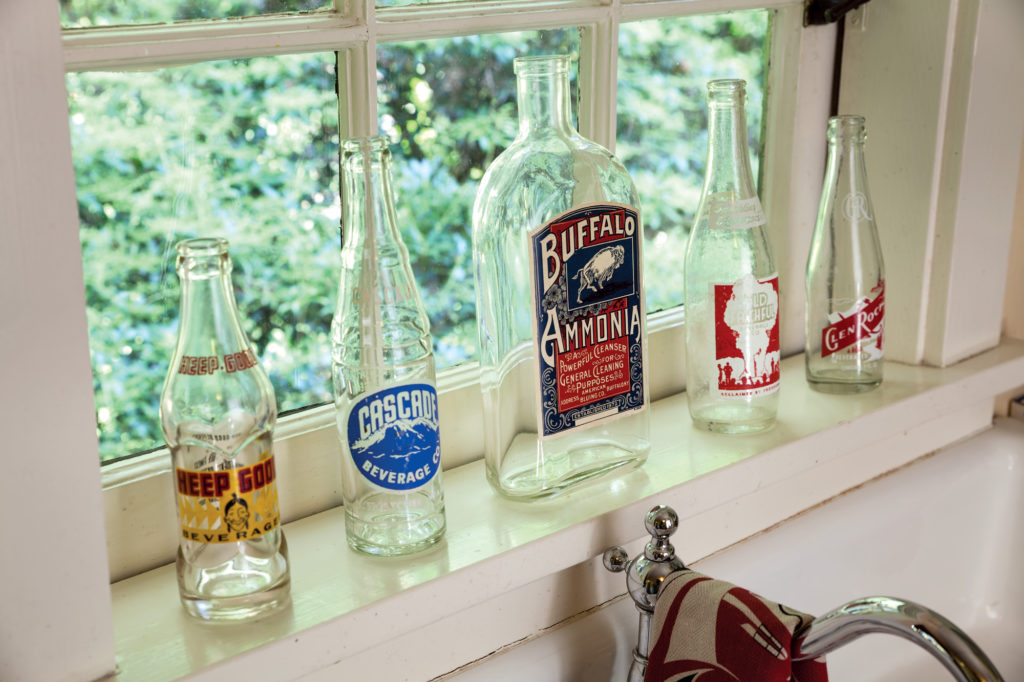 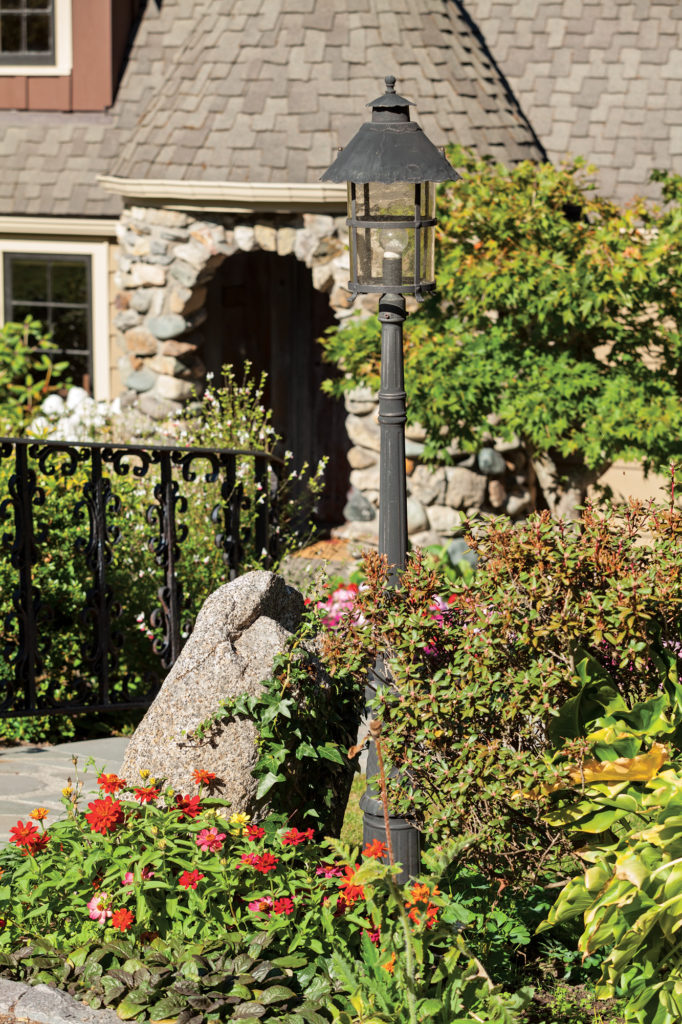 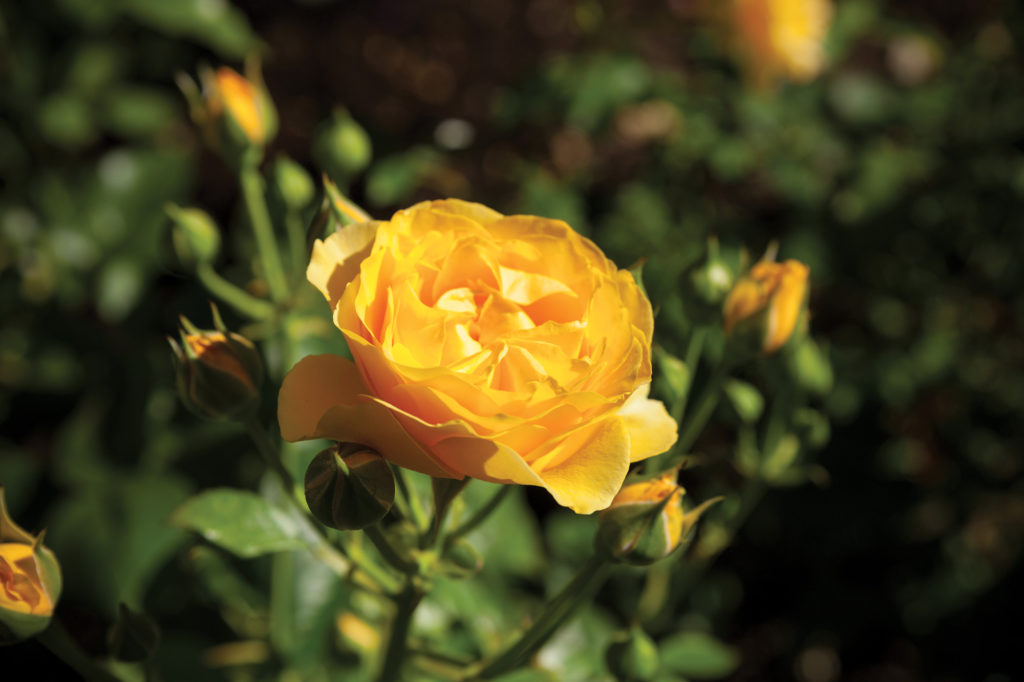 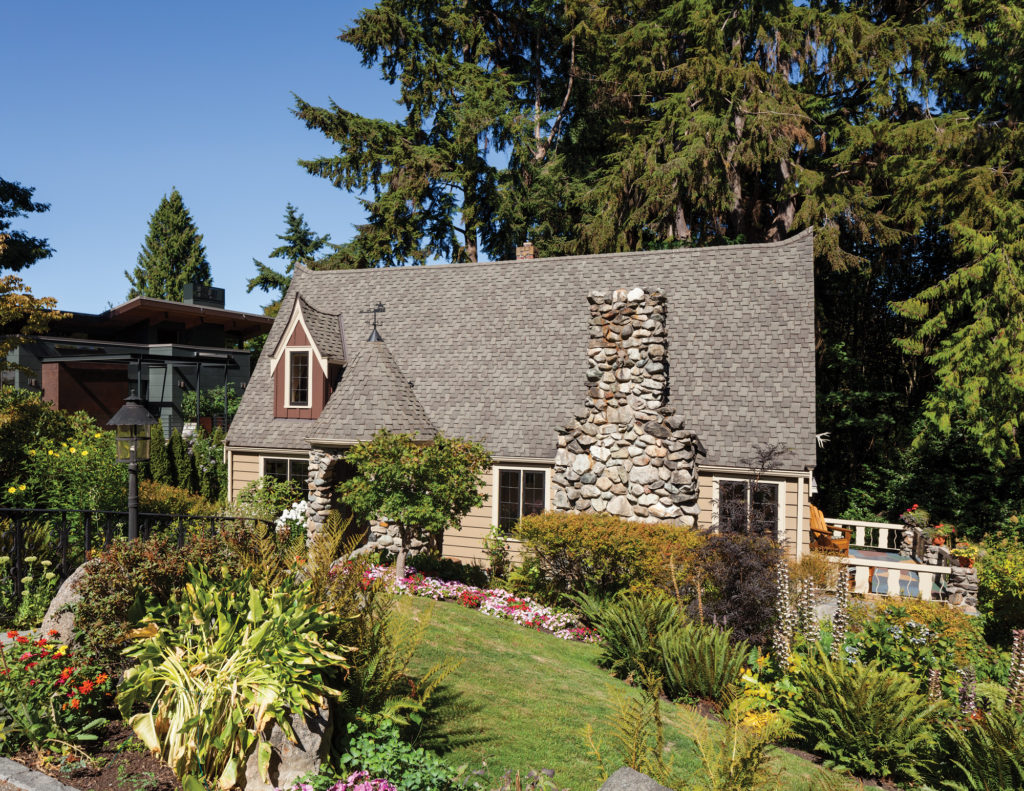 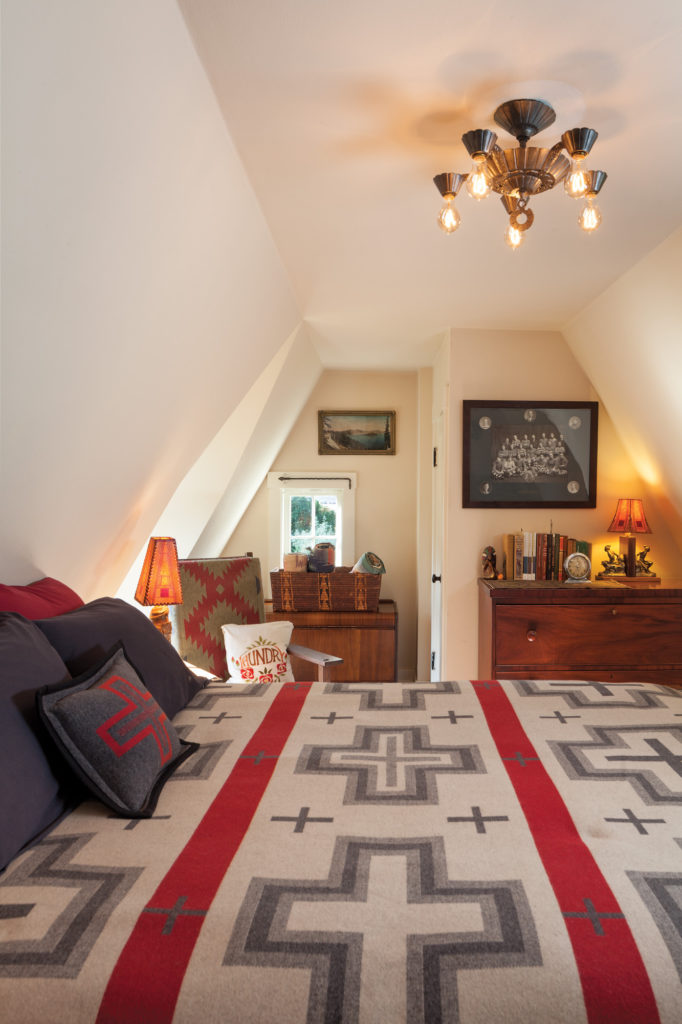 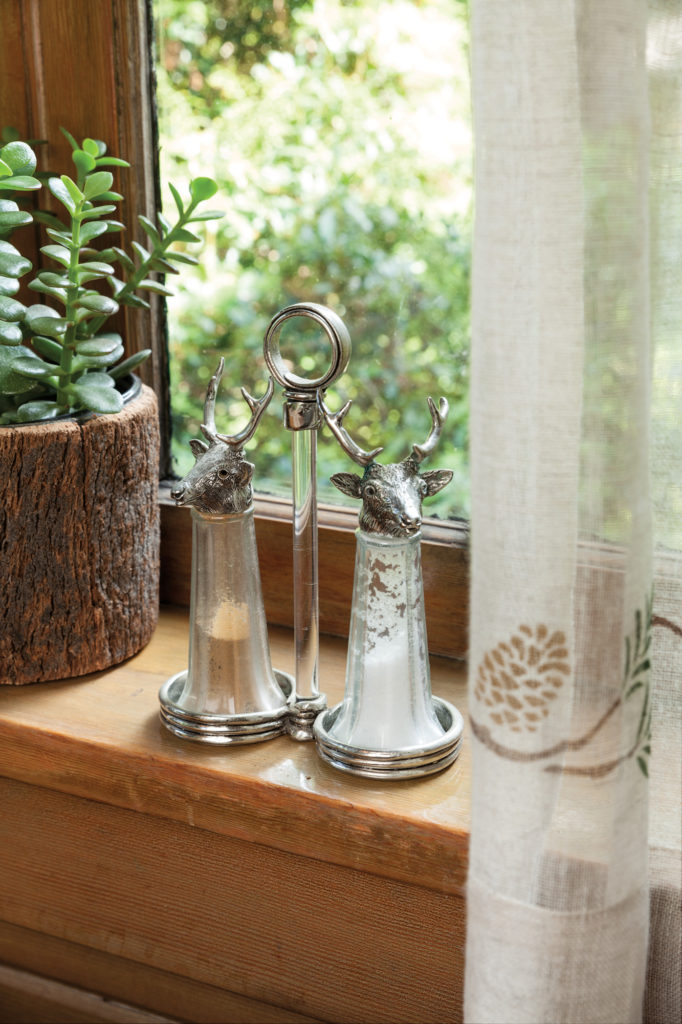 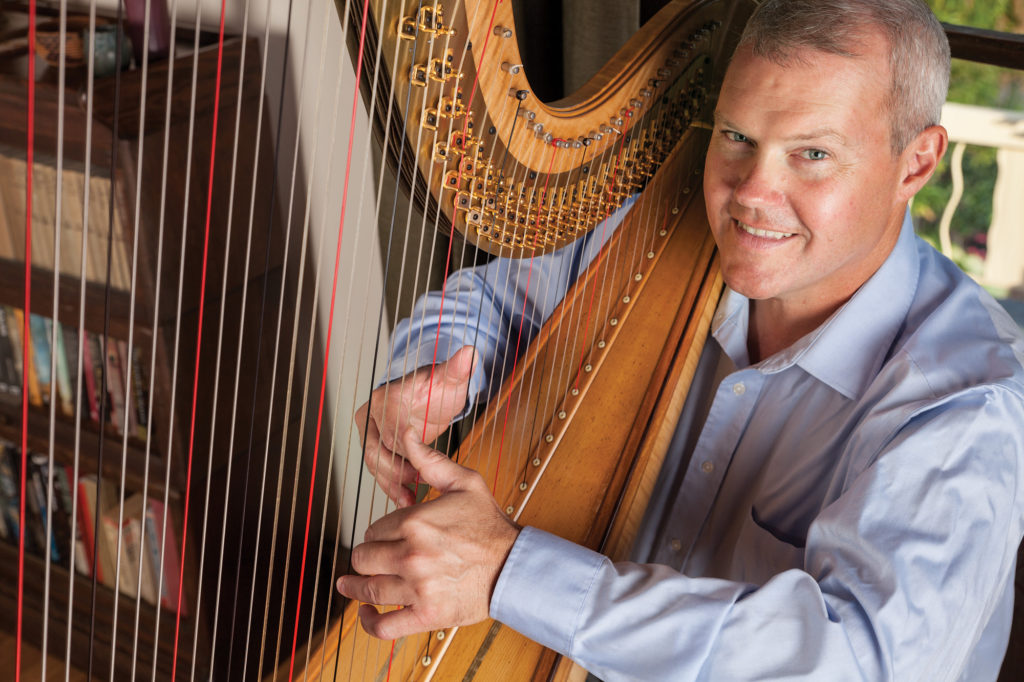 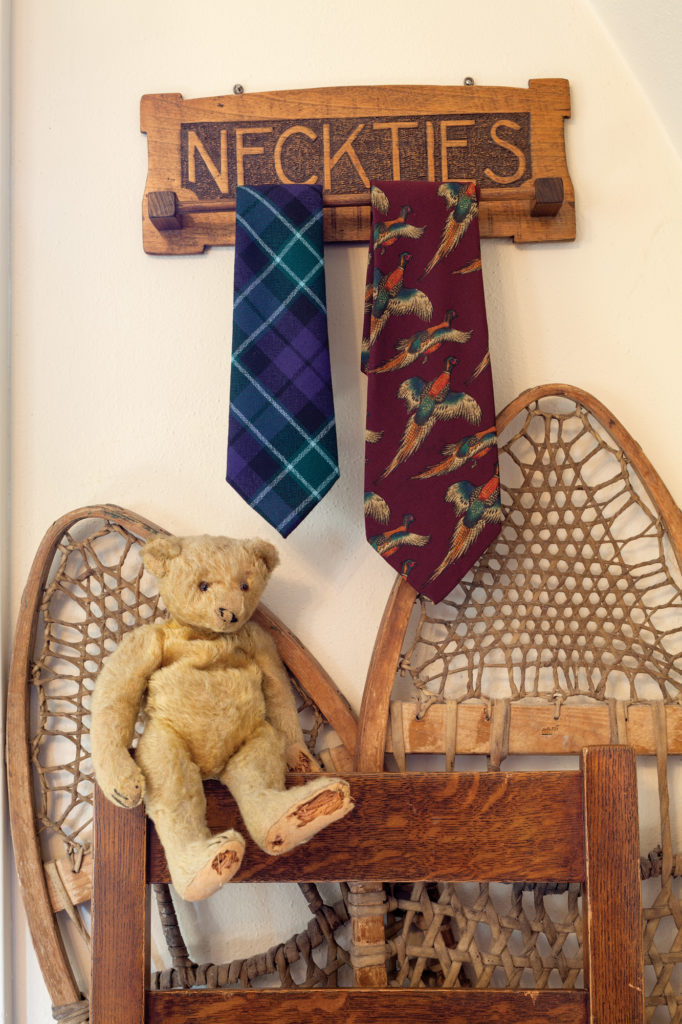 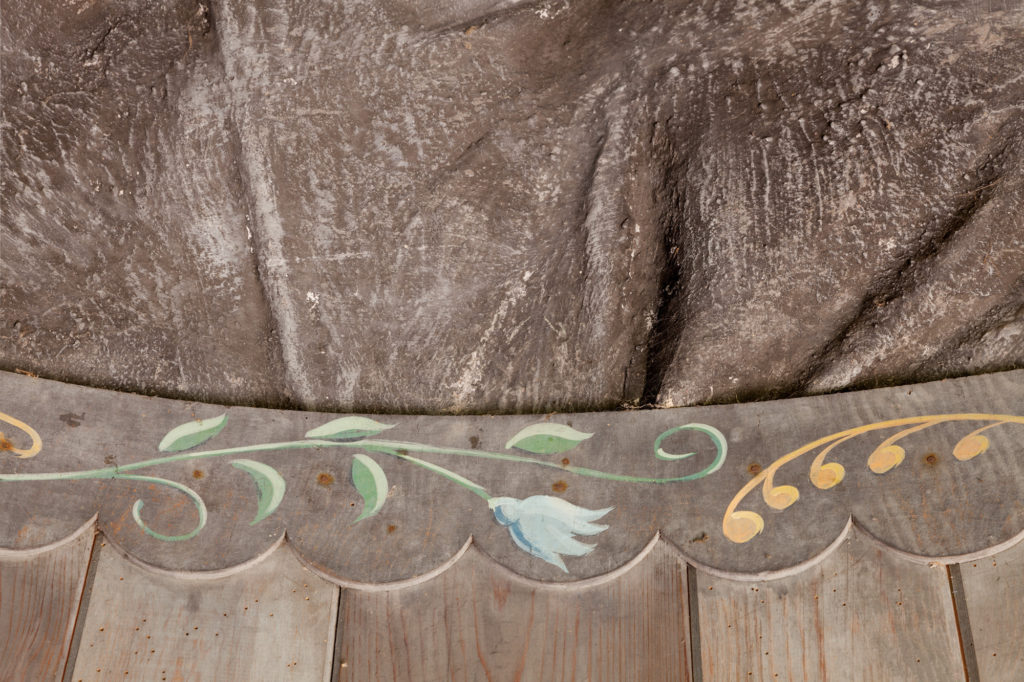 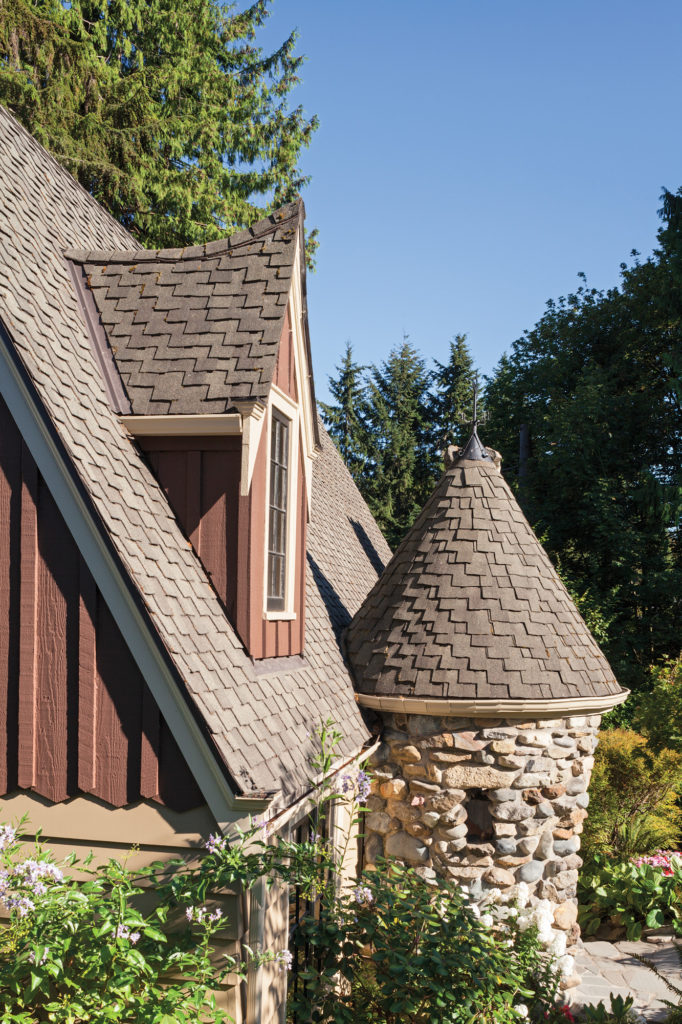 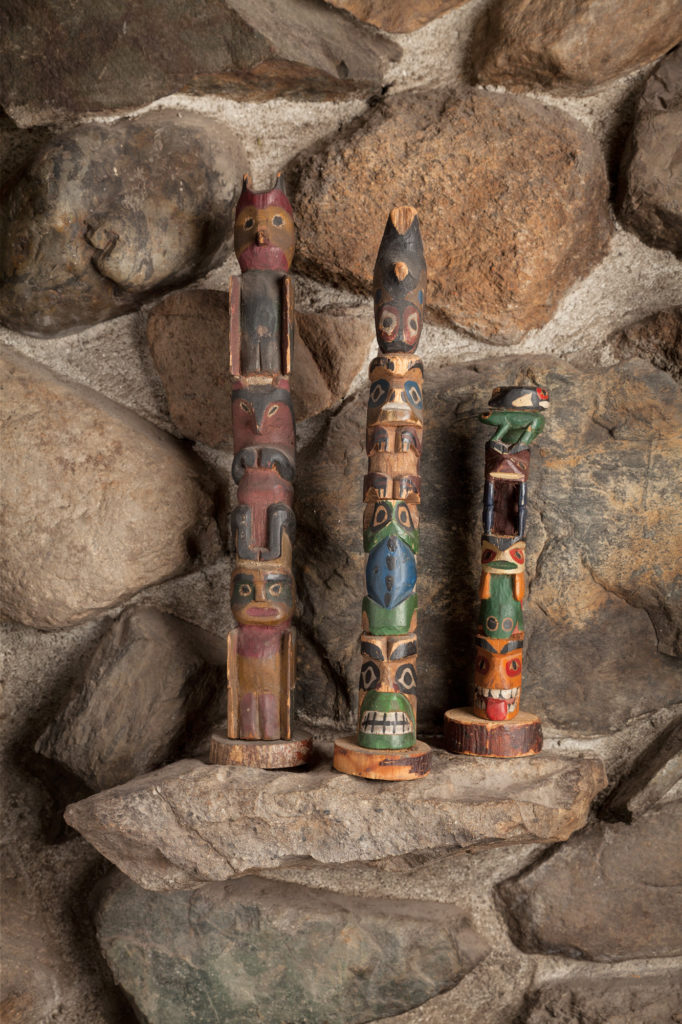 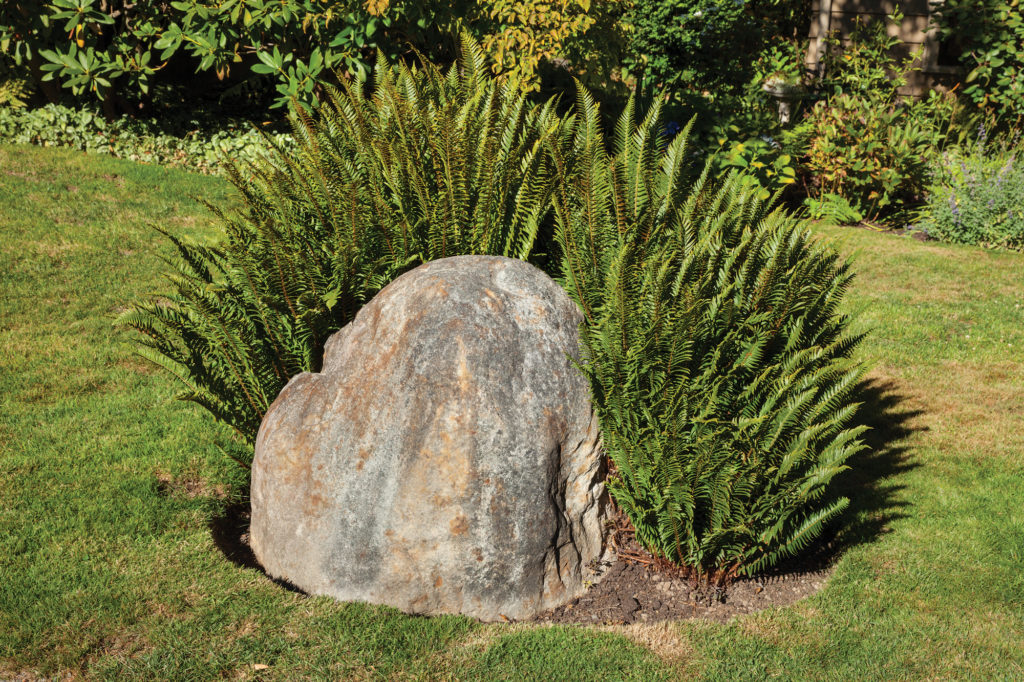 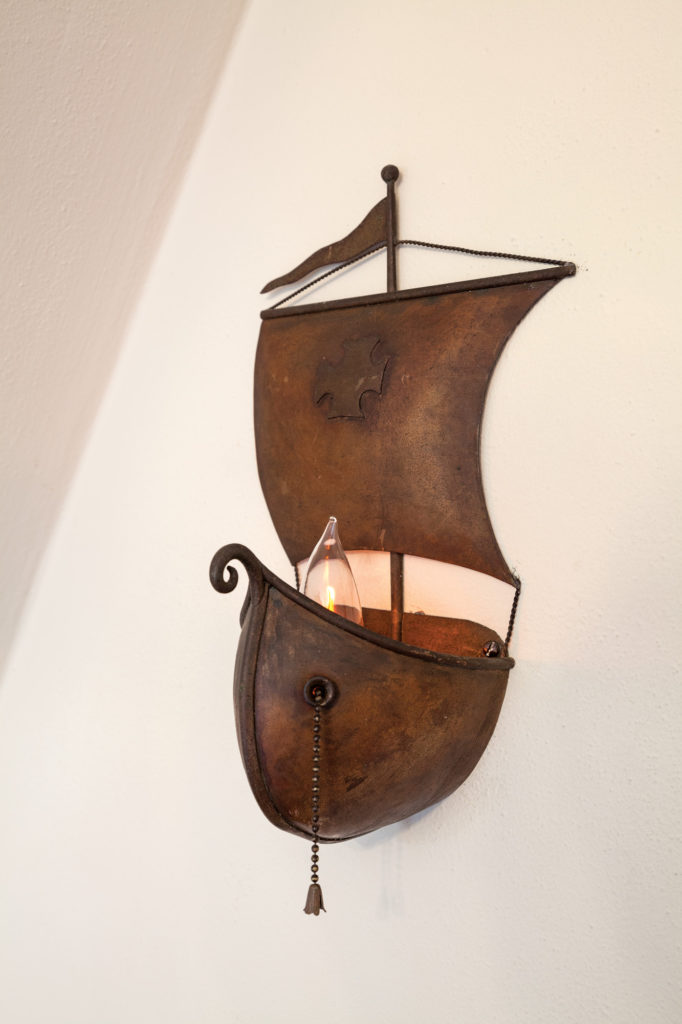 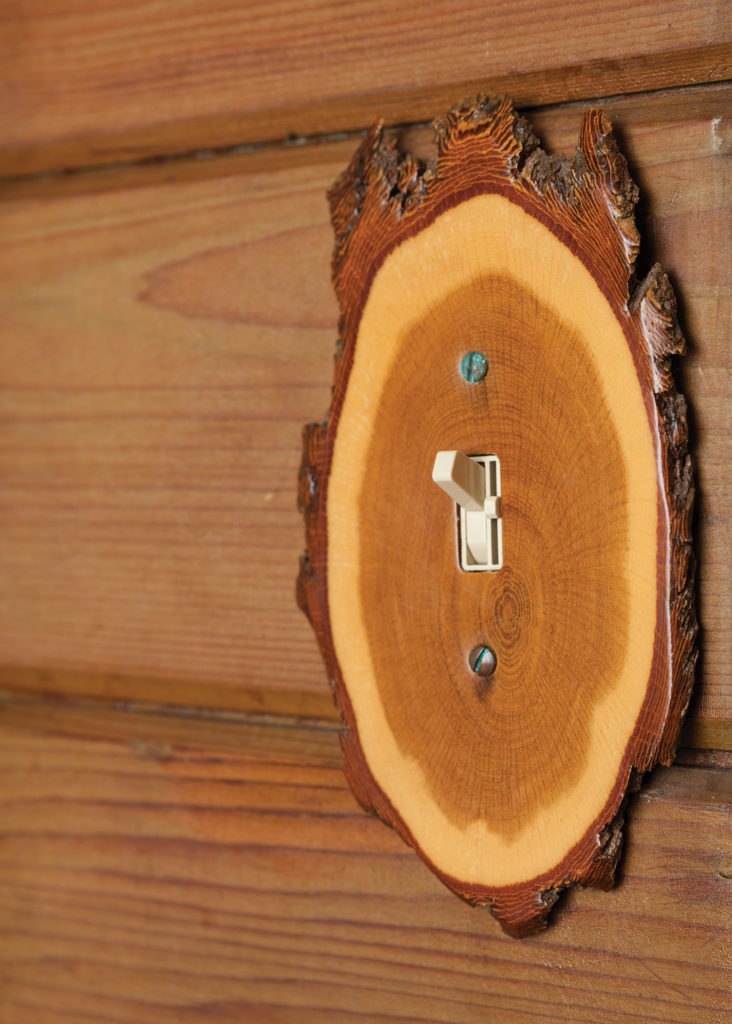 A traditional decorative folk art originating in Norway and most popular from the second half of the 18th century until the 1860s, and which had an American revival in the early 20th century. The painting on wood features stylized flower ornamentation, scrollwork, lining, and geometric elements, often rendered in flowing patterns that show the technique’s Baroque roots. Motifs from landscape and architecture appear. Glazing, marbling, and spatter-painting often accompany the decoration. Colors may be bright or subtle; strong regional styles developed. The technique is common in Sweden, too, where it’s called kurbitsmålning.