Altering the original footprint of an old house always requires a sleight of hand: cladding materials must be matched, rooflines copied, window sizes and shapes perfectly replicated. But most additions are tacked onto the back of a house, where a slight margin of error usually isn’t noticeable. Changing the front elevation of a historic house, however? That requires Houdini-caliber architectural magic.

When Malcolm and Kelley Oakley undertook such a project on their Atlanta Tudor, they felt compelled to get it right, given the home’s famous pedigree: It was built in 1925 by local firm Ivey and Crook for the son of author Joel Chandler Harris. “They really viewed themselves as stewards of the house,” says architect Greg Palmer of Harrison Design Associates, whom the Oakleys brought on to help them achieve their vision. “One of our major directives was that a person should be able to walk through the home and not tell where the old house stopped and the addition began.” 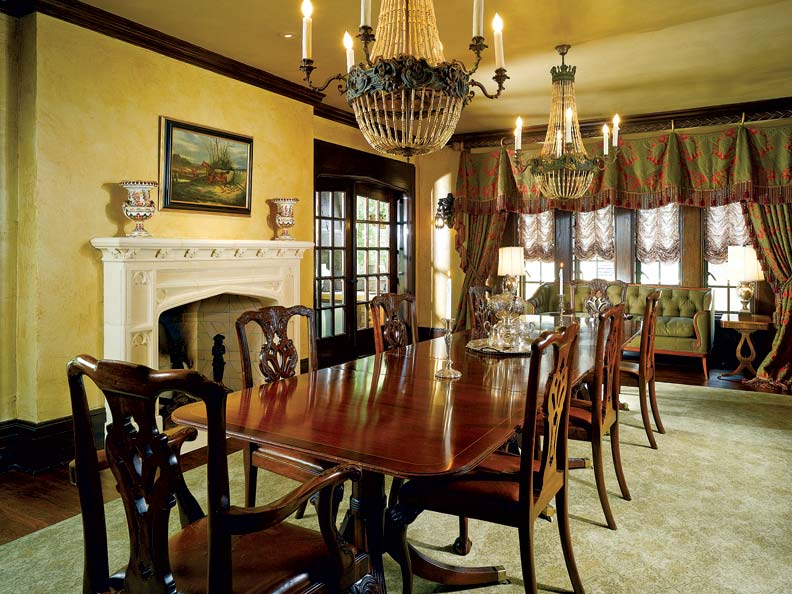 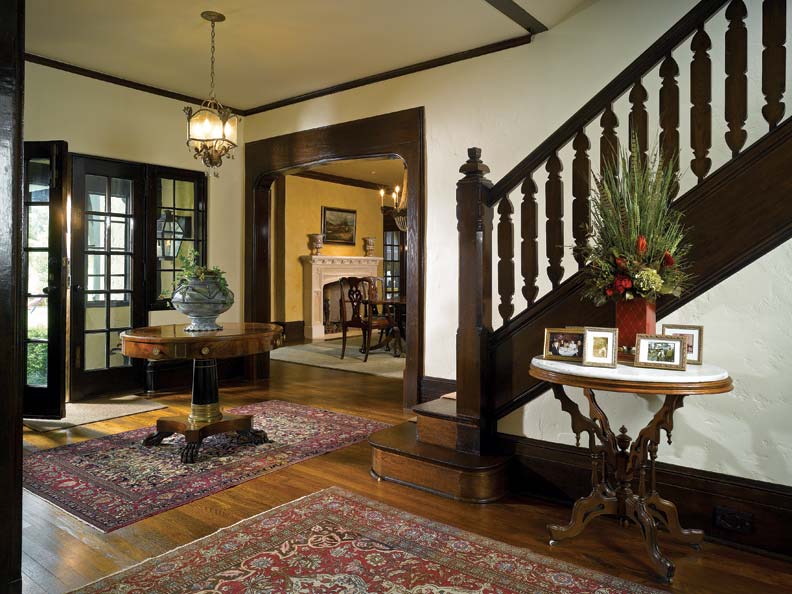 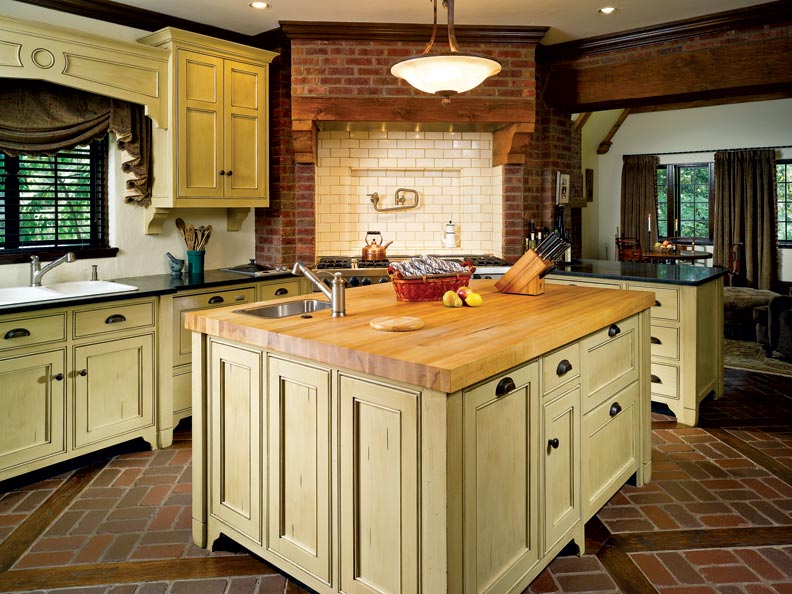 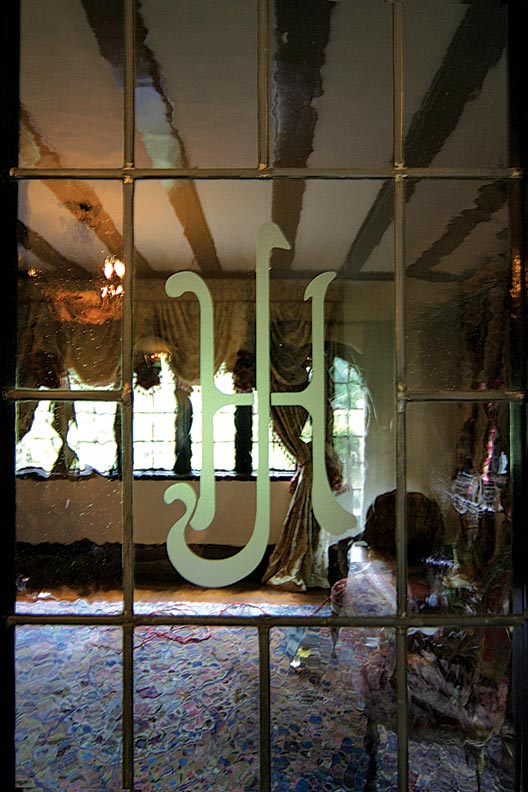 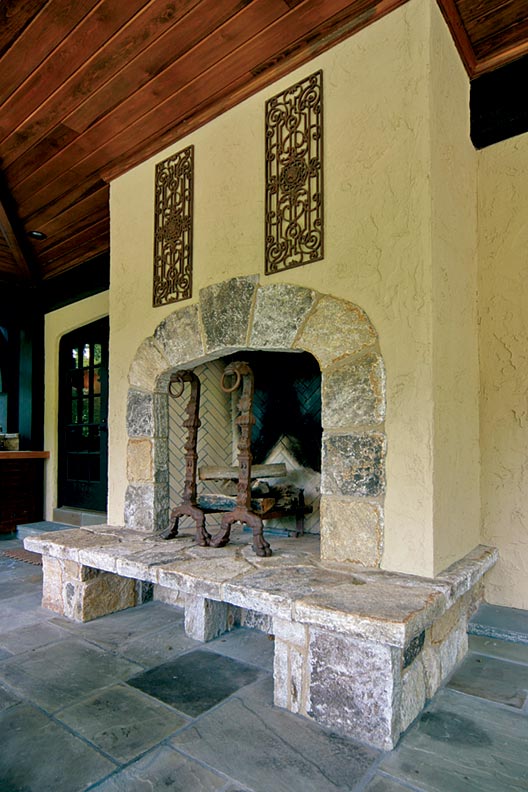 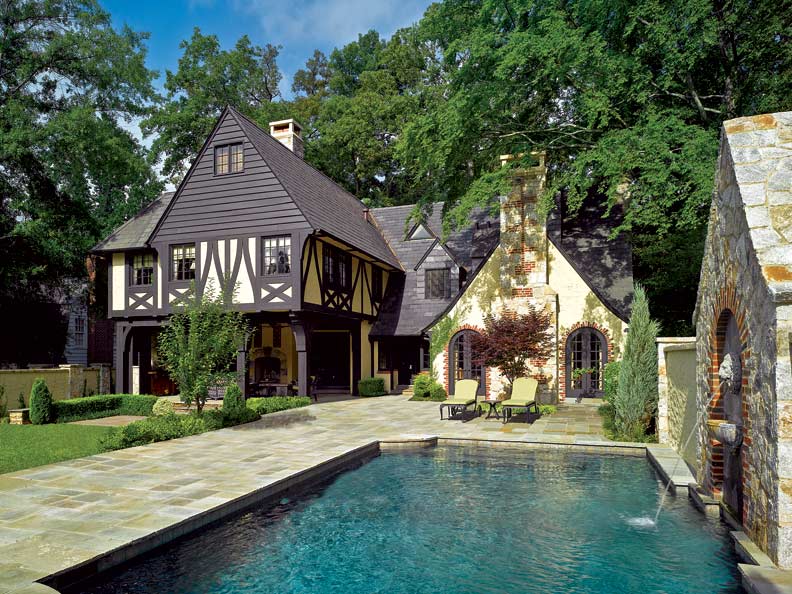 The first major collaboration between Greg and the Oakleys was to determine a floor plan for the expanded house. Malcolm and Kelley wanted plenty of space to entertain (though their priorities changed during the project when they found out Kelley was pregnant with twin girls—“now we use the space for chasing after little kids,” she laughs); the original iteration of the design called for adding more than 6,000 square feet onto the 5,000-square-foot house.

Plans changed, however, after September 11, 2001, when Malcolm, a private investor, became spooked by the instability in the stock market. “We decided to regroup and cut way back,” Kelley says. “We ended up adding only about 2,500 square feet.” But the unexpected change proved to be fortuitous: “I’m so glad we scaled the project back,” Kelley says. “It’s definitely more in line with what was originally here.”

The pared-down design still included their favorite features of the original plan: an enlarged kitchen and dining room, a larger nursery and master-bedroom suite, and an outdoor terrace and pool. The project required two major additions on the south side of the house: The expanded kitchen and breakfast nook (a must-have for amateur chef Malcolm) were bumped off of the front of the house, while the second-floor master suite and covered terrace below were extended off the back.

For the front addition, Greg and his team faced the daunting task of perfectly matching the existing stucco, decorative brickwork, slate roof, and windows. Some details came together after tireless research: “We went through probably half a dozen or more mock-ups before we found the brick we wanted,” says Greg. In the end, they used a combination of two different bricks to replicate the texture and color of the wire-cut originals. The mortar required a bit of trial and error, too: Unable to achieve the proper color with traditional masonry sand, Greg decided to use river-run sand instead. “It was a more common technique for the era in which the house was constructed,” he explains.

To replicate the rolled steel casement windows, Greg tracked down the original shop drawings at the Atlanta History Center and sent them to Crittall, a centuries-old English window manufacturer, to create the new windows needed for the addition. “The new ones were weather-stripped a little better,” he says, “but the sight lines are exactly the same.”

Other details required a little bit of ingenuity. Unable to find weathered slate that was a perfect match for the roof’s originals, Greg decided to improvise: He moved slates from the rear of the house to the new addition, then filled in the rear roof with reclaimed Buckingham slate. “We broke it at the ridge so you can’t see the two types of slate at one time,” he explains.

Re-creating the artistic skip-trowel texture of the original stucco also took a bit of maneuvering. “The trick to it,” says Greg, “was getting the stucco installers to loosen up enough to place stucco in that texture—they were so used to doing perfect stucco.”

The same attention to matching old and new was carried through to the interior of the house as well. The main house boasted plenty of original details, from rich woodwork and beamed ceilings to monogrammed sidelights surrounding the French doors to the living room. “We let the existing house be our guide for new materials,” says Greg.

Once again, his team went to great pains to replicate the slightly imperfect texture of the original interior plaster; they also matched up hardwood flooring and ground new knives to custom-make moldings in the same style as the originals. The style and era of the house also provided cues for new components—a traditional butler’s pantry was carved out between the expanded kitchen and dining room; the outdoor fireplace on the new terrace features a rustic Tudor arch.

Interior designer Karen Ferguson, also part of the staff at Harrison Design Associates, worked with Malcolm and Kelley to pin down appropriate décor decisions. “We were careful to pick quality materials that you would have seen back in the 1920s—even for things as small as the tiebacks and hardware for the drapes,” she says. “The Oakleys wanted to make sure the quality is what it would have been, even if no one saw them.”

The couple’s reverence for the original house may have helped guide the expansion, but Kelley gives full credit to Greg and his team for translating their vision into reality. “Anything we thought of, they had a solution for,” she says. “There was no detail they left untouched.”