In the late-nineteenth century, the summer resort trade was booming in the Catskill Mountains, largely buttressed by the arrival of the railroad to the area in 1882. It was there in a peaceful wooded enclave that artist and craftsperson Candace Wheeler and her brother, Francis Thurber, co-founded a social and literary club in 1887. Wheeler, an important figure in the American Arts and Crafts movement and a partner of Louis C. Tiffany in the decorating firm of Associated Artists, invited many prominent artists, writers, and philosophers to visit—Mark Twain, John Burroughs, and Mary Mapes Dodge, among them—and to take part in what was considered, as she put it, a “novel experiment in plain living with high thinking.”

More than just a club, this was a community where people came to live. “The reigning queen of Broadway at that time had this house built for her,” says architect John Ike, referring to “Peter Pan” actress Maude Adams and the 1906 home he and his team recently restored and added to. The architect and his firm, Ike Kligerman Barkley, wanted to preserve the legacy of the residence while giving it a twenty-first-century life, which was precisely in line with what the homeowners sought. Together, they shared a passion for maintaining the historical integrity of the property, from its Shingle Style architecture right down to the salient details of its Arts and Crafts-era furnishings, many sourced from auction houses in Europe. “The house is rich in detail, texture, and patina,” notes Ike. “It is not what you typically see these days.”

Ike Kligerman Barkley’s portfolio includes a host of rambling summer “cottages” in tony places like Newport and The Hamptons. Often, as they did for this house in the Catskills, they take inspiration from McKim, Mead & White as well as Boston’s Peabody & Stearns, two notable turn-of-the-century firms that helped popularize the Shingle Style.

“Our strategy was to accentuate what was original,” says Ike, who explains that the project began with the razing of poorly conceived later additions and replacing them “in a coherent, respectful way.” This meant, for instance, keeping the shingles stained dark brown, and honoring details like roof pitch and window proportion and size of lights (glass panes) even in rooms that would be reconfigured. A wraparound porch outside the living room remains in place, as does a rough-faced rubble-stone fireplace and birch stair handrails. The use of local bluestone remains prevalent. 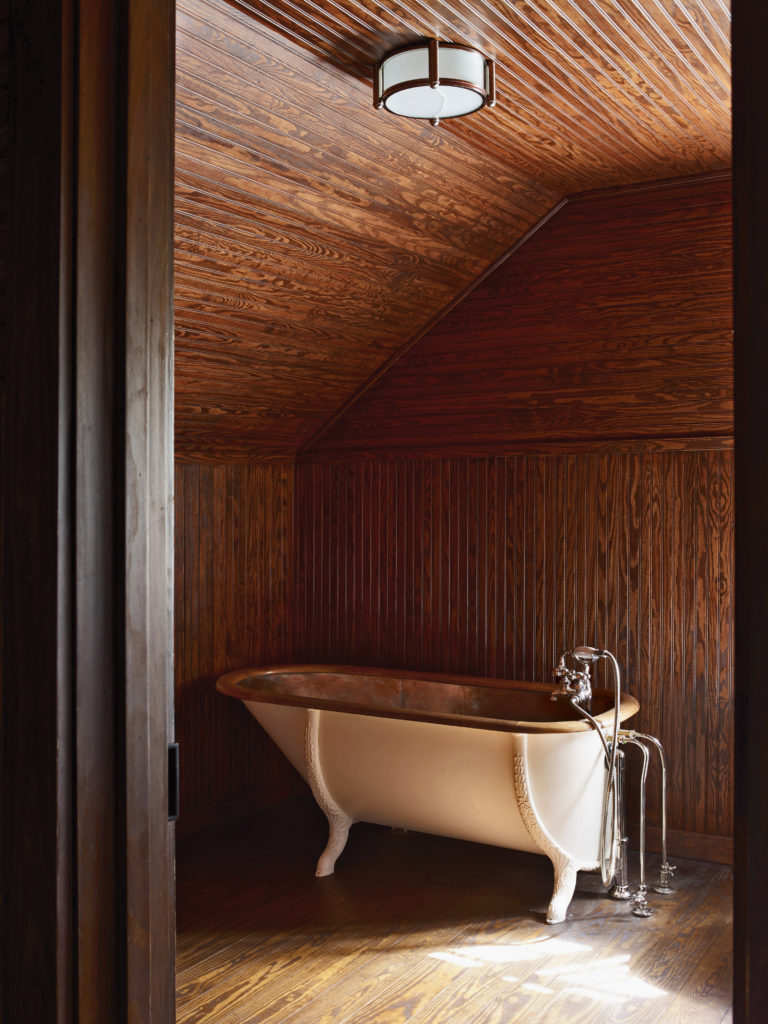 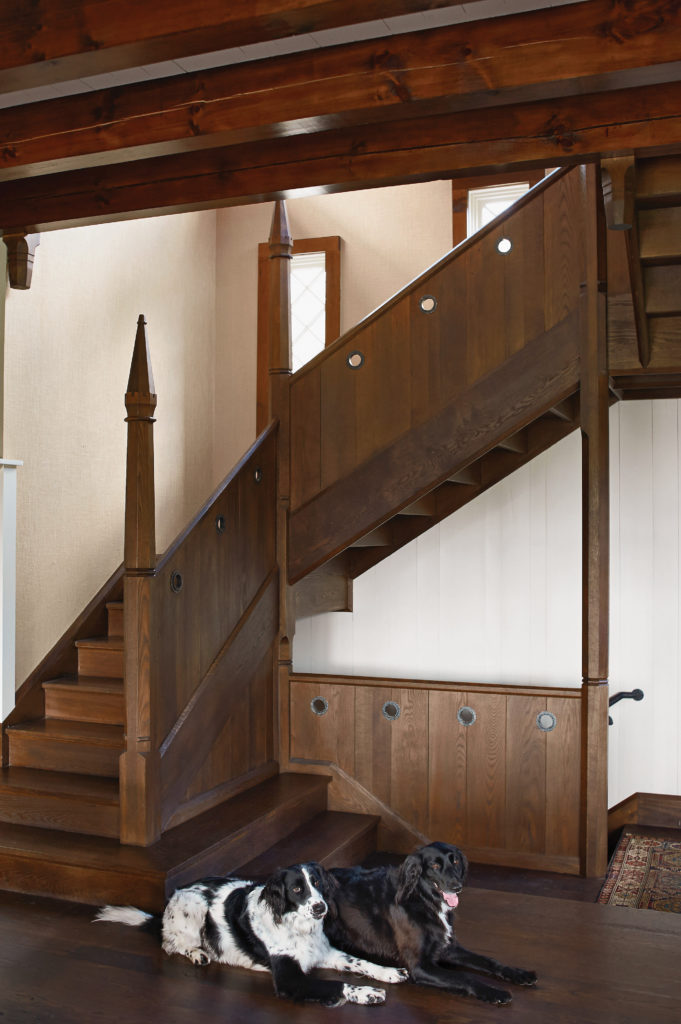 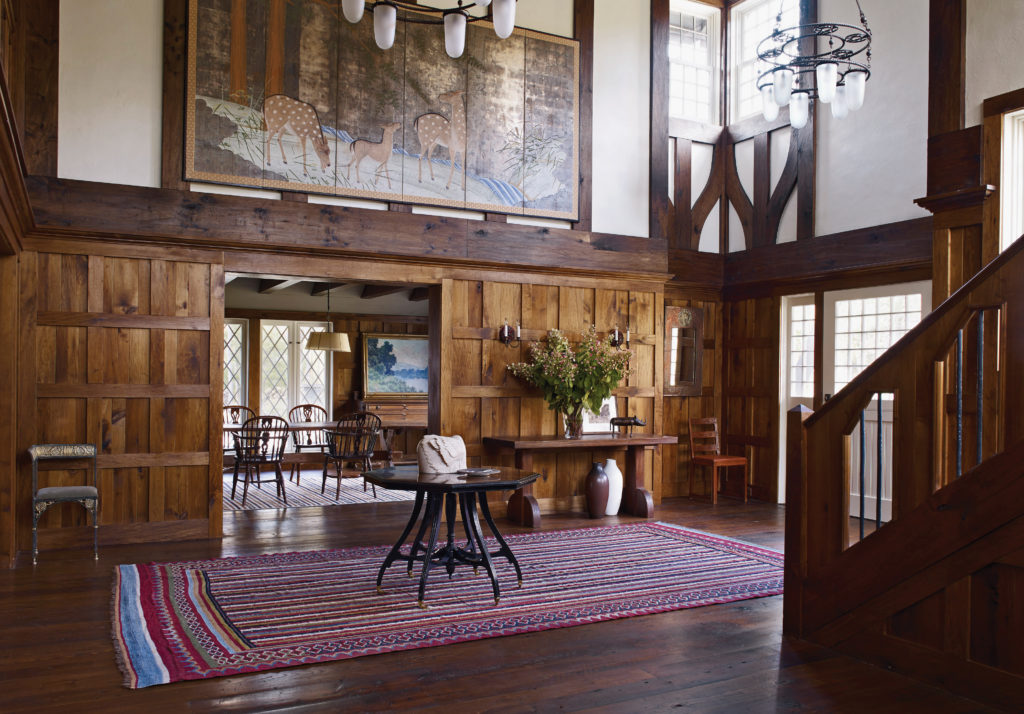 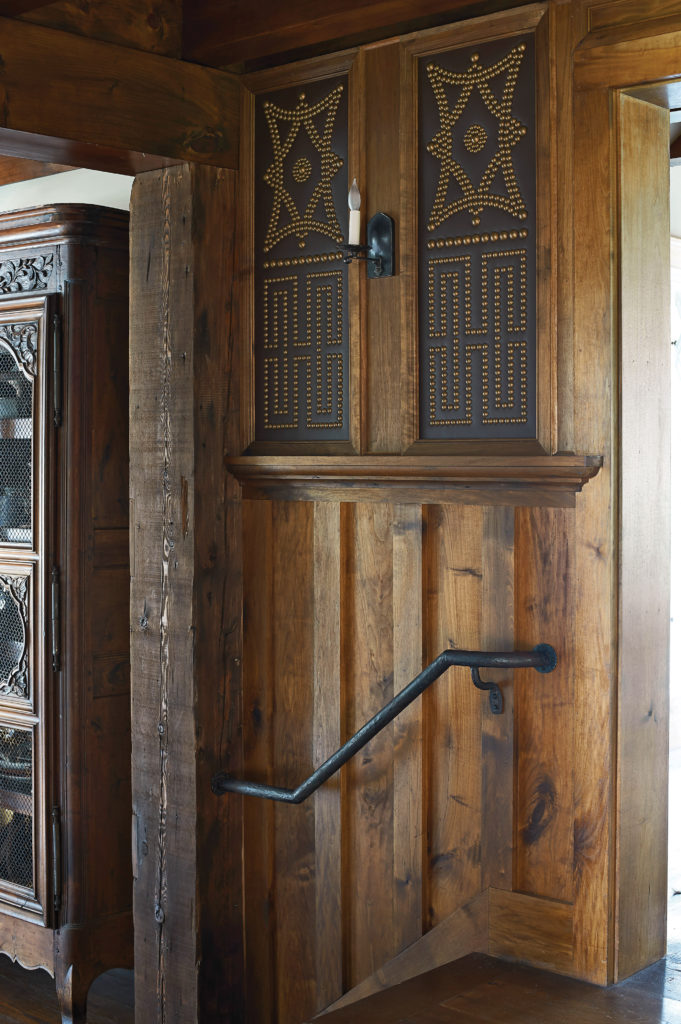 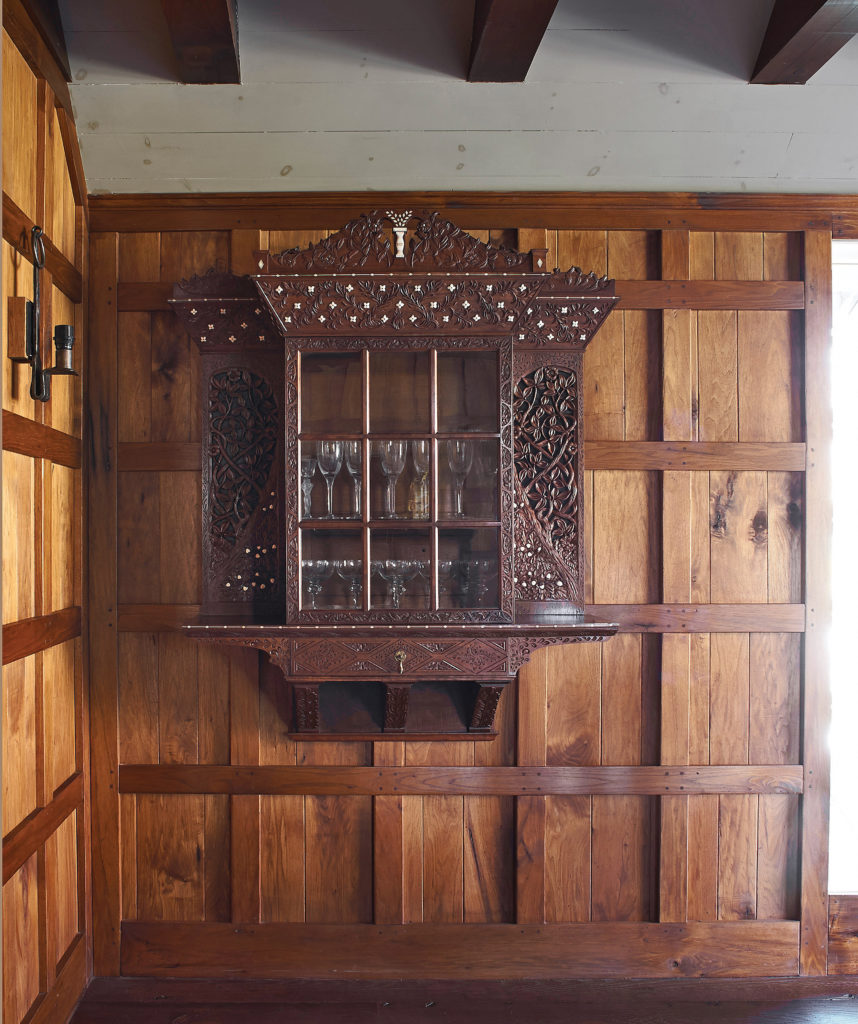 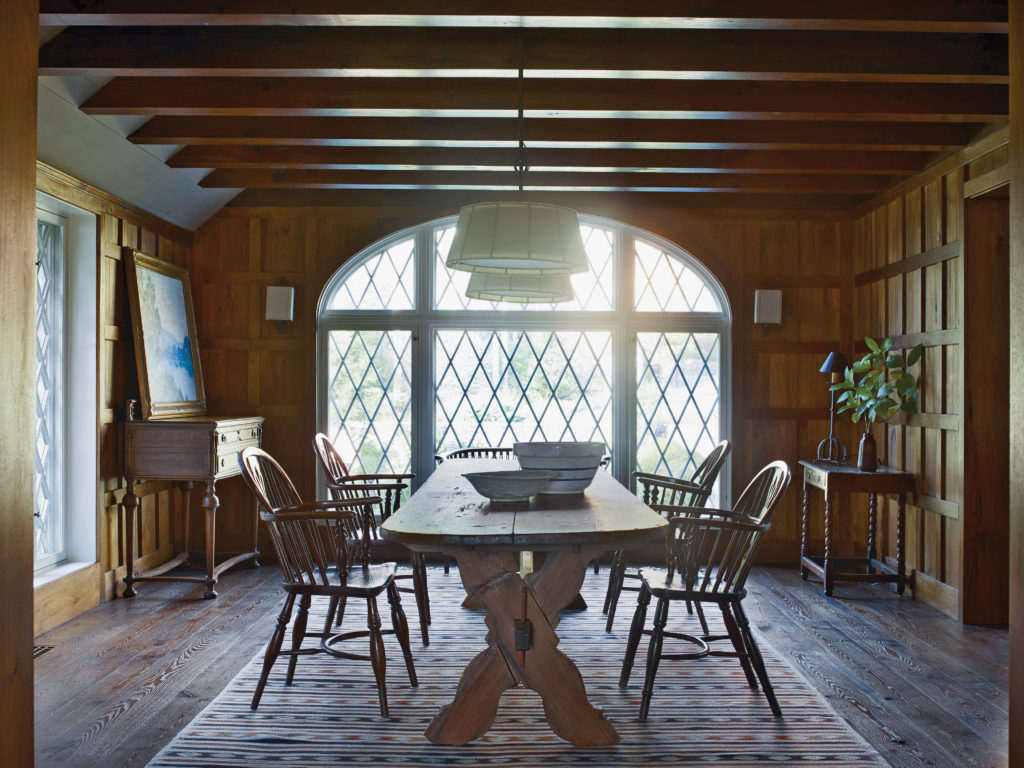 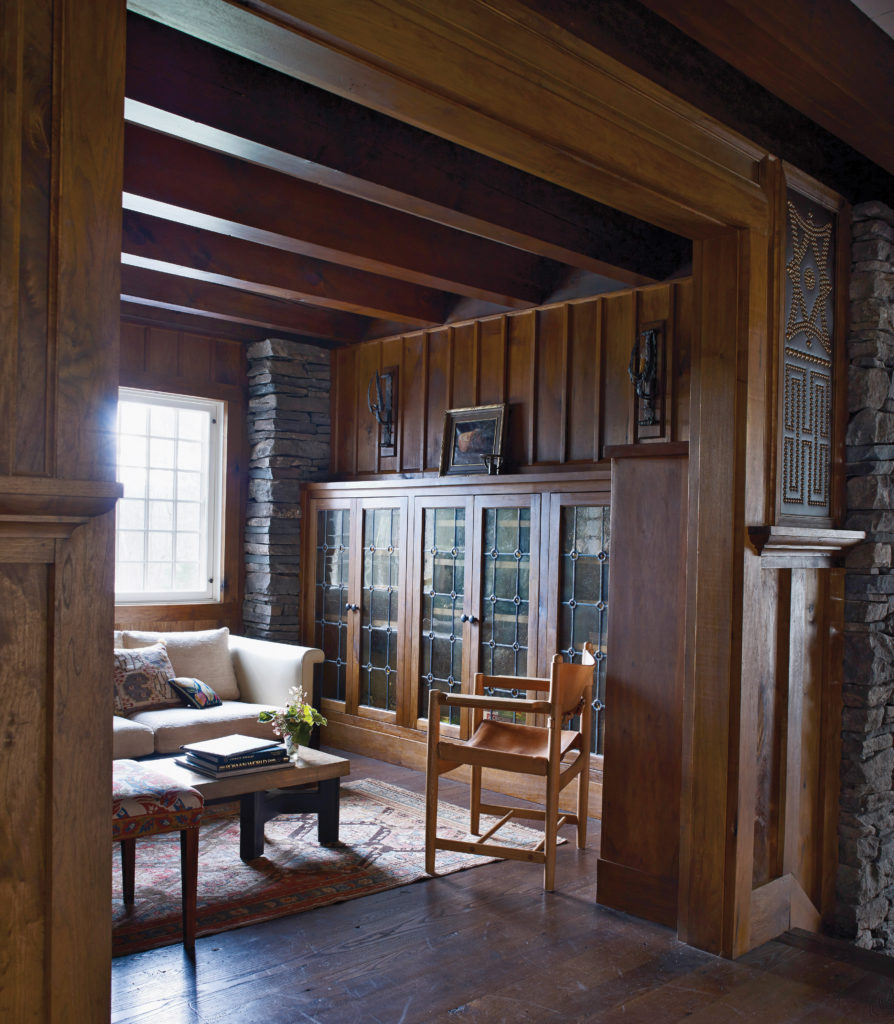 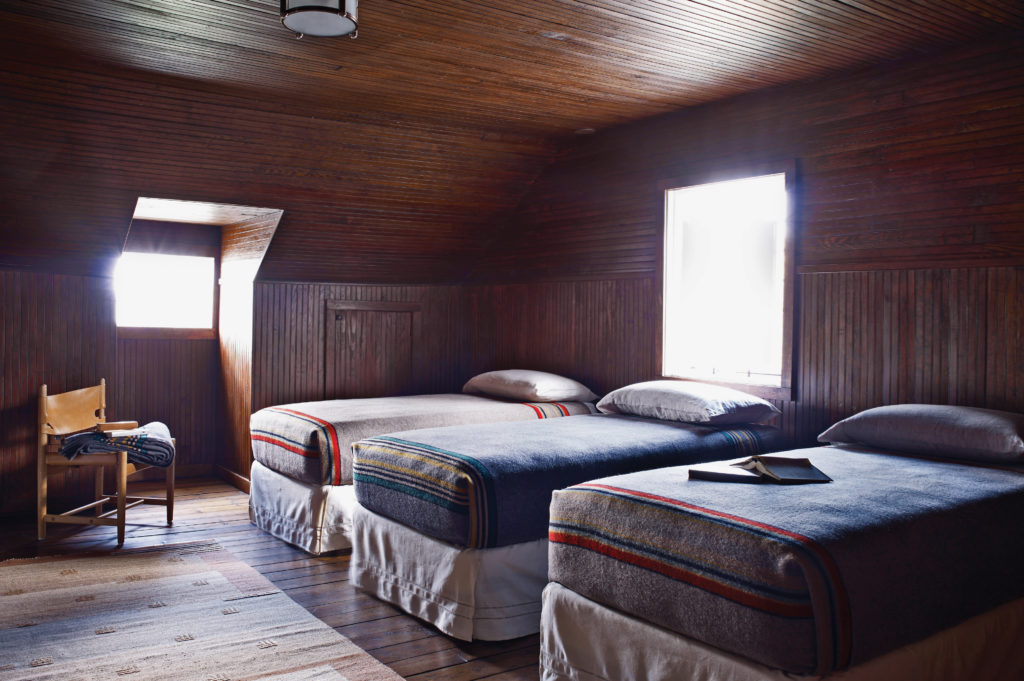 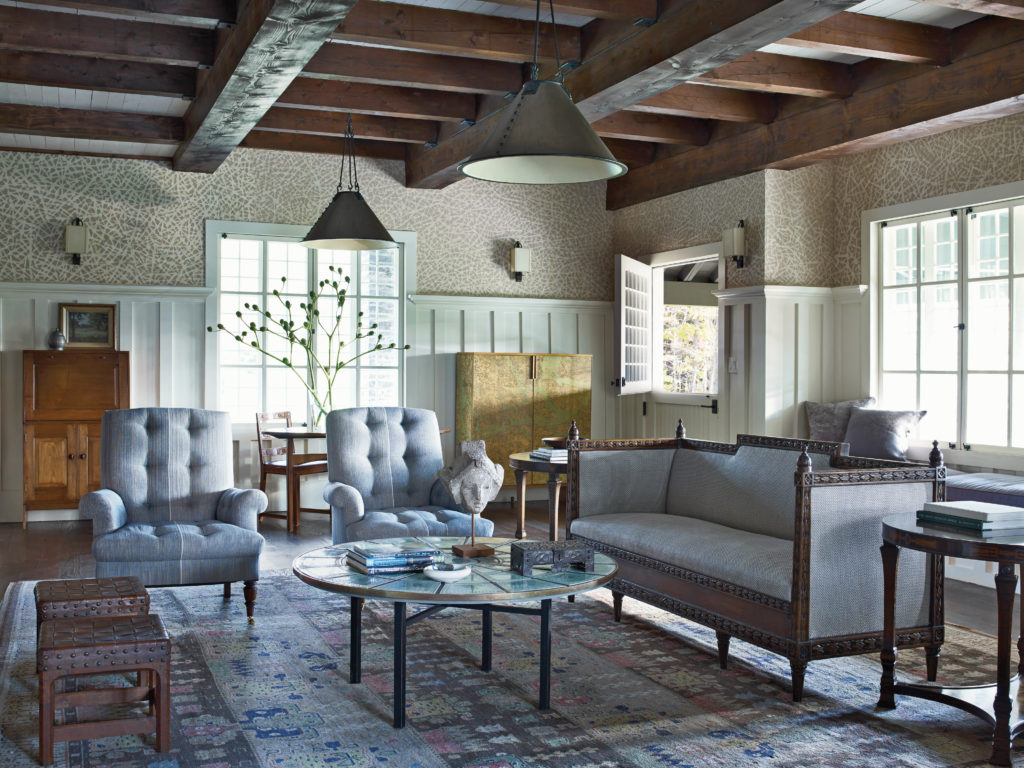 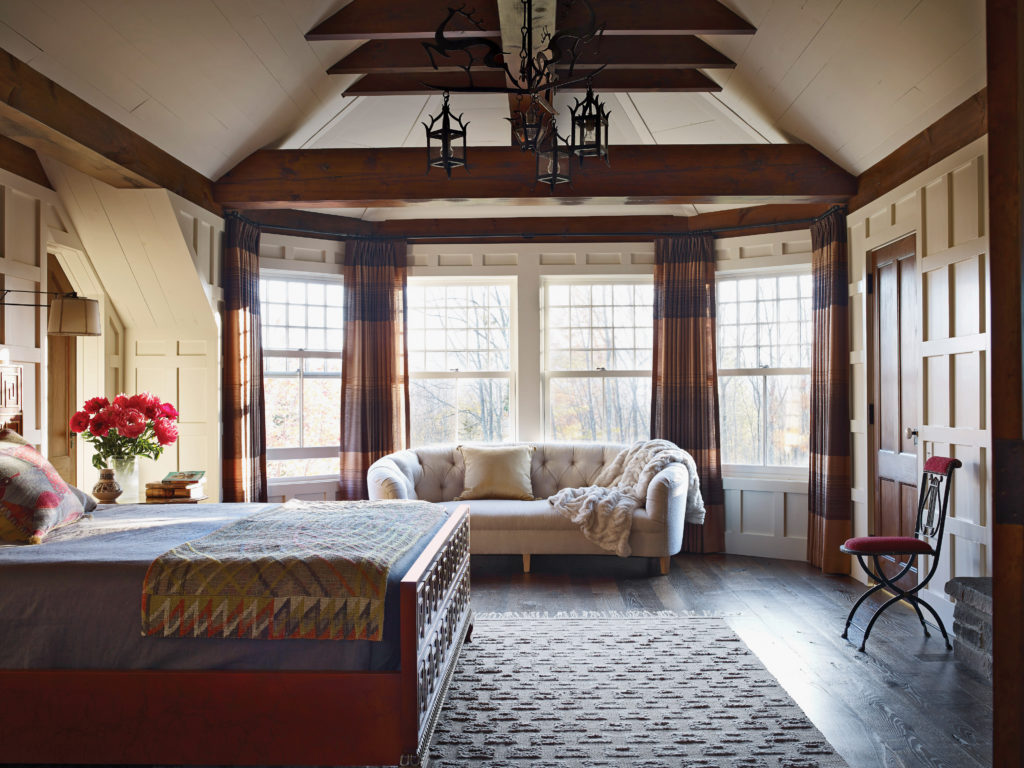 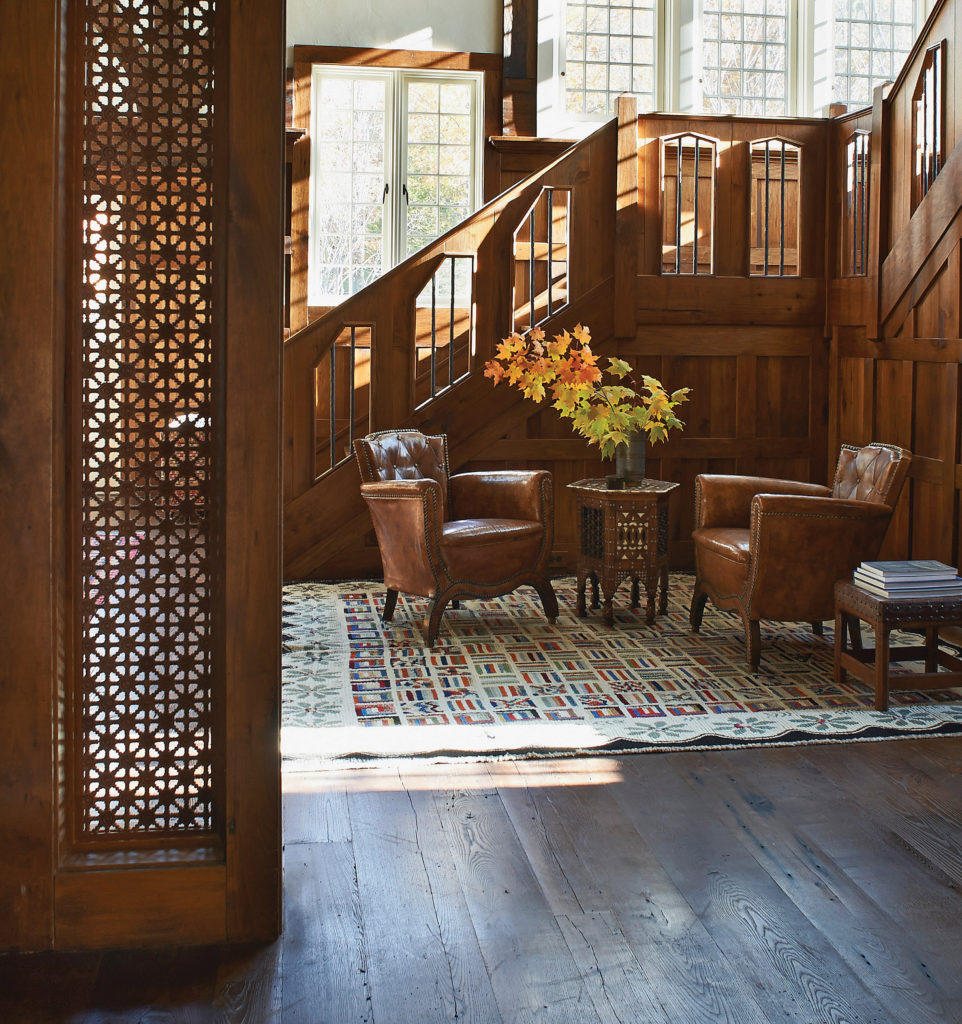 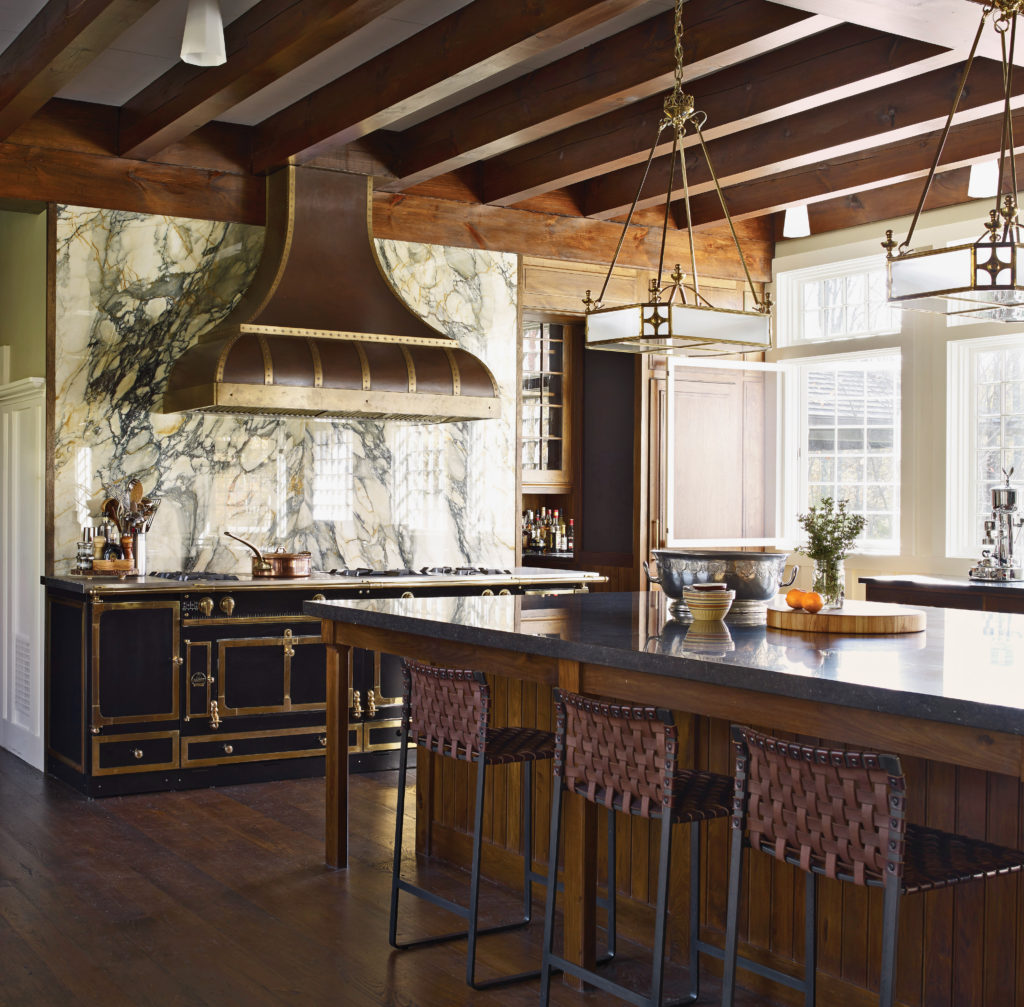 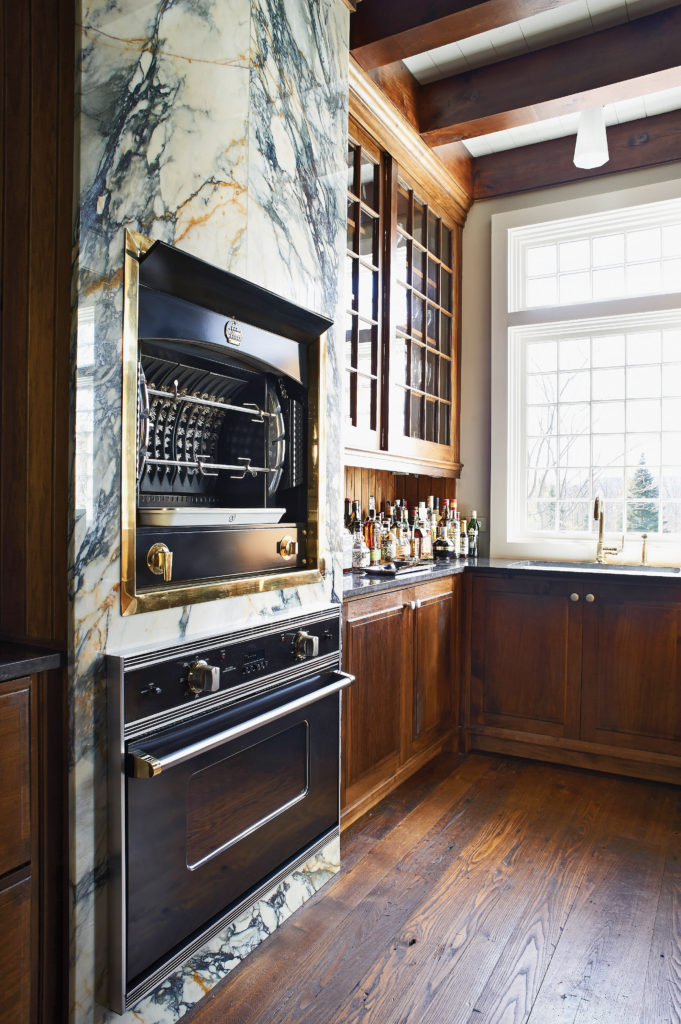 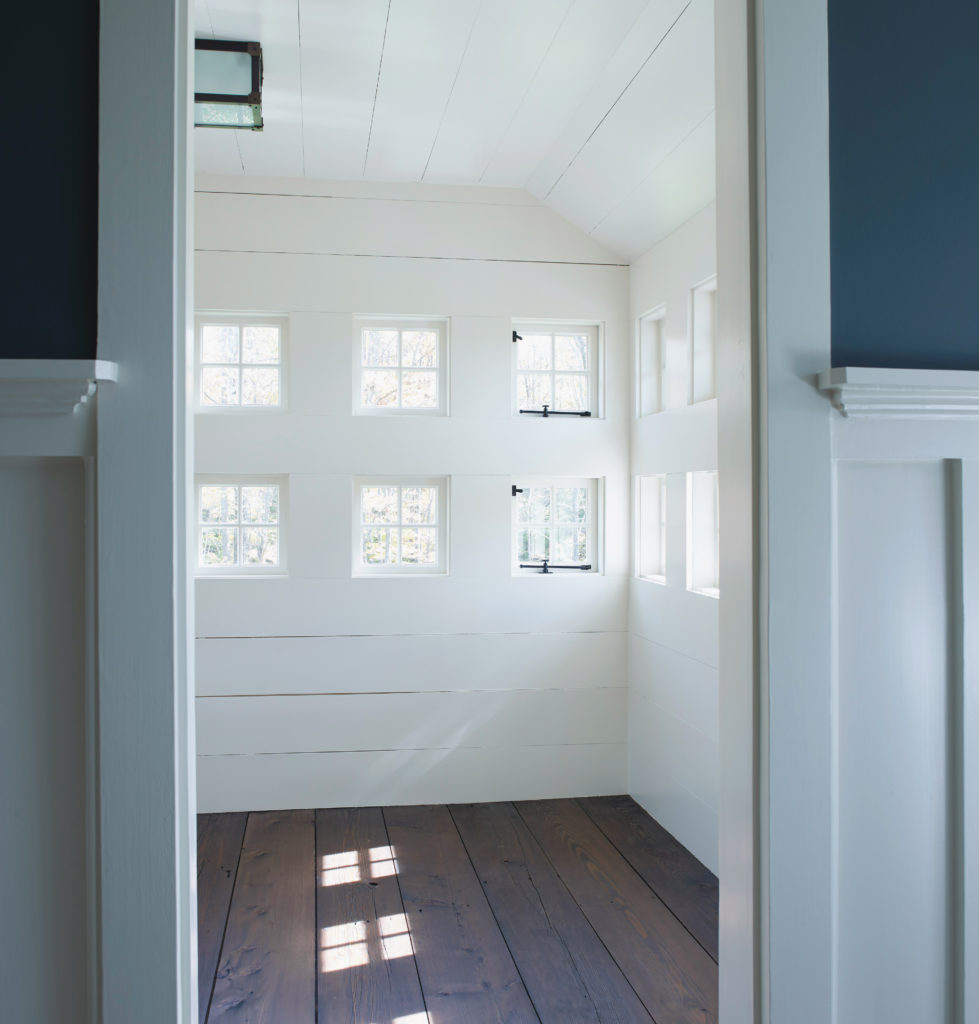 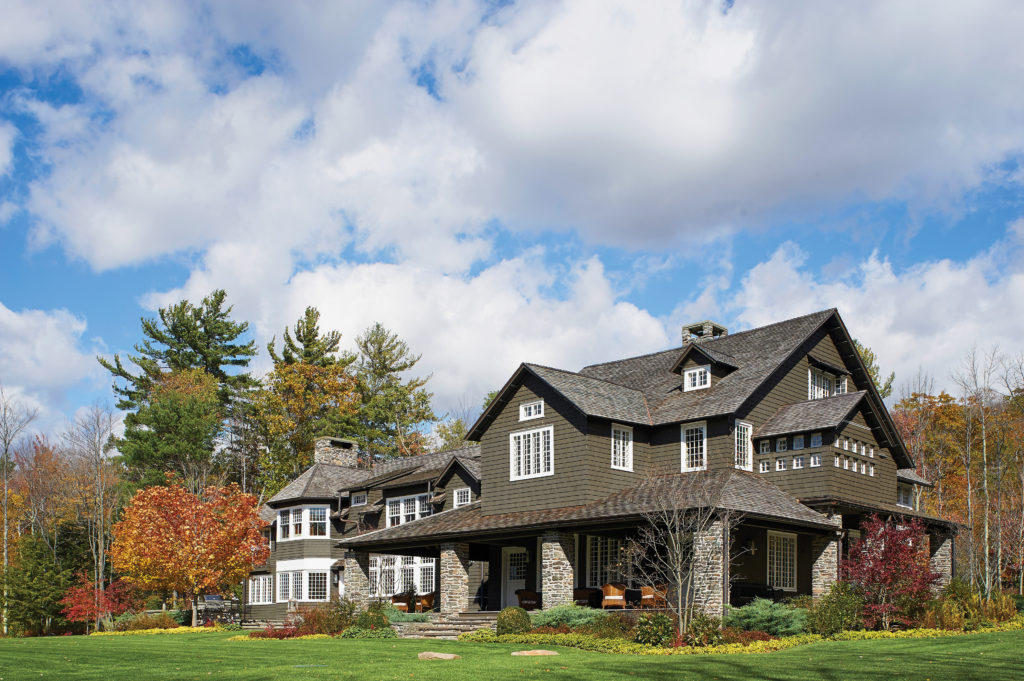 John Ike says the restoration of rooms in the original part of the house involved “riffing on the original materials like wide-plank chestnut floors, beadboard, and half-timbered walls of white oak and plaster,” all of which allude to the English Arts and Crafts tradition.

The new wing, which is slightly larger than the original core and extends off to the left of it, comprises a big, open kitchen and a family room, where the owners spend much of their time. Beneath a post-and-beam ceiling, kitchen cabinets mimicking those that McKim, Mead & White designed for an 1880s Rhode Island house work in concert with wide-plank floors and Petit Granit Belgian-limestone countertops. “What’s different [from the original house] is a big bank of windows that makes the room quite light and bright,” Ike says.

In terms of furnishing the house, the designers mined the entire world of the Arts and Crafts movement in Europe—particularly England and Scandinavia—and the United States.

Directly above this space, on the second floor, new bedrooms include a master suite and a child’s bedroom with an en-suite bath. In the old attic, a bunkroom enveloped in its original burnished beadboard—on walls and ceiling—invites dozing on old-fashioned steel beds equipped with Pendleton camp blankets.

“In terms of furnishings, we mined the entire world of the Arts and Crafts movement in Europe—particularly England and Scandinavia—and the United States,” says Ike. “We weren’t slavish to any one period.” Vintage Swedish and flatweave rugs from India mingle with English Windsor chairs and ebonized furniture prevalent during the Aesthetic movement that just preceded Arts and Crafts. A re-creation of Philip Webb and William Morris’s staircase at Red House distinguishes the back hall, while the new main hall is a double-height room incorporating reclaimed wood and iron.

Ike Kligerman Barkley succeeded in infusing authenticity into the house, resulting in a layered richness that spans countries and epochs, united by a respect for history, a knowledge of how things are made, and a love of craft. One can’t help but think that Candace Wheeler, who in 1887 was looking for a place “where we could build a camp or cabin and live a wild life for a few summer weeks,” would approve.