It was March when the couple first visited this cabin on Isle La Motte in Vermont’s Lake Champlain. “Everything was looking forlorn,” Christine Salembier remembers. “We walked to the cottage, then onto the porch…it was love at first sight.”

She laughs when she recalls how she and her husband, George, peeked through a window in 2002. “It opened up. So we gave ourselves a tour.” They’d seen the listing at an agent’s office: 22 acres with a 19th-century barn and a cabin built in 1935, on an island in the lake, accessible by a causeway. After their visit, it took one day to close the deal.

Years ago, the Salembiers had owned a summer camp on Lake Dunmore, but they sold it as their daughters reached high school. George was immersed as a professor of education at the University of Vermont in Burlington, and Christine was COO of an environmental NGO. They had a big white Colonial in town. But still, “we had a hole in our hearts,” Christine says. They missed the camp and longed for a replacement.

“We had to sell the Burlington house to buy the lake camp,” George explains. “Then we said, Uh-oh, where will we live in winter? So we bought a two-bedroom condo. The camp is where we’re at home.”

Isle La Motte, just seven miles long and two miles wide, is in the northernmost reaches of Lake Champlain. It was named after the French soldier Pierre La Motte, who built a military outpost here in 1666, in a place strategic to New France. Historically a farming island, Isle La Motte now receives an annual flood of summer residents. One of the earliest of these, a John Gainor, built the two-storey, side-gable cottage at the shoreline, fronted lakeside by an expansive screened porch.

Entering from the porch, to the right is the living room, anchored by a huge fieldstone fireplace built of local rocks. The rustic room is a throwback to New England Arts & Crafts-era design, with a bold, large-scale, flat-paneled wainscot made of hemlock that was harvested from the property. Recesses in the wall above are lined with blue-green fabric printed in a small pattern. The deep ceiling beams, like the paneling, wear the gentle patina of age. In the dining room to the left, the hemlock wainscot has panels of pale birch. A massive, black-metal, candle-burning chandelier descends over the table.

“We were lucky,” George says—“the house was in pretty good shape when we bought it. We used to have mice in the winter because there was no subfloor downstairs. We put in a heavy-duty subfloor and new Southern-pine floorboards, and we haven’t seen a mouse since!”

The family also rebuilt the original windows, fitting the sash weights with new rope. They repointed the stone fireplace, and reshingled the second floor after installing rigid insulation.

Their landscaping efforts include a large vegetable garden, George’s province. (Christine cooks what he grows.) They painted the barn, and built a dock for a small flotilla. Otherwise, they were delighted with the house as it had been, with original bedroom ceilings of varnished beadboard, the old sinks, and especially the original cabin kitchen.

Treated to new cedar flooring, the screened porch effectively doubles the living space. “We eat dinner on the porch every night,” Christine says, “loving the view of the Adirondacks to the south, Canada to the north, and of course the lake to the west.

“We stay here for weeks at a time, and every weekend from earliest spring until late fall,” she says. “We bicycle around the island and do a lot of cooking. Our daughters come to visit, and they don’t want to leave.” 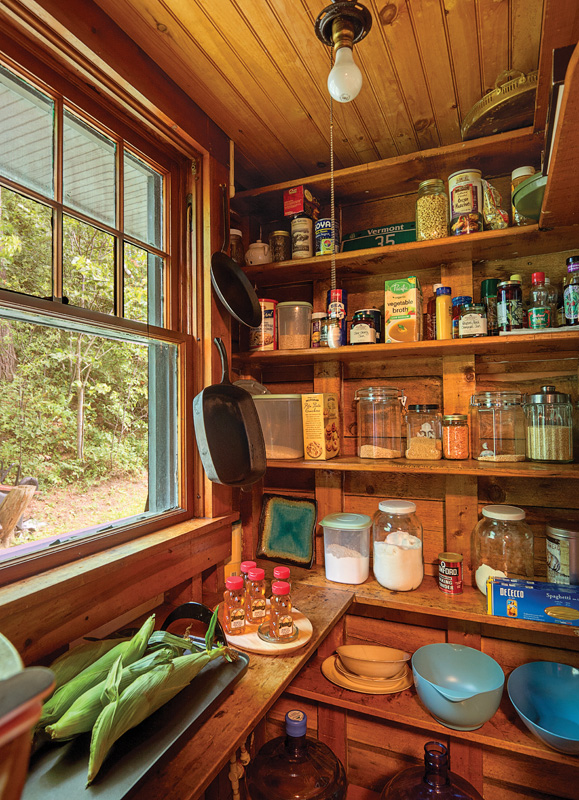 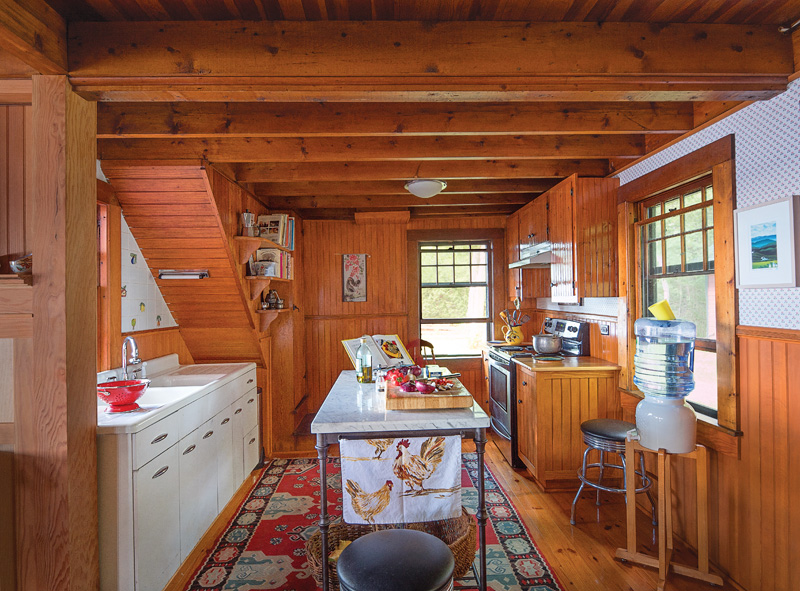 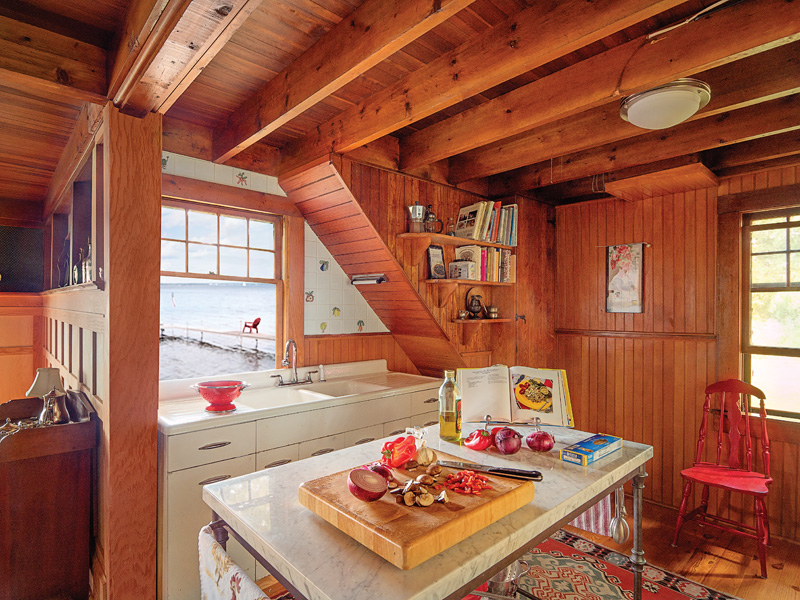 By today’s standards, this is an eccentric kitchen. It is also quite charming, a reminder of simpler days and life on vacation. Christine Salembier says it’s one of her favorite things about the house. Tucked into a corner of the building, the kitchen adjoins the dining room and accommodates the staircase that heads up to the bedrooms.

Varnished beaded boards face the cabinets built around the range and vent hood. In the center is an island—just a marble top resting on a metal base. The original sink, in its 1930s metal cabinet, is set against the opposite wall. Open shelves keep necessities handy. Christine added the Sears worktable and a wooden chair painted red. 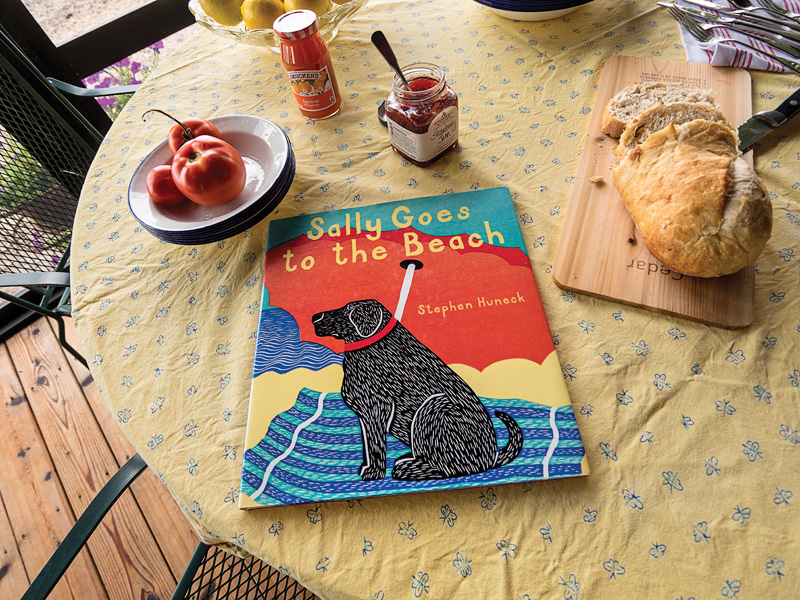 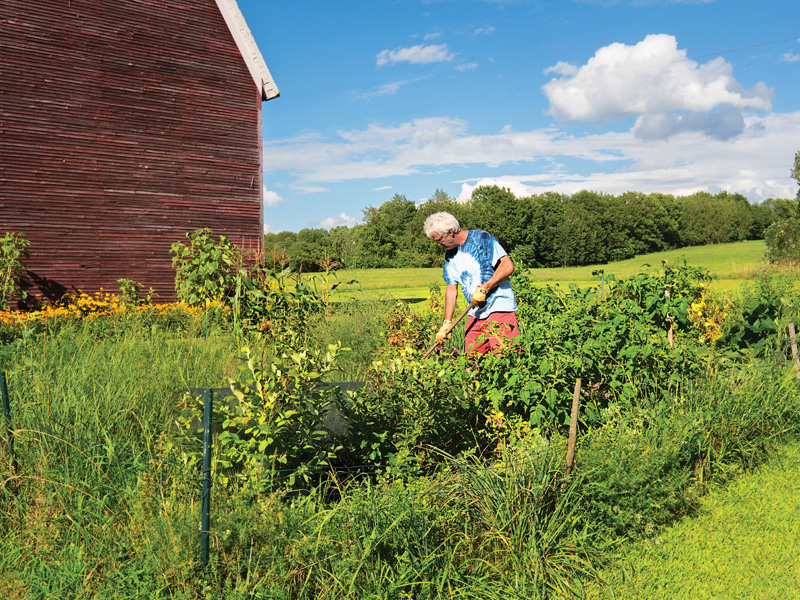 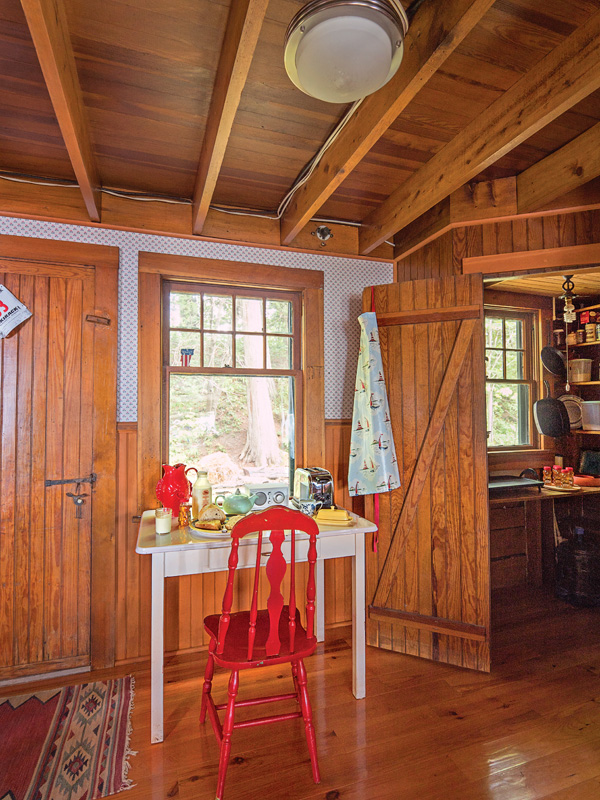 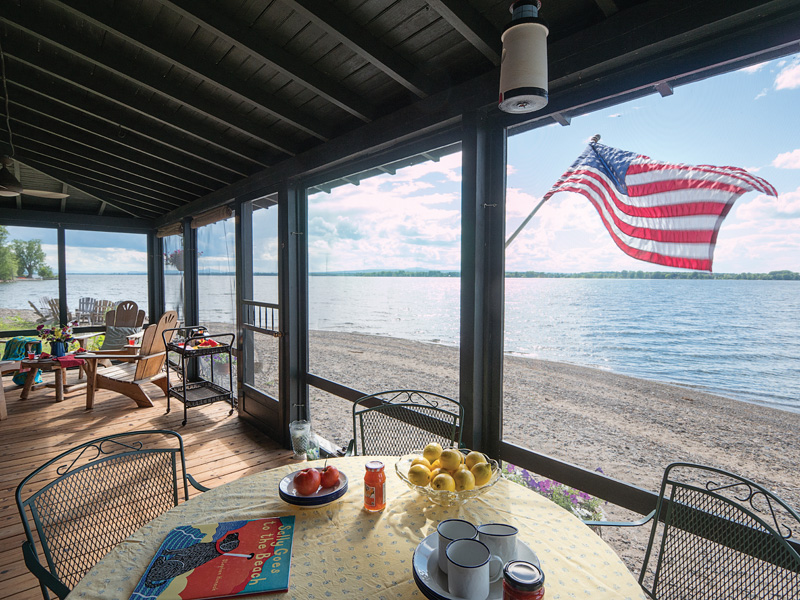 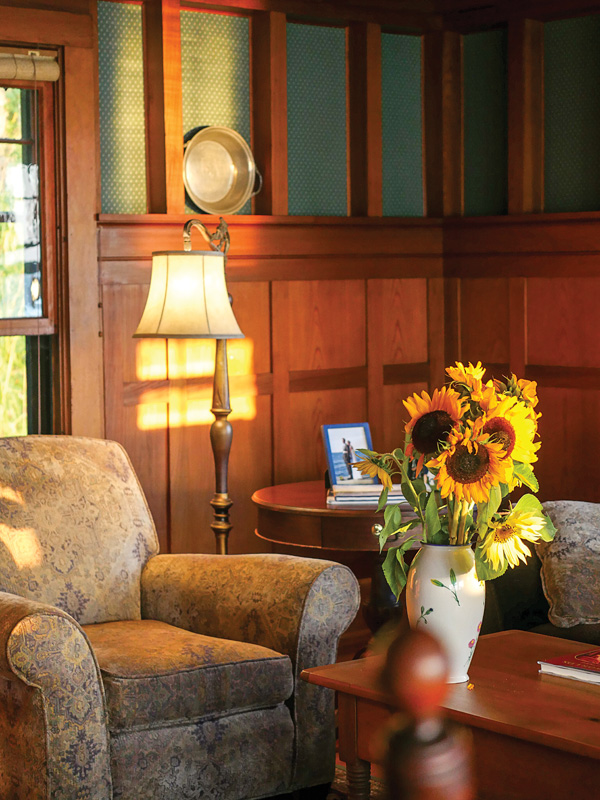 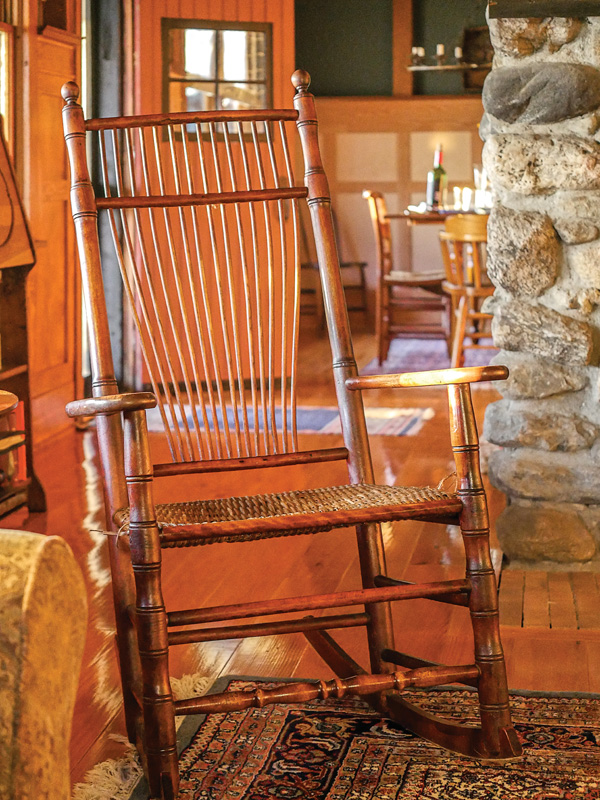 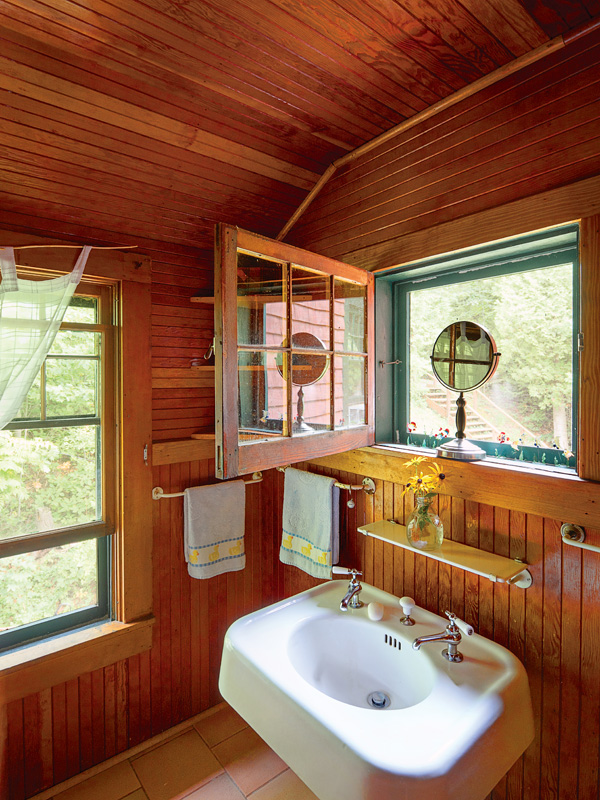 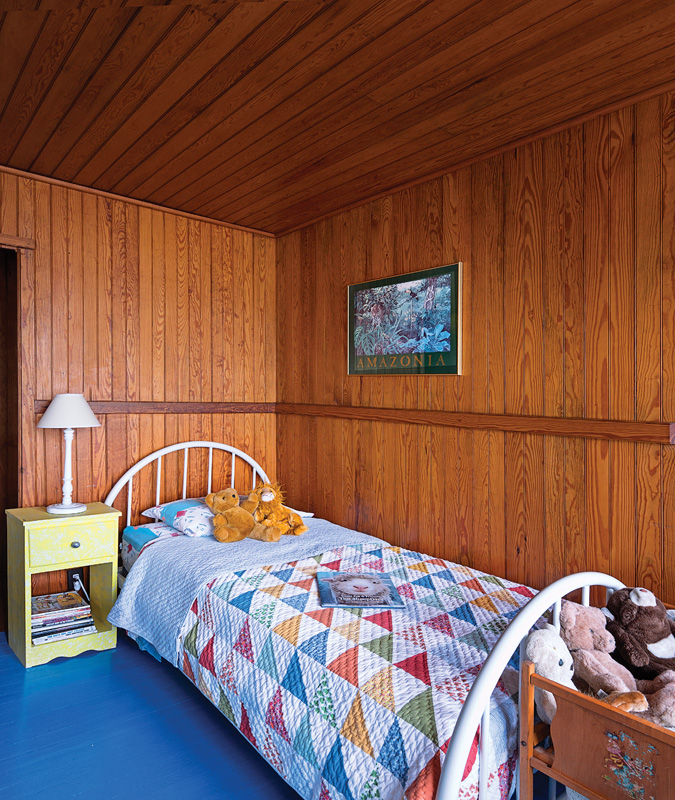 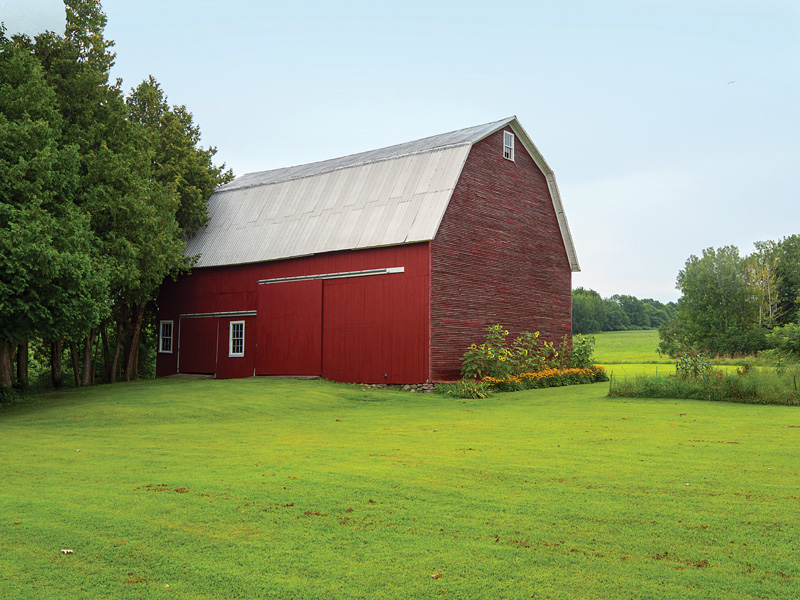 Restoring a Victorian House in Cambridge