Nestled between the Adirondacks and the Green Mountains, this Vermont lake house is livable year-round—a reversal of its history. Built as a summer cottage in 1922, the house remained in the same family for most of the 20th century. But it was virtually abandoned for 35 years, owing to a family feud. Not until it was sold to Anne and Donald Stewart in the 1990s did the house come back to life.

“We’re the first to call it a year-round residence,” Anne says. “We upgraded things so the house would feel like a home instead of a camp; for example, we built custom doors for the closets, replacing curtains hung on tension rods.” 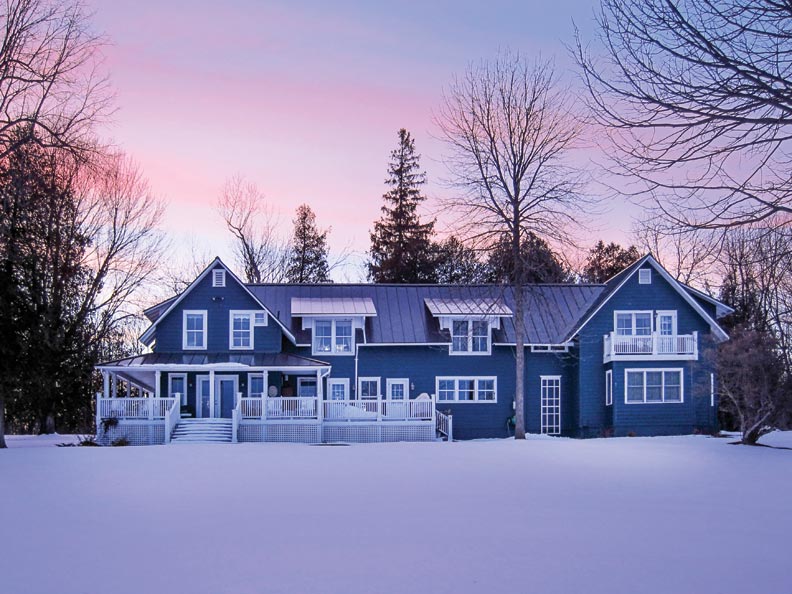 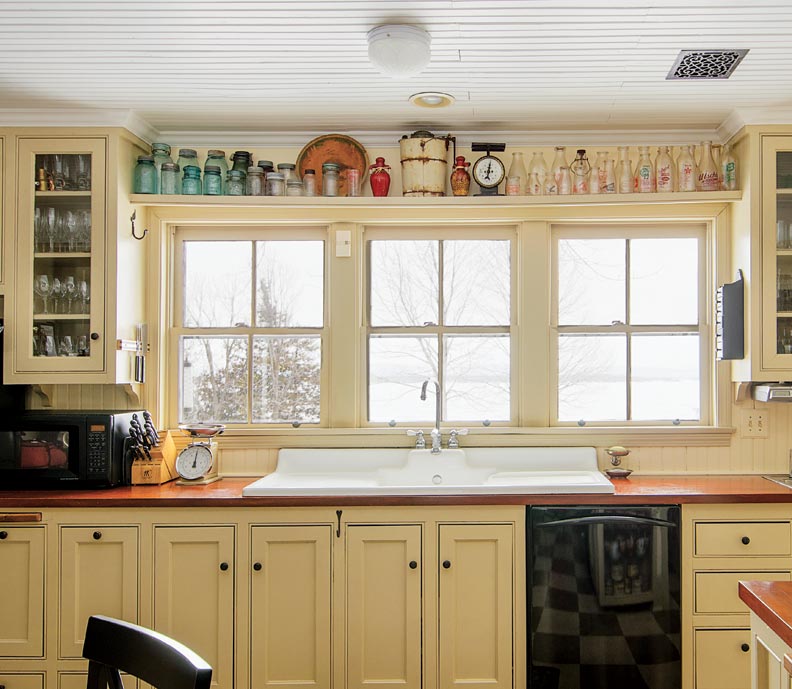 The location is gorgeous—and historic. The house is on North Hero Island in Lake Champlain. It and South Hero Island were named after Revolutionary War heroes Ethan and Ira Allen: “Ethan came to the island with a cart to get hay,” Anne explains, “but he fell off on the way home, and died a few days later. The governor honored him and his brother by naming the islands for the heroic roles they’d played in the war.”

North Hero Island is connected to the mainland by bridges built in the early 20th century. The house is a vernacular New England farmhouse influenced by the Colonial Revival. An addition dating to the 1990s follows the structure’s original linear orientation, extending sideways. “The house is long and rambling,” Anne says. “It was designed that way so that each room would have a lake view.”

The living room flows into the dining room, where a swinging door leads into the kitchen, then on to a butler’s pantry. The 1990s mudroom and family room are next in the parade of rooms. Three bedrooms and a study upstairs are strung along, one room deep.

The Stewarts made significant improvements. They added some new flooring, a new heating system, and new electrical service. The chimney has been relined, and the appliances are new. They also switched to a standing-seam metal roof. “It’s sturdy as all get-out,” Anne says about the traditional New England roof type.

Upgrades to the interior were cued by existing elements in the old house. Anchored by an original fireplace of local fieldstone, the living room now has wainscoting based on that in the dining room. New bookcases in the living room pick up on moldings used with the original beadboard ceilings (in the living room, dining room, and kitchen). Brightly printed fabrics and rugs were chosen for easy maintenance and to hide stains. “We didn’t want to fuss,” Anne says. A painted floor and walls done in a gentle cream color attest to her simple decorating approach.

The couple at first used linoleum in a traditional black and white checkerboard pattern on the kitchen floor, but the subfloor was uneven, and the material cracked. They’ve replaced it with a floating laminate floor over engineered hardwood. They painted white kitchen cabinets with a softer bisque color familiar from the past. Existing butcher block countertops were stained and burned, so they got a good sanding and then wood stain and three clear topcoats. Besides the modern range, the room has a reproduction 1920s wood-burning cookstove from Elmira Stove Works, adding to the farmhouse air.

Old-fashioned, too, is the personal collection of kitchen wares displayed on a shelf over the sink. It started with Anne’s Italian grandmother’s ice-cream maker and kitchen scale, along with milk bottles collected since Anne was a child in Wisconsin.

“The milk bottles are from home, from France, from all over, and they have family connections,” Anne says. “The best collections start when you’re young.” And end up in a true family home.

A Dutch Colonial Full of Character

What to See on Boston's North Shore