The Vermont farmhouse, which included an attached carriage barn, had been split into a duplex at one point, and the two sides were in total opposition to each other. Miraculously, the old farmhouse interior was nearly untouched. It still had its original maple and birch flooring and butternut wall paneling and trim—even an original tin tub.

But its carriage barn had gone through renovations in the 1960s and 1970s—complete with adding a “contemporary” kitchen—that stripped away its original character. Although the house—with a split personality—needed help, Bob and Suzanne fell in love with its original qualities as well as the surrounding 180-acre farm, which came with a heifer barn and a dairy barn. Bob, who is in the medical research field, had lived in Vermont once before and dreamed of purchasing a farm where he and Suzanne, a translator, could live and telecommute—and this was that special spot. 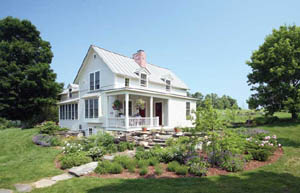 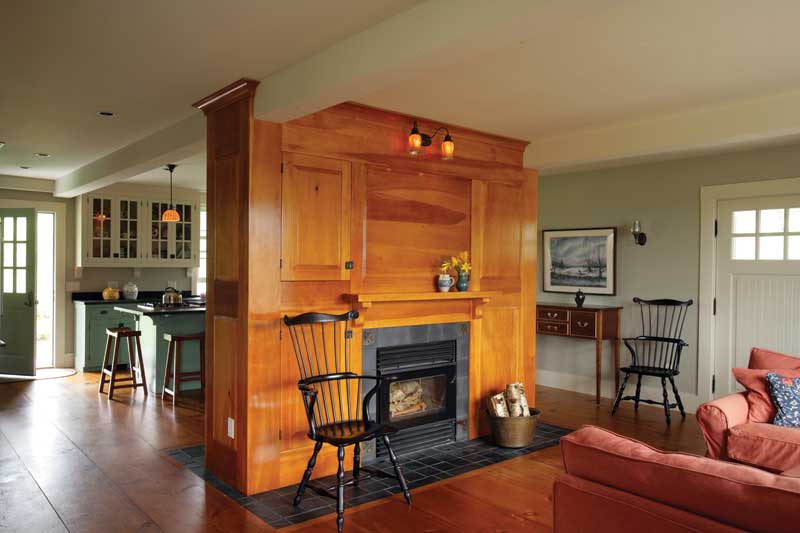 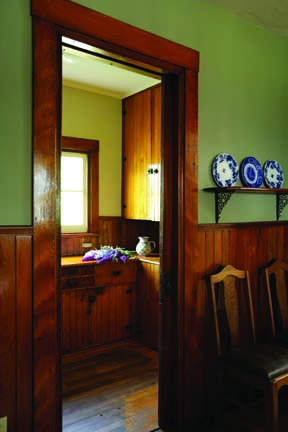 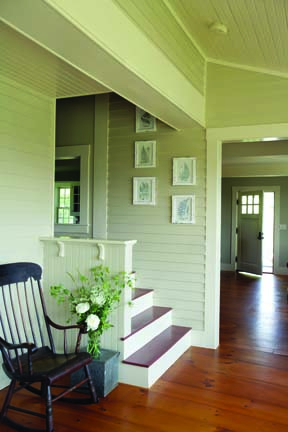 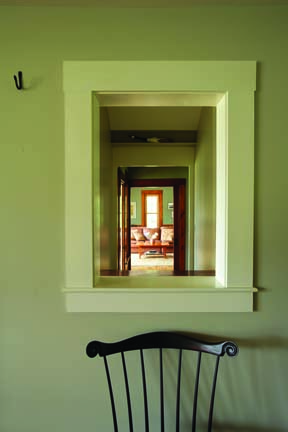 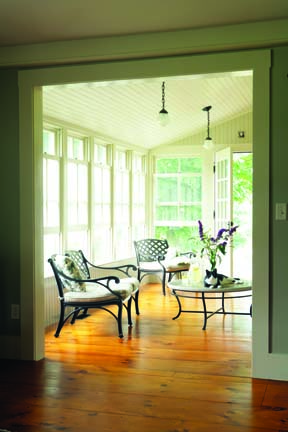 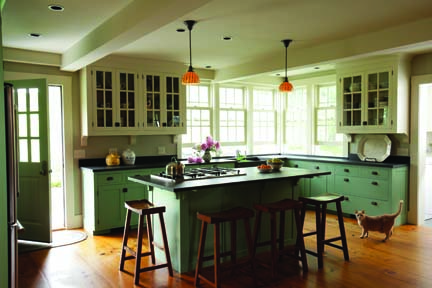 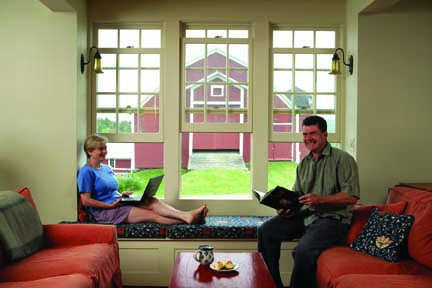 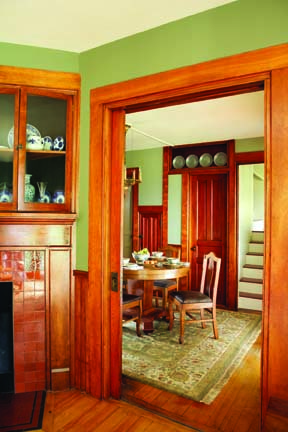 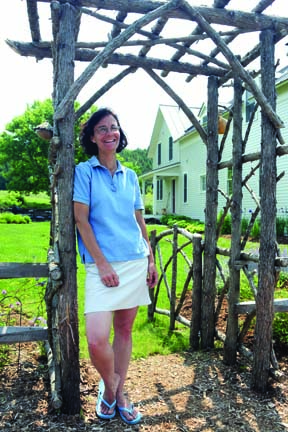 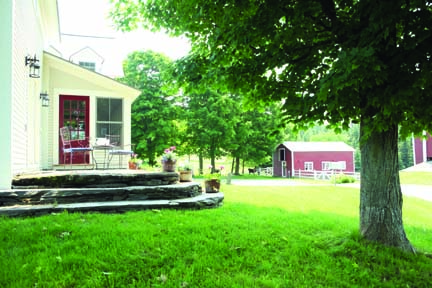 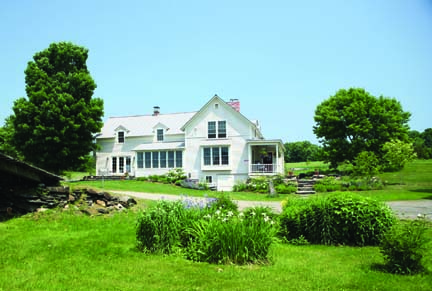 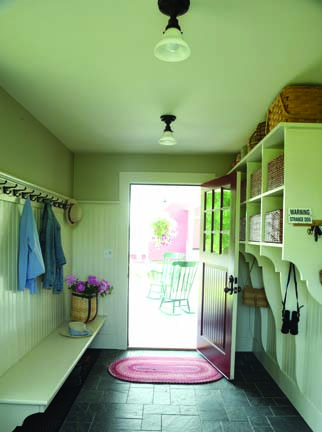 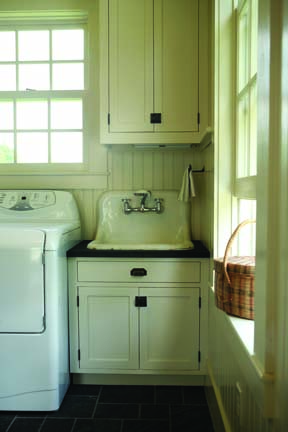 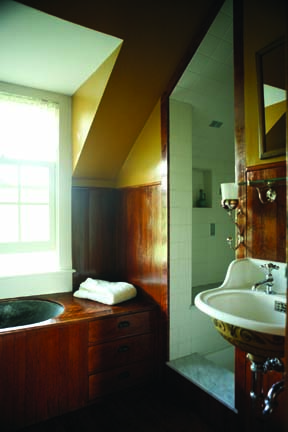 They hired local architect Sandra Vitzthum to tackle the issue of what to do with the Bipolar house. Bob and Suzanne recognized that Vitzthum had an excellent understanding of the house’s history—what was original and what wasn’t.

“The original house had small and cozy formal rooms, and we wanted to preserve them as best we could,” says Vitzthum. “But the secondary volume—the carriage barn—had been changed over the years and needed a complete overhaul to reflect Bob and Suzanne’s lifestyle.”

The couple wanted bright open spaces where they could entertain friends and family. They also needed a home office as well as traditional farmhouse spaces, such as the mud room and washroom/laundry, so Vitzthum designed new spaces within the carriage barn that would complement the original farmhouse yet offer these amenities. The old section—the parlor, dining room, and guest rooms—was assigned a quiet function, whereas the new section—the master suite, home office, kitchen, and family room—was assigned a more lively function, explains Vitzthum.

“Since we were gutting the carriage barn, we had a lot of freedom in the design,” says Vitzthum, who stuck to the original footprint of the carriage barn and designed within its skin. “We took the structure down to its barn board sheathing,” she says. “It was an old post-and-beam frame, so we had to work around these structural supports.”

One major change to the carriage barn was the roof. “Originally it had an unattractive hipped roof,” explains Vitzthum, “so I took some liberties and created a true gabled structure.” Another liberty Vitzthum took in the design was to create large window openings. “The original carriage barn would have had no windows at all,” she says, “but we added double-hung windows to take in the views of the fields and hills surrounding the house.”

The new kitchen and family room are in one space divided in the center by a freestanding wood-burning fireplace and mantel. “This design was really chosen out of necessity,” says Vitzthum. “There was a flue in the middle of the room that we could not move, so the fireplace became a way to divide the two areas without completely separating them.” Cabinetmaker Ron Walesch built the mantel with 24-inch salvaged pine panels, stained in amber shellac to harmonize with the butternut paneling in the older section of the house. The wall surfaces are continuous in this space—when looking from one room to the other, you feel as if they are tied together.

Vitzthum worked with California Paints’ historic colors collection for the kitchen cabinets. “We painted the lower cabinets green while keeping the upper cabinets white. This choice really lightens the space, and white cabinets also help break up the mass,” says Vitzthum. The center island has a cooktop and a large counter for prepping meals, with stools tucked under the island to offer seating for dining or simply visiting with the chef. Suzanne found antique bin pulls on eBay for the kitchen drawers. The flooring in the new space is white pine. (Bob planed the edges to give them an old look.)

“We really wanted to open the space up to the views,” states Vitzthum, who created a wall of windows wrapping the corner of the kitchen. “This would never have been done traditionally, but it creates unobstructed vistas,” she says. “I made the windowsill nearly even with the countertop—this furthers the notion that you are bringing the outdoors in. The window stools are soapstone, same as the countertop. A back door leads to a terrace and grill where the couple can entertain in warm weather.”

On the front of the house, the glassed-in sitting porch, which was originally the entry, had lost its identity long ago. Vitzthum carefully redesigned this tertiary space: The sitting porch’s ceiling was taken down and refinished with a new beadboard ceiling, and unappealing metal casement windows were replaced with double-hung windows that look toward the original dairy barn. She also reconfigured the staircase, adding a bottom leg run. A small window above the landing offers views from the sunporch into the kitchen and beyond to a stone folly on the hill. “Whenever sight lines can be extended through multiple rooms, it makes the rooms feel larger,” says Vitzthum.

While Vitzthum prepared construction drawings, Bob, whose hobby is furniture making, restored most of the woodwork in the original farmhouse himself. It had been spattered with paint and had several layers of dirt and grime. He gently applied denatured alcohol so as not to lose the patina; he then added a fresh coat of shellac to bring out the figuring in the wood.

Where flooring needed to be replaced, Bob hand-planed the edges of the floorboards to give them the appearance of being authentic. He finished the tongue-and-groove flooring with shellac and then a final coat of Danish wax.

Vitzthum also wanted to wed the house to the landscape. “Many old farmsteads were divorced from the land,” she says. “Farmers in the 1800s worked outside but did not ‘live’ outside. Today people entertain outside, so we wanted to make sure these outdoor living spaces existed in the plan.” Stones for the patio were gathered from the fields, and wonderful cutting gardens meander along walkways to the new entryway. “We moved the original entry from the front of the house to the end of the house and created a new front porch,” she says.

Today, Bob and Suzanne’s farm is home to llamas, sheep, geese, chickens, goats, cats, a parakeet, and Ivy, the one-eyed dog the couple rescued. Most of the 180 acres have been put into a conservation easement to be kept as open farmland. The couple leases 60 acres to two farmers who grow corn and alfalfa, and the rest of the land is part of the Wildlife Habitat Incentive Program.

Wild apple trees, birches, and evergreens grow along the hill. The old red dairy barn still has its milking stalls, with dates penciled on the walls of when the cows were milked and how much milk they yielded; Bob’s woodworking shop is now located in the barn as well. The couple’s objectives of paying tribute to the home’s roots as a working farm have truly come together by honoring the old and celebrating the new.