When she was a graduate student at the University of Arizona in Tucson, Lisa Harris fell in love with the Sam Hughes neighborhood. A square mile of picturesque adobe, brick, and red-tile roofs, it’s a National Historic District, named after 19th-century city leader Sam Hughes. Lisa couldn’t afford to live here as a student, but once she began working, she started house hunting. Her parents’ weekend hobby was designing and building homes, so Lisa had grown up amidst hammers, sawhorses, and blueprints. Renovation was in her dna, so she wouldn’t mind a big project requiring heavy lifting.

Built in 1940, the little house of stucco and red barrel tiles was nestled in a quiet cul-de-sac. Lisa was intrigued: it was set on a double corner lot, but had obviously been through hard times. Owing to a prolonged divorce, the house had sat vacant for several years. The lights didn’t work—wiring was both faulty and decaying. The original, mammoth gas furnace was, the building inspector told Lisa, an explosion waiting to happen. Carpeting was ripped and filthy, the stuccoed interior walls were cracked. Oak floors had rotted over subflooring infested with termites. Most of the appliances had been removed and the blackened bathtub was unsalvageable. The landscape consisted of a dying citrus tree in back and a long-dead lawn in front. An addition holding three bedrooms and two baths dated to the 1980s, with access through the carport. It was so underbuilt, a flushing toilet could be heard from outside.

Lisa reminded herself that she was an experienced remodeler. She did not know that the project would take nearly two decades and eventually involve lawsuits, two different architects, a change in contractors, two kitchen designers, and a decorative painter with a serious drug habit.

She began with demolition, working on the house every weekend for a year, enlisting the help of friends with work parties. Lisa ripped out mildewed carpeting, plywood kitchen cabinets, and the rotted floors. She cut down a thick vine growing into the house through a crack in a porch window. Lisa had hired an architect to plan the renovation, but that designer told her she was moving too slowly and could never afford what needed to be done.

So Lisa found another architect, who understood the vision. A new foyer, living room, library, and master bedroom would replace the flimsy addition. The original 1200-square-foot house would be enlarged by enclosing the back porch for a new kitchen. Floors would be leveled and rotted windows replaced with period-style, crank-operated casements. In honor of the street name (and inspired by a picturesque house across the way), Lisa also would add three rotundas: for the entry hall, for a library, and as an adjunct to the kitchen.

Construction began in 2002, just when Lisa had her second daughter. The 1980s addition was demolished and the new wing begun, on schedule. At the same time, craftspeople worked on the original 1940 space, retiling bathrooms and cleaning up the exterior. Original barrel tiles were salvaged and used along with new tile.

The contractor had made a series of mistakes, his subcontractors even more. Kitchen ceiling beams were cut incorrectly, the crawl space was unvented, floors in the new addition were two inches lower than those in the house. The rotundas were improperly roofed. As lawsuits were settled and a new contractor enlisted, the house sat for six months ringed by construction fencing, black plastic tarps covering the new roofs as weeds grew in the yard. Lisa admits that friends stopped asking her for trade referrals. And plans for quarters over the garage were scrapped when a neighbor complained that guests would be able to see into their backyard, where she liked to skinny-dip in the pool.

With a competent and sympathetic contractor in charge, mistakes were corrected and projects finished. The new addition refocused the house; the circular entry room is now a grand affair in a central, two-storey rotunda. A master bed-and-bath suite opens off the living room with its vaulted, beamed ceiling. The circular, two-storey library was the last project. Its ceiling centers on an antique teak window from India, into which art glass was fitted to create a skylight.

Now Lisa turned to interior finishes: kitchen cabinets, an Arts & Crafts tiled fireplace in the family room (in the 1940 section of the house), newly stuccoed walls painted in a Southwestern palette. Bathroom fixtures include a glass sink designed by Lyda, Lisa’s older daughter, who at the time was just 13. Lyda chose the river-rock flooring, Santa Theresa tiles, and Papaya Punch pink for the walls. Where the original kitchen and dining room had been, the new dining room has oak flooring and a built-in buffet with a granite counter from a U.S. quarry. The new kitchen is at the back of the house, where once there was a patio and sunroom.

The yard was landscaped with velvet mesquite and Texas ebony trees, varieties of cactus, summer poppy, desert marigold and primrose. A pair of Sonoran desert tortoises happily inhabits part of the yard.

Except for the fireplace, tile in the house was made by Santa Theresa Tile Works, a unique company that has supported Tucson youth and artists since its founding by artist Susan Gamble in 1986. It’s named for the saint Teresa de Avila (b. 1515), reflecting the company’s female ownership and a Spanish heritage. The brilliant tiles and mosaics are found all around the city. Customers choose from a standard collection or create their own mosaics. There are tile-making workshops as well.

In 2016, Gamble handed the company’s assets over to Imago Dei Middle School, a tuition-free private school for fifth- through eighth-grade children from low-income families. santatheresatileworks.com 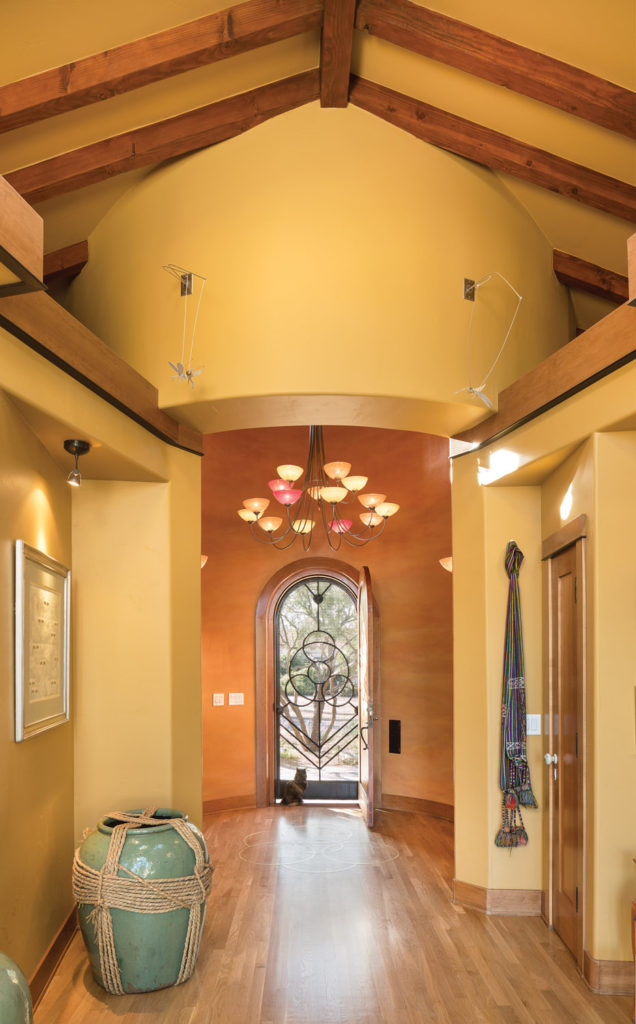