A solitary decrepit house in the middle of a valley in Dutchess County, New York, might seem like a textbook example of Romanticism, with the juxtaposition of beautiful hills and a decaying structure. But to one architect, the house seemed salvageable and the perfect historical home for his client.

Stone House, as it is called today, had been empty for years when Chad Floyd of Centerbrook Architects took on the project. “It had a lot of damage from the weather,” says Floyd. “Water had gotten in, and it was musty and messy, with a lot of rotten wood.” Since the house hadn’t been tight to the rain and snow, there was a lot of material deterioration over time, which meant that only a few parts of the house were usable and reliable. The stone walls were sturdy and in good shape; some of the roof rafters were still usable. Nearly everything else needed to be replaced or entirely reimagined. The chimney mast and the window openings were the remaining major features, thanks to the thick stone walls. 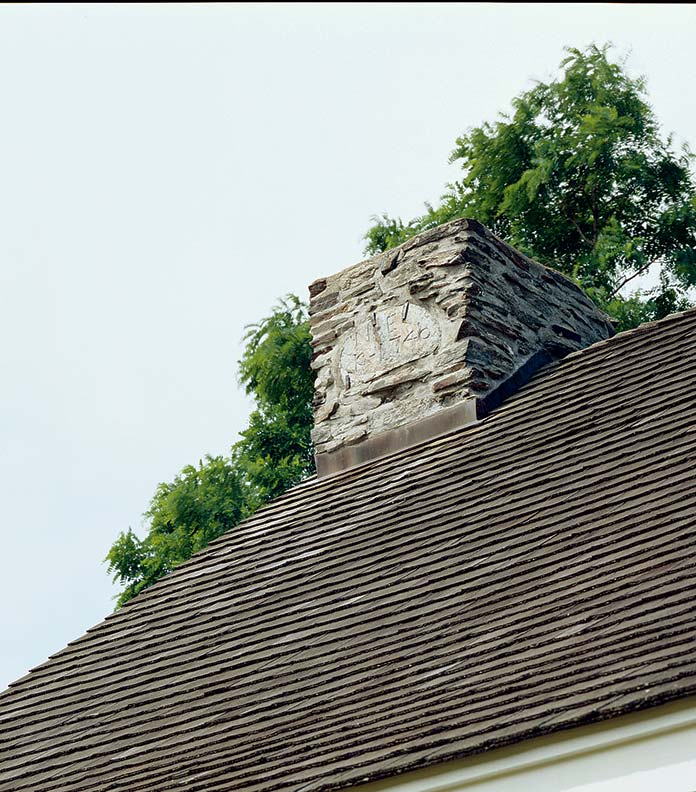 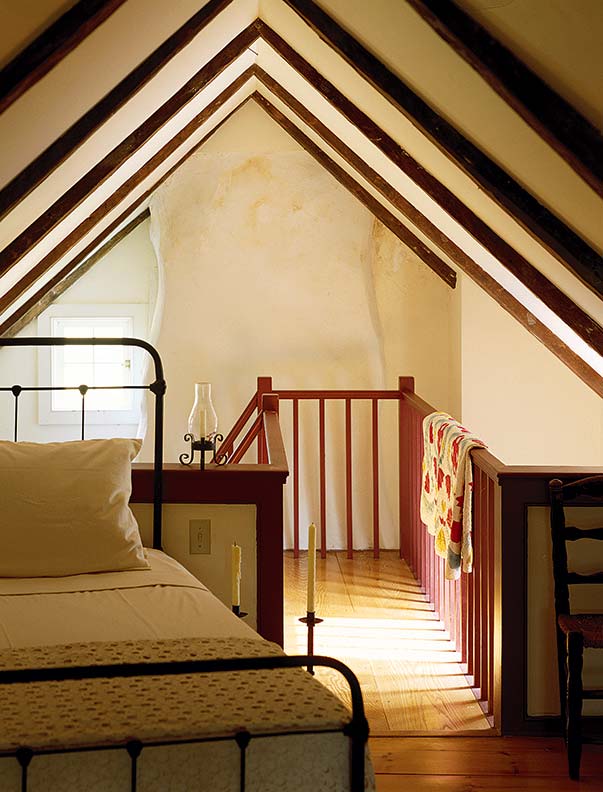 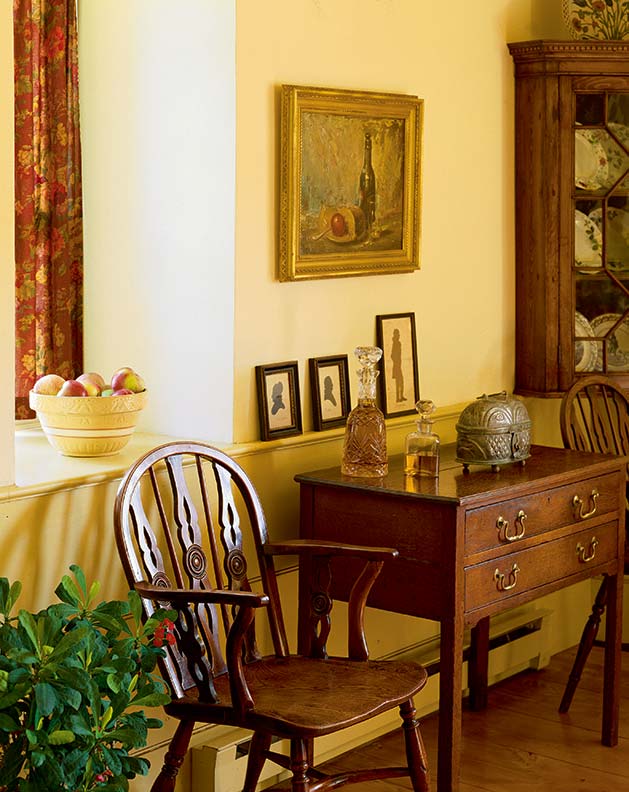 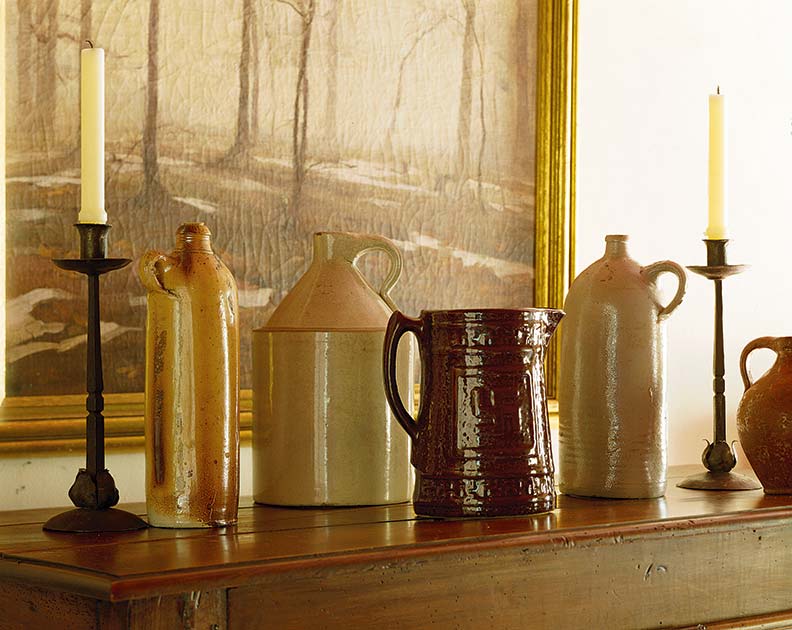 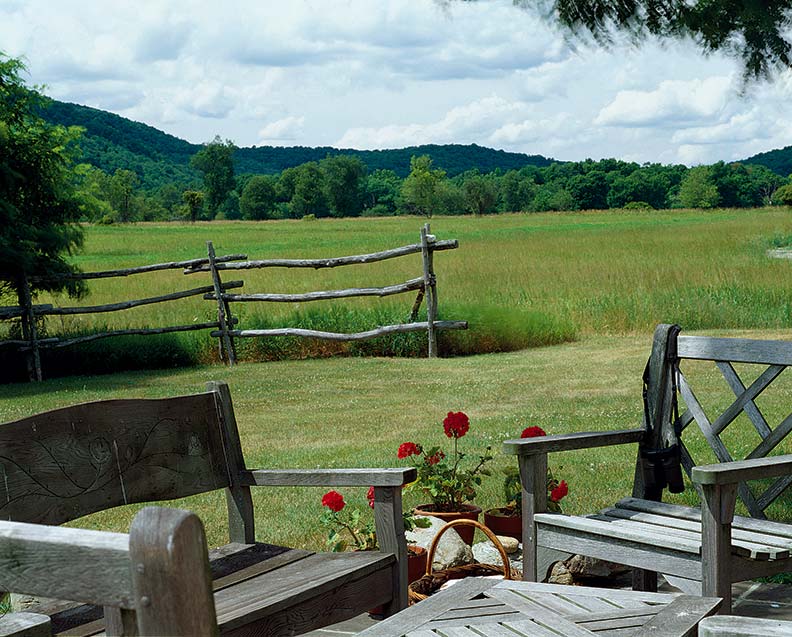 “If the house had been in the middle of the woods, I might have thought about it differently,” says Floyd. Since the 18th-century house is set in a valley meadow, surrounded by fields and a few trees, Floyd decided to retain what he imagined might have been the mindset of the original owners, who would have come to this area, feeling the need to protect themselves from the unknown outside the walls of their home.

“This was wilderness then,” says Floyd, “and the house functioned like a defensive position.” The thick walls and small windows created an inward protective security in the midst of a wild world, and Floyd did not consider altering that inward focus. He wanted to retain the warmth that can result from the secure perimeter that was important when the house was first built. With the stone and the small windows, the activity happens inside the thick walls of the house, not around it.

Unlike a house that sits on the water and requires a large picture window to take in the view, the Stone House sits alone in a field, with beautiful wilderness on all sides. “There’s no need to smear auto glass in one direction,” says Floyd. The setting informed Floyd’s decisions on external expansion and embellishment. He let the house stand as a solitary object in a field, so the openness of the meadow comes right up to the wall of the house. In doing so, he maintained the classical simplicity of the rustic historical structure; the house is an object in a landscape. Floyd states, “It’s absolutely clean, sitting in the middle of a lawn.”

Although Floyd put himself in the 18th-century frame of mind for the project, he did not let the details control every decision. “I didn’t want to be slavish [about the historical details], but I wanted it to end up feeling genuine,” states Floyd. It’s a delicate balance between authenticity and functionality. One modern aspect that would not have been on the house originally but that Floyd thought was important is the terrace. Because of the inward focus of the house, it could too easily feel restrictive.

To combat that possibility, Floyd created a terrace that is modern in its simplicity. The simple stone slab with a small hedge is topped with English garden furniture. The open space draws people out of the cozy house and incorporates the modern freedoms of space and outdoor living that were most likely not the habit of the original occupants. With the added terrace, people can walk out of the house and onto the lawn/meadow, take in the views from outside, and eat dinner outside, something that might not have been contemplated in earlier years.

When Floyd began the project, the structural elements that survived the years of weather damage needed to carry the weight of the new version of the house. “The stone walls themselves speak volumes,” says Floyd. “The windows and door placements were all set. That created a ‘genetic code’ from which it was possible to expand to the other elements.” One of Floyd’s first ambitions was to make the house sound and weathertight. The problem with stone walls is that they look nice and sturdy but allow heat to pass through very easily—stone may have impressive mass, but it doesn’t stop the cold. Once the cold temperature hits outside, it is quickly transmitted indoors.

Floyd had to make the house comfortable and environmentally responsible, so he and the owner decided to make the house’s living space a bit smaller by adding a new interior skin of stud walls that allowed room for insulation and wiring; he covered the new walls with a thin coat of plaster. Although adding a new internal layer made the house even smaller, it had some big payoffs. “The remarkable additional thickness of the wall exaggerates the sense of solidity in the house,” explains Floyd.

By making the interior even smaller, the house gains an extra coziness and intimacy. The thicker walls mean that when the sun comes through the small windows, the rays hit the window returns and reflect a warm glow into the house. The plaster returns are painted yellow, which increases the ochre glow of the sun reflected around the interior of the house, providing more light and warmth than would come in the windows directly. The windows themselves are elegant custom-made double-hung windows with real muntins. They are not the standard store-bought variety, which Floyd says would have cut down on the light entering the house by about 15 percent. “The windows in the Stone House are painted wood windows, not aluminum clad, so the house feels solid, like it should,” states Floyd. Bronze screening comes into play in the warm weather; storm windows keep out the cold in the winter.

The Stone House is not disturbed by modern convenience rooms that are often features in country homes: There is no massive entertainment room with built-in seating or a projection screen, and there is no gigantic country kitchen that opens up to the living spaces. Instead, the house maintains its original structure and individual rooms. Any entertaining is done on a small scale that reflects the history of the house. There are two large fireplaces, but the kitchen is tiny. “It’s really like a pied-á-terre kitchen,” says Floyd. It suits a bachelor or a couple only. He wanted to keep the kitchen minimal and apartment-like, but it is as efficient as possible and suited for intimate dinner parties.

Floyd outfitted the house with details that are in keeping with his 18th-century concept while still creating a usable house for modern inhabitants, taking a few liberties to bring the house into the 21st century. The downstairs is more historically resonant, keeping the small rooms and the original functions; the upstairs is more open and less adherent to its uses in ages past. Floyd found wide pine floorboards when he first examined the damaged house and decided to cover the floors throughout with the same pine boards, maintaining a simple and straightforward look that reflects the house’s history.

Traditional techniques were important to Floyd and influenced his other choices in outfitting the interior. He used wood paneling, but rather than modern-day prefabricated sheets, he and his crew used actual boards to create the paneling. The doors, made in the traditional way, were fitted into openings cut into the horizontal board wall paneling, just as would have been done in the 18th century.

Floyd also chose rich colors, such as burgundy and ochre yellow, for the interiors. The upstairs is a deep maroon color. These vibrant colors, like that found in the bright turquoise blue Dutch door, add life to the confined space but also reflect a historical accuracy. Just as details such as the black iron hinges on the doors add a depth to the house’s history, so do the rich colors and other details, including the baseboards and wainscotting. The baseboards are flat boards with a small bead, giving an understated simplicity to the decor. Another trick to recall the house’s past was to ease the outside corners of the walls—if the corners are too sharp, they will look newly installed, but if they are dulled a little bit, they will look like they belong. “Together with the other details,” says Floyd, “they create a kind of vocabulary in the house that has a texture that people understand and recognize.”

The house is capped by a red cedar shingle roof. The steep pitch of the roof keeps the water and ice damage to a minimum. Fire hazard was the only consideration with the roof (because the house is in the middle of the countryside, an ember that lands on the roof could spell destruction long before the fire department could reach the house). In the end, Floyd opted for authenticity rather than asphalt, but he did install flash suppressors in the chimney to cut down on sparks that might make trouble.

The Stone House was a welcome challenge for Floyd. He developed the project with a sense of what it must have been like living there when the house was first built. “It creates a tableau against which a person who really wants to respond to it can furnish it with a sense of genuineness,” says Floyd. The details required in reimagining the house after its years of damage opened up possibilities that make the house a rich place. “There’s a sense of all that came before, and that’s pretty nice,” says Floyd.